It’s time for another edition of Cooking Games! As you know, I cooked TC a video game themed meal for his birthday a little while ago, and I wanted to share with you course two, inspired by Assassins Creed.

I’ve been playing Assassins Creed for a while. I wasn’t expecting to enjoy it but I’m a huge Italy fan, and, provided I don’t have to kill anyone without being seen, I’m not too bad. AC2 is one of only a handful of video games I’ve played all the way though, and I’m on to Brotherhood now.

I came up with the idea of a hidden blade course quite early on. I considered pasta at first (so I could finally use my pasta machine) before deciding on a simple salad.

But what would be the blade? For a while, the market didn’t have my first choice in stock, so I resigned myself to cooking swordfish. But on the day of my shop, I tracked down a stall selling what I really wanted to cook: razor clams.

I had never cooked razor clams before, and have merely been present while others cooked mussels, so this was a definite step into the unknown. From what the Internet said, they weren’t too tricky.

What they were was weird. Like all shellfish, they’re kept alive until they’re cooked. And unlike mussels, which just open and close… razor clams ooze. They don’t stay inside their shells, but squirm out, and to check that they’re alive you poke the bit that sticks out to see if it wriggles back in. I was also terrified that they’d die in the fridge – left, as advised, wrapped in damp tissue paper and not in an airtight bag – so I checked on them periodically throughout the day.

Having no idea of the serving size, I bought 10 clams to serve both of us. I think I wasted a ton of the meat, as rather than just removing the “black vein”, I just cut off the cleaner looking half of the clam (the “foot”) and chopped it up a bit. I was kind of fed up with cooking by then and just wanted to eat…

The clams are pretty tasty – quite similar to scallops. I can imagine being a bit more creative next time I cook with them, but I’m glad I kept it simple so we actually got to taste them.

The salad is nice and simple but the presentation and dressing class it up a bit. If you like, you can witter on over dinner that the lettuce is the blade’s sheath, the tomatoes represent the blood spilled, the cucumber is cut into smaller blades and the spring onion is… the… tears shed? Because onion makes you cry?

Or you can just say it’s a salad. 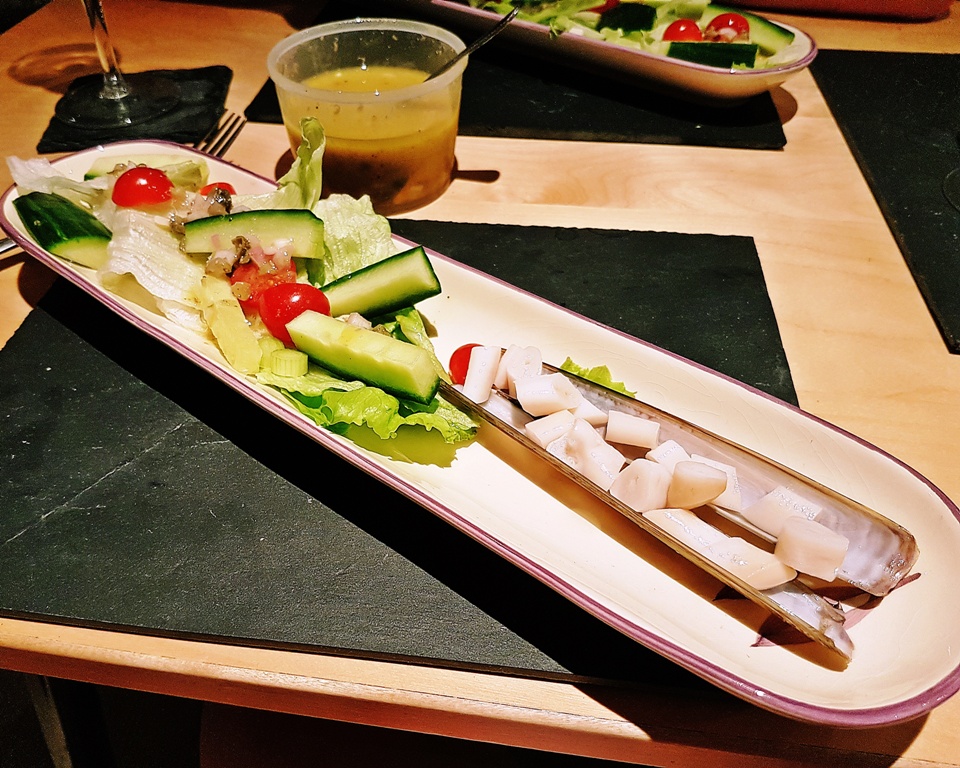 Serves 2 as a starter.

1. Chop the garlic, shallot and capers finely. Place into a small tupperware pot with a tight fitting lid.

2. Pour in the olive oil and lemon juice and add salt and pepper to taste.

3. Place the lid on the dressing pot and shake vigarously.

4. Tear the lettuce roughly. Chop the tomatoes in half, the cucumber into batons and thinly slice the spring onion. Arrange on a rectangular plate.

5. Check all the clams are still alive and discard any that aren’t. Rinse under cold water (don’t soak – they’ll drown!).

6. Boil water in a large saucepan. Chuck the clams in. Try not to imagine them screaming.

7. When all the shells have opened (1-3 minutes) they’re done. Drain them and run cold water over them to stop them cooking. Reserve a couple of the shells for presentation.

8. Chop the fleshier part of the clam (the bit that had been oozing out earlier) into 1cm slices.

9. Place a clam shell on each plate and arrange the sliced clam on top.

10. Give the dressing another shake and drizzle it over the salad and clam. Serve. 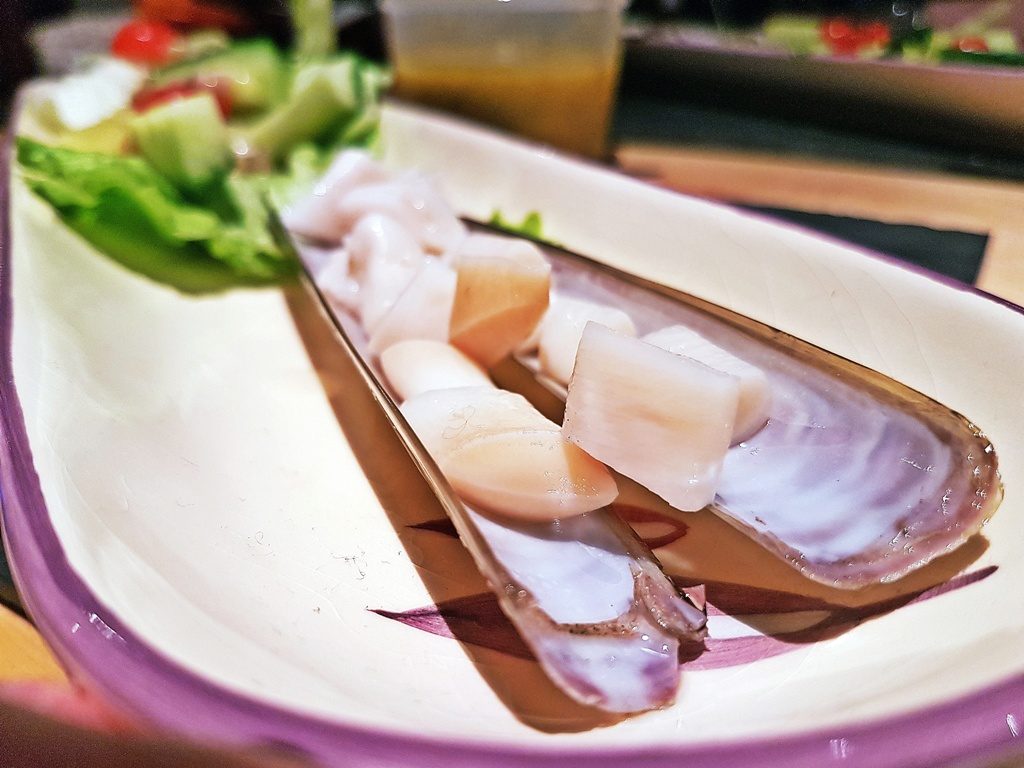 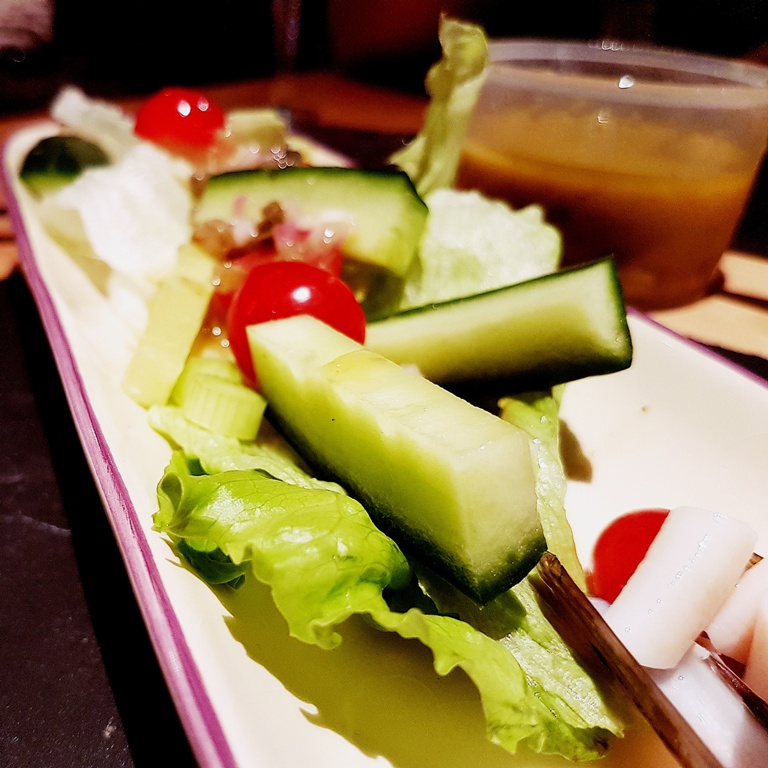 Have you had razor clams before? Do you think this is suitably Assassin’s Creed?

So, in case you missed it, I recently cooked TC a birthday meal. A meal of epic proportions. It was...