On Saturday 1st July, over 600 people around the world played the same megagame.

The game was based at 11 different locations around Europe and North America, with each location representing a different US state that was dealing with a zombie outbreak.

I was Press Control for the day, and rather than write up a traditional After Action Report – tricky considering I saw hardly any of the actual in-game activity – I’m going to take a look at how the game was developed, and how Press functioned, as well as share some of my favourite news stories from the day.

Here are some of the highlights from the live video I recorded on the day:

The game was masterminded by game designer Jim Wallman, who first created Urban Nightmare in 2012 as an ordinary crisis management style megagame. The setting was a single city, Romero City, in a single US state, Michigan. The second run was actually TC’s first megagame, and he ran a version of it in Leeds as well last year, where I was a member of the Press player team. 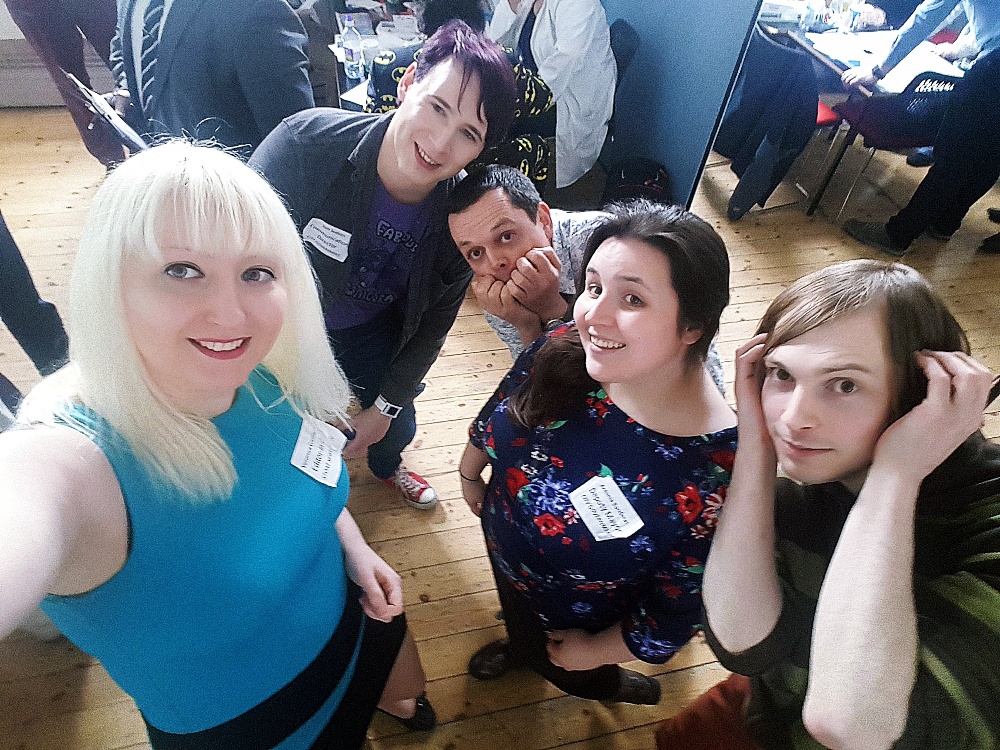 The original game was closed-map, meaning all of the mechanics were completely hidden from the players. Player teams representing the police, emergency services and national guard wrote down their orders and handed them to control, who moved counters on the map and rolled dice to determine the outcome of conflicts. Meanwhile political players at the city (mayor) and state (governor) level tried their hardest to position themselves well, despite the drama going on around them.

Jim first suggested running a multi-venue game back in April 2016. He reached out to a number of different megagaming groups across the country to see how many sites would be interested in hosting. Pennine Megagames were natch keen to get on board, and I had an eye on Press from the start. 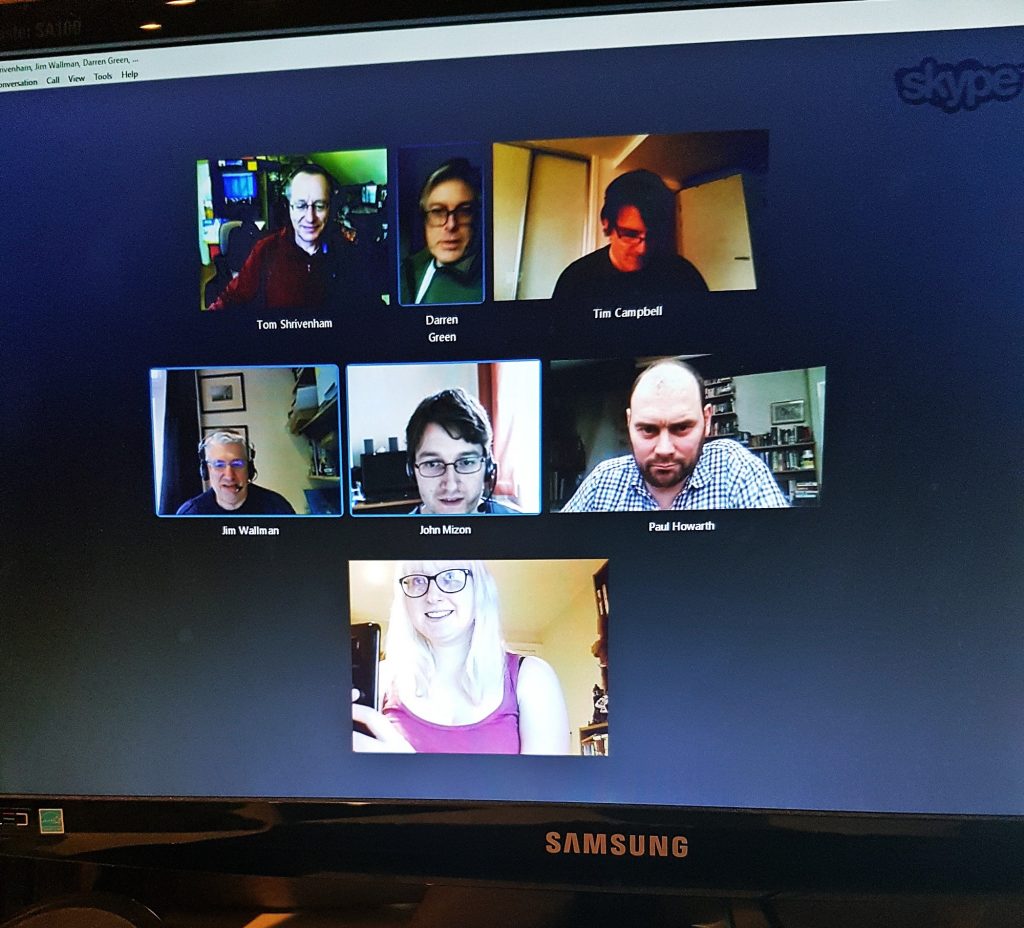 A number of other groups in the UK were keen to get involved, including Southampton, Cambridge and Bristol. The Netherlands came on board too – they have a strong megagaming community over there – but the struggle came when considering our neighbours across the Atlantic. With a 5 hour time difference or more between us, would it be feasible to run a game concurrently with them?

Well there were groups in New York and Texas who were pretty damn keen to get involved! So we shifted the timetable an hour later, and agreed they’d join us on Turn 2. We even found a group in Canada who wanted to represent in-game “Northland”.

With the different groups on board, Jim had the go-ahead to start creating this crazy-massive endeavour…

The State of Chaos

Turning Urban Nightmare into a WAM meant simplifying the rules massively. A closed-map is incredibly control-intensive, so Jim overhauled the lengthy handbook into “Rule Cards”, which could only be read the first time a particular unit interacted with a zombie horde. Each different counter had completely different effectiveness when pitted against the undead, and players were pretty unlikely to know what type of troops would be most effective – considering they hadn’t actually fought zombies before!

The games themselves were scaled up in terms of scope. Rather than a single city in each state, there would now be five cities. This meant the division of state-level resources would be much more realistic, with state police and National Guard teams having to divide their efforts between the multiple locations. 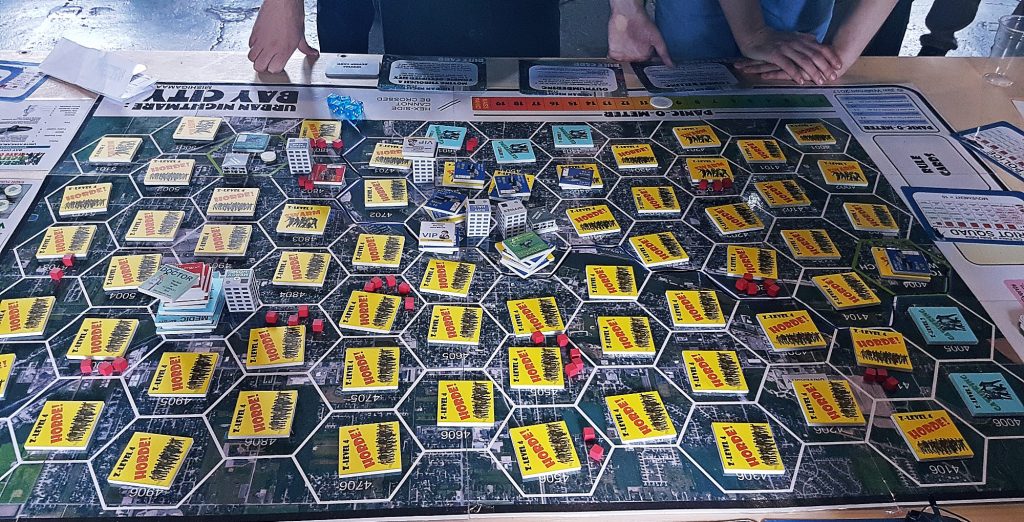 It also gave rise to one of the more controversial aspects of the game – the Election game. Players were given Vote Cards at the start of the game, and lost them when they lost face due to in-game actions. Holding Vote Cards indicated you had sway over a group of the electorate, rather than meaning you literally held multiple votes. In one of the last few turns, players could cast these votes on one of the many (weirdly) electable positions according to American politics: at the City level, Mayor, Chief of Police and Chief of Emergency Services, and Governor at the State Level.

This aspect is a little controversial IMO because winning an election near the end of a megagame feels a bit too much like winning the megagame. And I say this having become Mayor during City of Shadows! But it was very important to keep a high level of tension between different players. Forcing them to want to look good to voters (or better than their competitors) was a very good way of doing this. 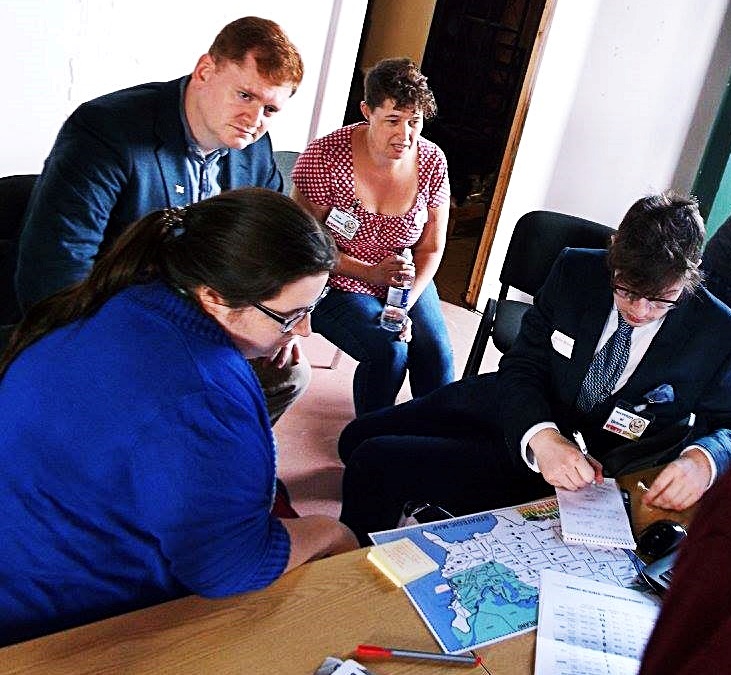 The Presidential election nominations, and assigning all players a Democratic or Republican bias, also added to the inter-player cooperation issues.

And the most crucial part of the WAM was the inter-game communication system. Many different tools were suggested – from Skype, to Facebook, to Slack, to WhatsApp. Eventually, Jim decided to go with a simple email system. Players who would need to communicate cross-game would be given email accounts and a list of people they could contact. Anyone without an email account would need to go through the proper channels – i.e. Mayors didn’t have a direct line to the President!

The Control team also used this email system to keep the other sites updated with in-game information, such as the movement of zombies or troops across state borders. But mostly this was a back up – the players were ideally communicating all of this themselves. 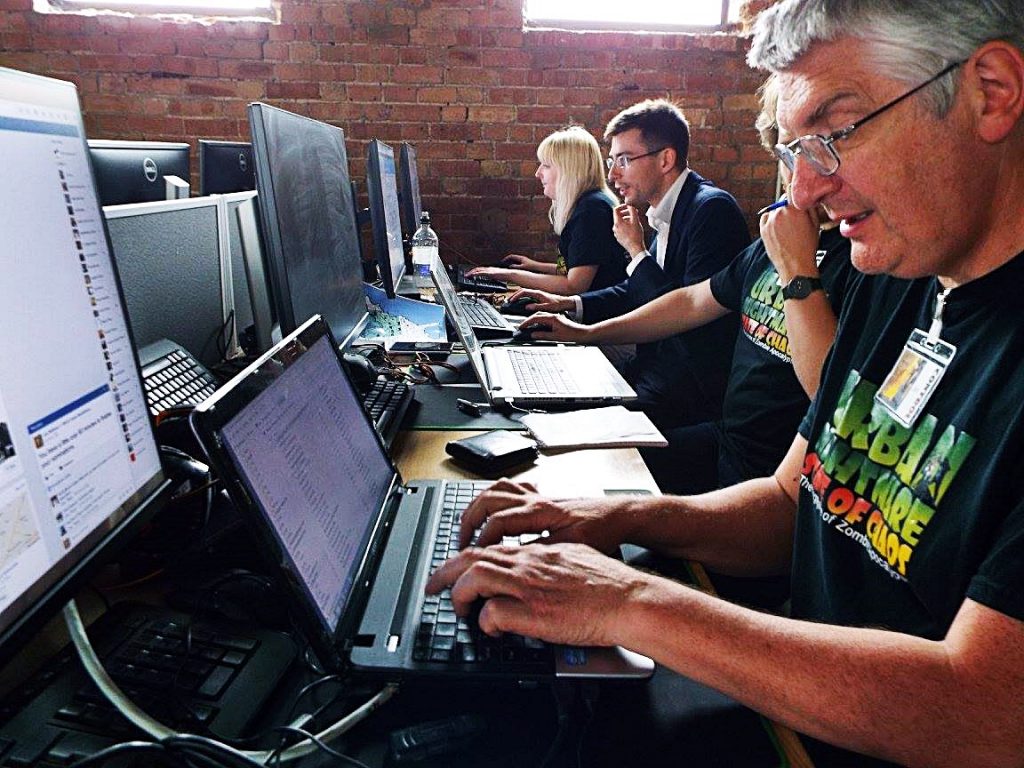 And another key aspect of keeping the games connected as one single game was, of course, the Press!

Press at the WAM

I firmly believe that the press game was one of the linchpins that turned it from 12 separate games (including the Federal game) into one combined experience. 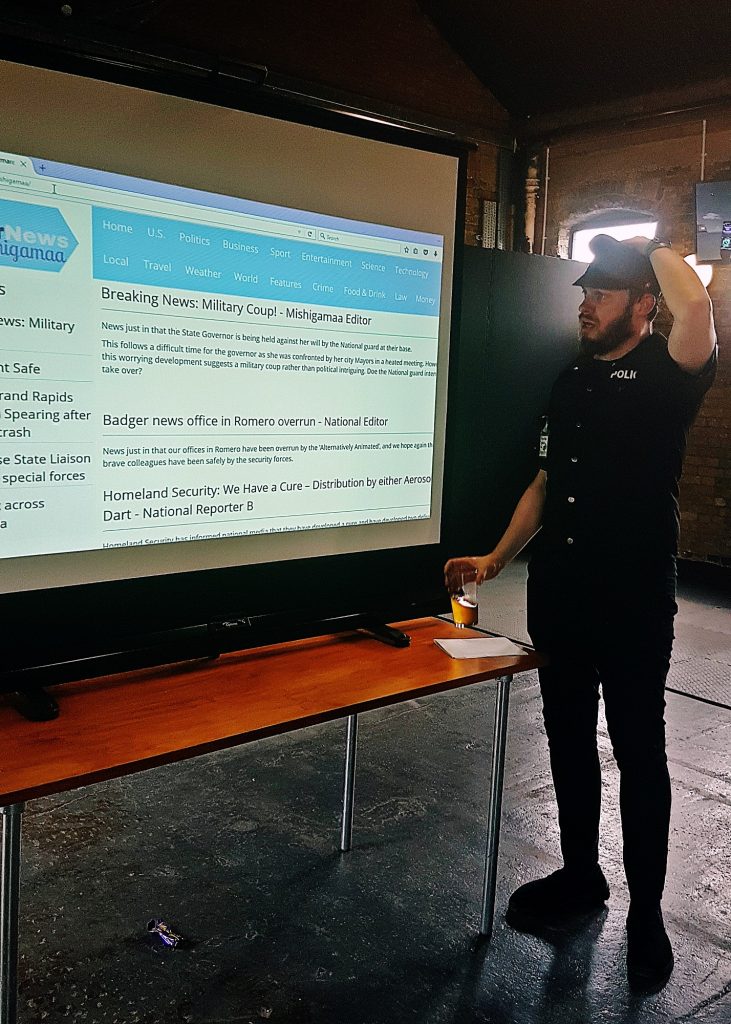 Each location had their own local press team, who were responsible for collecting news at their location and reporting it on the press website. Articles could be lengthy editorial or just the headline and the basics – it was completely up to each player what sort of journalism they wanted to go for. The game in London, where I was based, was host to the state of Mishigamaa, and the Badger News Team there was composed of two incredibly hard working journalists: 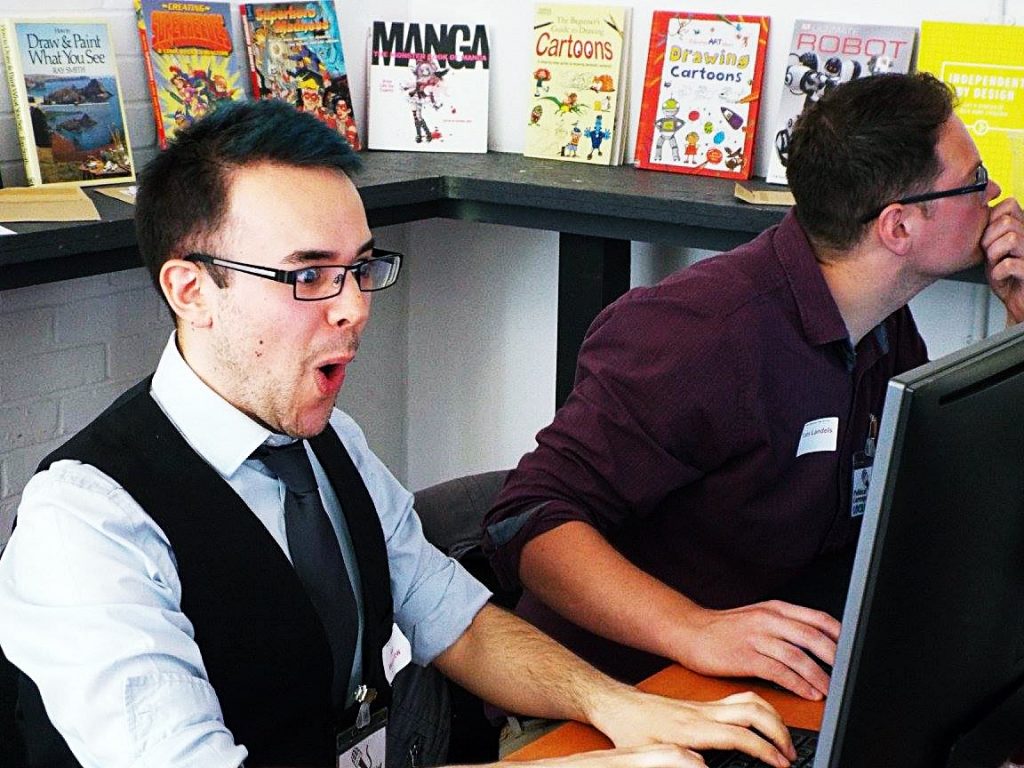 The National Press Team was also based at my game. They had a slightly different role. While they could write stories themselves, both about the co-located Federal Team, as well as any trends or major news they witnessed themselves, they were also responsible for selecting the important news from the different state games and posting it to the National Feed, which was shown to all locations. 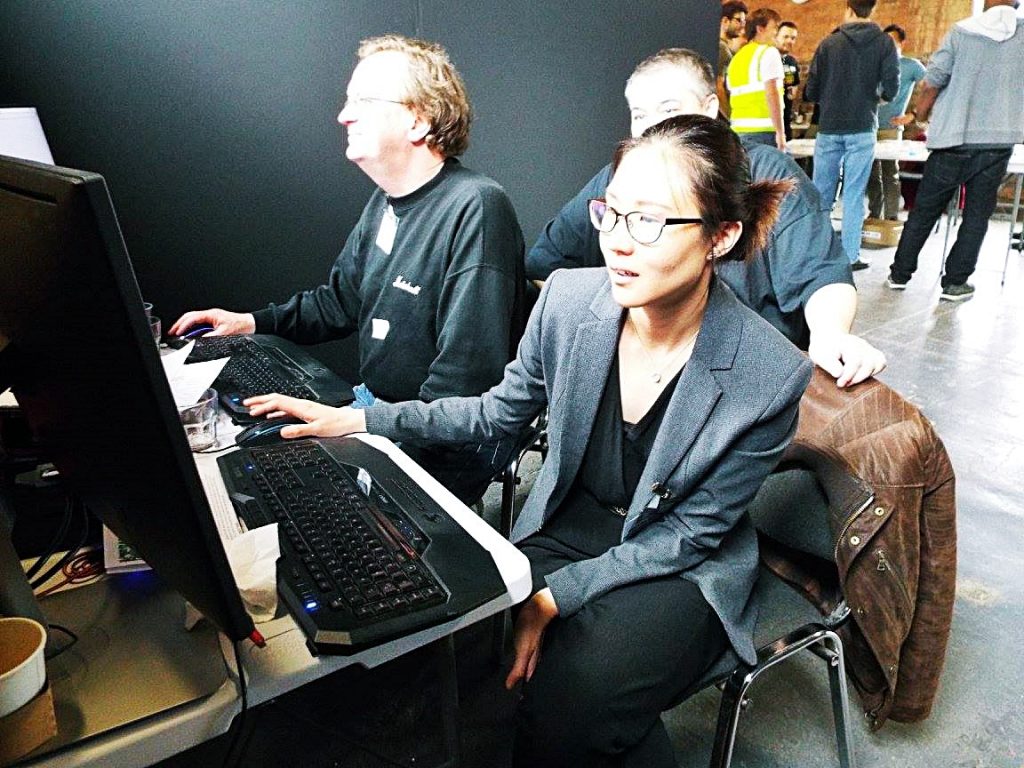 I designed the Press Website myself (in hospital, I might add!) and created a manual so all the players could (hopefully) get up to speed with the logistics of using it quickly and easily, and move onto the tougher task of writing solid articles.

The site itself had some bugs that unfortunately didn’t rear their heads until the day. The stress of being viewed by so many people simultaneously, as well as needing to be consta-refreshed to show the latest news, meant that frequently the site was showing an error… and unfortunately, I didn’t have 500 people on hand to stress-test the website in advance, so the problem couldn’t have been anticipated. (Can I also brag that I managed to design the website while in hospital for three days!)

As Press Control I was pretty removed from the game itself, and most of my interaction was with the Press website itself. I still see visions of “Resource Limit Reached” when I close my eyes… 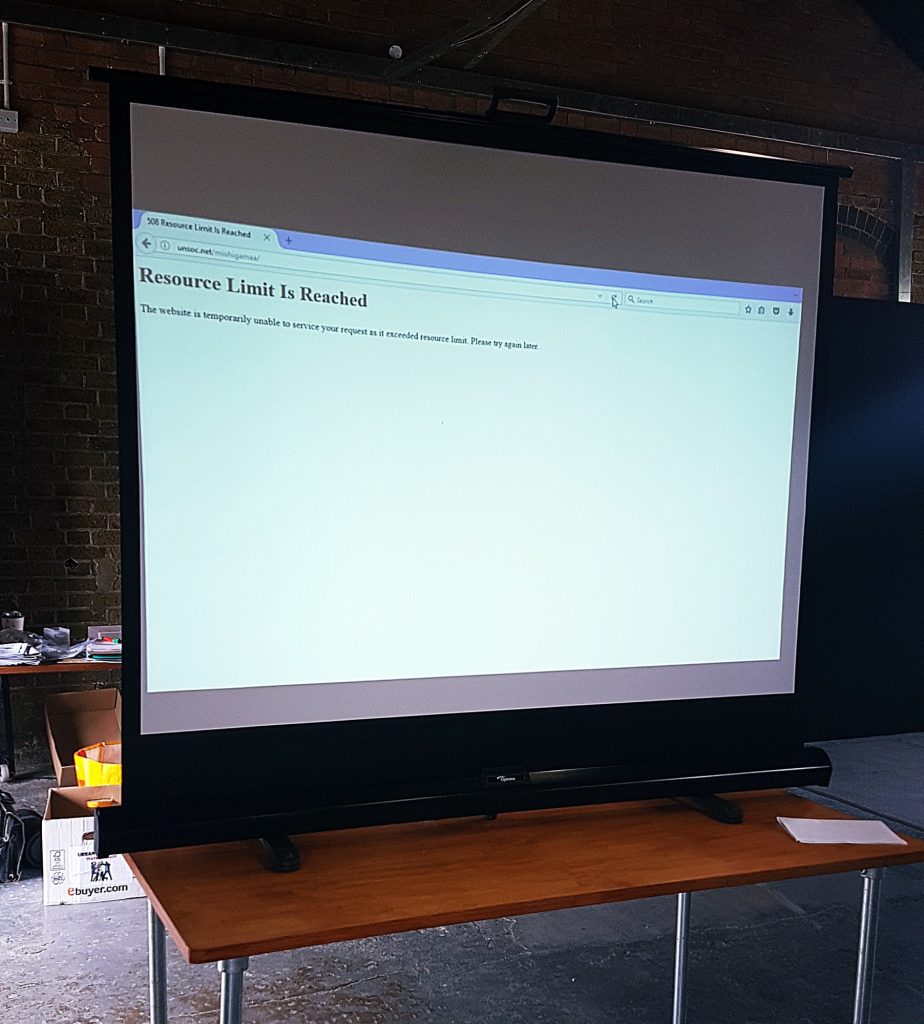 We had over 600 articles published by about 40 press players across the different sites, a truly impressive catalogue of what the hell happened. The website is still up if you want to go read the entire chronicle.

But I wanted to highlight some of the most diverse, random and amusing stories from the day.

GenCon will apparently be going ahead despite the outbreak

Drink because they mentioned the game title in this article!

Sport is the solution to zombie-ness

Is it technically possible to capture a “living” zombie?

There’s always someone who wants to interview a zombie

Nothing like a bit of advertising in our time of need

The “Z-word” was banned by the White House, and many press articles refused to use it for the duration of the game

Leak from the White House

The first (of about a million) articles claiming a Zombie Cure

If it couldn’t get any worse, there’s an undead crocodile

An entire state falls to the zombies, and a mention of covfefe

Because what is the news without memes

A zombie outbreak isn’t enough to deal with, we also have a banking hack?

The first of many accusations that Nutrivend was behind it all

And now Weygand AND the Government are behind it!

Because religion is the most important thing in America

Be careful what you say around Press players, they may quote you on that

Our press players are far above photoshopping any images…

I wouldn’t put it past control to put a fake cure card in the game, just to screw with the press

“We don’t care about politics, so elect us”

The thrilling news we were all desperate to hear

Wabash overrun, and all the other games suddenly feel like they’re not doing a bad job

Yeah, I told you that cure thing wouldn’t pan out…

And after all that, your house prices are falling

Overall I really enjoyed being involved in the first ever WAM. The game itself was really enjoyable, according to player reports, and the WAM elements, while having some teething problems, definitely added to the game’s atmosphere.

Here’s to the next WAM, whoever is mad enough to design it!

My next megagame is The Pirate Republic, 19th August in Manchester. Sign up is here.

One of the many issues with running Megagames in real world settings (or even well-established fictional settings) is that people...