Last time on the blog, we talked about the first half of the Spanish Road megagame, in which, as Queen Elizabeth, I was forced into naming the son of a traitor as my heir, ordered a failed recapture of Calais and had an incredibly awesome yet inconvenient outfit on.

As we left it, I had just been excommunicated by the Pope, but I was hopeful that this wouldn’t lead to mass invasion by any Catholics…

One of my aims in my briefing was “intervene on the Continent for limited ends and keep Spain and France disorganised and on the back foot. Ensure that they never come together to threaten England.”

Well, they did, and so did Portugal. DAMMIT.

In the same turn, all three countries declared war on me. We rushed our ships back from the New World. We quickly upgraded many privateers to squadrons. We employed mercenaries and raised militia and crossed our fingers. 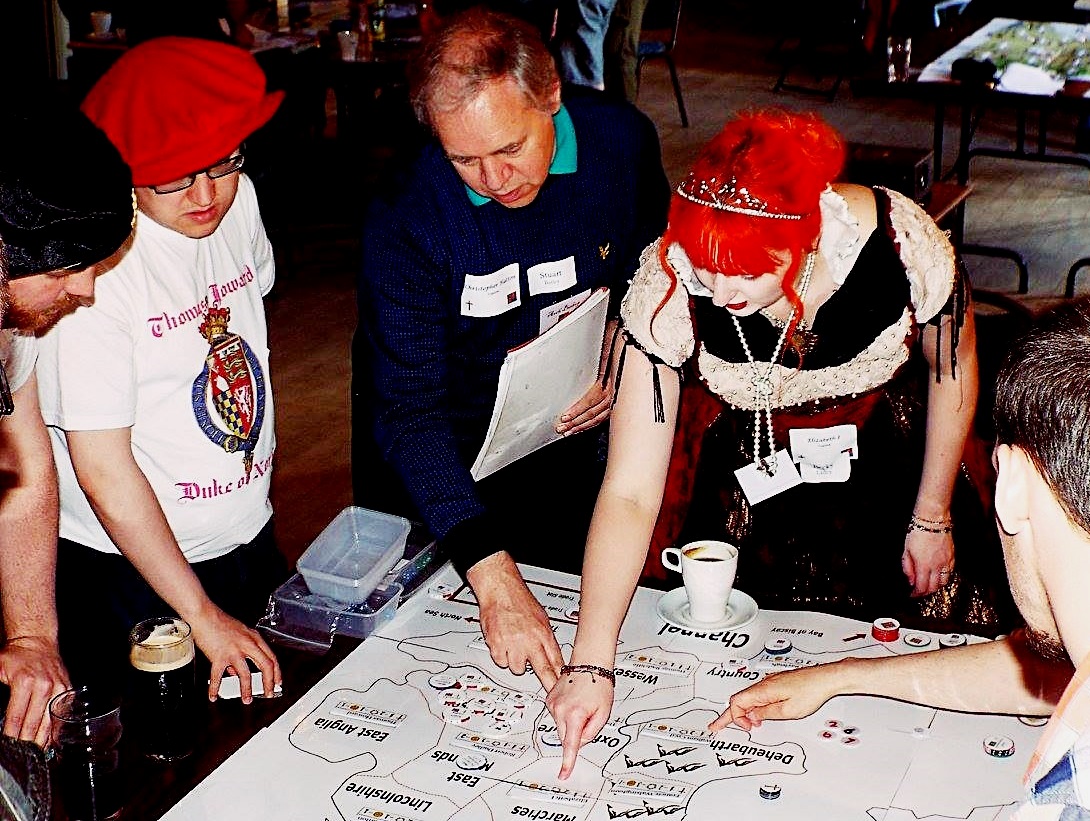 It didn’t take the French and Portuguese armies long to take London. We fled, but not far, and while my councillors pressed me to escape to Ireland, while Robert Dudley proposed to me and promised to take me across the seas to safety… I was an English queen, and dammit if these foreigners were going to drive me from my sovereign soil. I stuck it out, only a few miles from their armies.

The first task was to make peace with the Pope. In a mix of good and bad fortunes, the Pope who had excommunicated me had died. Actually four Popes died over the course of the game, which may seem a little unrealistic, but apparently they didn’t last very long in those days. The trouble was, while the cardinals were in conclave, there was no way of me being re-communicated. And the Pope we ended up with might be even more anti-Liz than the last!

For some reason the Spanish hadn’t turned up, so I sent an ambassador to find out what the hell went on. It turned out they weren’t entirely sure who had declared war on us, but they had no intention of actually coming and invading, so we were safe from them. 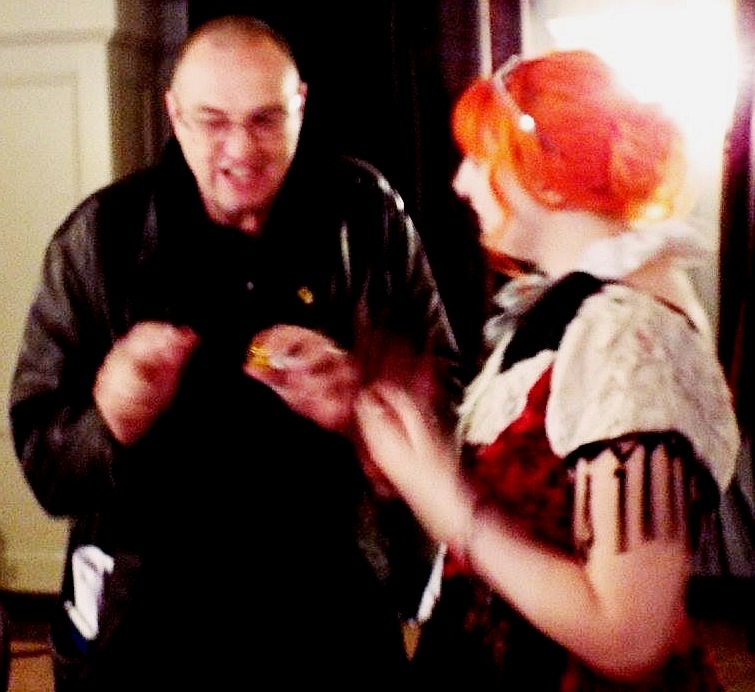 “Tell me some good news, Walsingham”

Next, to deal with was the French. I had overheard the current regent talking to someone about an assassination card, and then refused to deal with my councillors, insisting on talking to me directly. NO WAY IN HELL was I going to go meet with him. He was only a regent, why was he so special?

Luckily, around this time a Papal envoy turned up, announcing I had been recommunicated providing I agreed to some terms. I expected to have to change my country’s religious policy to tolerant of Catholics, if not having to convert or something myself. Instead, they said I had to be neutral to Catholics. I WAS NEUTRAL ALREADY. I agreed.

Thankfully, that Papal envoy paid off the Portuguese troops and they left our shores.

Now back to France. My meetings with the regent were not going well. We had it down to one trade spot in the Channel, relinquishing all rights to the territories of Le Havre and Calais in France, and marrying myself or one of my heirs to a Frenchman to secure a lasting peace.

The Frenchman proposed was one I had been considering earlier – Henry of Navarre, a Protestant and heir to the French throne. Unfortunately, it turned out he was married, so our negotiations stalled.

Then the king himself, newly come of age, turned up. He finally persuaded his diplomats to drop the issue of marriage – the point I had been sticking on hardest. Instead we gave up two trade slots (quite a hit to our economy) and the claims on France – which meant I was now styled as the Queen of England and Ireland, dropping the France. It was a dreadful blow.

With peace declared on all fronts, it was time for our council to regroup and work out what we had left in our tattered country.

It was not looking good. We were skint, we had lost much of our advantage in the New World and our reclamation of Ireland had stalled. The Duke of Tuscany (Mary Queen of Scot’s father-in-law) was hovering off coast, making me very nervous indeed. I checked repeatedly with Control that no one had declared war on us.

Slowly, England rebuilt itself. This was the lowest point of the day – it seemed difficult for us to play any real part in the world. 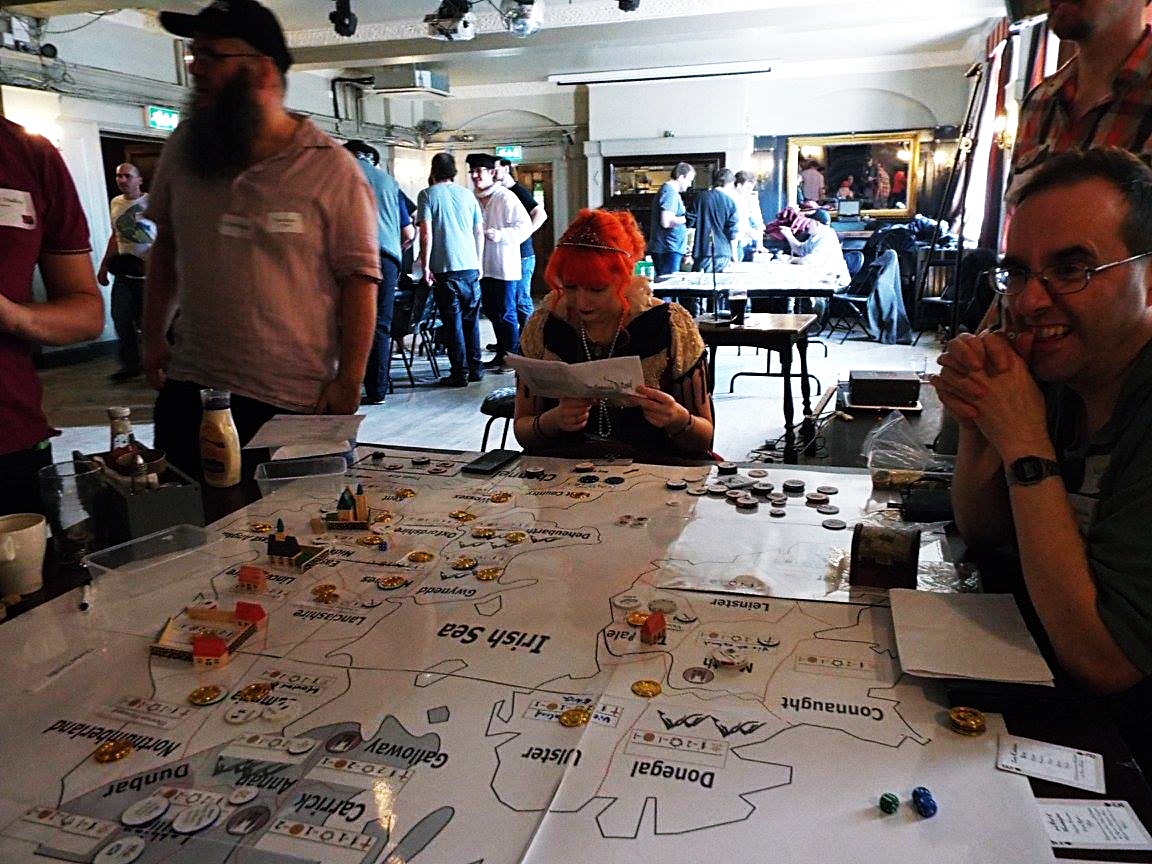 Next followed a series of attempts on my heir’s life (which I turned a blind eye to) while I tried in vain to find him a Protestant princess to marry. Unfortunately Protestant children were few and far between, and a daughter born to Electoral Palatinate didn’t seem enough of a prize.

Some representatives from the Netherlands arrived at one point, seeking a Protestant queen for their state. They were looking for a figurehead to do nothing and not interfere – sounded perfect for me. Somehow real negotiations never actually got underway, unfortunately, but Queen of England, Ireland and the Netherlands has a certain ring to it, doesn’t it?

While we had been engaged in our European squabbles, two players who had died in their first roles had been given roles as Irish Earls. O’Neil and O’Donnell were firm enemies of each other, and viewed themselves each as the rightful Viceroy of Ireland. They were happy to swear allegiance to me and to England, but hated the other.

Unfortunately, my Viceroy of Ireland had recently died, and so I named Howard the new Viceroy and, temporarily, General, promising to make the title permanent if he did well. Howard was pleased, and so was Walsingham – an incredibly rare feat. 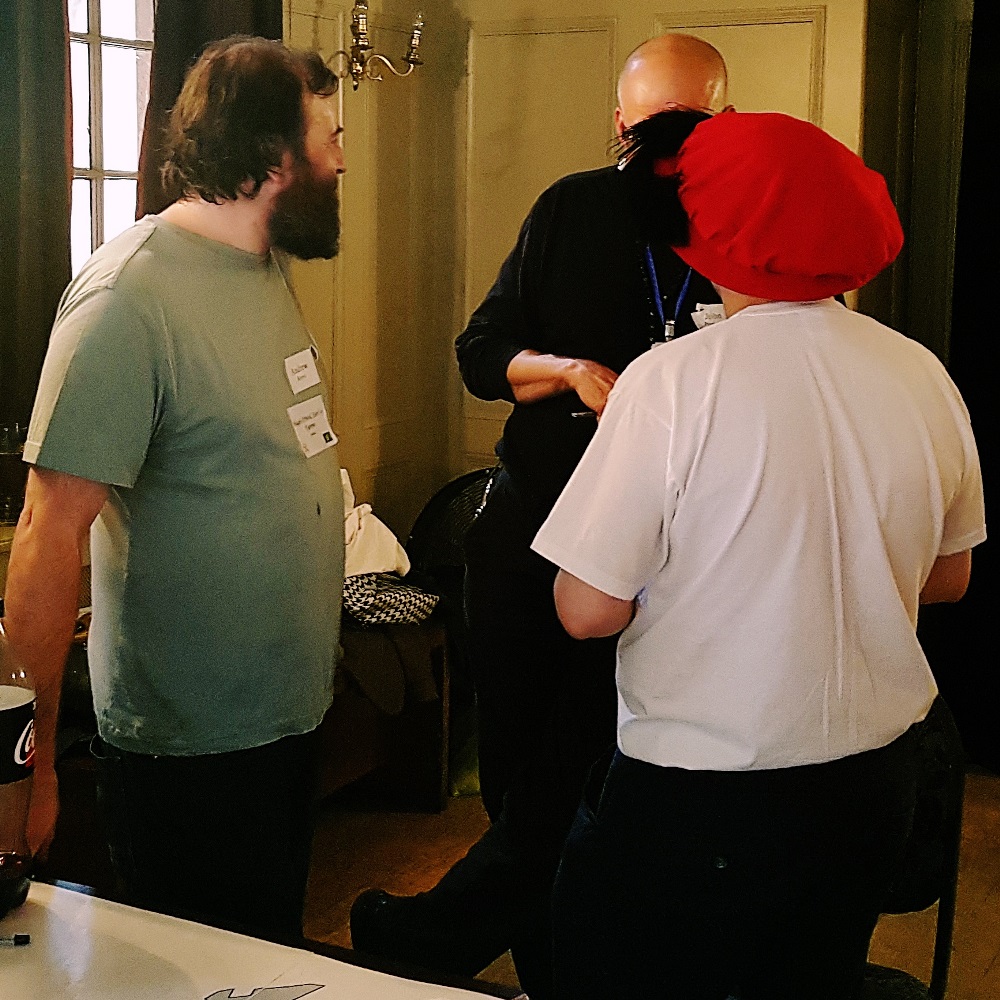 Howard entered into negotiations with the Earls, and came out suggesting that we enoble them both, with the intention of turning on one or the other of them when we had recovered our troops for a turn or so. What kind of General do you call that? Walsingham was hugely unimpressed, wanting to take the entire country by force, and ashamed of Howard’s pacifism.

I knew that to make an occupation of Ireland stick, we would need to have some of their native leaders on side. I asked O’Neil to return the territory of Meath, a province he had snatched from us when we were engaged in the big invasion. He refused. I told him that I was happy to enoble both of them, but I wanted three of the Ireland territories and they could have one each. He refused.

I ordered O’Donnell to kneel before me, and named him Duke of Munster. I had just ordered Howard to take the newly created Duke with him to war against O’Neil when… the game end was called.

The game wrap up was done in the awesome theatre.

I was so desperate to get out of my costume that I shouted to TC across the hall “come get me naked”. This earned me quite a few odd looks but hey, I’d been a virgin for the past 20 years, they could get over it. 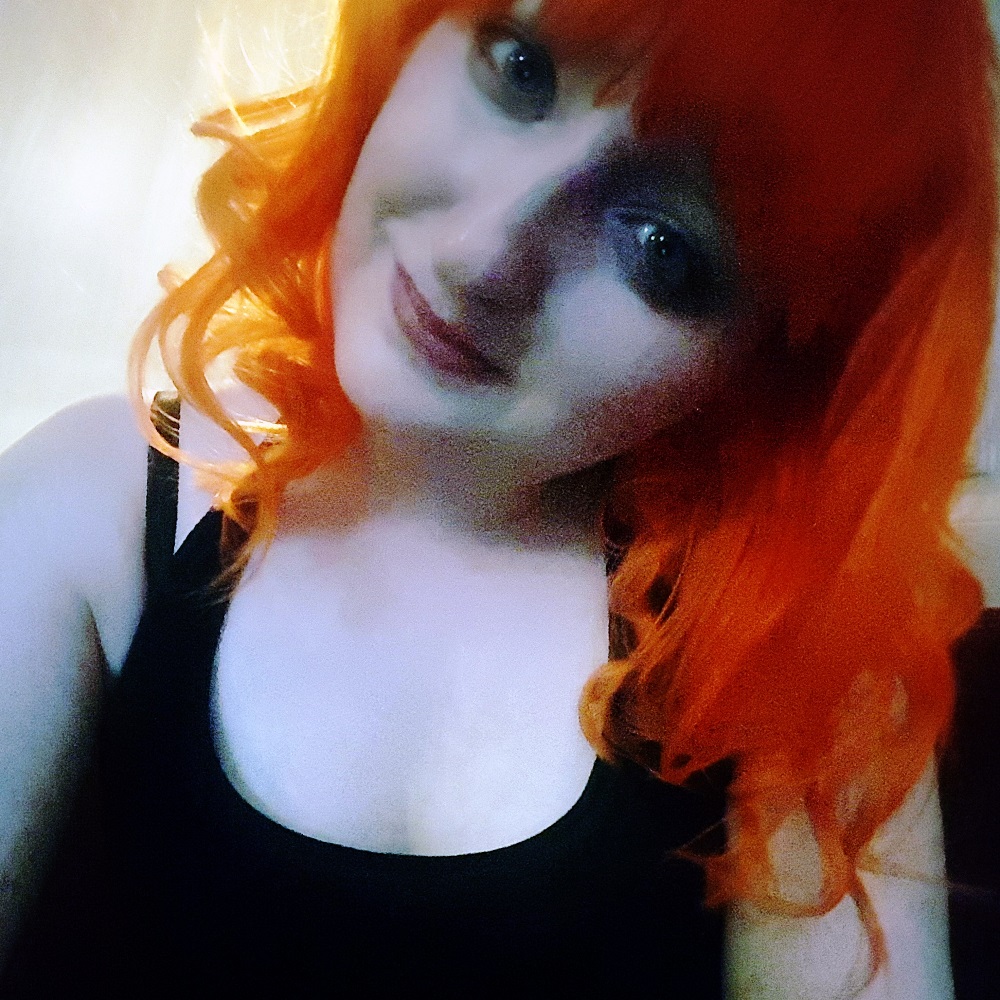 Dressed like a 21st century girl again, we packed up the game and headed to the bar downstairs to discuss the many dramas. There, I discovered that HOWARD had been the orchestrator of the Great Invasion of England, bribing armies to come to our shores, and that both Howard and Neville had been receiving a pension from the rich Portuguese. 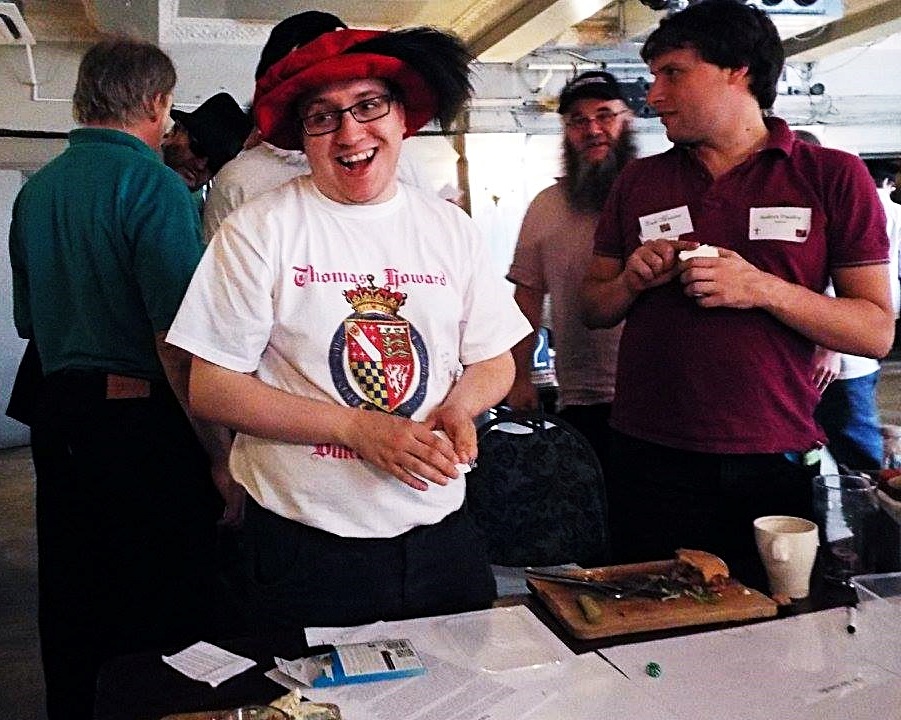 I discovered that William of Orange genuinely thought to marry me, and that if Walsingham hadn’t killed his wife there were many others planning to, in order to get us together.

I discovered that the Duke of Tuscany was never planning to invade on behalf of Mary Queen of Scots, and in fact was seeing if he could help us English fight off invaders.

But yeah, being a Renaissance Queen is hard work. You can’t really trust anyone, and you have to wear these silly outfits (no wonder women didn’t achieve as much as men back then, and I wasn’t even wearing a proper corset!). I’m happy sticking to my day job to be honest! 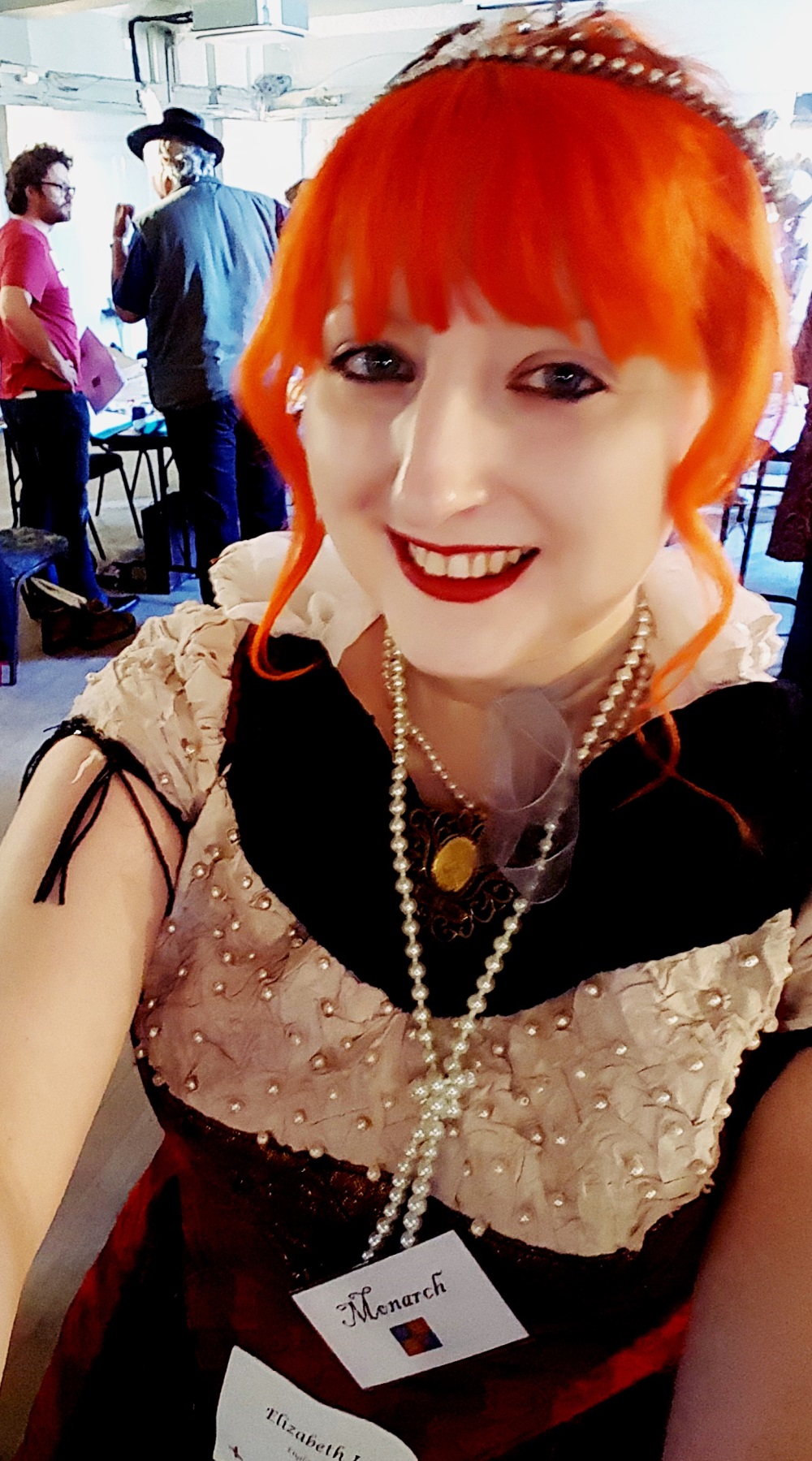 It was a game of massive amounts of betrayal, and even more amounts of fun. It’s definitely going on my list of best Megagames ever, and it’s making me look all the more forward to my game this November!

The next Megagame coming up is Dungeons of Yendor on 20th August in Manchester – think D&D but rather than sending a band of intrepid adventurers the King is sending in the army. Then Not Over By Christmas is on 10th September in London – the war that never happened between NATO and Russia in the 1980s. Book! Come! Play!