Top Posts
How to Moulin Rouge, Secret Cinema Style
7 Habits of Highly Effective Megagamers
Our Finest Hour: Leeds Escape Room by Escape...
Urban Nightmare: State of Chaos – the First...
How to Write a Megagame Part 1: Choosing...
Game of Alchemy, and Megagames vs LARPs
Goodbye Everybody Dies…
How to Write a Megagame Part 3: Scoping
Undeniable Victory: Megagame Report
Ladies Who Megagame
Home Game Design How To Not Panic Before Your Megagame

How To Not Panic Before Your Megagame

There’s soooo much stuff to do. Some of it is the fun stuff. Coming up with cool mechanics and writing setting fluff and stuff like that.

But some of it is distinctly less sexy. Stuff like making counters, remembering to order dice off Amazon, and making sure all the text in your handbook is the same size and font.

If you’re writing a megagame, I bet you won’t need any help with the first load of stuff, the fun stuff. That fun stuff is probably why you decided to write a megagame in the first place.

But you will absolutely underestimate the second load. So this blog is here to tell you… well, mostly everything that went wrong for me running my megagames.

Now move it forward four weeks. That’s when your stuff is going to print.

Yes, your deadline will absolutely slip. But it’s better if it slips when you leave in that much wiggle room, rather than coming crashing into your game.

2. Write down a big long list of EVERYTHING you need.

And I mean everything, right down to your laptop, the presentation on your laptop, a stapler, tea and coffee…. and all the more obvious stuff like handbooks and maps. Put four checkmark columns next to them: Finished, Ordered, Sorted and Packed. 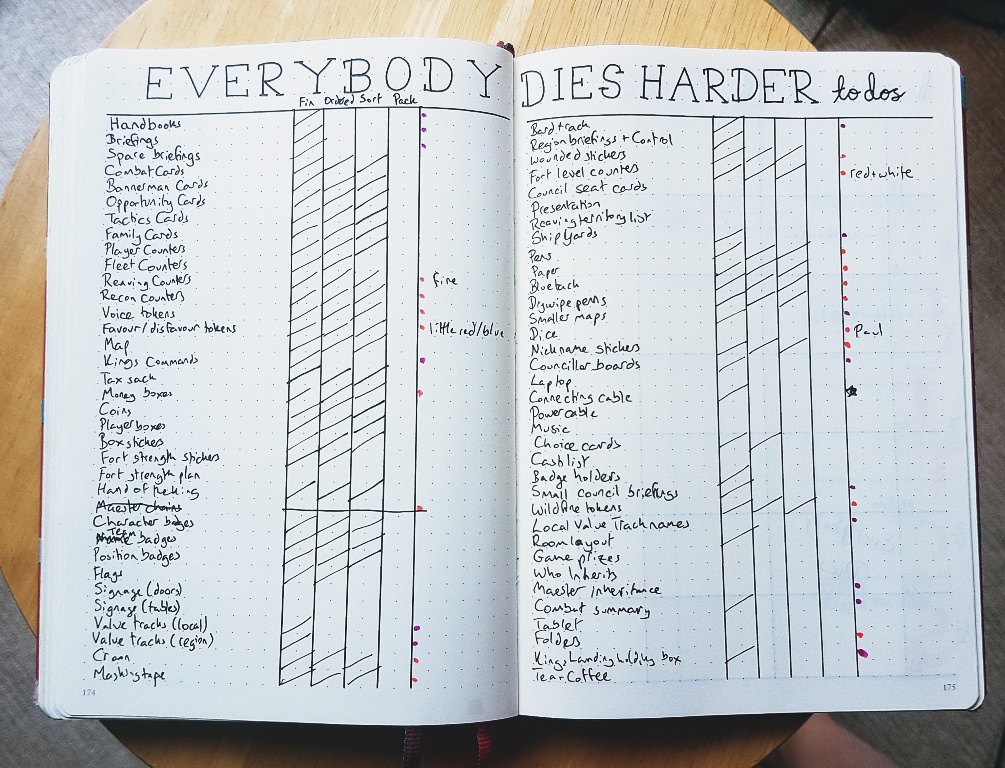 I then use coloured dots to set waves of deadlines. First print deadline (for counters and cards). Second print deadline (for handbooks). Amazon shop deadline. Etc. And never fill anything in on the packing column until the evening before the game, when you actually pack it all into your car/suitcase/boyfriend.

3. Get your handbooks proofread

Ideally as much as possible. Ideally by all your Control, plus

It’s a big ask. Buy them a pizza or something.

(I owe a lot of people pizza.)

Okay, tons of people will disregard this and choose to do all the printing themselves to save costs. But for me, sending it away meant my time was freed up to write more briefings, pack boxes for players, and work more on the game (and also do some of that crucial “spending time not thinking about the game”). 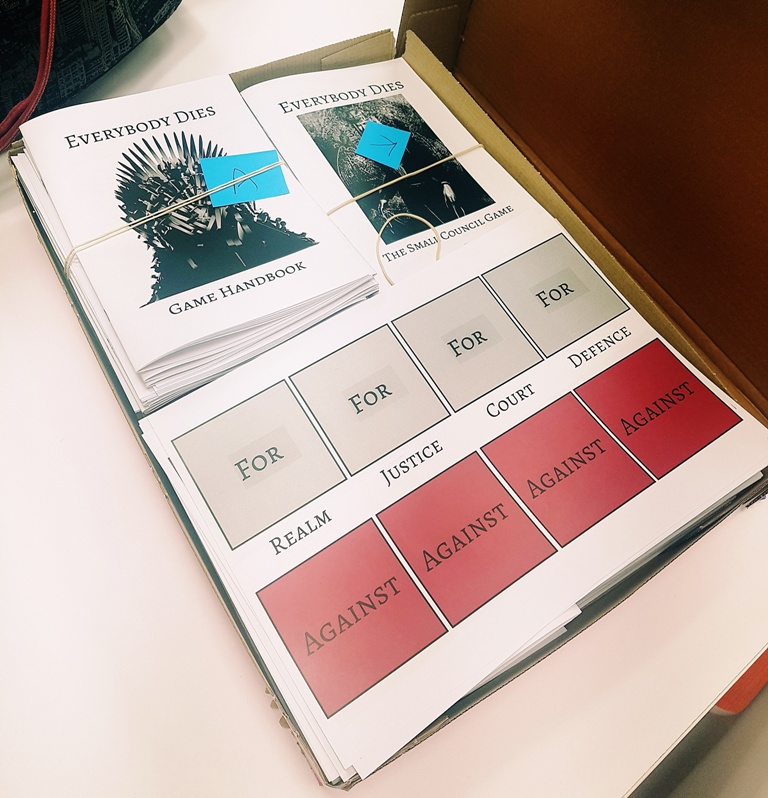 And if you only have a laser printer, ABSOLUTELY get it printed professionally.

I can recommend Flippinimage (they did my map, cards and counters). I used the Leeds Uni Print Shop for my handbooks and other paper printing, and university print shops are probably generally a good call.

5. Do mindless stuff while watching TV

Stick on a rerun of your favourite series (not something new you’ll get too upset about missing lines of) and use that as background entertainment while you sort counters and put badges in badge holders.

Bonus points if the TV show is related to your game in some way.

Okay, I cheat because I have a live-in megagaming boyfriend. 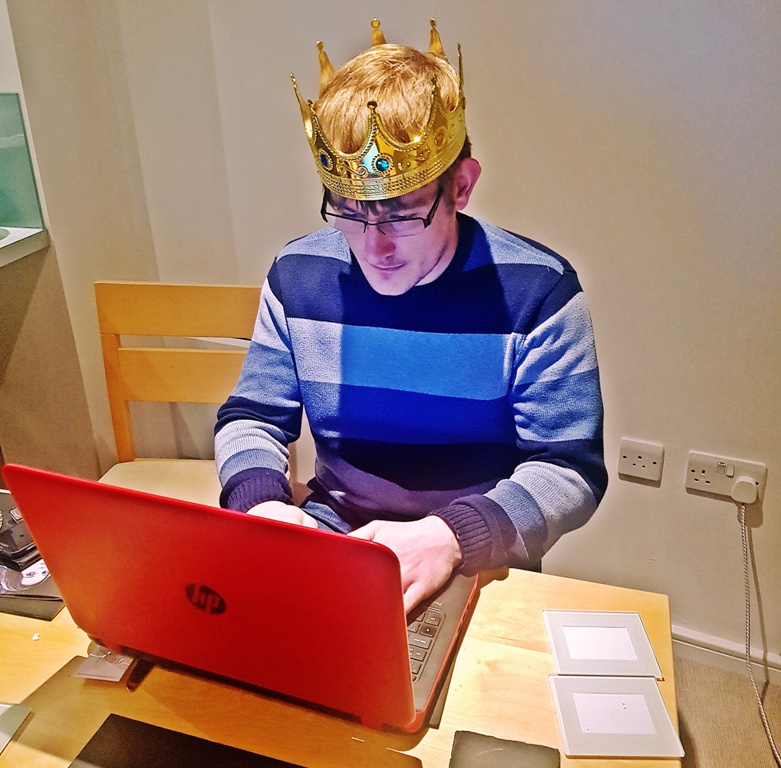 But it’s super useful to have a second person to run through lists to make sure you haven’t forgotten anything. Even if they’re not a megagamer (although it would help of course), just talk the plan over with someone to see if there’s anything obvious you’ve forgotten.

A huge part of the megagaming community is the post-game pubbage, where we find out what actually happened during the game.

Find a large pub close to the venue. Call up and reserve a space. It’s generally fine to be approximate with numbers.

8. Stay in communication with your players and control team

Email them a few times in the final week. Make sure they’ve received their briefings okay, that they know what time to arrive, what time is far too late to arrive, how to get to the venue, whether or not to bring lunch…

Also upload pics of cool game materials to Facebook. There’s nothing like a few pics to get people hyped. 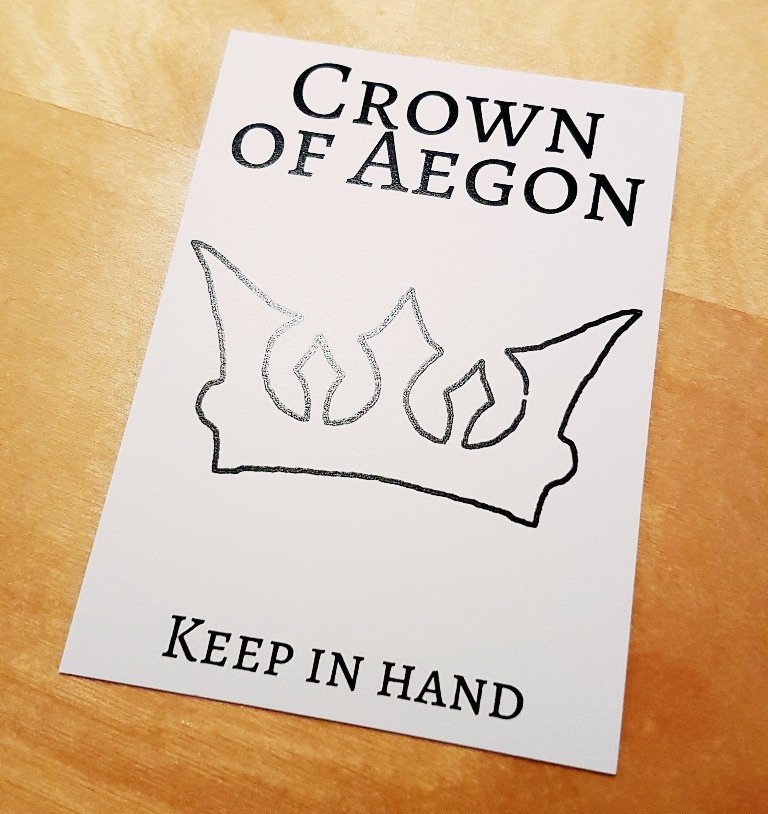 Don’t expect to get your casting spot on. Someone will end up in a role they hate, one team lead will suck at managing their other players, and two people will drop out on the day. It’s fine, it’s expected.

Also when casting your game, don’t rely on vague memories of who someone’s name might mean they are. Use a casting questionnaire (no more than 5 questions) and also use that to get proper contact details for everyone.

Plan ahead (again). Try not to leave too many tasks for the night before your megagame. On the must-do list: make sure everything’s packed, sort out what you’re wearing the next day, and sort out your lunch.

Then, stop. Have dinner (order takeout). Watch a movie that has nothing to do with your game. Go to bed early (though it won’t help, you’ll be awake for hours).

The next day, get up in plenty of time (you will not enjoy running late). Plan your transport ahead of time. Know exactly when you’ll get access to the venue. Triple check and get a phone number for who to call if you can’t access the venue (oh, how I wish I’d had that advice the first time).

BONUS 11. The nightmares will come.

They start a week or two before your game (or any time you’ve been putting in a lot of work on it).

Mine tend to be in the format of “this is how your game would look if it ran right now”. Which is much better if you stick to your deadlines, so players are just confused about turn order because your presentation isn’t finished, rather than not having a map.

So, if you follow all of these tips, you won’t panic?

YOU WILL TOTALLY STILL PANIC.

But seriously. Megagames are crazy stressful to plan and execute, but it’s all made up for when you’re standing on stage at the end and everyone’s had an amazing day.

At least that’s what I’ll be telling myself in the 48 hour countdown until Everybody Dies Harder starts. Wish me luck!

So it's about 7 weeks until Everybody Dies Harder, the second run of my Game of Thrones themed Megagame. In...