Why, you may be wondering, when the most recent outing was probably the most successful. When I’ve just put in so much work writing a whole new set of 100+ character briefings (including the spares). When we’ve finally come up with some good fixes and new mechanics and we’re finally including dragons!

What Happened on the Day

Firstly, rather than giving a recap about what happened in the game, I’d like to point you to some fantastic After-Action Reports by various players/Control:

Lyman Beesbury, Bannerman in the Reach

Maester Jorah of the Riverlands

Theomore Harlaw and Merya Merlyn, Bannermen in the Iron Islands

Larys Strong, Bannerman in the Riverlands

You can also see tons more photos on the Pennines Facebook Group or the ED3 Facebook Event. And there’s also this nifty live video that shows that I basically never know what’s going on in any game, including my own…

Everybody Dies 3: Playing With Fire

Next I want to take a look at the most recent run and share some of my thoughts on the design:

We changed the setting

Probably the biggest single change. Setting it during the Dance of the Dragons, a civil war between two Targaryen claimants, solved a lot of problems and created a lot more. Rather than the previous games, that focused on the difficulties with the Mad King Aerys, which was mostly of concern for those in King’s Landing and the nearby areas, the Dance of the Dragons impacted everyone in the room to some extent. Everyone had an opinion.

Of course, a two-sided war has other issues. If one faction is thoroughly smashed quite early on, what do you do? Balancing the game is much more important, and introducing backups to strengthen one side or the other is also essential. Due to a couple of poor strategic decisions, the Green faction lost pretty hard quite early on, and for many the war ended there. But we worked hard as a Control team to keep those players feeling engaged. We managed to end the war with the Blacks feeling like they’d decisively won, and the Greens begging for “one more turn” to get them back in the action.

The two best additions to this run (other than dragons obv) were the region map and the value stickers. The region map solved tons of the problems from previous games: where could players travel between? Was a route blockaded? Who by? And it also meant there was less clutter around the main map, renamed combat map for this game. 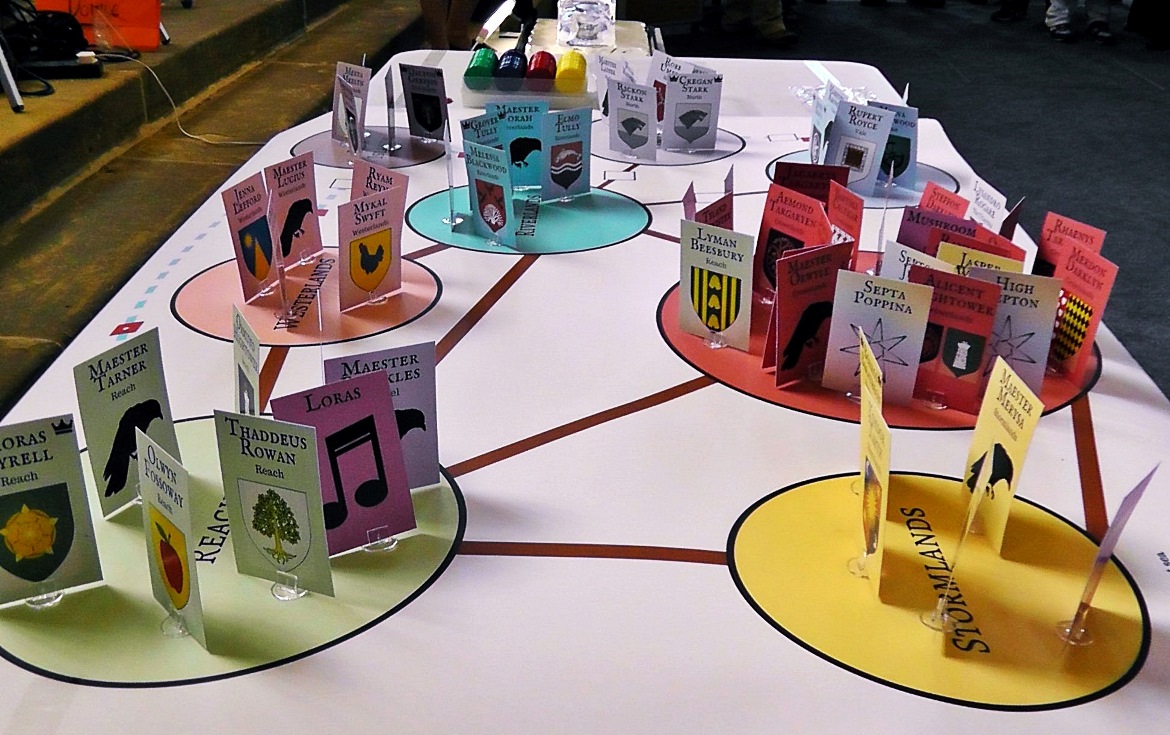 We continued to tweak the movement rules

I’m still not sure about movement rules. I like having the maesters as the only free-moving players, but since we didn’t give the Iron Islands one they were a little isolated. And the bards ended up a bit bored… perhaps I should give them an additional movement phase halfway through each action phase?

We still had bored players

The tricky thing about the game is that realistically, you need to leave a player guarding your region, because otherwise it is likely you will not know that a player is attacking your lands. The downside is that this castellan often misses out on a lot of the exciting elements of the game. I’m now looking into how we can work unplayed Castellans – perhaps a standing force that you can leave on the map. Control could warn you if they come under attack, and allow you to go back and fight that fight?

Additionally, in the more remote regions of the North and the Vale, we often end up with players who are under-utilised. It was the Vale that particularly suffered this run. Perhaps in future runs it would make sense to reduce the number of bannermen in those regions, particularly if we cut out the requirement for a castellan.

We reworked the religion game

Religious conflict really isn’t a thing in Westeros. The two examples in canon are the Faith Militant, which we included in the second run and junked for this run, and the arrival of the Red Priest/ess, which we had in the first two but really didn’t make sense for this one. There is very little antagonism between the Faith and the Old Gods, really.

In prior games, we had a septon on every team (except the North and Iron Islands) and they ended up a bit bored, even when we gave them the enviable “kill all the Targs” plot in the second run. So this game we shrunk them to a small but powerful team of three. They definitely had more impact this game, but I’m still not convinced we’ve quite got it right. And there ended up being a lot of conflict between the solo players of a differing religion in the North (Manderlys) and Riverlands (Blackwoods). It doesn’t make 100% sense in the setting, but it was something for the players to argue over, so generally I’m cool with it.

This was a cool addition, but honestly only affected a very small portion of the players.

Dragon combat was deliberately very brutal, and it was the loss of their dragons that sunk the Greens’ cause. The dragon challenging mechanic was also deliberately quite intense – as you can see, nowhere on the sheet does it actually say that you succeed in riding a dragon! The only new Dragonriders we included were those that died by other means – mostly as a way to bolster the Greens. 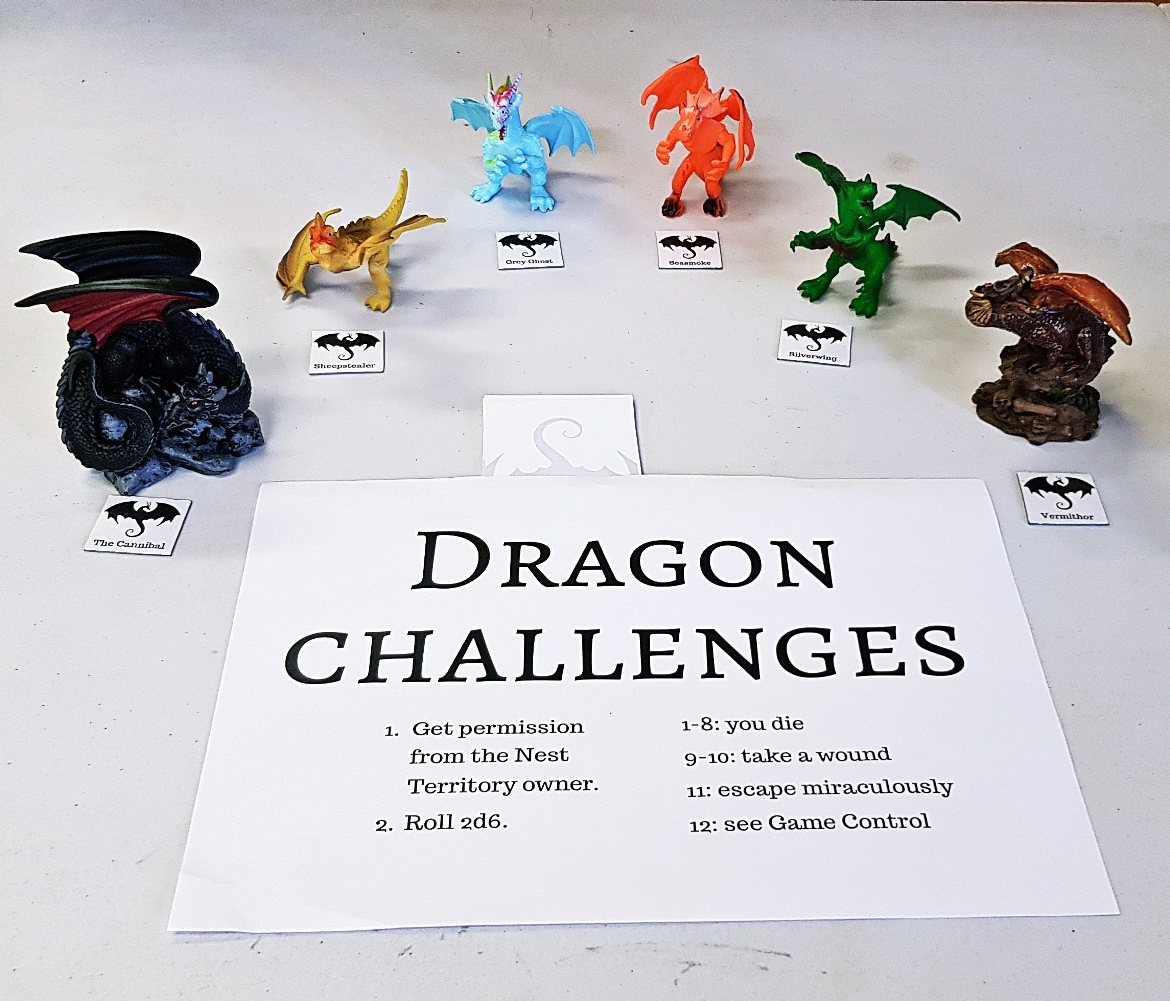 The dragons added a lot to the map view, but there was definitely confusion over which dragon was which, and players forgot to remove their counter when placing their figurine. It definitely needs work.

Unfortunately, with the change of setting, we had to get rid of my favourite part of the last two games: the Small Council game. This was the game where the councillors had to persude Aerys out of as many of his crazy schemes as possible (and usually failed).

Instead, Tim played (the incredibly short-lived) King Viserys, who died at the end of the first team time. Thereafter he managed the two competing small councils that formed.

We had an ice sculpture

The coolest (literally) part of the game, and I’m fairly sure it was a megagame first. I actually won it in a competition, but managed to even add it into the game as the mechanic – the Maesters could pretend to call meetings around it to predict whether winter was coming, and use that as an excuse to bring in their region maesters for secret conversations. 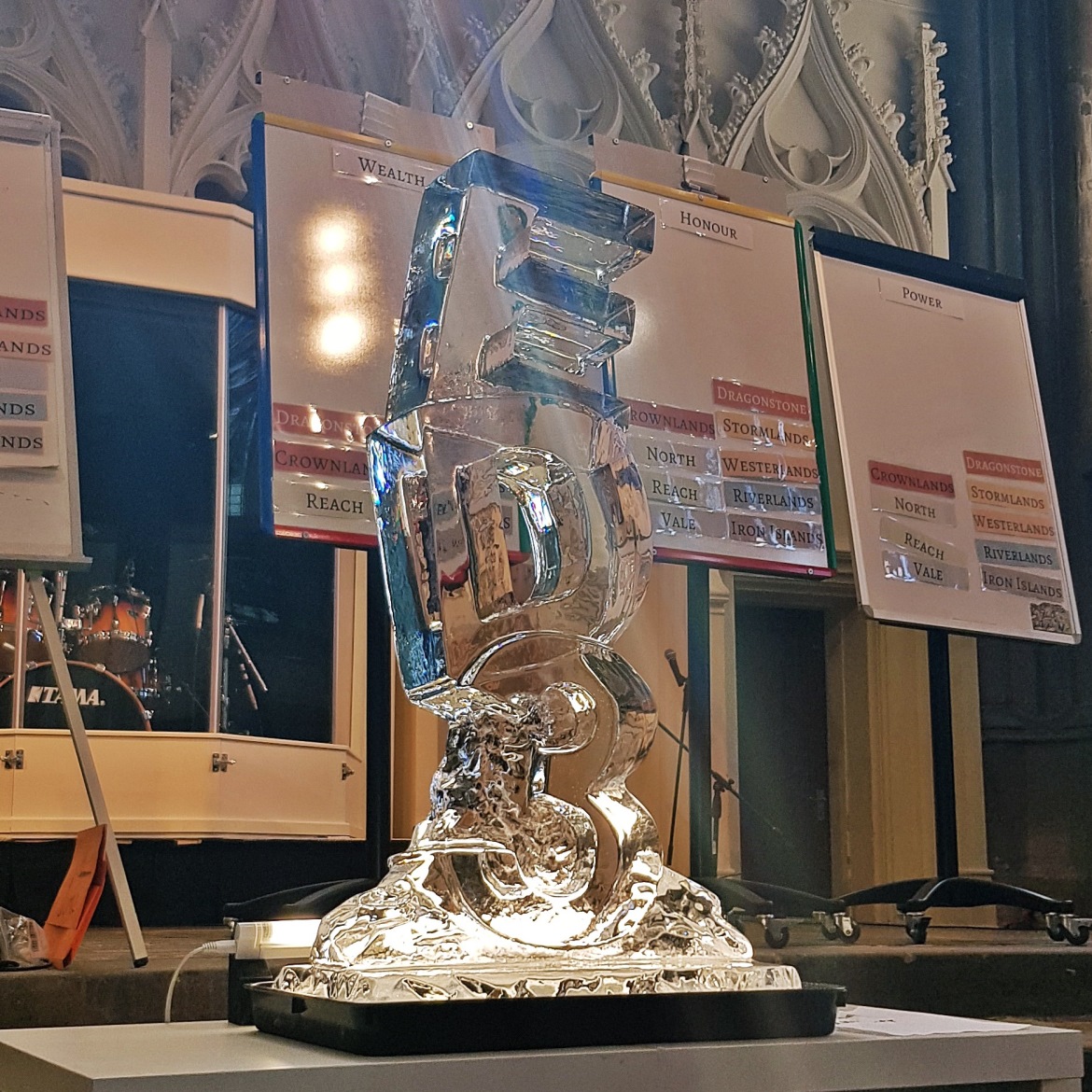 While there were a few players who didn’t have an amazing day, the feedback from the game overall has blown me away with the positivity of it. The post-game chat has been amazing, and having spoken to a lot of the new players, they pretty much all had a fantastic day and a lot will be coming back to future games.

I was very nervous prior to the game, and I’m ecstatic with how smoothly it went.

Well… there are a few reasons, to be honest.

I want to rewrite it

I first ran ED in November 2016. That means that most of the mechanics have been around for almost two years. And it shows. I’m a much better designer now than I was back then, and when I was preparing for this run, I realised how many changes I wanted to make. I didn’t have time to rework the combat system or significantly reduce the size of the handbooks. But I wanted to, and to be honest I hated sending out game materials I wasn’t happy with.

To run Everybody Dies again, I would want to rework it from the ground up. Throw out the handbook and make a brand new one. Throw out the combat mechanics… and maybe even the iconic map. And…

I want to work on other things

I have about five new megagame ideas. You can see most of them here. I’ve already announced that I’m working on Trope High for running next year, but I also want to finish off Appeal to Popularity and get thinking seriously about either Lorem Ipsum or Thorns and Roses (which will probably be a joint game between me and Tim). There is so much scope out there, and I really want to try something new.

I want something original

Obviously GRRM created the World of Ice and Fire, and it has been amazing to explore the intricate and detailed setting he has invented. But I want the freedom to create something else. I want to know the setting better than my players ever could.

I’ve developed as a designer

When I first came up with the ED concept, most of the games I’d been to were political military ones, and ED mostly follows that template. But… I don’t like combat! Combat sucks, it’s boring – for me at least. You can probably tell, seeing as all the games I’ve suggested since are low or no combat.

I think that a lot of the ED design is pretty solid, but it’s not as creative as I want it to be. I love games with jenga towers and puzzles and crazy stuff. I want more room to play.

I don’t want to be typecast

I feel like people see me as the ED designer… which is a great accolade, I’m not going to lie. The pleasure I’ve got from seeing people playing my game and enjoying it… well, there’s nothing else like it. But I want to see people enjoying other things I’ve created. I want to be known for being a great all-round designer, not designing one good game.

I can’t top an ice sculpture

What am I supposed to bring to the next one? A working volcano?

Thank you to everyone

I would like to take this opportunity to sincerely thank everyone who has been involved in the ED process. Those at Chestnut Lodge who first helped me develop the fledgling idea; my first Control team who helped fix the many many parts that broke on the first game day; Pennine Planning for helping me critique and improve; the Control on the subsequent two times who often sacrificed playing in order to help me put the game on; and of course the players who have taken some words on a page and made it into a living breathing creation that spiralled out of control and into an adventure I never expected. And natch Tim, whose contribution to the game I can’t even begin to describe. 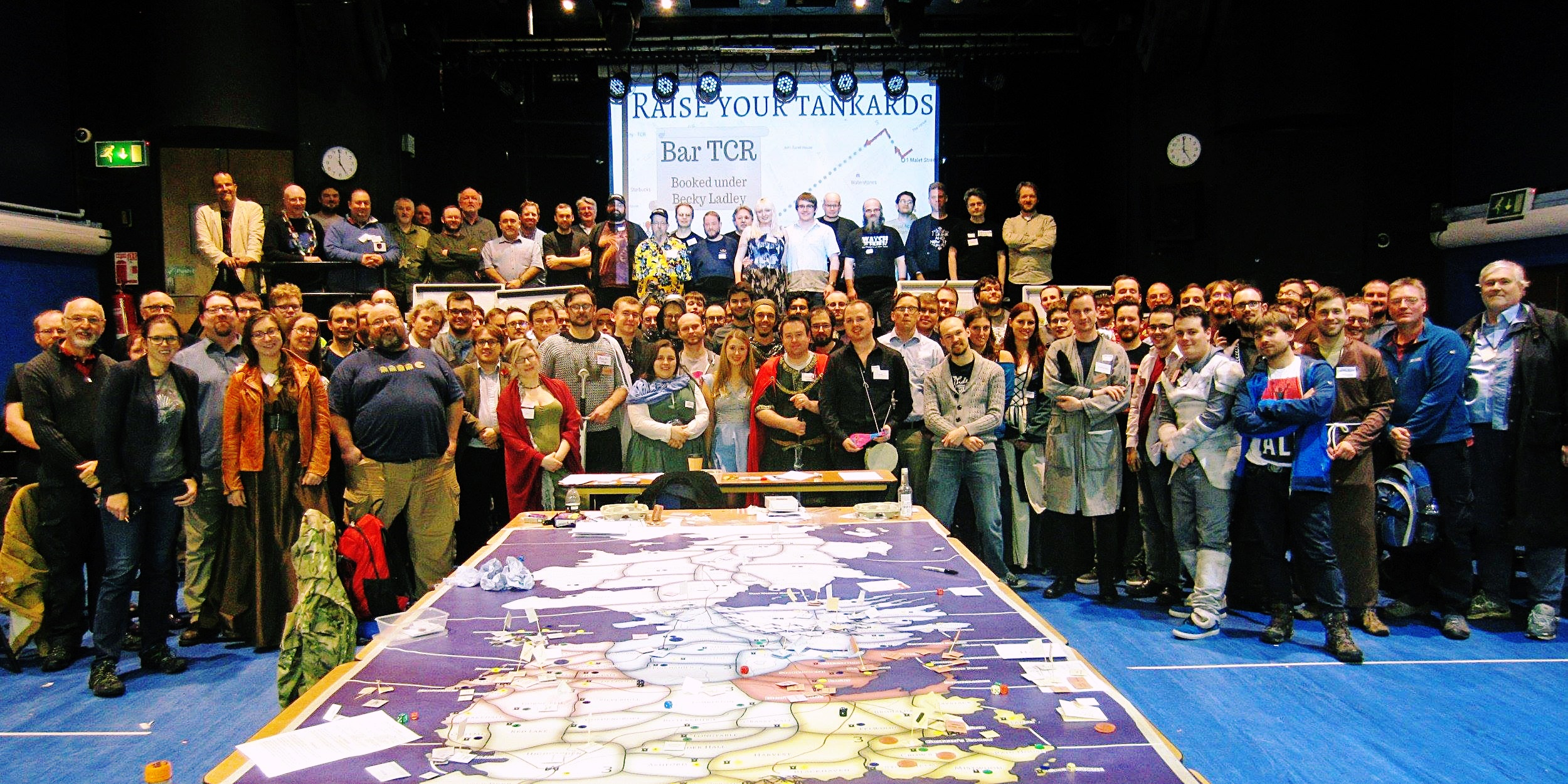 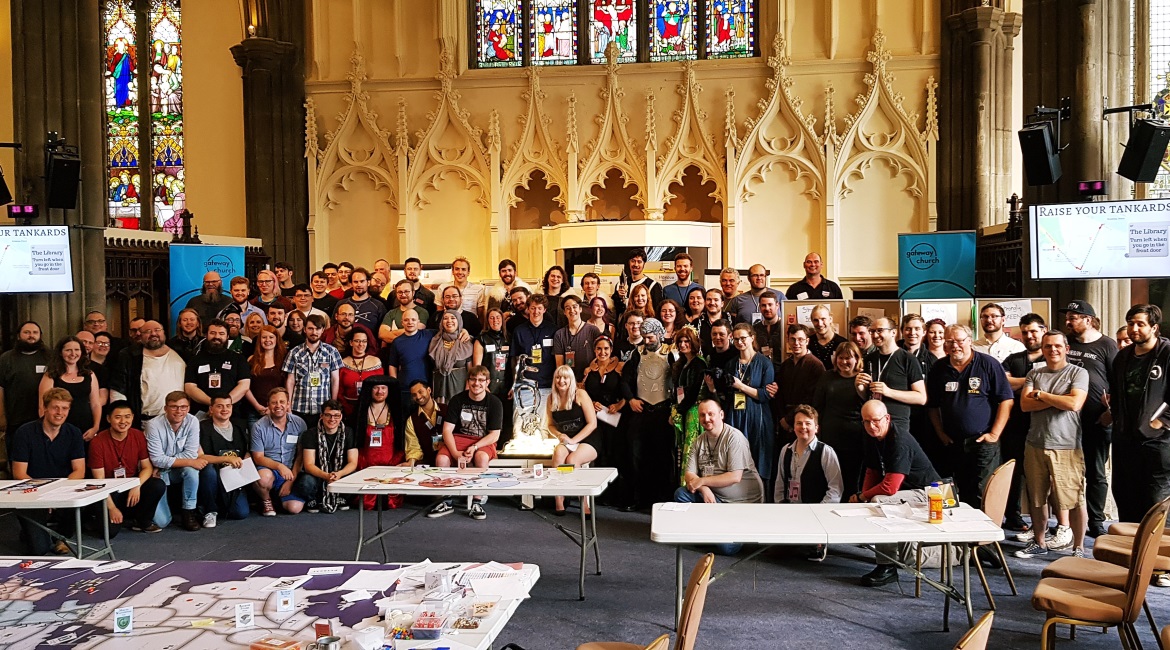 Everybody Dies has been a big part of my megagaming life. And I’ll never say never. I’ve already got the name for ED4: Once More, With Killing. But that will be far off in the future, when I’ve run some other games, played a lot more, and feel like rewriting the damn thing.

For now, Everybody Dies has died. But I’m not ruling out a red priest coming to save her.

So you've got your megagame idea down, and you've started to think about logistics? Excellent! Let's crack onto the next...