A few weeks ago I was invited to try out the brand new Leeds Cookery School. As you may know, I looooooove cooking, and consider myself pretty good at it.

But you can always learn more, right? So off I went to the course.

The Cookery School is based up at the surprisingly modern Old Fire Station in Gipton. 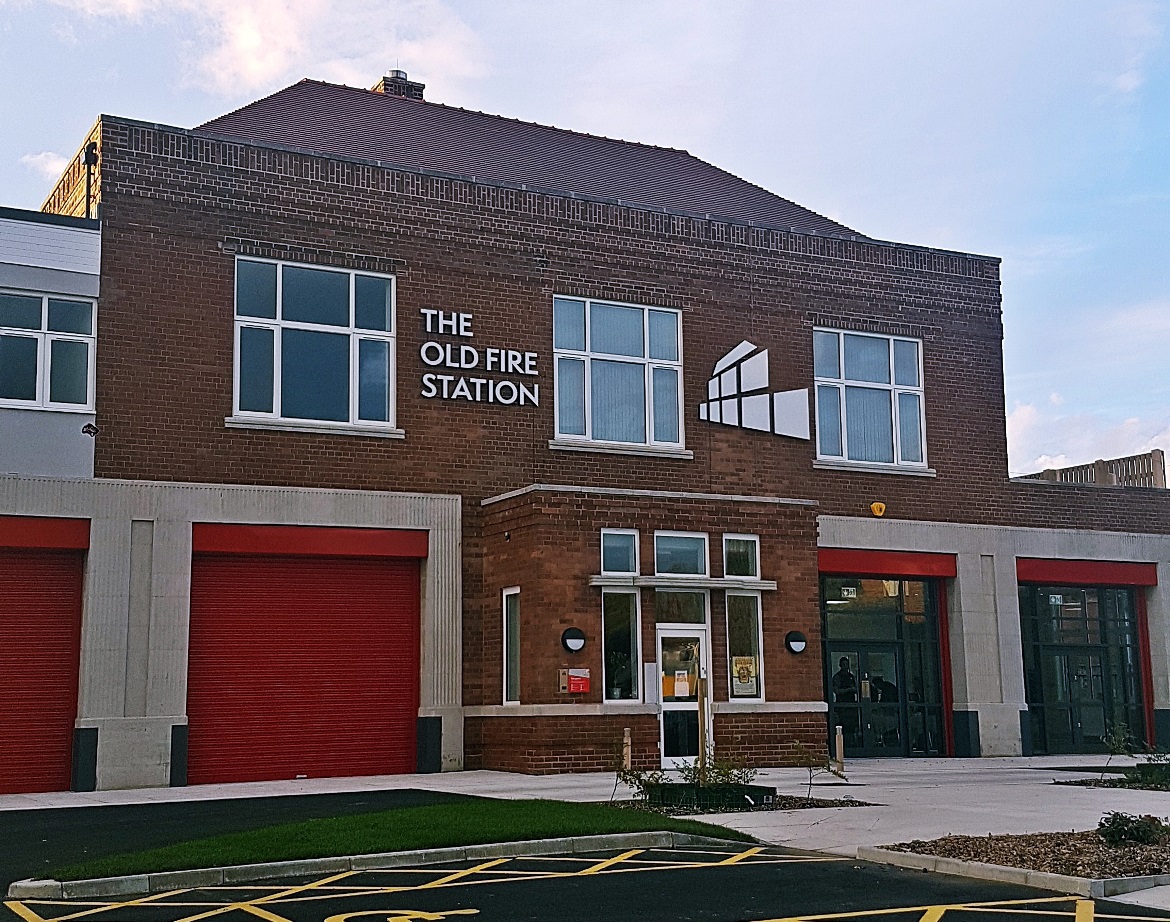 The classroom contained about five different hob stations, and there were already pasta machines set up along the work surface. The venue was even accessible for wheelchair users, as one of the stations could be lowered.

The kitchen was amazing – fresh, modern, clean, and filled with all manner of exciting implements and ingredients. 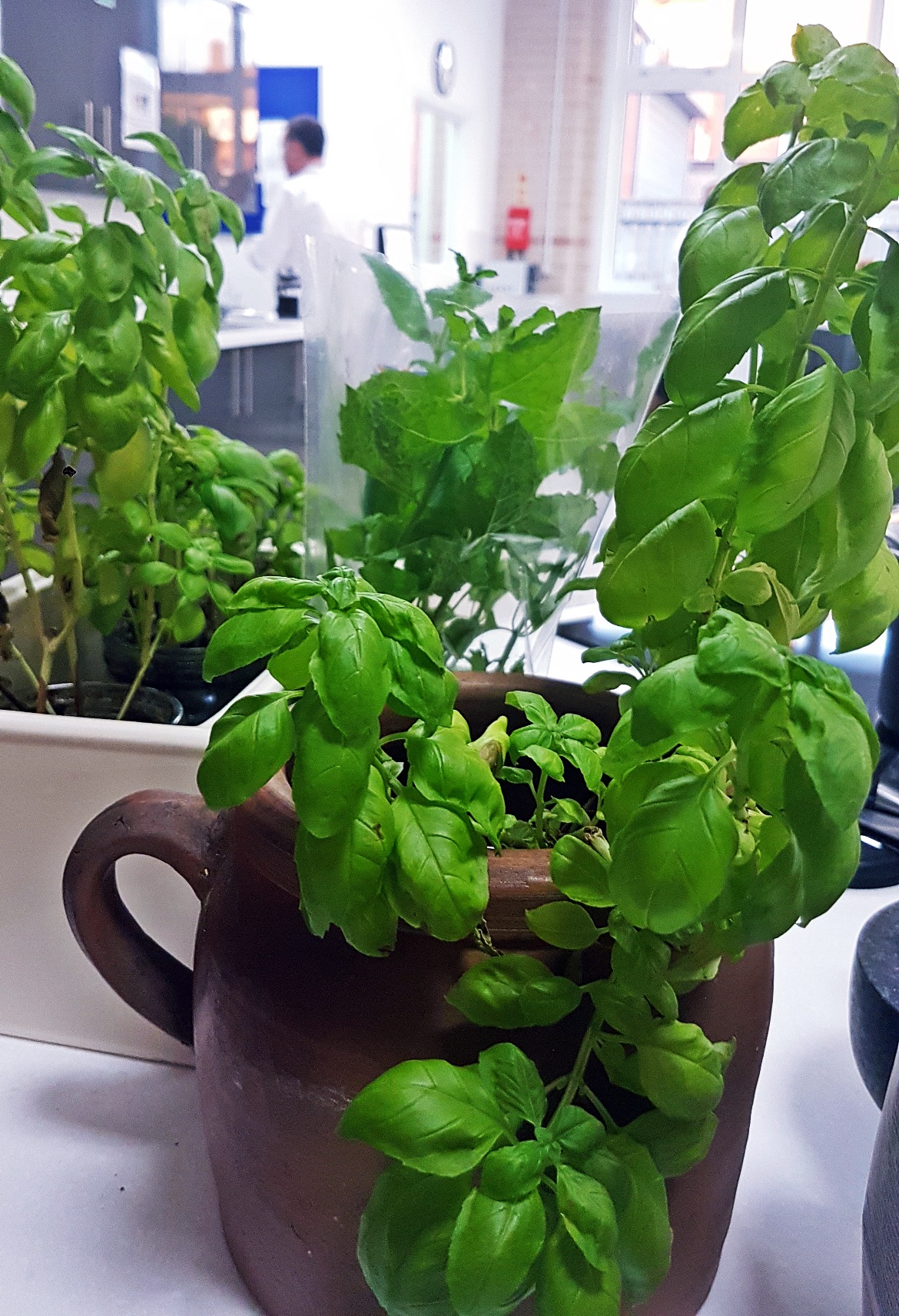 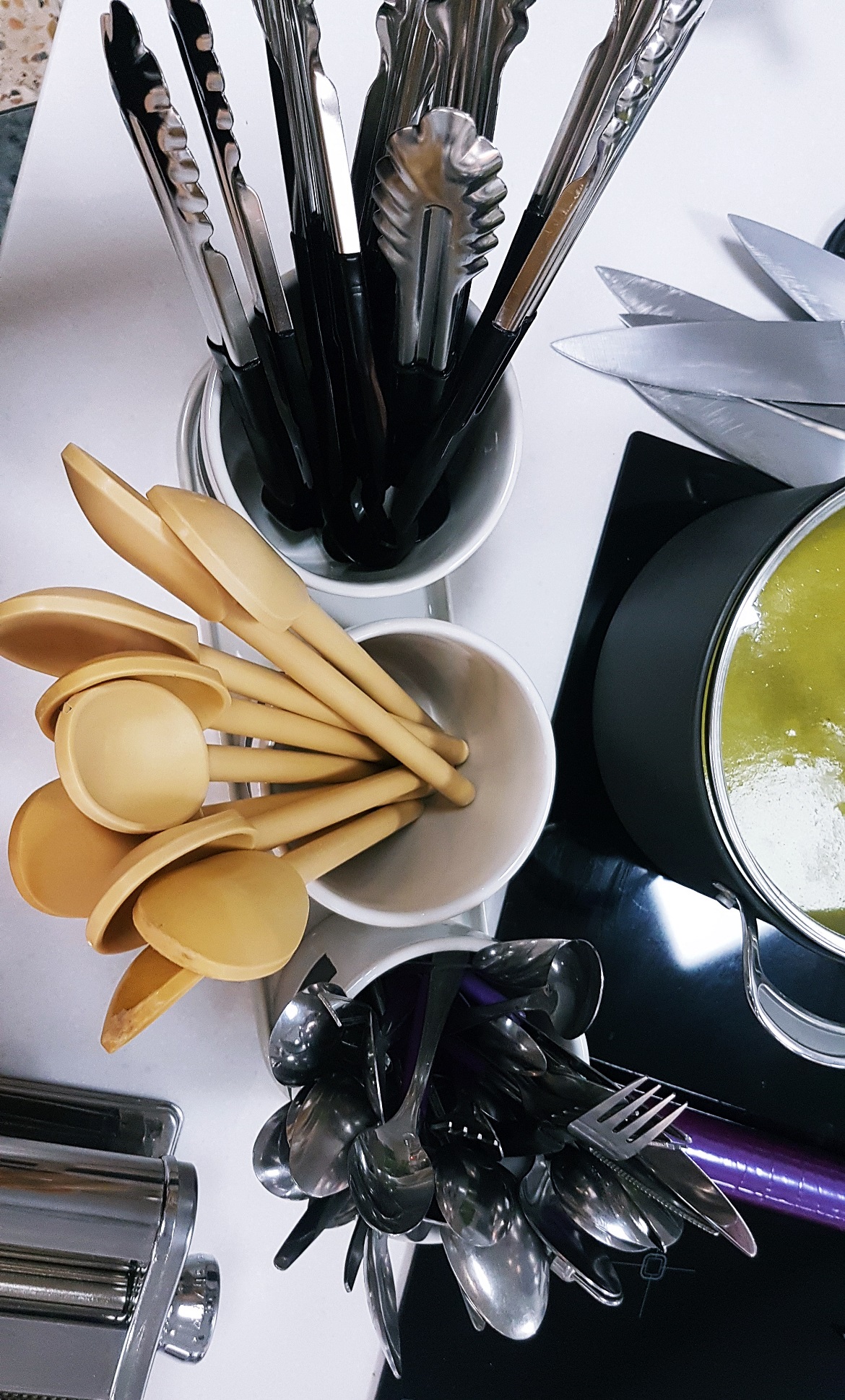 Our teachers for the day were Simon, Wayne and Dan. Head Chef Simon Chappelow took charge, telling us about the meal we’d be preparing – Fresh Egg Tagliatelle with Mushroom Cream Sauce.

Now, I’m not a fan of mushrooms. Really not a fan. But I decided to just go for it, rather than asking them for a different recipe. I’ve successfully managed to make myself like other foods in the past, and what better a time to try out mushrooms again? 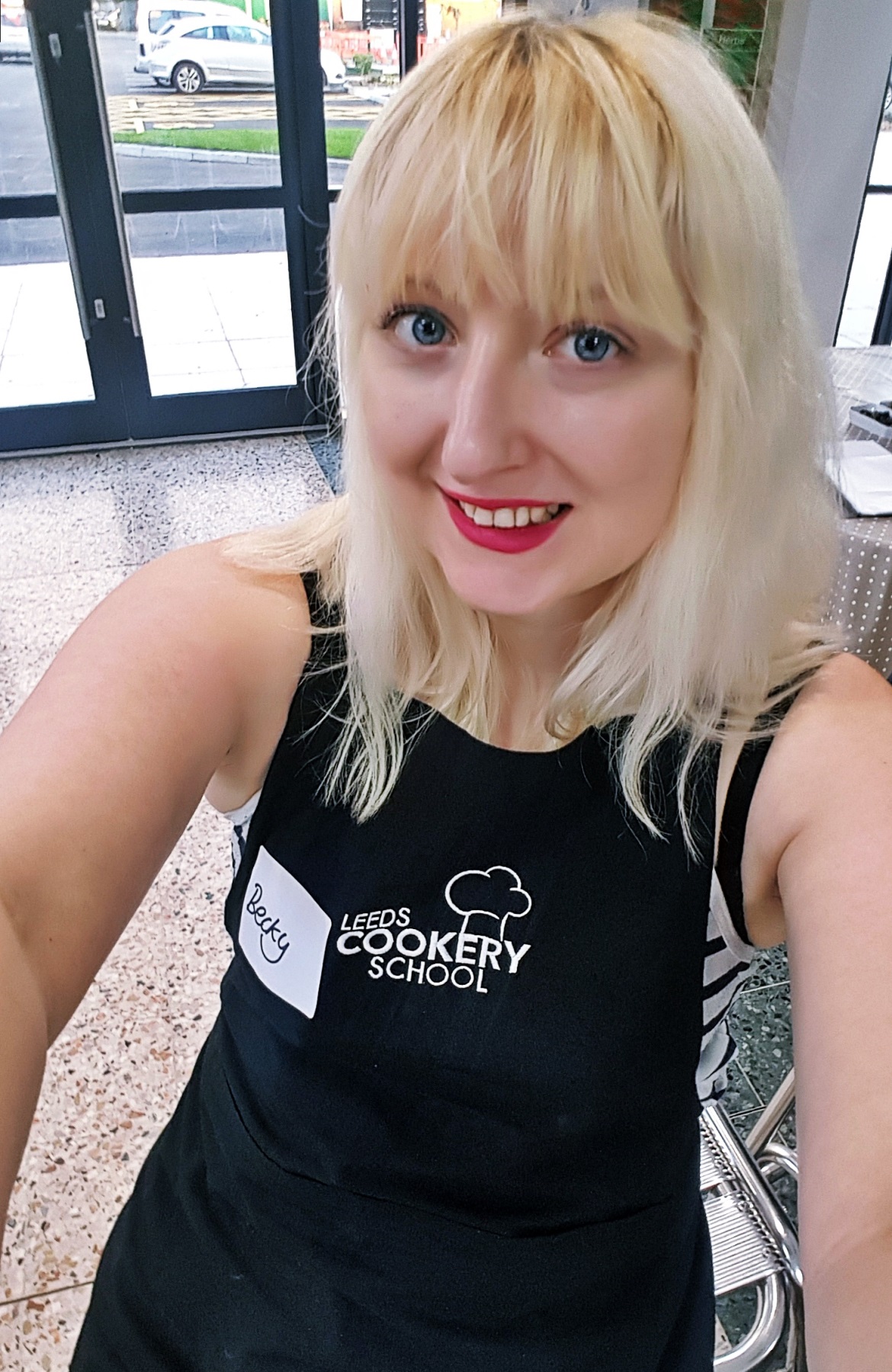 Step one was to make our pasta dough. The format of the class was watch then do, so we started off watching Simon mix up the dough. 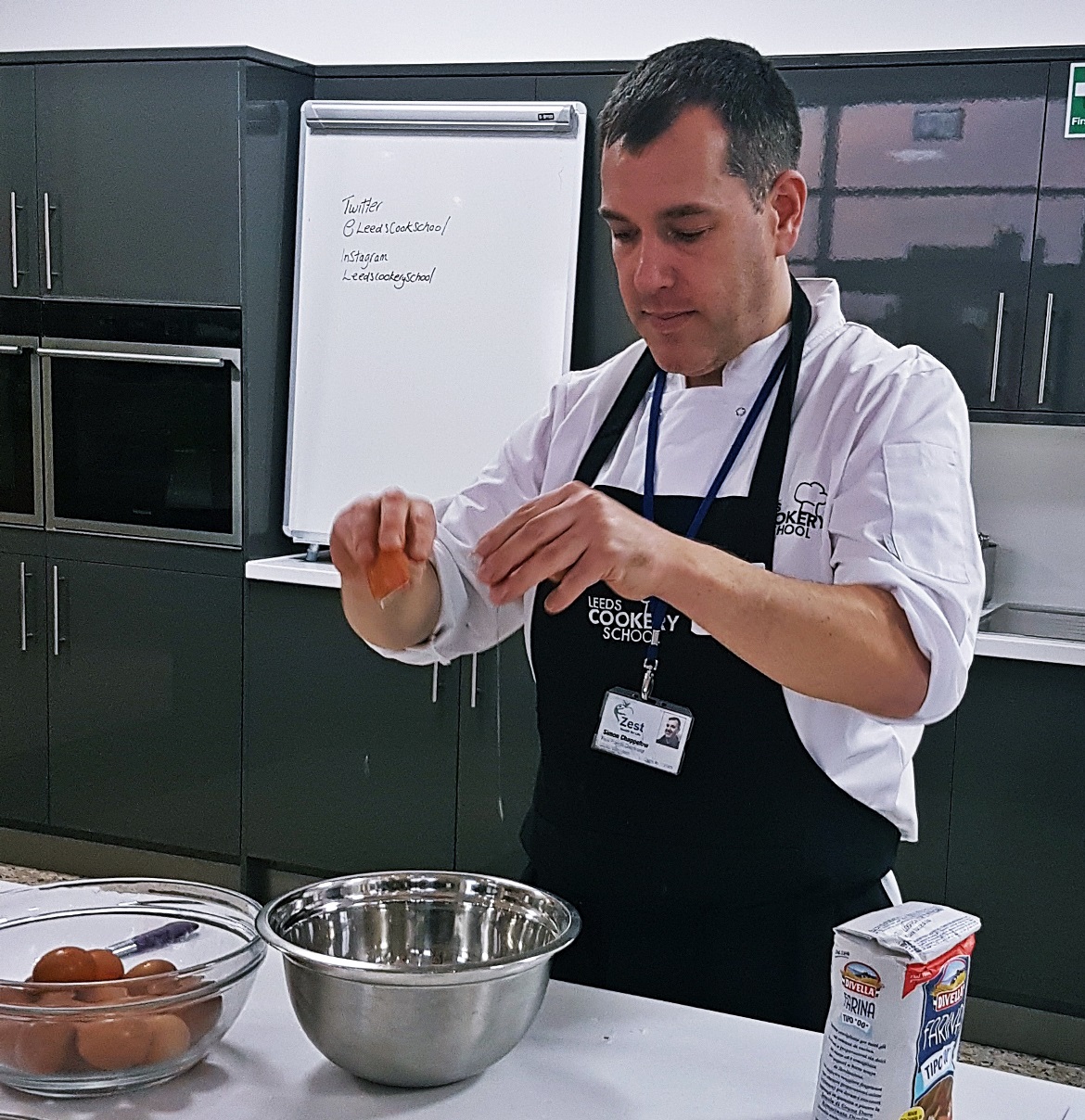 We started with some 00 flour. Feeling like the teacher’s pet, I raised my hand when Simon asked who knew what was special about it. The answer? It’s super milled super white flour that’s used in Italy to make pasta.

The flour was followed by olive oil, a sprinkle of salt and two eggs, then the real work began. 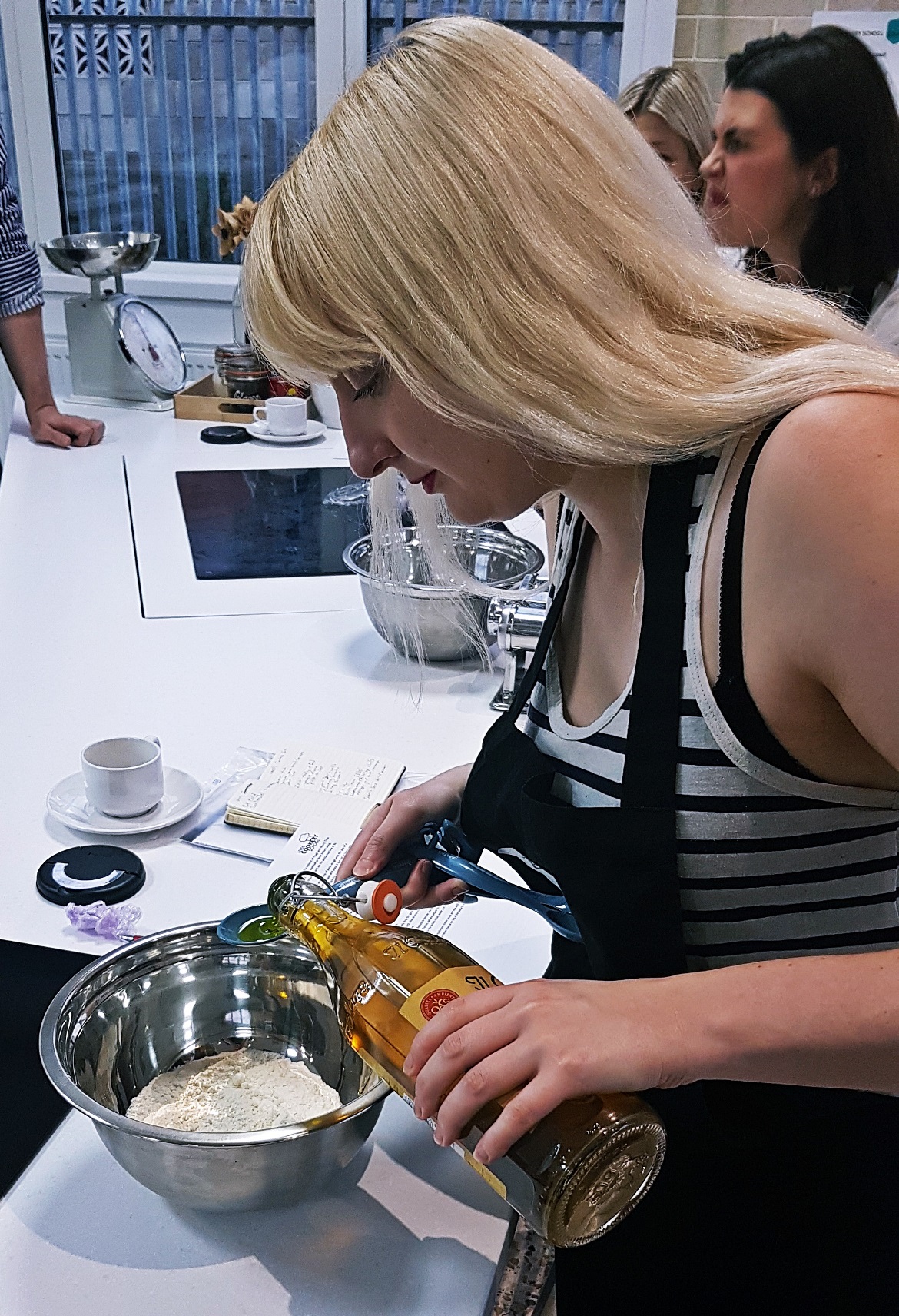 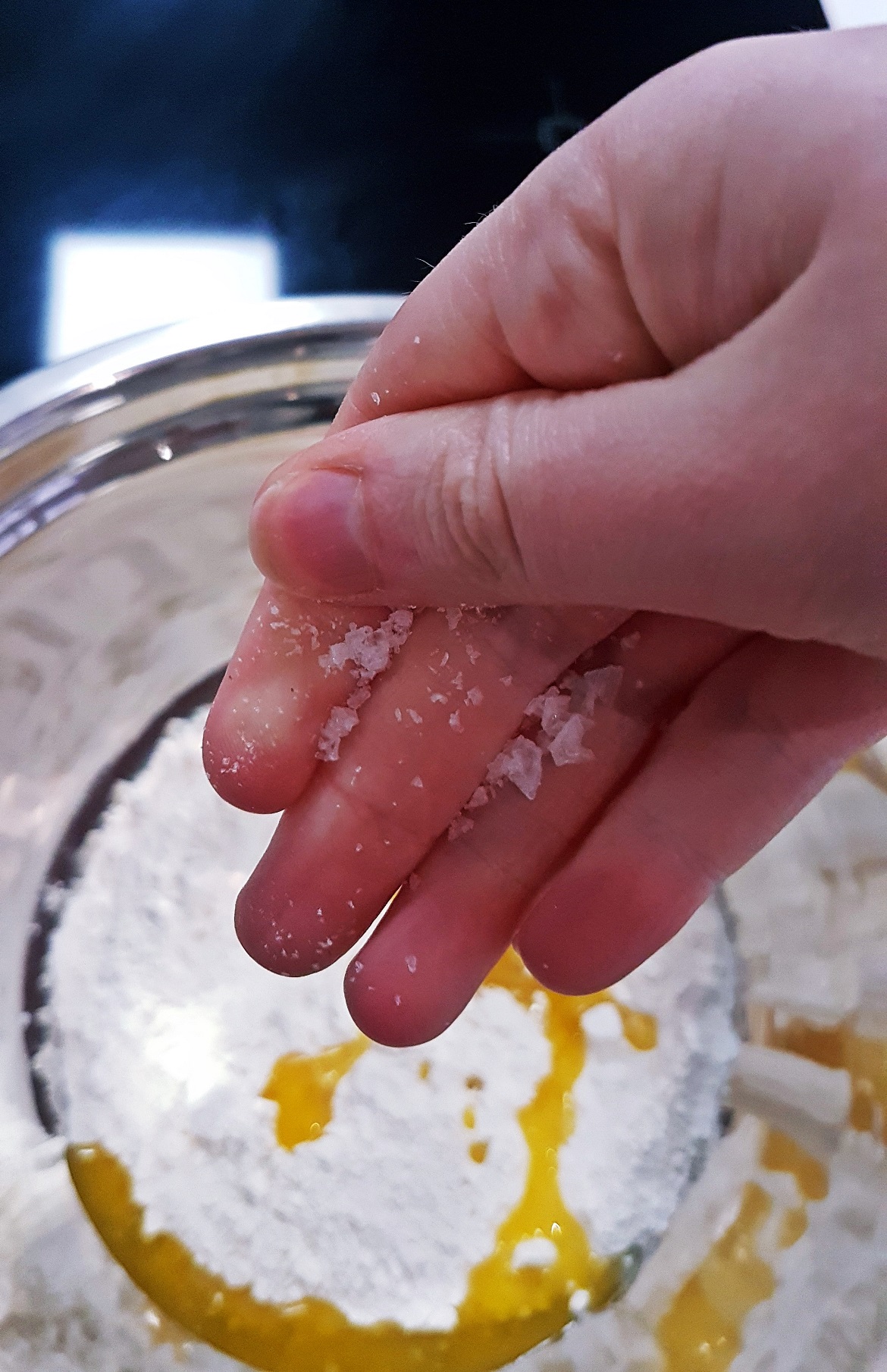 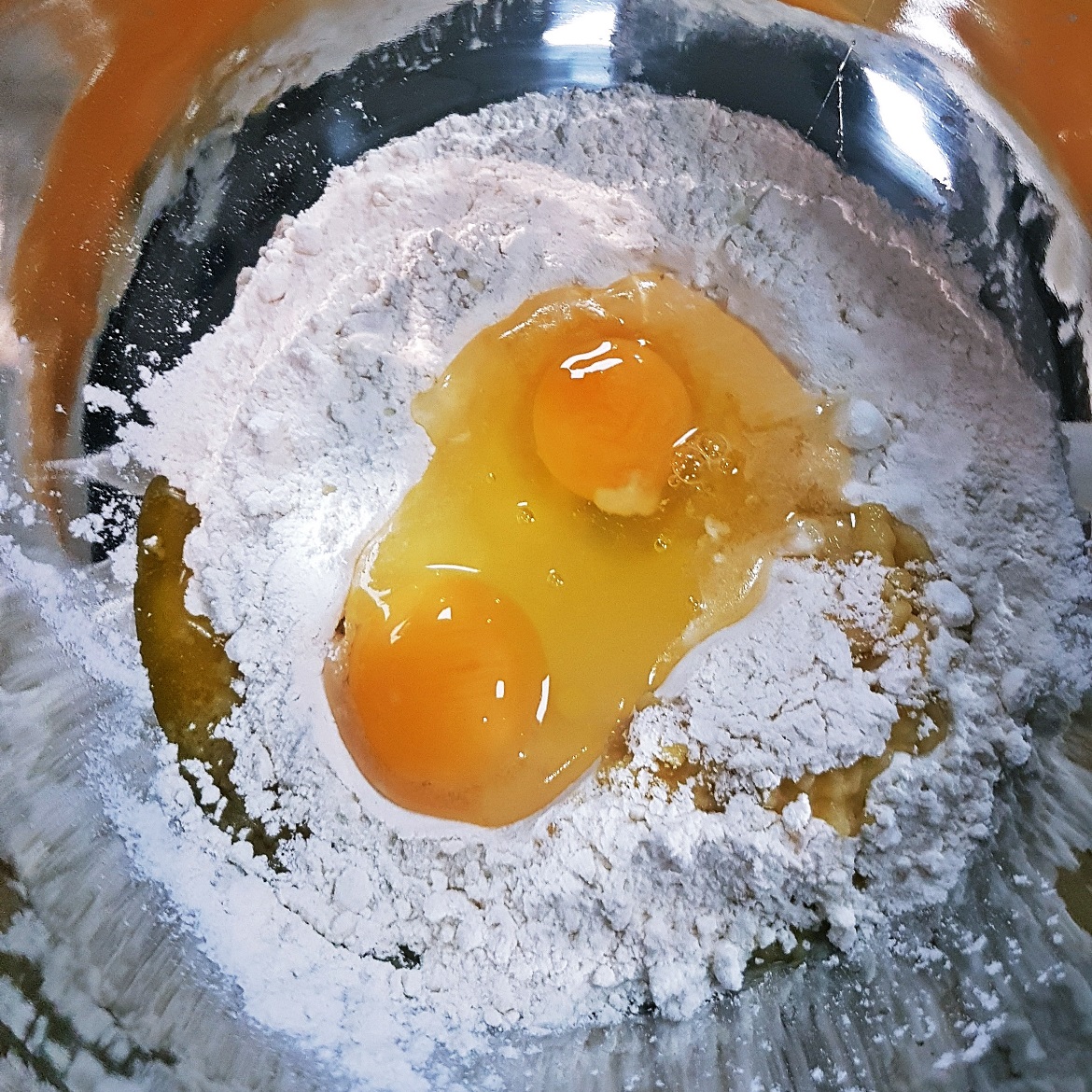 Kneading. This is why we buy dried pasta – the ingredients are cheap and simple, but the kneading really takes it out of you. Simon told us what to look for – the change in the dough, from yellow to a paler colour, from rough to smooth, as the gluten developed. 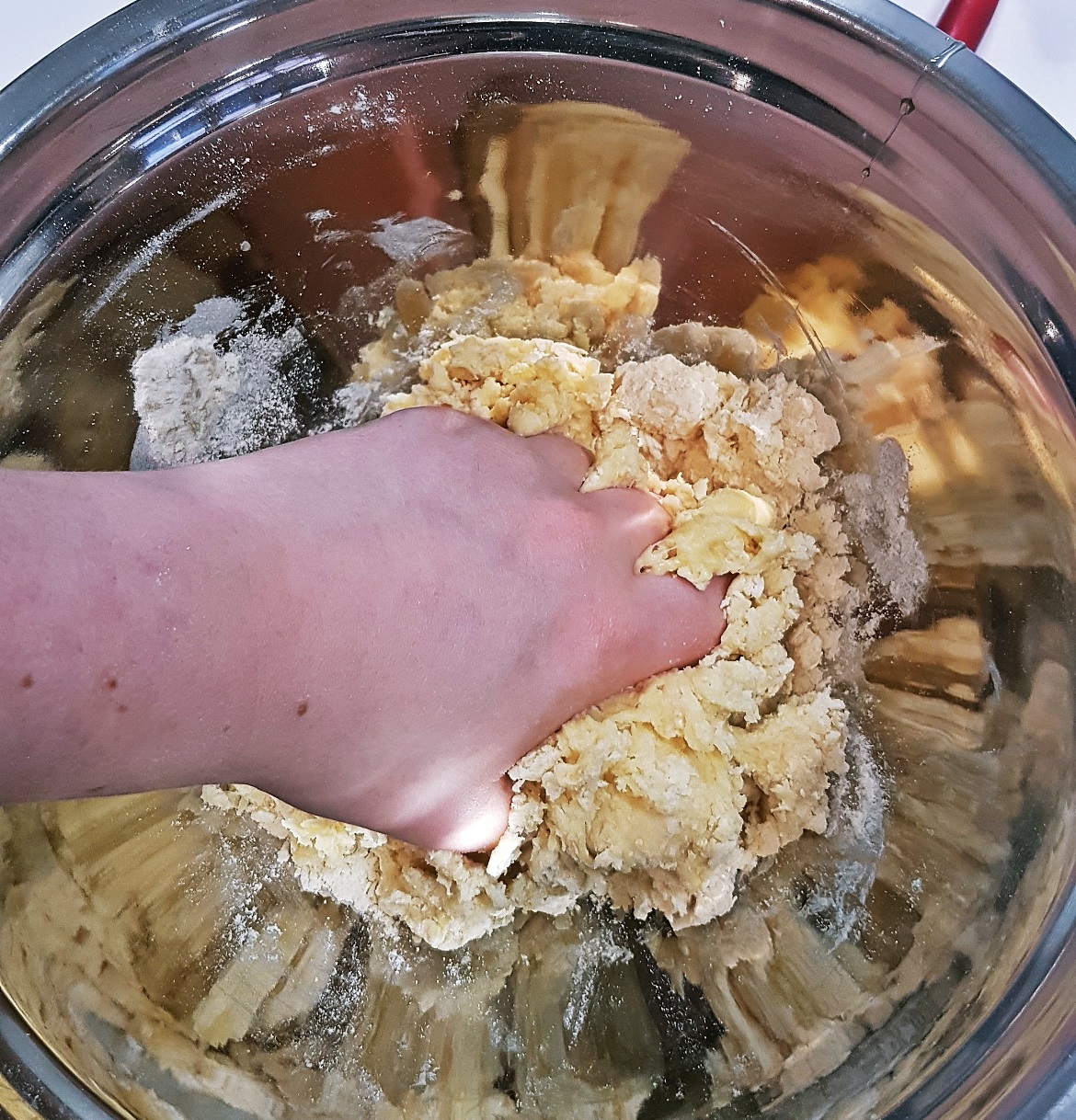 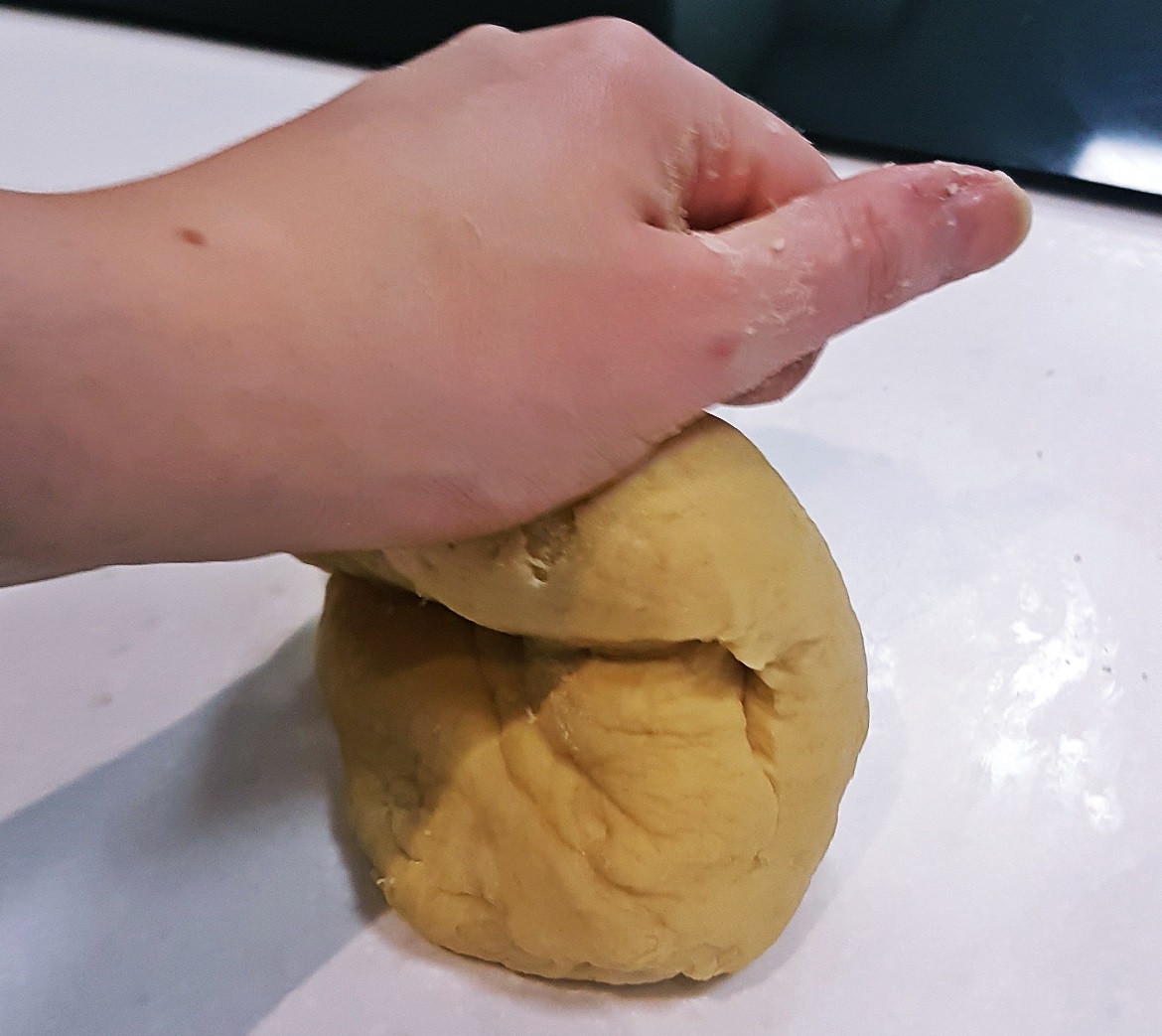 Kneading done, we chilled the dough and moved on.

Clearly the part of the class we’d been waiting for – experimenting with our pasta machines! First we watched Steve demonstrated, with the pasta dough he’d just made. He passed it through the machine a few times, folding and turning the dough to get it nice and smooth, then he began to decrease the size of the gap in the machine. The dough was rolled thinner and thinner, and we wondered a little if it was going to tear embarrassingly… but it didn’t! Steve finished off by cutting the pasta into thin strips by hand, rather than using the preset tagliatelle setting on the machine. It seemed fair – tagliatelle comes from the Italian word for cut!

Next, it was our turn… disastrously, for me. For some reason, I couldn’t get my pasta through the first few runs of the machine (before we even reduced the size of the gap) without it tearing. Luckily Steve came to the rescue and helped me get started. Eventually I had handmade strips of fresh pasta, ready for the pot! (Also, so my pride isn’t too bruised… I took home half my dough and didn’t have any trouble using my pasta machine at home!)

Wayne Clarke took over, teaching us how to make the sauce. First up was chopping the mushrooms and garlic, and while we waited for them to fry he gave us tips about how high to turn on our heat and why you should always add oil to your pan before butter (to stop it burning, fyi). 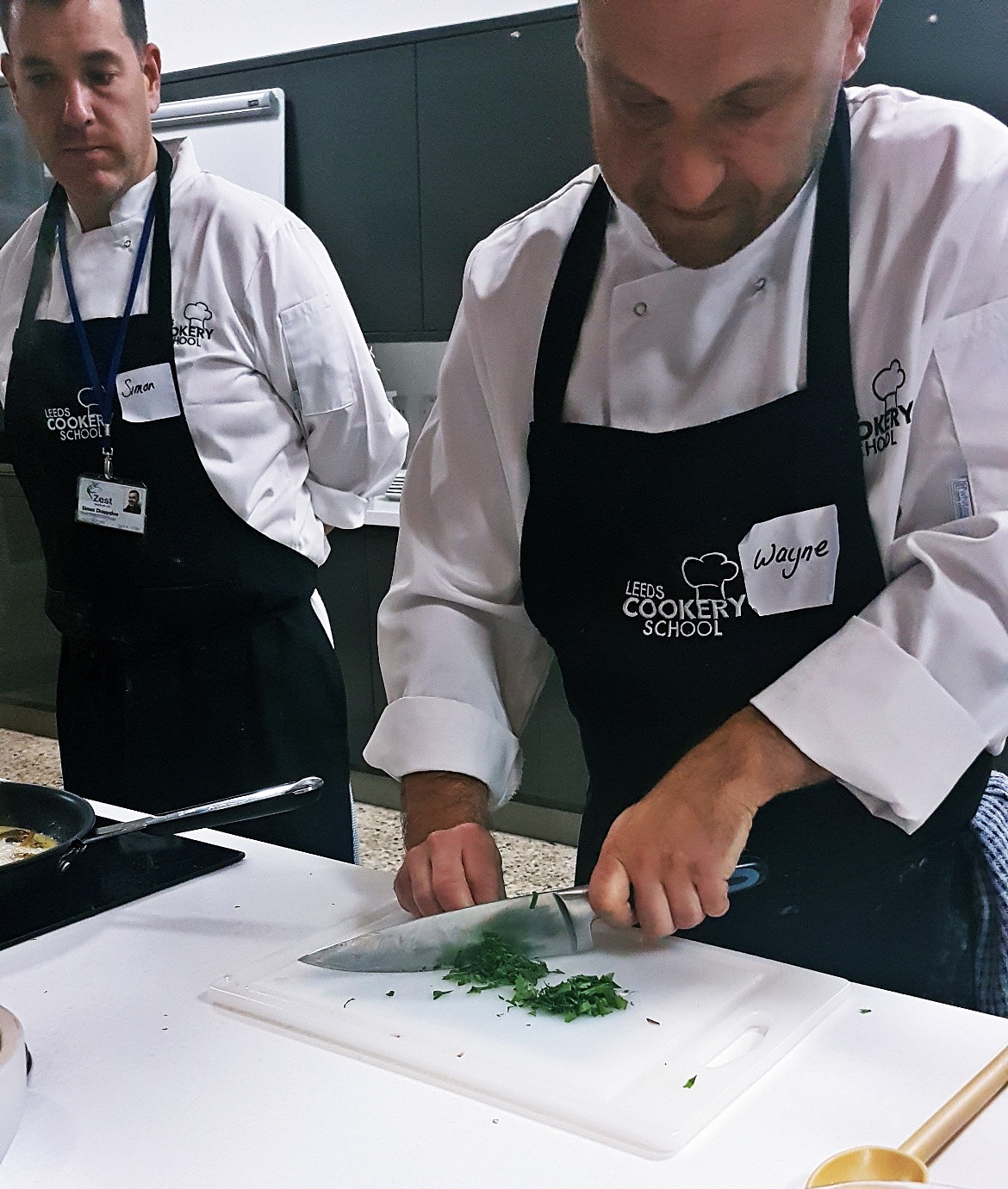 Throughout this part, we were given lots of tips about knife skills. We were shown multiple different chopping techniques, including the claw way of holding the food so that you don’t chop the ends of your fingers off. He also explained the different types of pasta, and what sauces go best with them. Since we were making a cream sauce, the long strands of tagliatelle would end up deliciously coated.

We had a large vat of stock made up, and he spooned a few ladlefuls in. He added the cream – double, and over a low heat, so it doesn’t curdle. It was seasoned, herbed and tasted to make sure it was as tasty as possible. 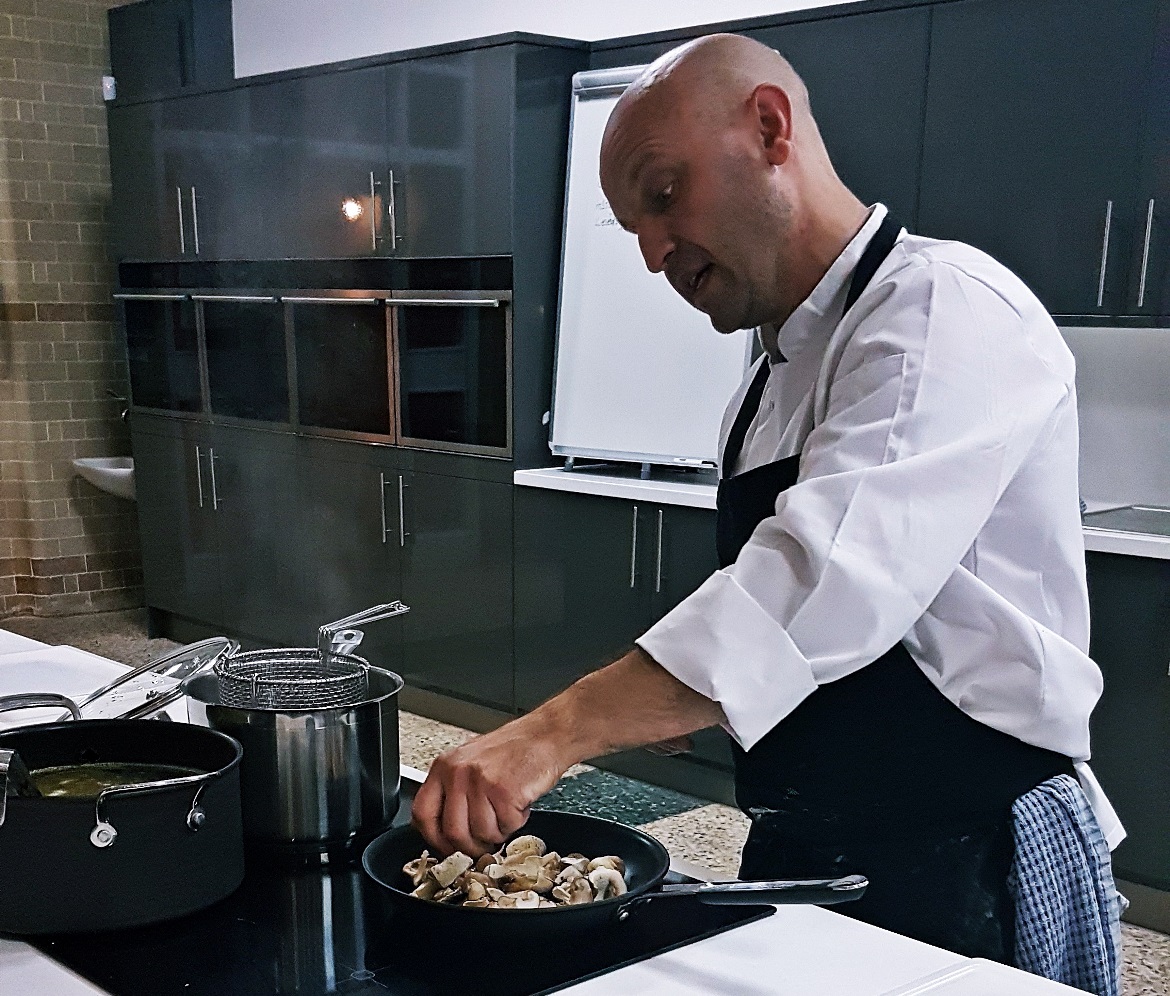 A pot of water was on the boil – as salty as the sea. Amazingly this is the way I always have my pasta water, even before this class! The tagliatelle only needed to cook for as long as it took for the water to come back to the boil. Then it was drained and added to the mushroom cream sauce in the pan, stirred round, dished into bowls, sprinked with parmesan and served with a flourish!

And now, of course, it was our turn. We followed the same steps as Wayne, though with a lot less innate skill. The demonstration part of the class had gone on longer than expected, so I used some pre-chopped mushrooms. I also chose to use three garlic cloves, rather than the one suggested. Remember, I was fully expecting not to enjoy this dish! 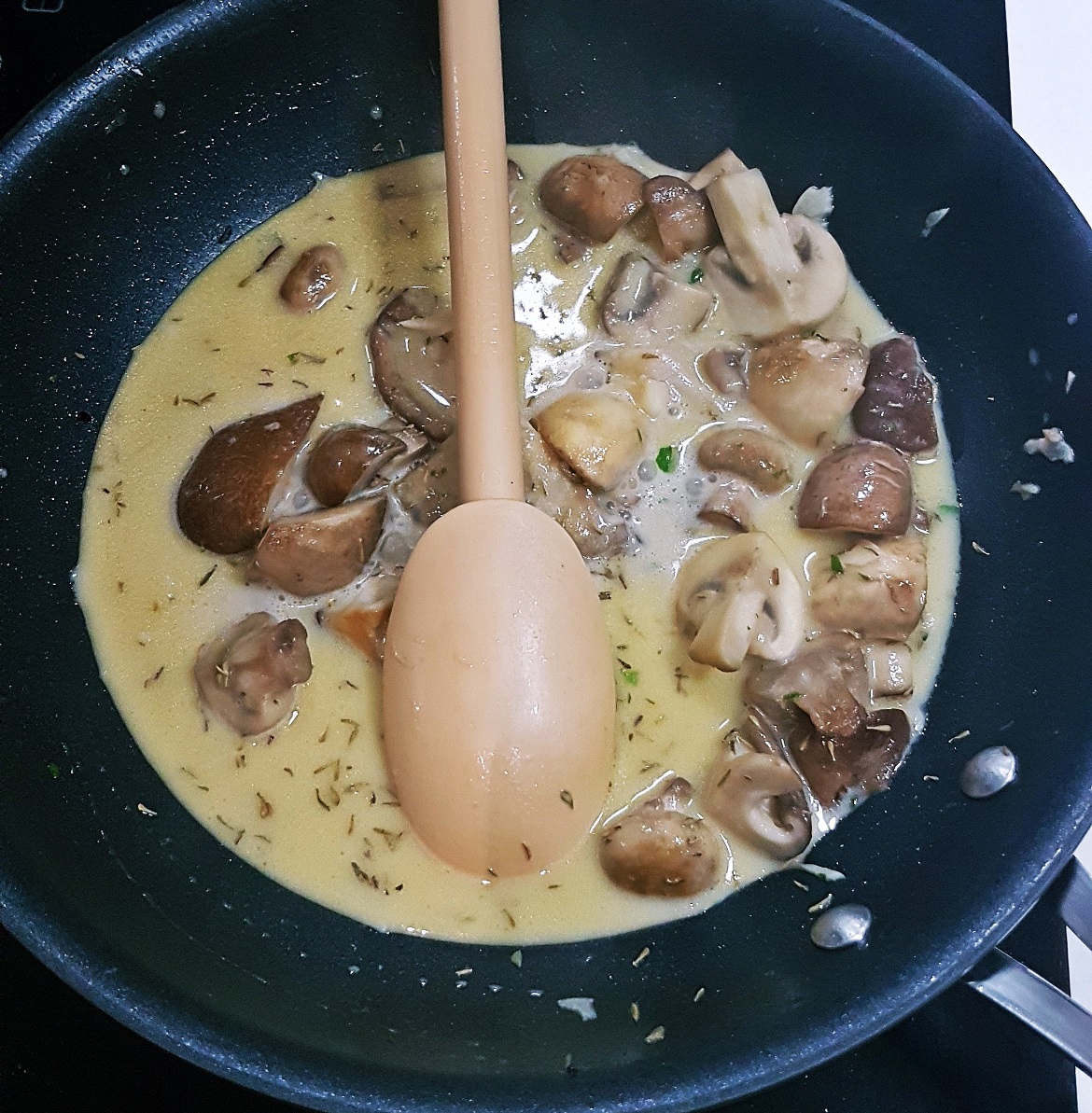 The sauce part of the recipe was simple to follow, and before long I was draping my tagliatelle into a pot, stirring it in with my sauce, and plating it up. 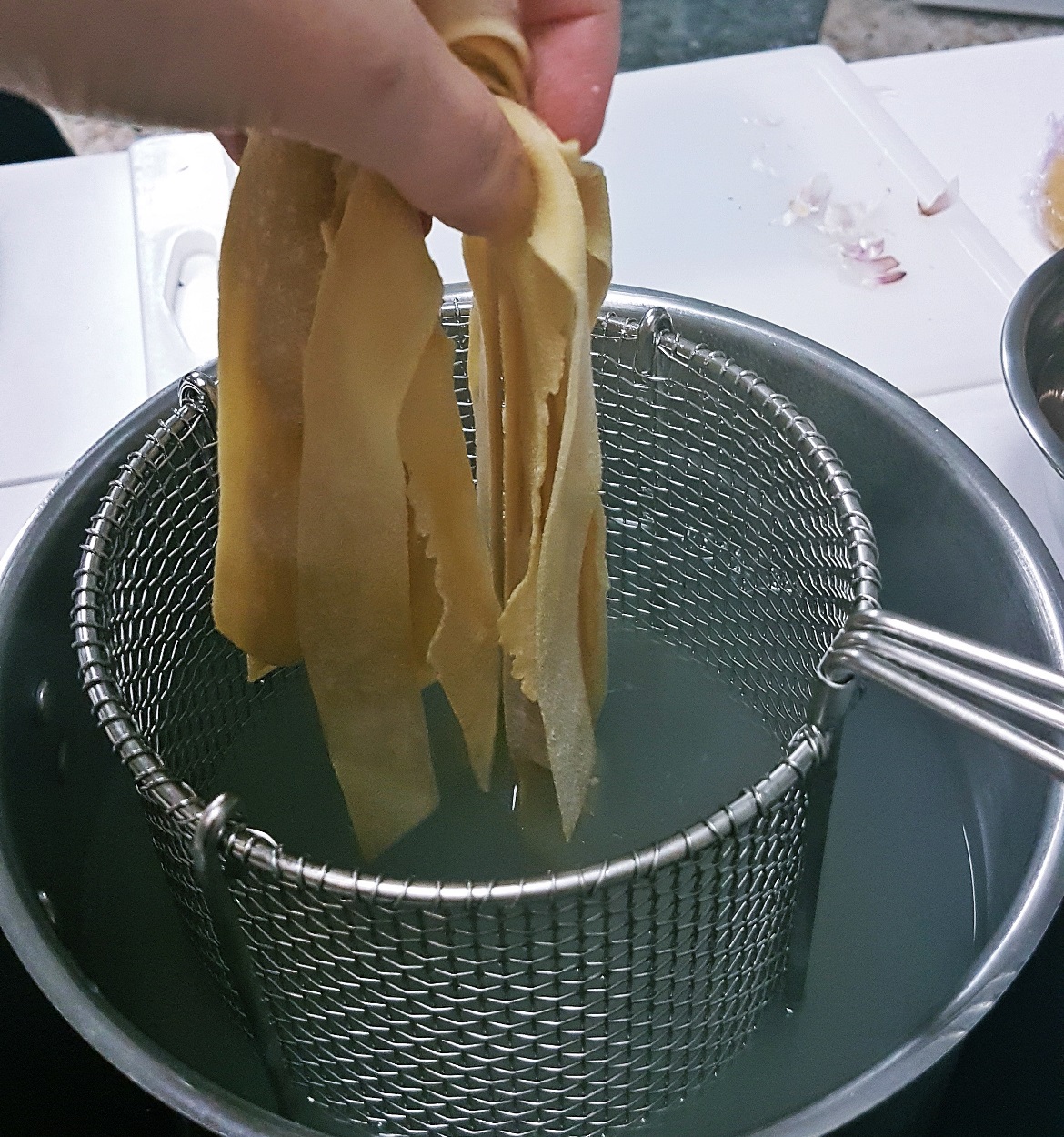 Now, the real test of the evening – the taste test! I tentatively put a forkful in my mouth… and to my surprise and delight, I actually liked it! I ate the whole damn plate, and enjoyed every mouthful. Whether it was the mushrooms used, the thrill of making it myself, or the desperation at finally being able to eat… it was delicious. Excitingly, Leeds Cookery School run tons of different cooking classes. From “How To Cook The Perfect Steak” to “The Secrets of Chocolate”, they have tons of different things on offer, and I personally can’t wait to sample a few more.

The other awesome part about this entire company is its purpose. Y’see, the school was started up as the commercial wing of Zest-Health for Life, a Leeds-based charity that addresses health inequalities and social isolation within disadvantaged groups around the city. The school is there as an alternative income stream to raise money. So you can cook and do something good at the same time.

I was invited to the Cookery School free of charge, but all opinions on this awesome cooking class are my own. Here’s my full disclaimer.

OMG YOU GUYS IT'S OCTOBER! (Fyi, October is my birthday month. Hence the excitement...) September has simply WHIZZED past, but...