Top Posts
How to Moulin Rouge, Secret Cinema Style
7 Habits of Highly Effective Megagamers
Our Finest Hour: Leeds Escape Room by Escape...
Urban Nightmare: State of Chaos – the First...
How to Write a Megagame Part 1: Choosing...
Game of Alchemy, and Megagames vs LARPs
Goodbye Everybody Dies…
How to Write a Megagame Part 3: Scoping
Undeniable Victory: Megagame Report
Ladies Who Megagame
Home Life How is it almost 2018 already?

It’s been a year of change.

I’ve been diagnosed with MS.

I’ve settled into having UC.

I’ve hit pause on Social Quirk and started working for the NHS.

But it’s also been a year of building on some of the good things I’ve got.

I feel like I’ve seen tons more of my friends and family.

I’ve enjoyed living with Tim and planning our future together.

I’ve run my second megagame and already working on my third, fourth and fifth.

I’ve become even more involved with megagames by taking a role on the Pennine Megagames Planning committee.

For three years, I’ve chosen “My Three Words”, the words I try to live by and focus on for the year ahead. You can check out last year’s here. 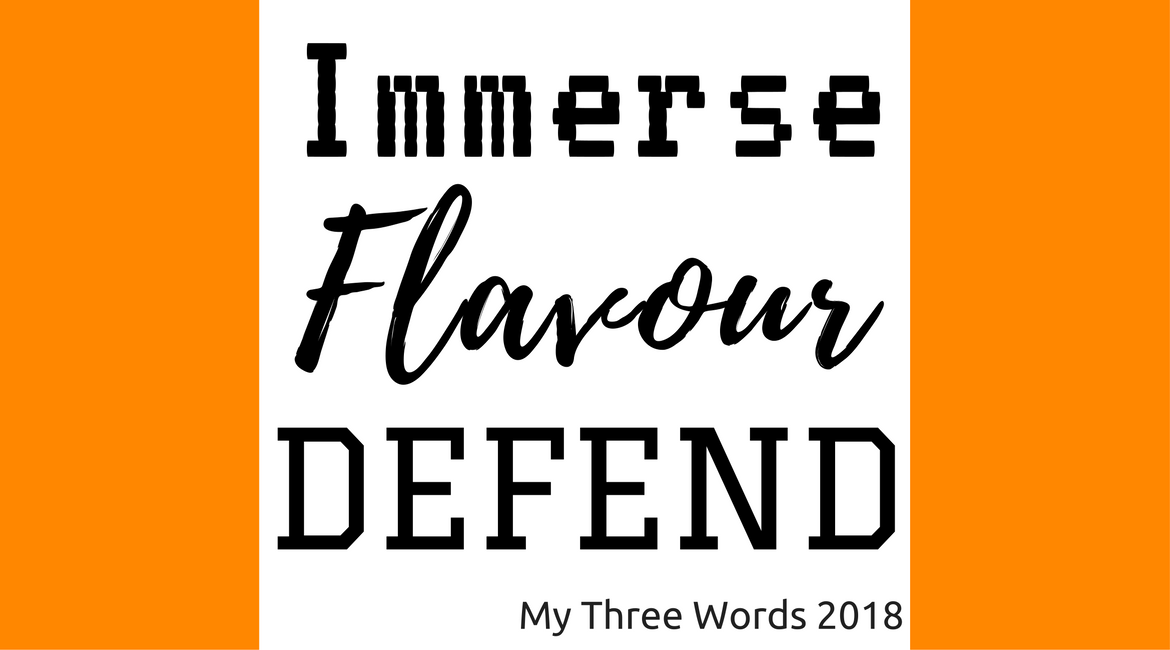 So much of life is very… surface level. You ask people how they are without really wanting to know the answer. You take part in an activity but don’t throw yourself in. You skim.

I don’t like doing anything by halves. If something’s worth doing, it’s worth throwing yourself completely into. Immersing yourself.

Also megagames are a type of immersive gameplay and I LOVE them.

No one wants tasteless food. And no one wants a tasteless life. Put flavour into your interactions with people, from your best friend, to your colleagues, to that person who holds the door for you a little too long so you have to run like a little bit of an idiot so you’re not rude.

Also a reminder to cook more, and cook things I haven’t made before. And to eat out more. Food is generally awesome.

Defend those you love. Criticise them less and let them know you love them. Defend them from their own criticisms and help them see how amazing they are.

Defend your free time. Protect the things you enjoy doing fiercely and don’t let others tell you they’re a waste of time.

Defend yourself. Don’t let yourself be brought down – by your own harsh words, or anyone else’s.

Defend your values and beliefs. You believe them for a reason.

Don’t blindly defend. But don’t stand by while the things you care about are broken.

Unlike most years, I’m not doing any official new years resolutions. They don’t work for me. Instead, I’ve got a couple of things I’d like to achieve by the end of next year (or the middle, ideally).

I’m heading out to Veeno in Wellington Square tonight, for a 50s themed evening of food, drink and fun. What are you up to? Do you have your resolutions all planned?

It's Advent Calendar Month! But before I get too carried away thinking about Christmas, let's take a look at what...