Last week, a friend invited me to come sword-fighting with her.

To be specific, it’s a form of historical European martial arts called Kunst des Fechtens (KDF), meaning the Art of Fighting. In my first class, they were covering the sword and buckler (small shield), though they also run classes on the longsword, the poleaxe, the dagger and unarmed wrestling.

It’s not like I’ve always longed to try out sword-fighting or anything, but what kind of person would I be if I’d passed up an opportunity to stab people? 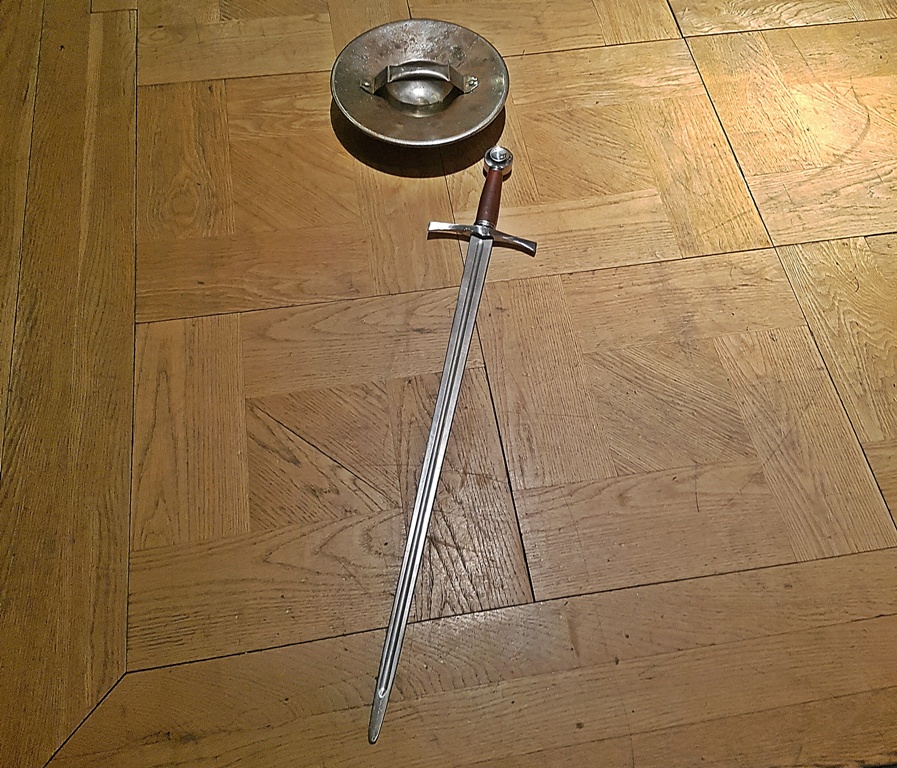 Now, I’ve never been particularly good at combat in video games (I basically button bash), I suck at playing guitar and piano, and, for a girl, multi-tasking really isn’t one of my strengths. So the fact that the sword-and-buckler is challenging because you have to do different things with both hands at once, while thinking about your posture and footwork… I wasn’t feeling particularly confident that I’d be any good, but it was sure to be a laugh, right?

The two-hour class started with thirty minutes of warm-up. This wasn’t your standard jogging on the spot, of course – we played a game of Dodge the Stick.

Doesn’t sound very intimidating? It was. 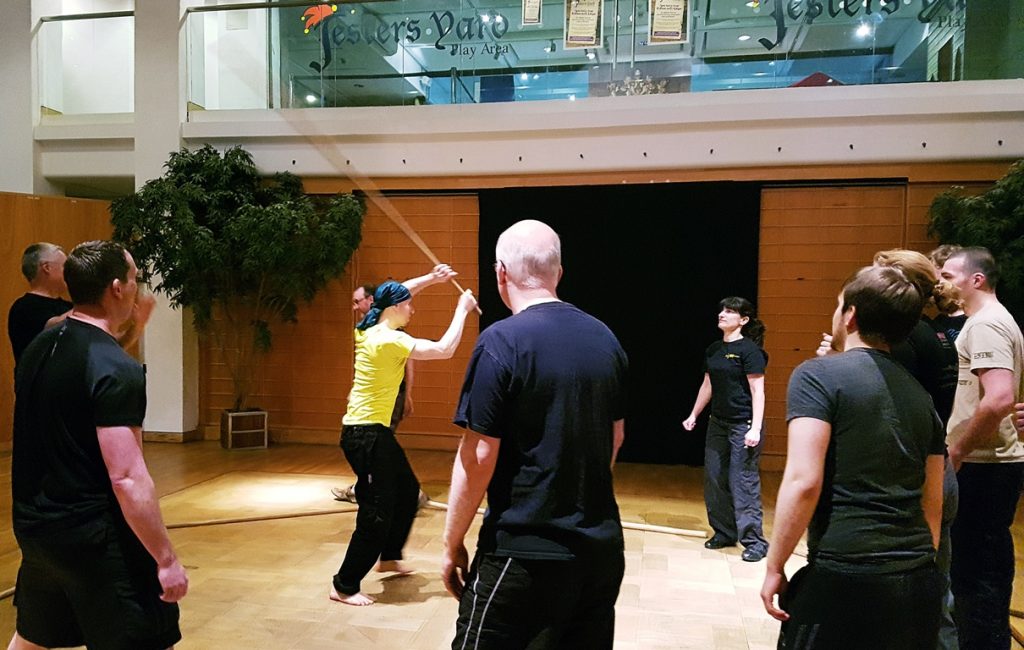 The stick in question was a thick, five foot long pole – you would NOT want to get whacked by that. We stood in a large octagon marked out by rods on the floor. In turn, each person got the opportunity to swipe at the people within the octagon, trying to hit them (gently) with the stick. If you were touched by the stick or had to leave the confines of the octagon to avoid it, you had to go do “ten sit ups, press-ups, squats or something” before returning to the game.

The game was more than just a warm-up – the idea was, if you could dodge a stick, you’d be more likely to dodge a sword too. I think people were going easy on me because it was my first time (or I was just really awesome at it). Some people were more cruel than others though, so by the time we stretched out I was a little out of breath and feeling ready to stab some people.

The first exercise was sword-less, practicing the lunge/retreat movement what would form the basis of the rest of the session. Then we were given swords!

The instructors were great – watching you for a bit, then jumping in to offer a couple of improvements to technique and posture. I used to do karate, so my main issue was my tendency to turn side on (to reduce the target size) rather than standing square on. And as soon as I got that sorted, my swing got messed up. And as soon as I sorted that… the bucklers were brought out!

The smallness of the shield means that it’s mainly used to protect our wrists and thumbs from being cut off while attacking, and so the main motion was to meet your wrists together at the end of an attack. It feels super weird when you get started, and I got the hang of it slowly – my movements weren’t exactly smooth, but I didn’t cut my elbow off or anything. 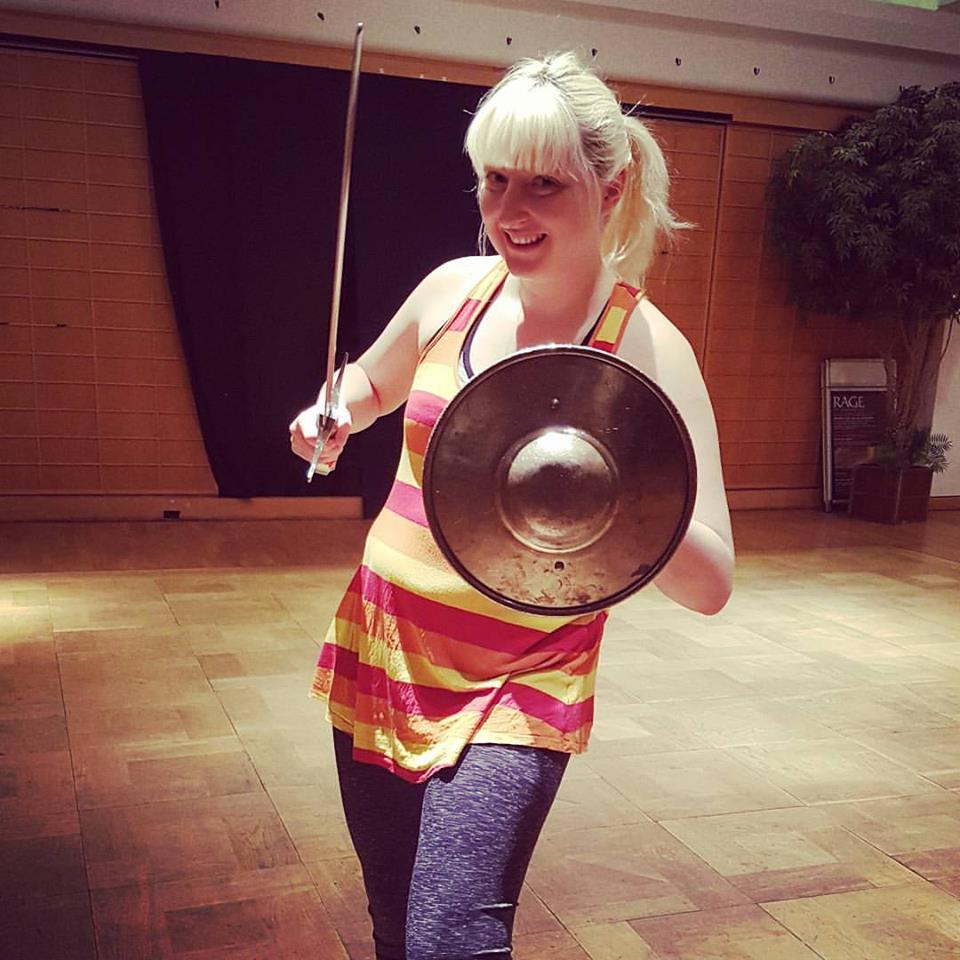 Blocking was when it got scary. I’d been targeting my attacks at my partner’s sword, but one of the instructors reminded me “remember where you’re aiming for”. Yep, the aim was to attack with intent to slice your opponent from shoulder to belly! Another key thing when defending was to take the sword “off-line” – nothing to do with the internet, the line referred to was the line from the tip of my opponent’s sword to my poor undefended face or torso.

We tried a few different blocks, and the solid steel buckler was starting to get seriously heavy. Sword-fighting may not be a cardio workout, but it definitely counts as weight training!

Next we moved on to grappling. Y’see, the other use of a buckler, other than defending a tiny part of your body, is as a solid metal fist. In the face, in the chest, basically hit them wherever you can reach. We practiced this a little as well as grabbing the other person’s arms and stabbing them at close quarters too. Near the end I was paired with a guy wearing a fully padded coat, which was super fun because I could actually have a go at properly stabbing him!

And that was the end! I relinquished my sword and buckler, but not before taking a few selfies! I’ll definitely be back along next week! 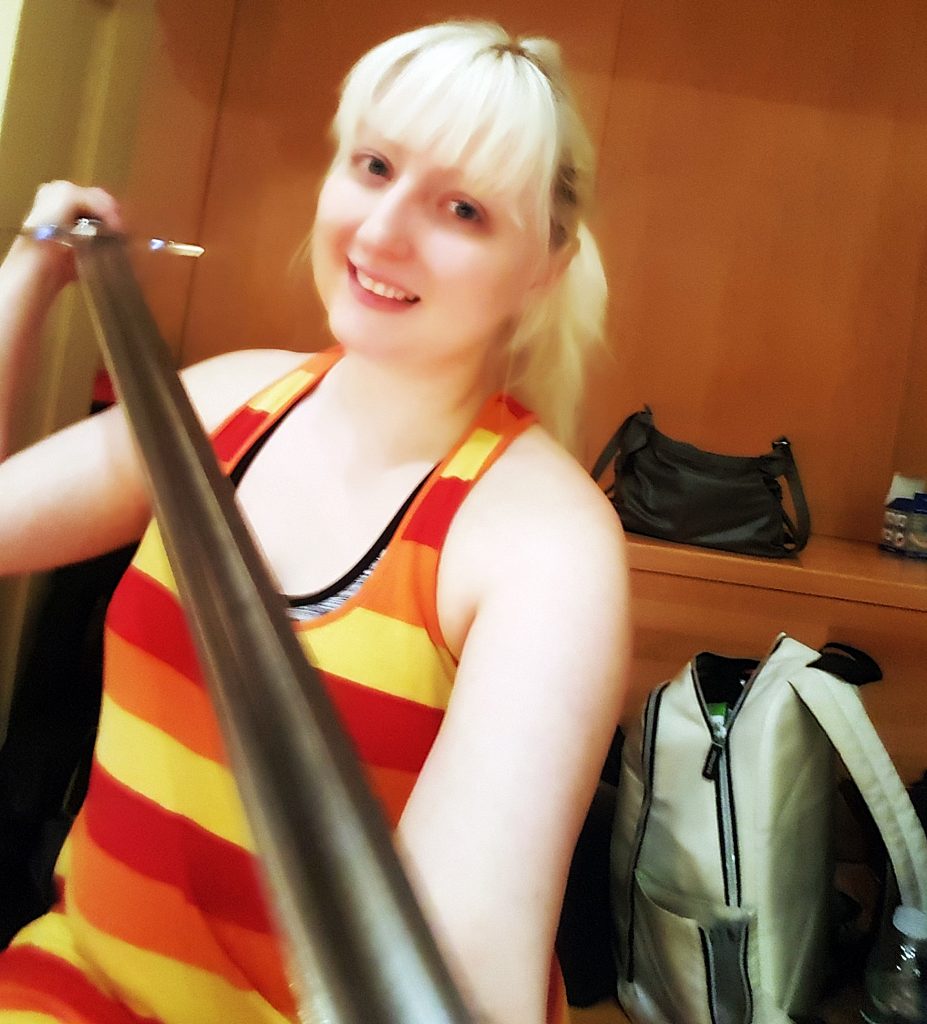 Leeds KDF meet on Mondays and Thursdays, 7-9pm, at the Royal Armouries in Leeds. Classes cost £7 and all training gear is provided. Newbies are encouraged to come on the first week of the month.