I’ve had Pokémon GO for roughly a week now, and in that time I’ve risen to level 10, caught 167 Pokémon, beaten precisely 2 gyms and gone over my data allowance.

What is Pokémon GO?

Clearly you’ve been hiding under a rock the past few days. Pokémon GO is the biggest thing on the planet atm. I mean, seriously, it’s already got more users than Twitter and is being used more than Facebook.

Well, if you have been under that rock, Pokemon GO is an augmented reality mobile game where users physically walk around the real world and catch Pokémon, visit Pokéstops, battle at gyms and amass XP to level up.

This post is just a mix of observations and anecdones, but if you want to know how to actually play there are a metric crapton of posts elsewhere about that. Try this or this or this.

My first few minutes on Pokémon GO were a blur. I downloaded the app from a non-official source because it wasn’t technically out in the UK yet. I rushed through the signup process, picking a username and outfit in a mad frenzy. And then I was in!

With a start, I realised there were Pokémon on my screen! Panicking and afraid they would disappear, I tapped on the closest one – Charmander.

A few flicks of my finger and Charmander was mine! Only then did I realise that this was supposed to be my opportunity to choose my starter Pokémon, between Bulbasaur, Squirtle and Charmander… and a hidden Pikachu, if you look hard enough.

Luckily, Charmander was the one I actually wanted, so I didn’t self-sabotage too much.

For the first time, I hated working from home. I had no real excuse to leave the house – work was crazy busy, and it was pissing it down outside – and so for the first 48 hours after getting Pokémon GO I didn’t do much with it. I switched it on every few hours to see if any nearby Pokémon were within catching range. I managed to get a Drowsee, a Zubat and a Magikarp quite quickly.

The Magikarp catch actually woke TC up – it appeared on my pillow and I just. Couldn’t. Catch. It! To catch Pokémon you have to flick a Pokéball at them, quite like the Paper Toss game. And I sucked at this at first. I was screaming at the stupid Magikarp that just didn’t like to be hit by balls! Eventually I figured that turning off AR definitely helped, and, well, practice definitely helps! 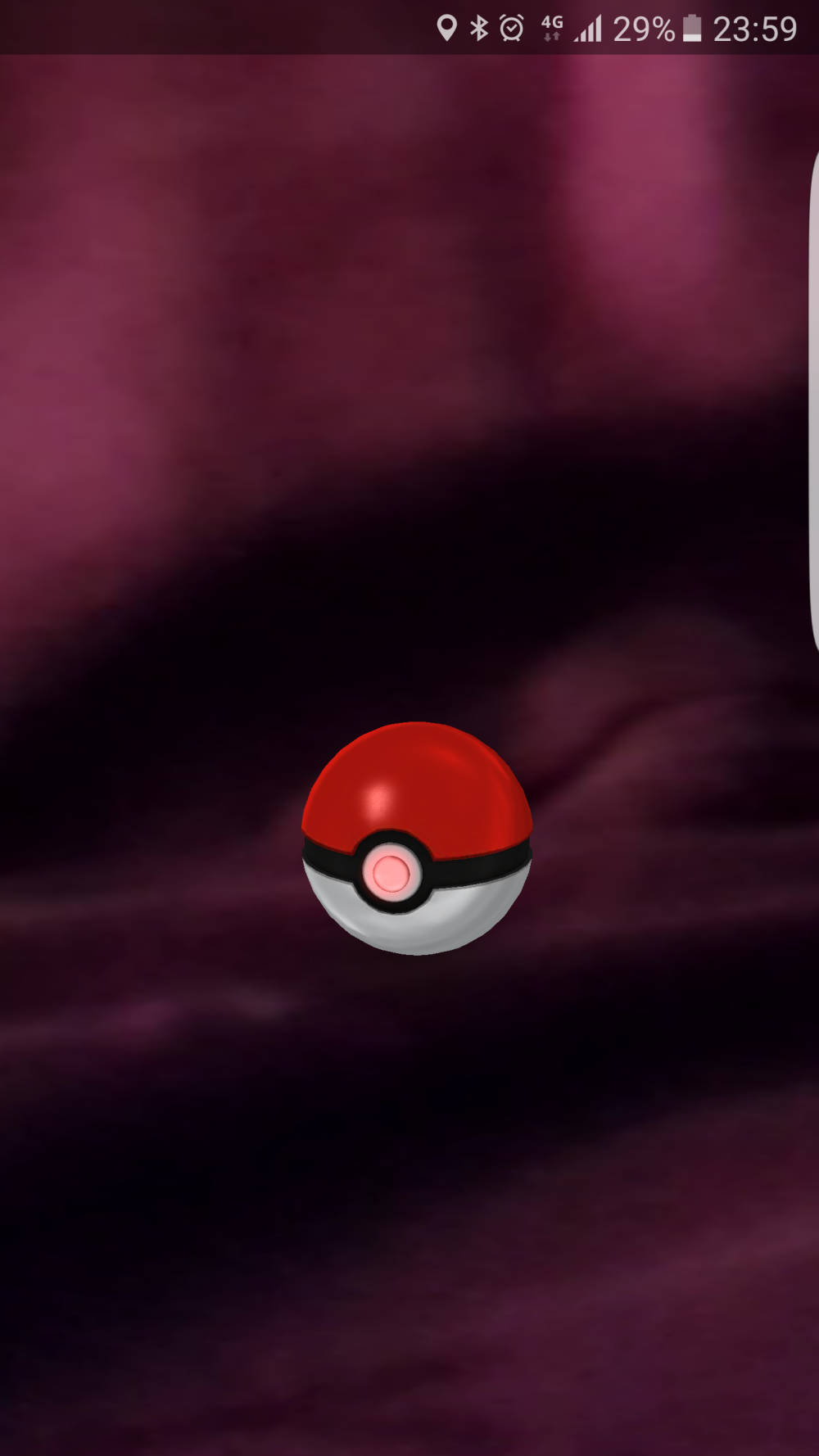 But, cooped up in the house, I saw hardly any other Pokémon. Eventually, I couldn’t take it any more. Screw the rain, screw work. I went for a walk.

And what a walk 😀 I caught SO MANY POKÉMON! Sadly it was after this walk that I discovered that it’s a good idea to catch Pokémon you’ve already caught (for the XP and Candy benefits), so I certainly missed out on some opportunities.

On my way back, I ran into the first Pokémon I failed to catch. A Gastly blocked my path. I flung Pokéball after Pokéball at it, and eventually it scarpered. It was later that I discovered the key to catching a Pokémon – to throw your Pokéball when the inner circle thingy is the smallest it can be. I also later on learned the “Curveball” trick – spin the Pokéball in a circle before throwing slightly to the side, and if you catch the Pokémon you’ll get a bonus 10 XP.

One of the things that’s quite hard to get at first is CP. I was expecting to see Pokémon with the normal 1-100 levels, but that’s not the case here. I’ve even seen a Pokémon with over 1000 CP guarding a nearby gym. I have no idea if there’s a limit. And evolution isn’t connected to CP or level – instead you have to feed a Pokémon a certain amount of “Candy”, which you get when you catch or transfer a Pokémon of that type.

Later that week I had a very sad lesson – trains don’t count as walking! I was thrilled to be heading out for the evening, and planned to walk to the station, catching tons of Pokémon on the way, then hatch my eggs (which hatch after being incubated for 2km, 5km or 10km) while on the train, dropping in at Pokéstops on the way, and then catch a few more at the other end.

Server failures screwed most of this plan up, and none of my eggs hatched as apparently you have to be going under 15mph for the movement to count.

Last Sunday was the Wimbledon mens final, and I’d planned a House Wimbledoning to celebrate moving in with TC (photos and recipes of the epic food to follow).

But yeah, I couldn’t really resist when, halfway through the third set, I spotted that the Pokéstop JUST DOWNSTAIRS (like literally 20 seconds from my front door) had a Lure attached to it. Lures are modules you can attach to Pokéstops to attract more Pokémon to the area around them. Someone had done so basically outside my window… so it would be rude not to! 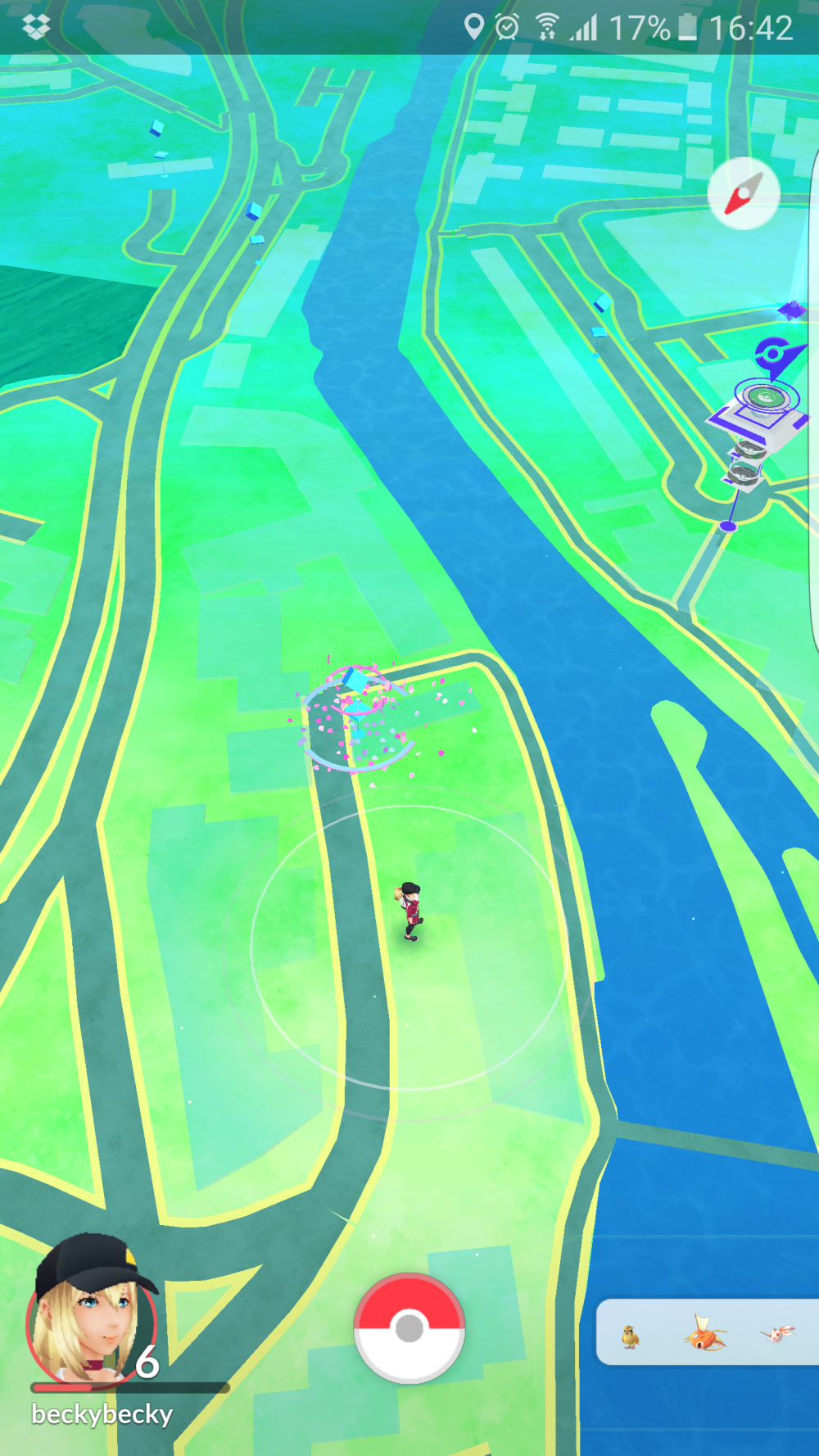 Luckily one of our guests, Rob, also plays Pokémon GO, so I wasn’t being completely rude. Sadly we didn’t catch much 🙁 and we headed back up again soon.

Later, after Murray won (GO MURRAY!), my friend Keeleigh and I decided to go for a walk to work off the crazy amounts of food I cooked (seriously, keep an eye on the blog for that food post!). Well, she wanted to walk off the food, I wanted to catch Pokémon. I’m not sure we had the most engaged chat on that walk, but I caught an Oddish 😀

I also made it to level 5 that day and got to choose my team. The team choices are Red, Yellow or Blue, like the original Pokémon games – also known as Valor, Instinct or Mystic. There was only one choice for me: 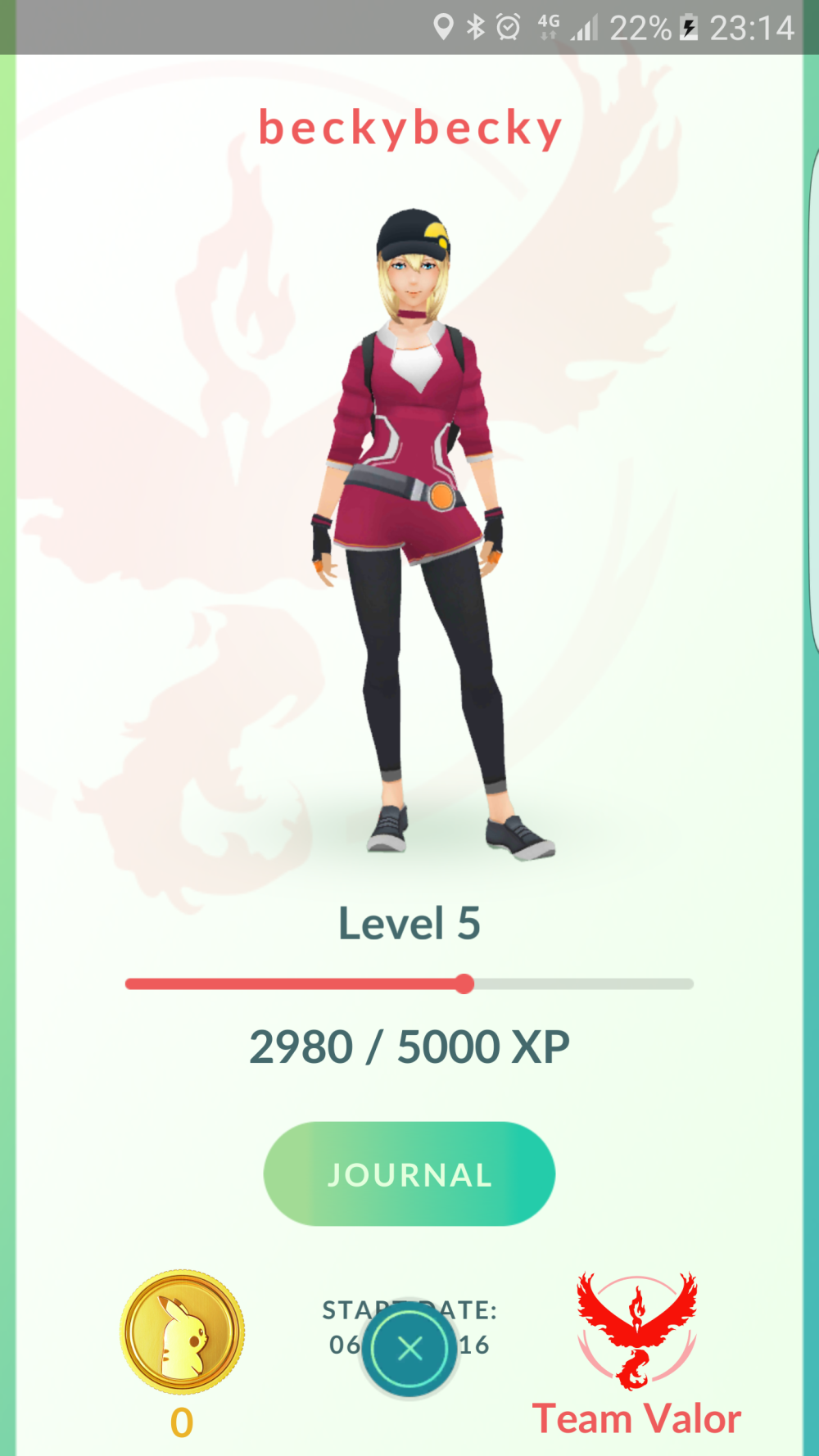 I had a meeting in Manchester that lunch time… but by the time I’d got there I had run out of data completely! I had to call up Vodafone and get some extra data added just so I could find my way around the city. It was partly due to tethering my laptop to my phone during my train ride to Manchester, but I don’t doubt that Pokémon GO played a part in the complete decimation of my data.

Poké-Date and my first Gym win

I finally persuaded my boyfriend to take me on a Poké-date on Wednesday night. Now, TC doesn’t play Pokémon GO, and doesn’t really see why I’m so crazy about it. But my nagging paid off and we went for a half hour walk around Leeds Dock, the nearest Poké-heavy area to me. 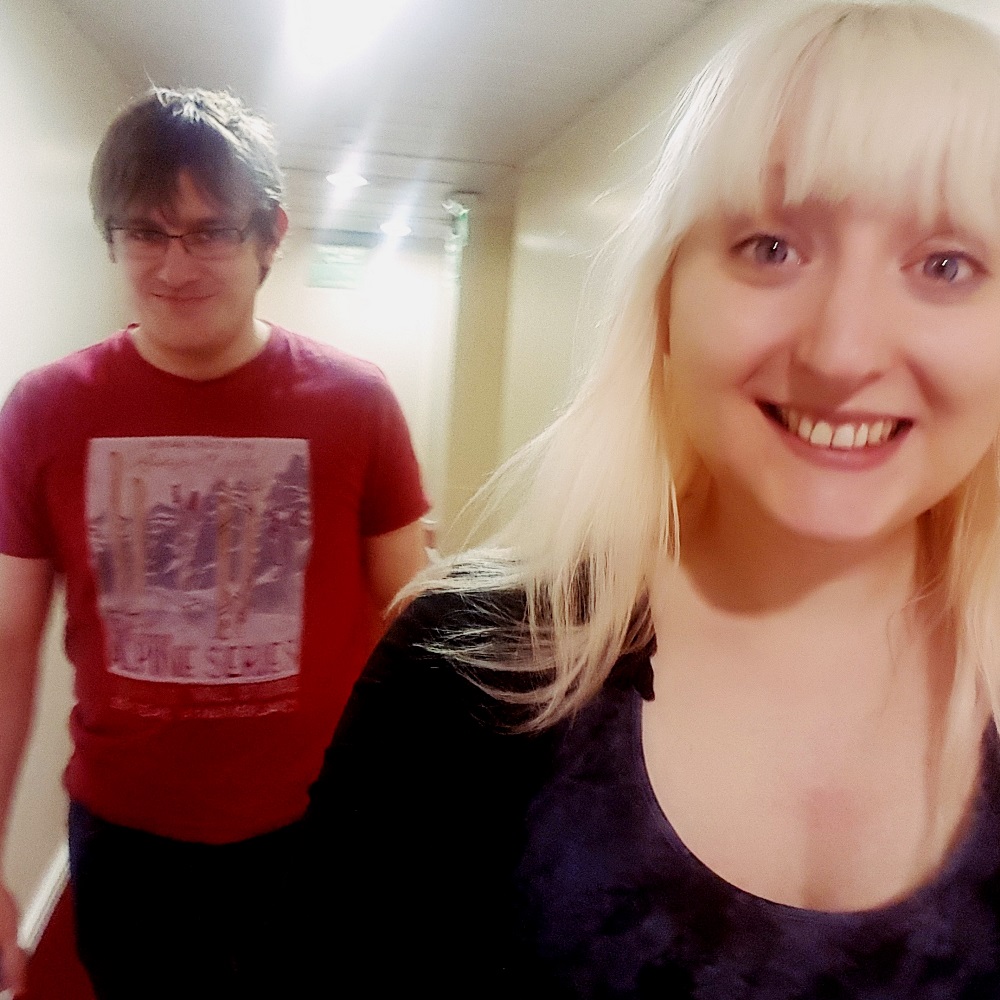 I actually absentmindedly put on odd shoes, I was so excited to go. 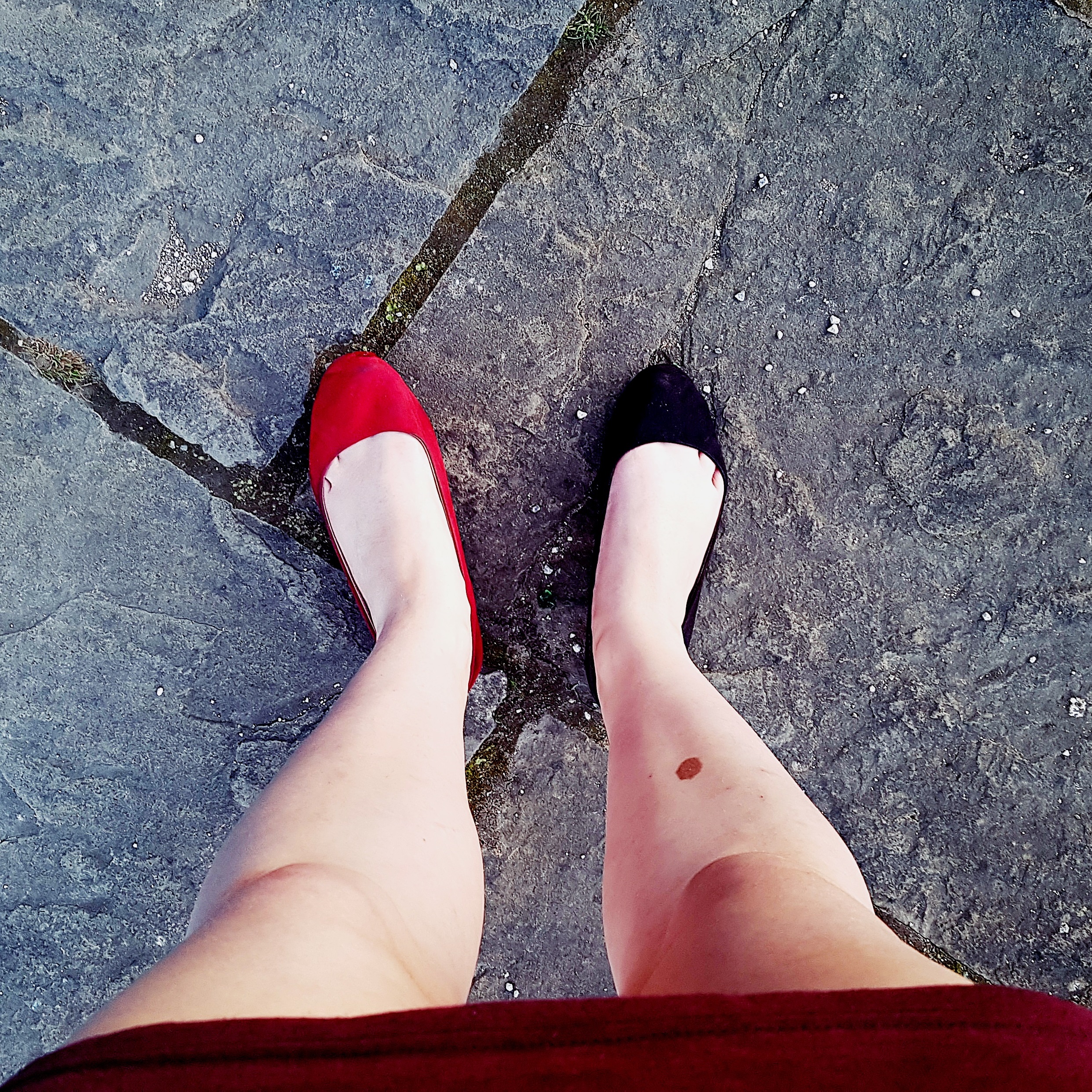 I was thrilled to see two different Lure-stops at the Dock. Lures also have a habit of attracting tons of Pokémon trainers, and I had the pleasure of meeting my first trainer-in-the-wild. He was about 10 levels above me, but we had a nice bit of banter about Red vs. Blue and that Rhyhorn we’d both just caught.

Then, excitingly I managed to beat my first Gym! I went up against two Pokémon. First, a 250 CP Rhyhorn identical to the one I’d just caught… my Rhyhorn mostly wiped him out and my Psyduck finished him off. Second up, more scarily, was a 465 CP Scyther. I was convinced it was over. Luckily, my combo of a reasonably strong Pidgeotto and sheer battering by my poison and psychic backups wore it down. I won!

Now, luckily I had been warned ahead of time that beating a gym once wasn’t enough to take it over. But I battered the Scyther a second time (it seemed much easier the second time round), and then… the GYM WAS MINE!!!

Sadly, all my strong Pokémon had been knocked out during the battle, so I stuck a 150 CP Poliwhirl atop it. As I saw the Pokémon trainer I’d met earlier heading towards it, I knew it wouldn’t be mine for long… but it was mine for a moment and I will never forget that! 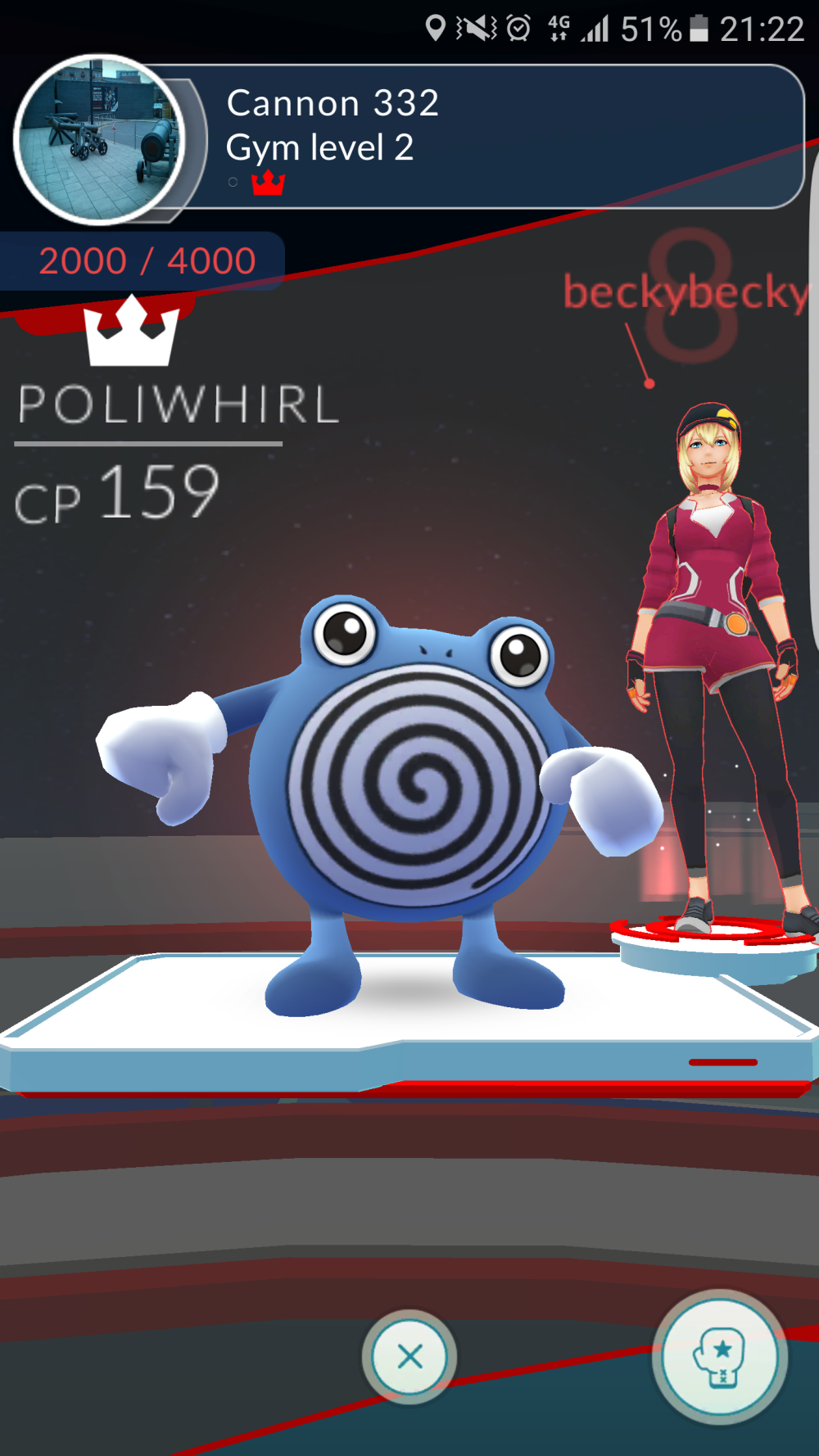 Elated, TC and I headed home…

And yesterday, as I write this blog post on my lunch break… I was in a Starbucks that had a Lure attached to the Pokéstop right outside it. This played absolutely no part in my choice to eat here, honest… and the distribution of Pokéstops hasn’t permanently affected my walking path.

Last night, meeting a friend for dinner, I was ecstatic to hear he was running late. It gave me the chance to go for a wander, managing to catch both Dratini and Dragonair, and to beat my second gym 😀 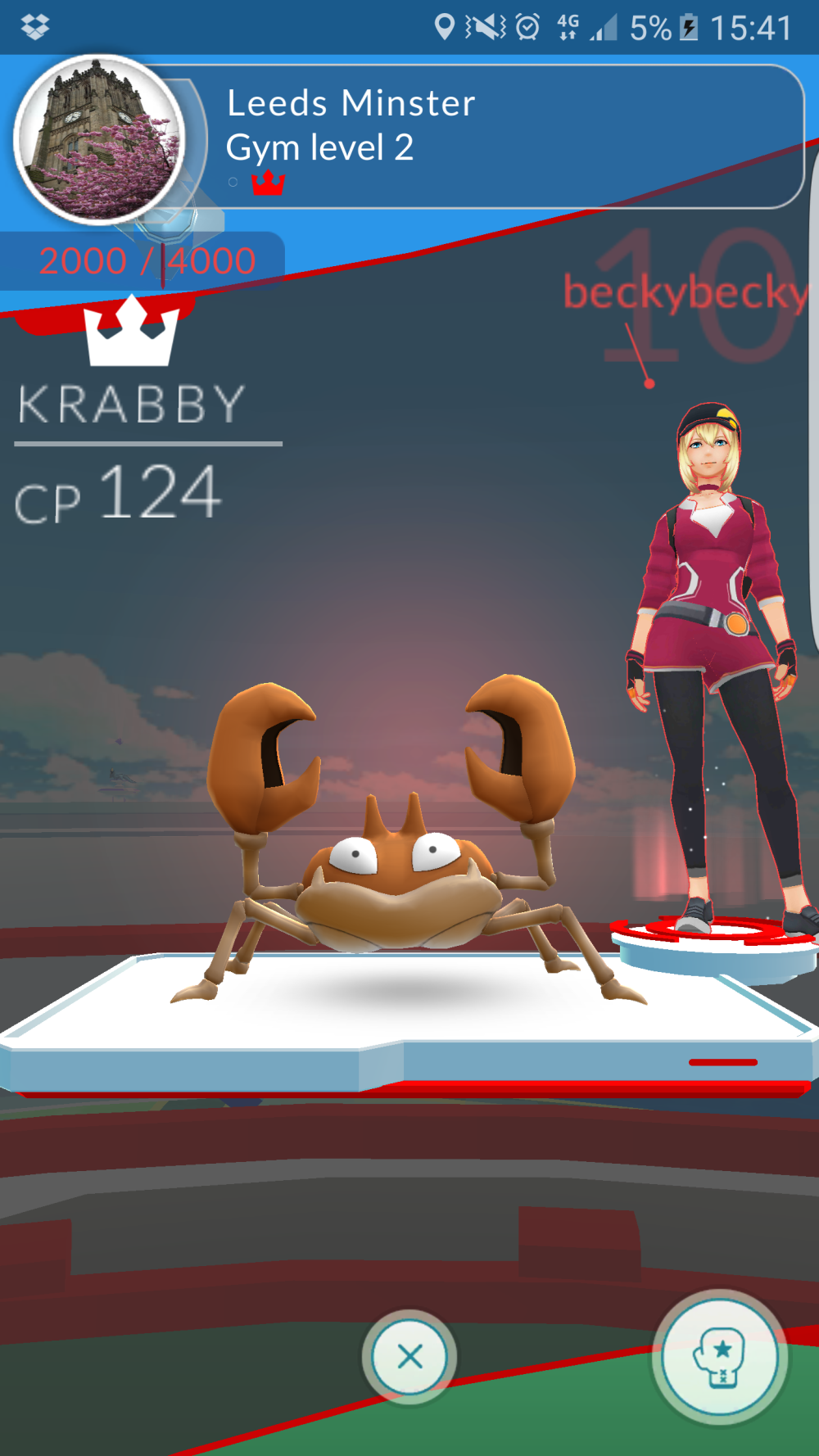 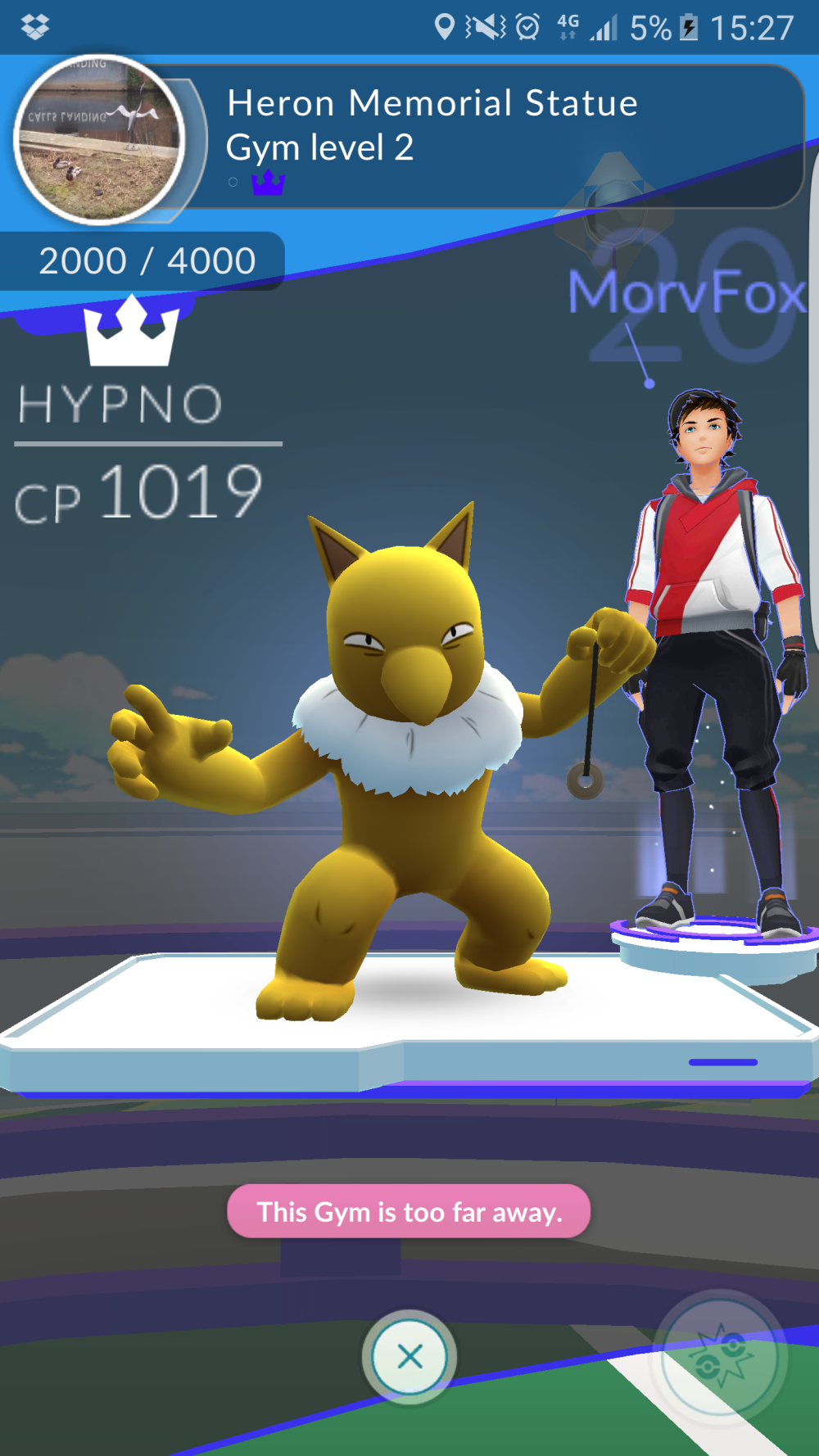 How has Pokémon GO changed my life?

Now I play Pokémon GO when walking anywhere, rather than calling friends and family to catch up with them.

Now I can’t help but glance at the mobile screens of people around me.

Now whenever I see a gang of people with their phones out I naturally assume they’re playing GO. 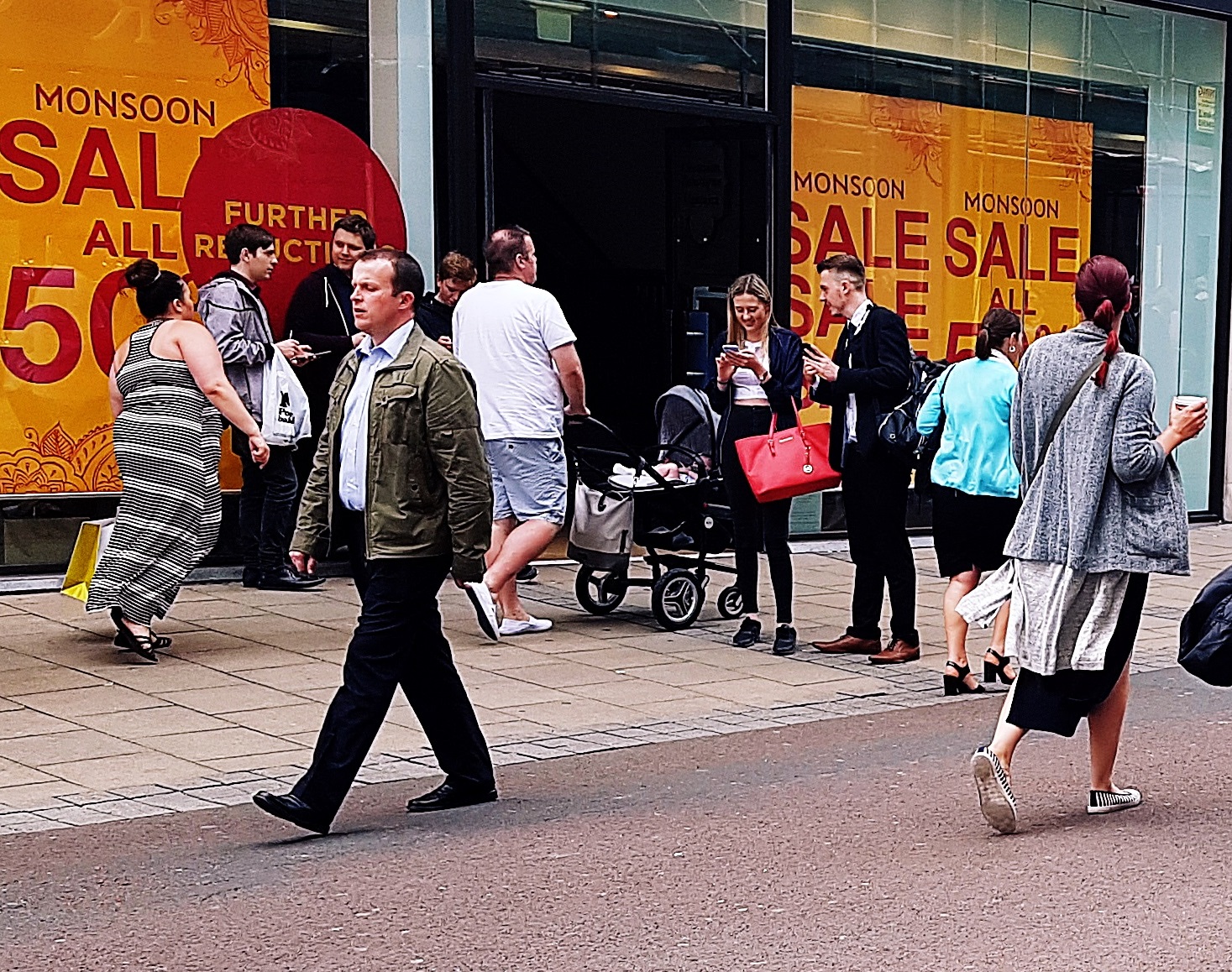 Are they playing GO or just texting?

Now I share knowing smiles with other people with their phone out.

Now I walk in a much more circuitous route to places and leave earlier so I have time to stop en route to catch a new Pokémon.

Now I frequently stop dead in the middle of the pavement, before moving awkwardly to the side of the path to get out of people’s way.

Now I frequently almost try to throw Pokeballs at other people’s pets. 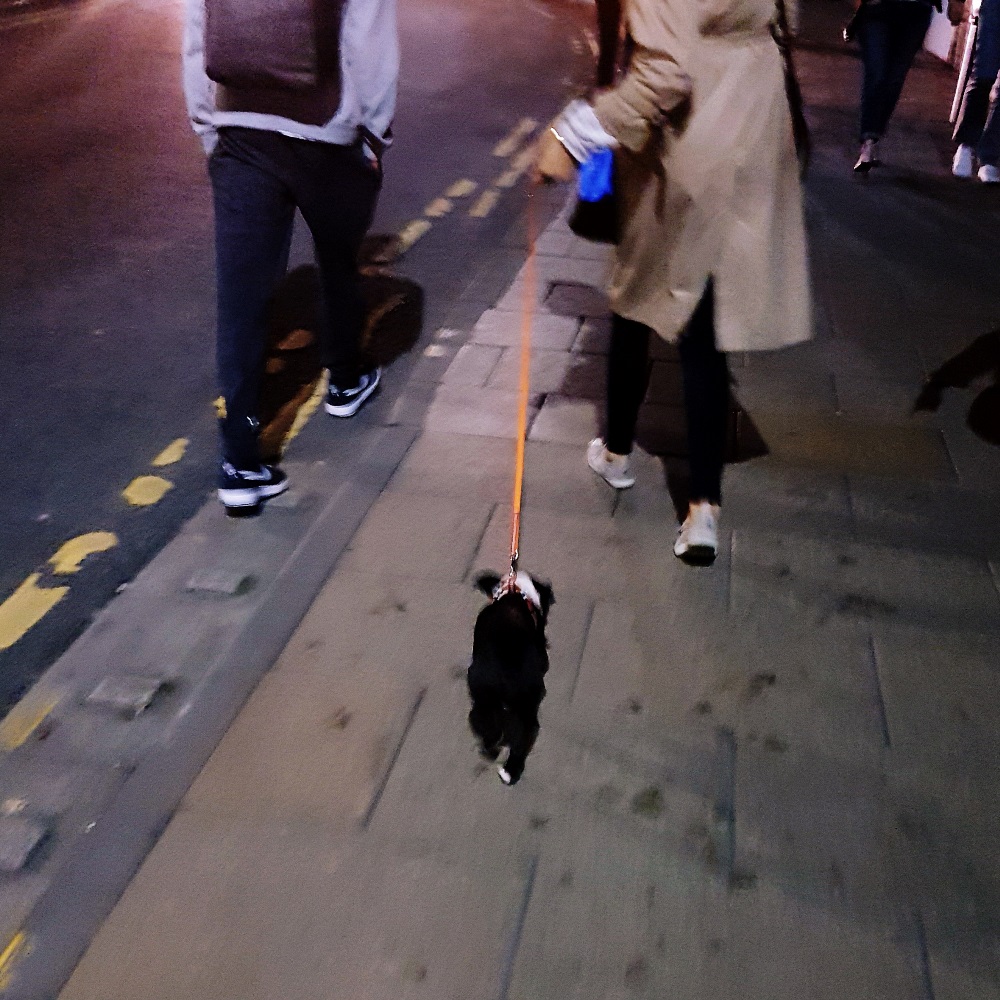 The dog I almost tried to catch

Now I might have to up my data allowance.

Why I am SO excited about Pokémon GO

THIS REPRESENTS THE NEXT GEN OF SOCIAL NETWORKING.

It’s done what no other social networking site has truly succeeded in, without even trying.

It’s making people TALK TO EACH OTHER IN PUBLIC.

It’s bring people together with strangers. It’s connecting people. And there is zero facility for that in the app at the moment.

Without a dedicated section of the site.

Instead, small businesses can buy a Lure for a Pokéstop near them, and see the crowds flood in.

And it’s been out for ONE WEEK.

Total Pokémon caught: 167 (caught an Oddish while checking this number) 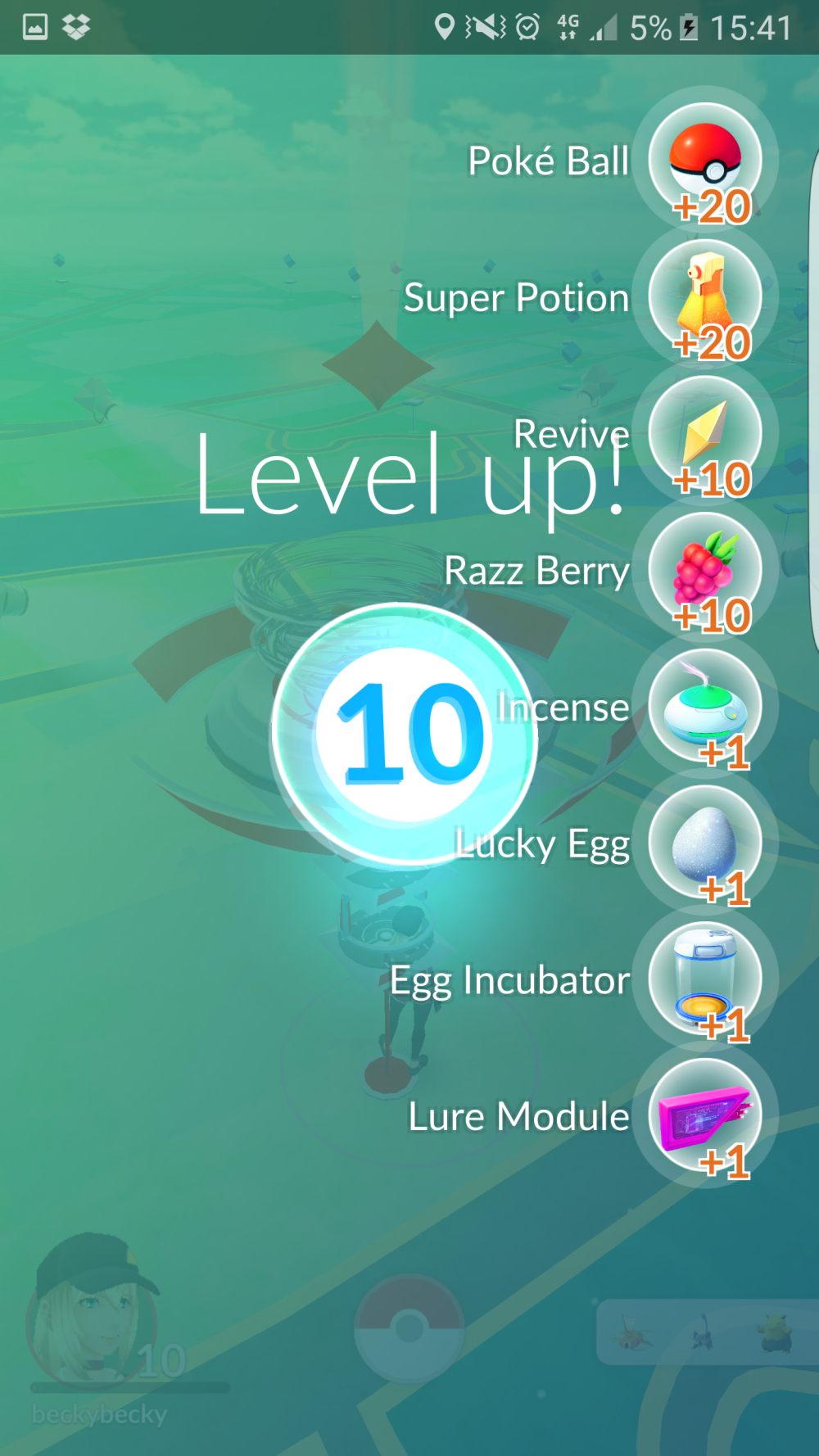 Are you playing Pokémon GO? Share your crazy stories and more below!

I've always loved a good murder mystery: the tension, the thrills, the twists. Classic murder mysteries are good on their...