Top Posts
How to Moulin Rouge, Secret Cinema Style
7 Habits of Highly Effective Megagamers
Our Finest Hour: Leeds Escape Room by Escape...
Urban Nightmare: State of Chaos – the First...
How to Write a Megagame Part 1: Choosing...
Game of Alchemy, and Megagames vs LARPs
Goodbye Everybody Dies…
How to Write a Megagame Part 3: Scoping
Undeniable Victory: Megagame Report
Ladies Who Megagame
Home Reports and Reviews Money and Me with giffgaff gameplan

Money and Me with giffgaff gameplan

If you know me at all, you know I’m not exactly good with money. I’m pretty dreadful with it to be honest. If I have it, I tend to spend it.

But I’m twenty-frigging-seven, so it’s time I get that sorted out, right? I’ve finally got a normal job with a regular paycheck, so there’s no time like the present.

So when I was invited along by giffgaff to play their Spend Or Save boardgame and learn a bit more about their new personal finance app launching soon, I figured it was worth looking into. It’s not like it could make me any worse with money!

The evening was held at Cuckoo Leeds, which is probably one of my favourite bars in the city. I went along to their launch earlier in the year, and next month I’ll actually be going to the opening of the Fairground Rooms, located upstairs from their main bar.

And the area that is becoming the Fairground Rooms is actually where the giffgaff event was held. Bright colours and whimsical figures adorn the walls, and we were greeted with a welcome glass of bubbly. 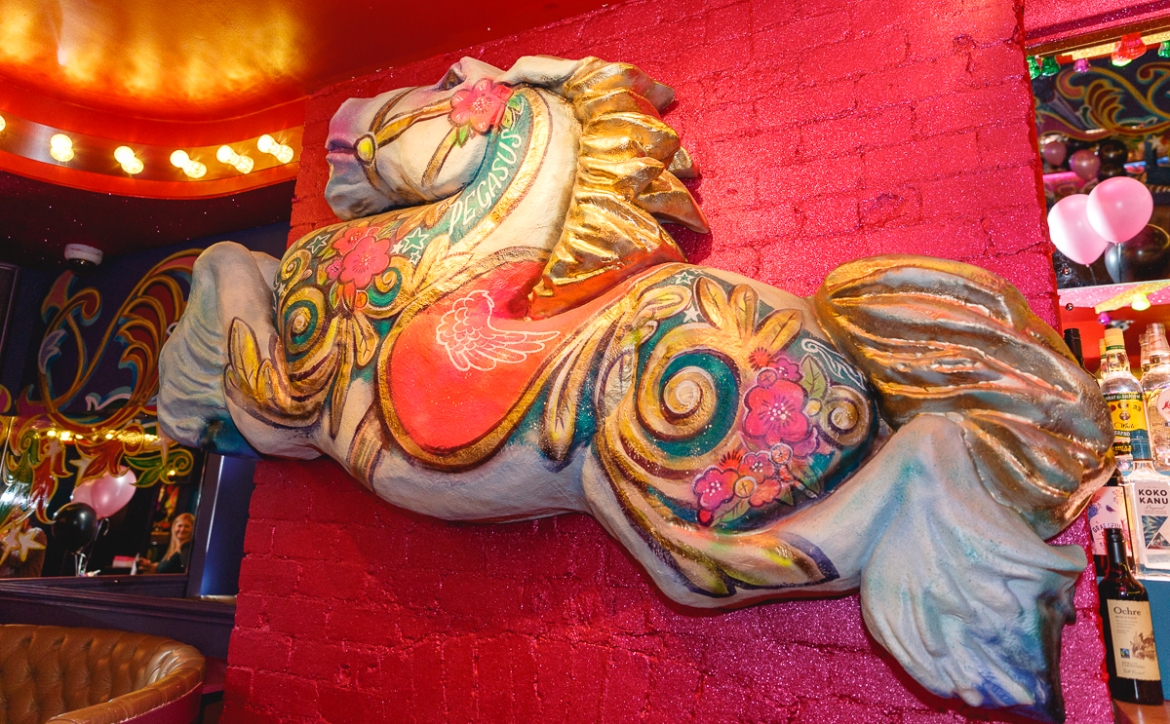 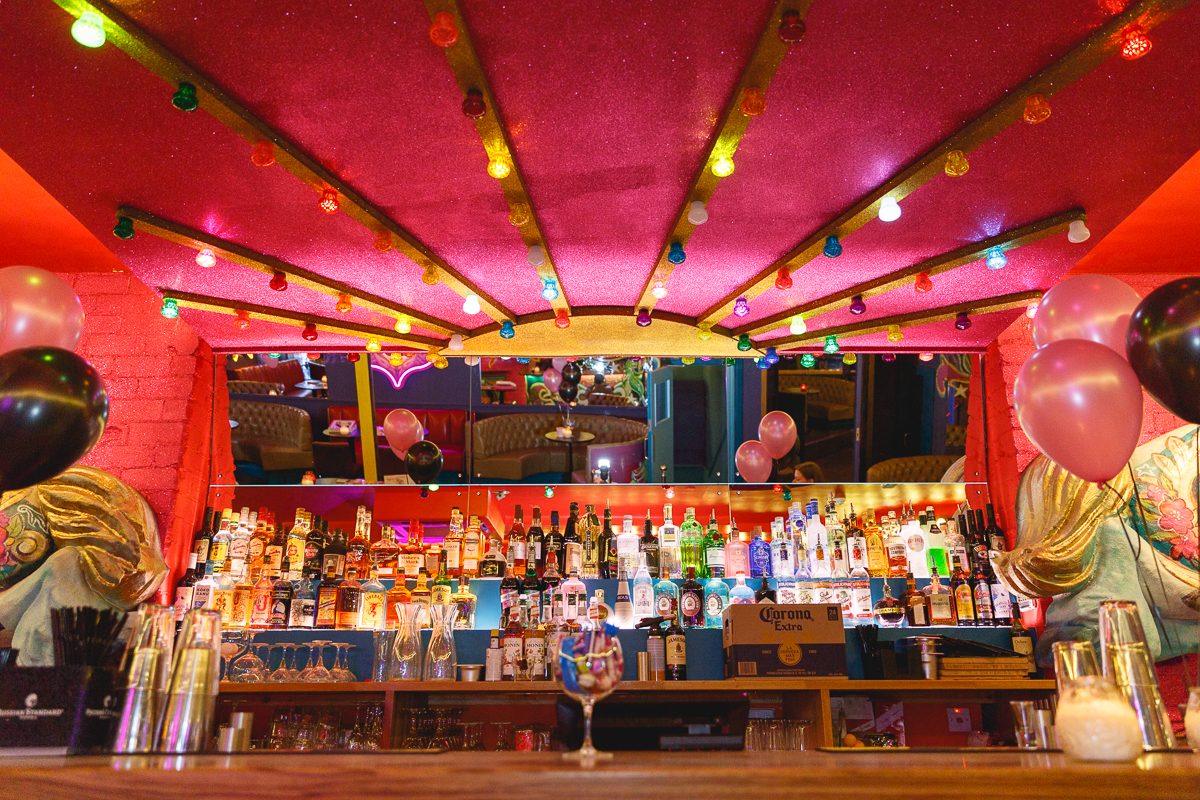 First up was a short intro talk from giffgaff about their upcoming app gameplan. We learned all sorts of kind of shocking facts about personal finance, such as the ridiculous number of people who don’t have any sort of financial plan, or significant savings (including yours truly). giffgaff is aiming to change that by making it considerably easier for people to be knowledgeable about their financial situation. They’re starting off by providing a free credit check. And the full app sounds like it will be handy for keeping an eye on your budget on an ongoing basis.

Next we had some of Cuckoo’s famous pizzas (my favourite is still Nacho Lucky Day) and before long, it was time to play the board game. 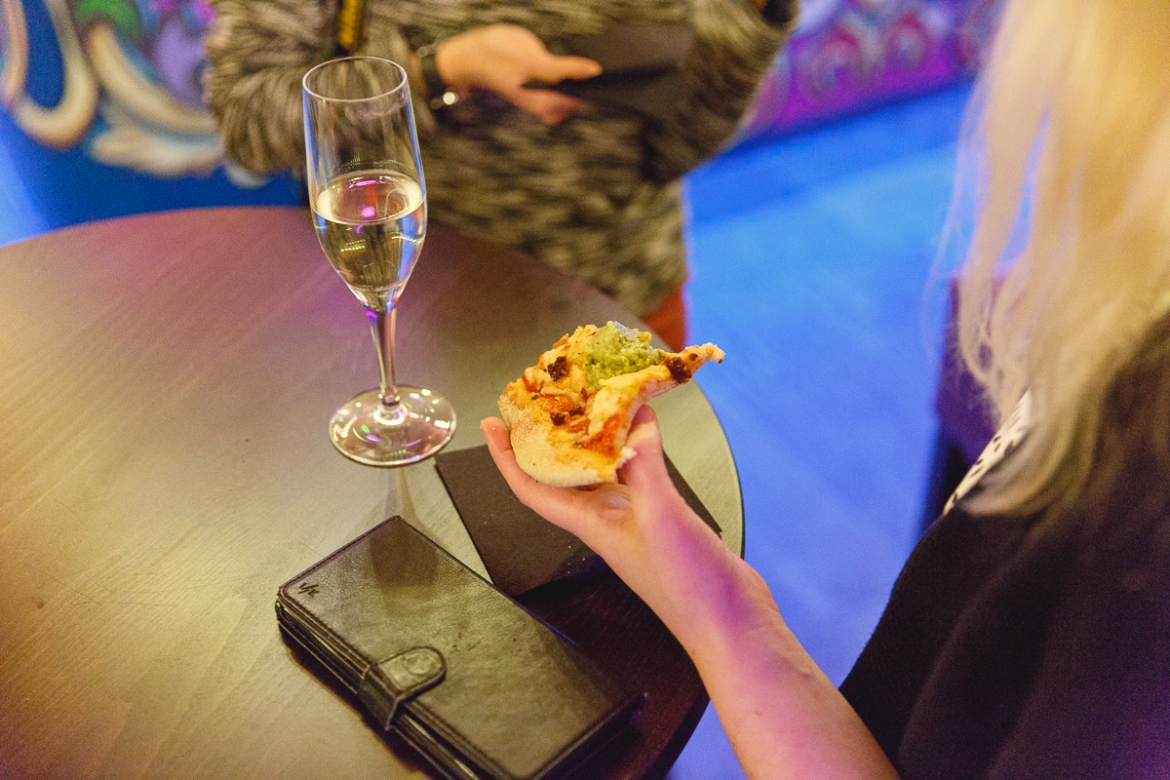 giffgaff Spend or Save

I’ll be honest… if this was a boardgame review, I wouldn’t be giving it a favourable rating. Luckily the focus was more on the financial education than the game mechanics, but as a true gamer I can’t not critique it. 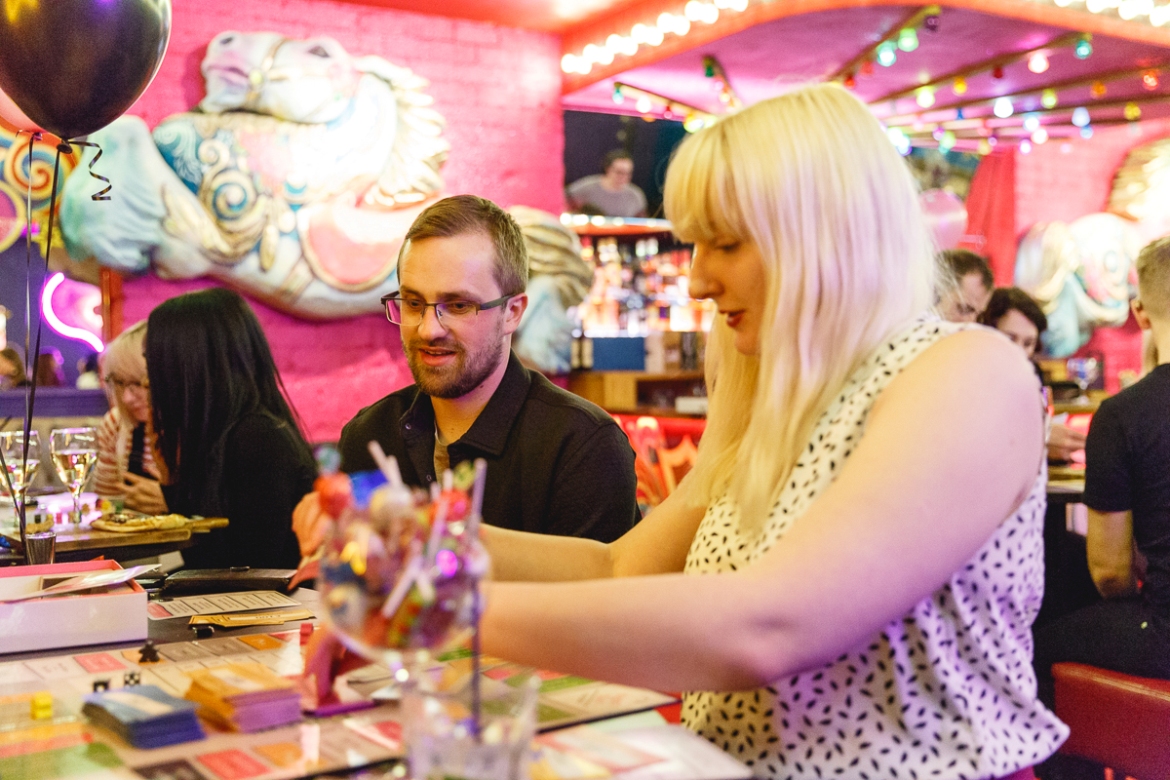 The game was based on Monopoly (generally regarded by the board game community as one of the worst balanced, random and drawn-out games out there), and honestly a lot of their changes made it worse from a gameplay perspective. Myself and another player in my team were out of the game before we’d made a full lap of the board: her by means of a Nigerian prince, and myself thanks to getting myself pregnant with triplets. My megagame instincts led me to ask if I could get an abortion to stay in the game. Sadly, it wasn’t that sort of game. 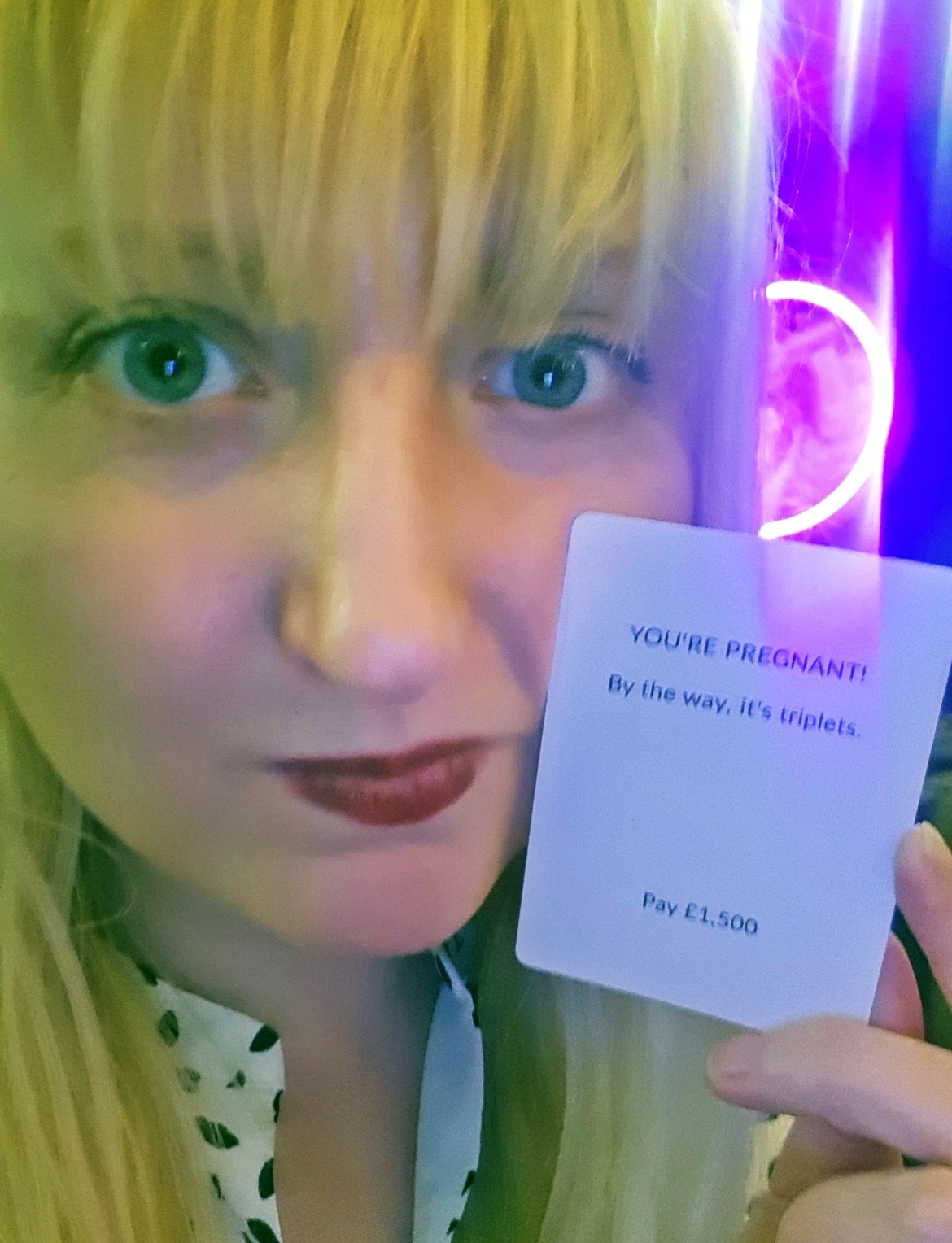 Luckily our fellow players allowed us to keep playing, just for fun. However, we were knocked out of getting the prize (£500 donated to the charity of our choice).

Like Monopoly, we circled the board and landed on a variety of spaces. Most were money sucks (here bills like electric, rent or a holiday, rather than houses and hotels). We aged 5 years every time we completed one circuit, and somehow I rolled so badly I was still in my 40s when the rest were approaching retirement. 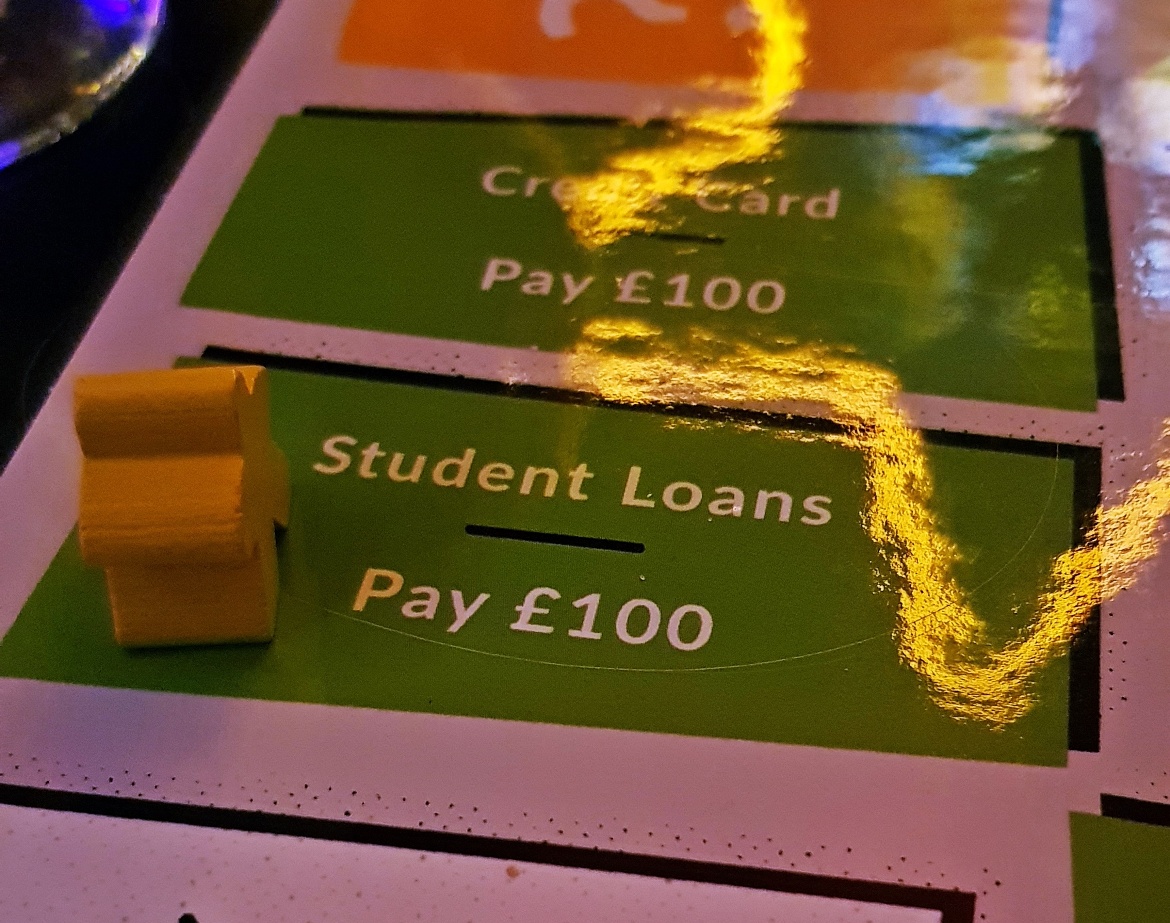 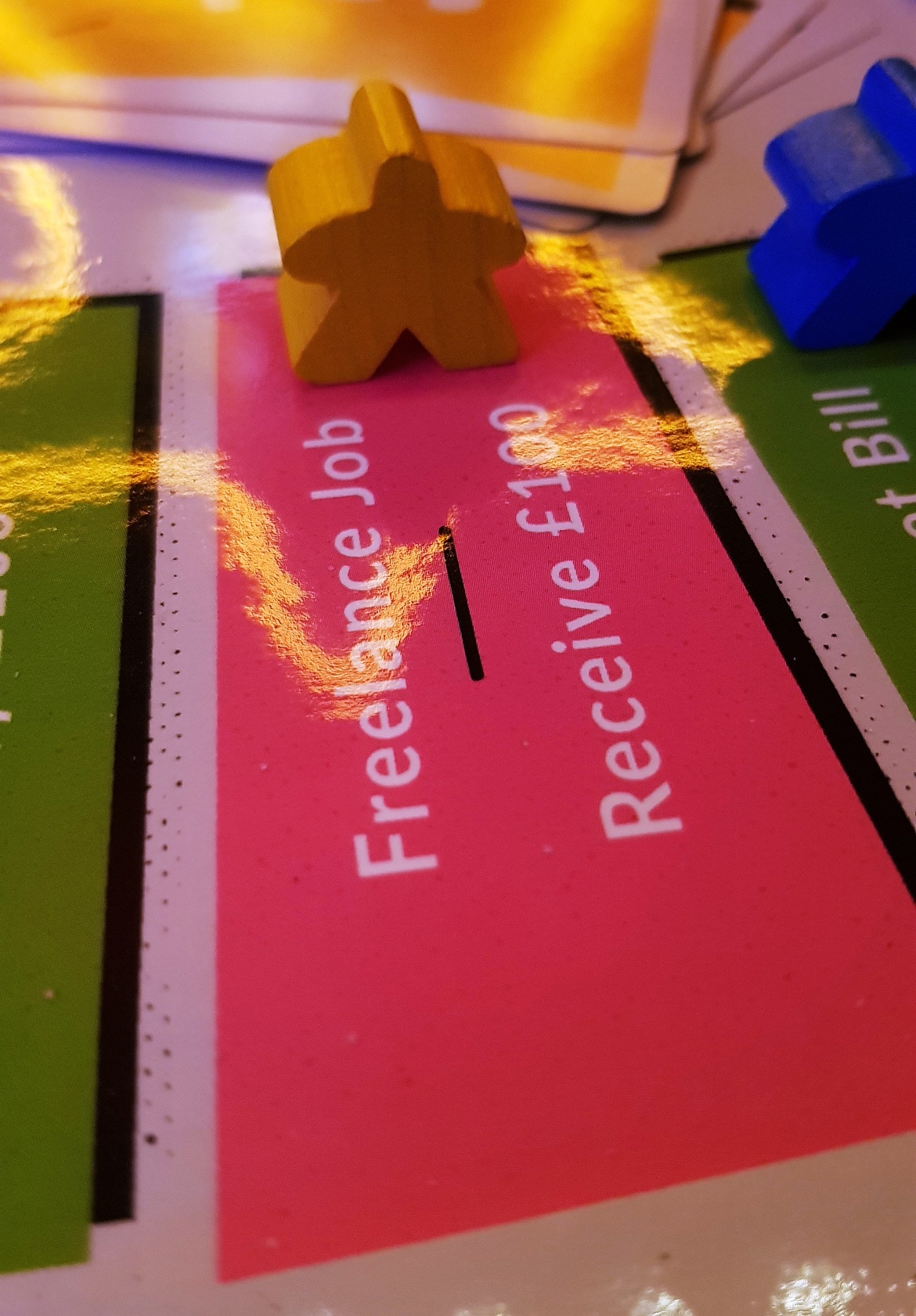 The chance cards, despite spelling my downfall, were the most interesting part of the game. Some in particular were totes relateable. 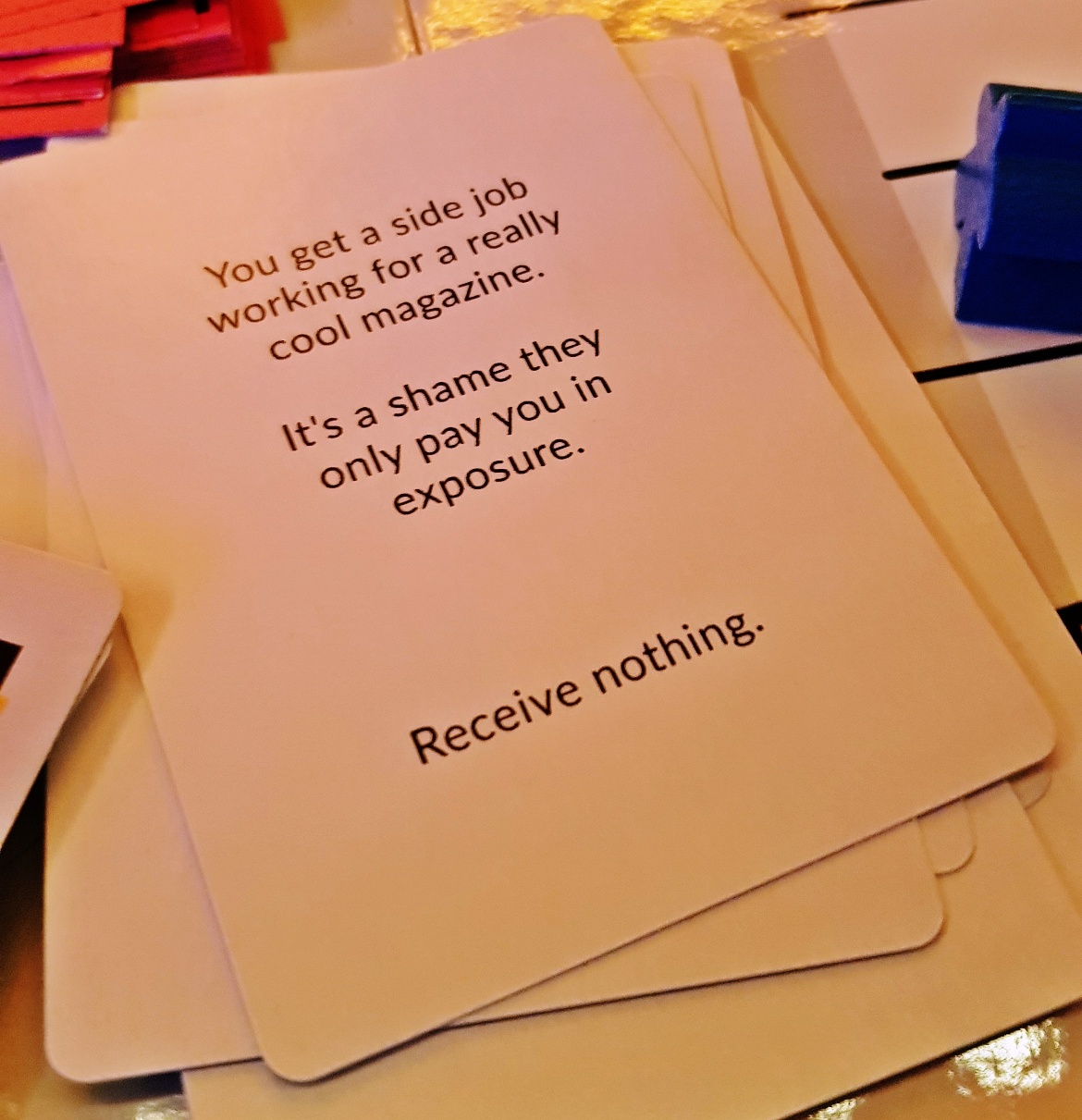 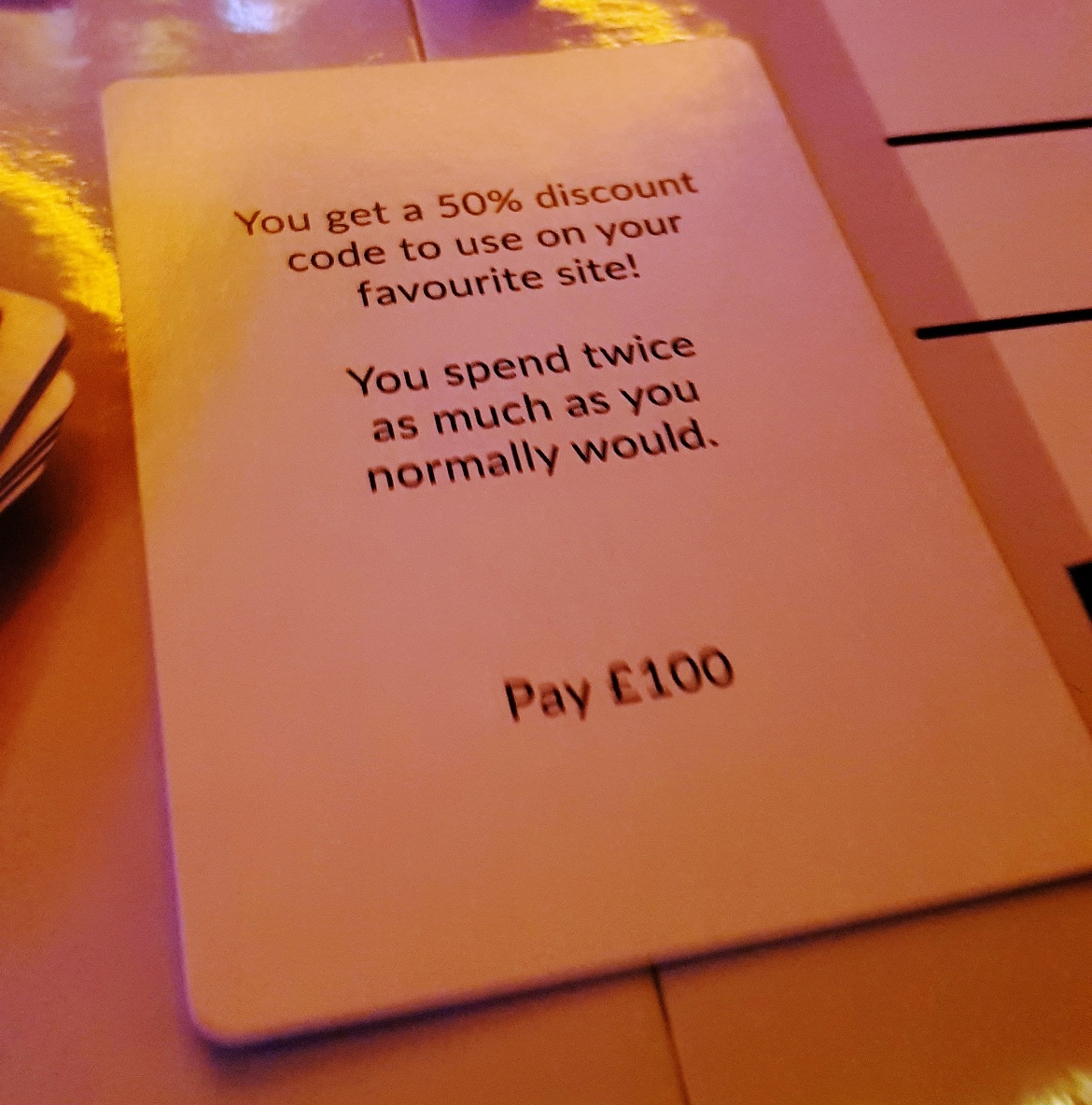 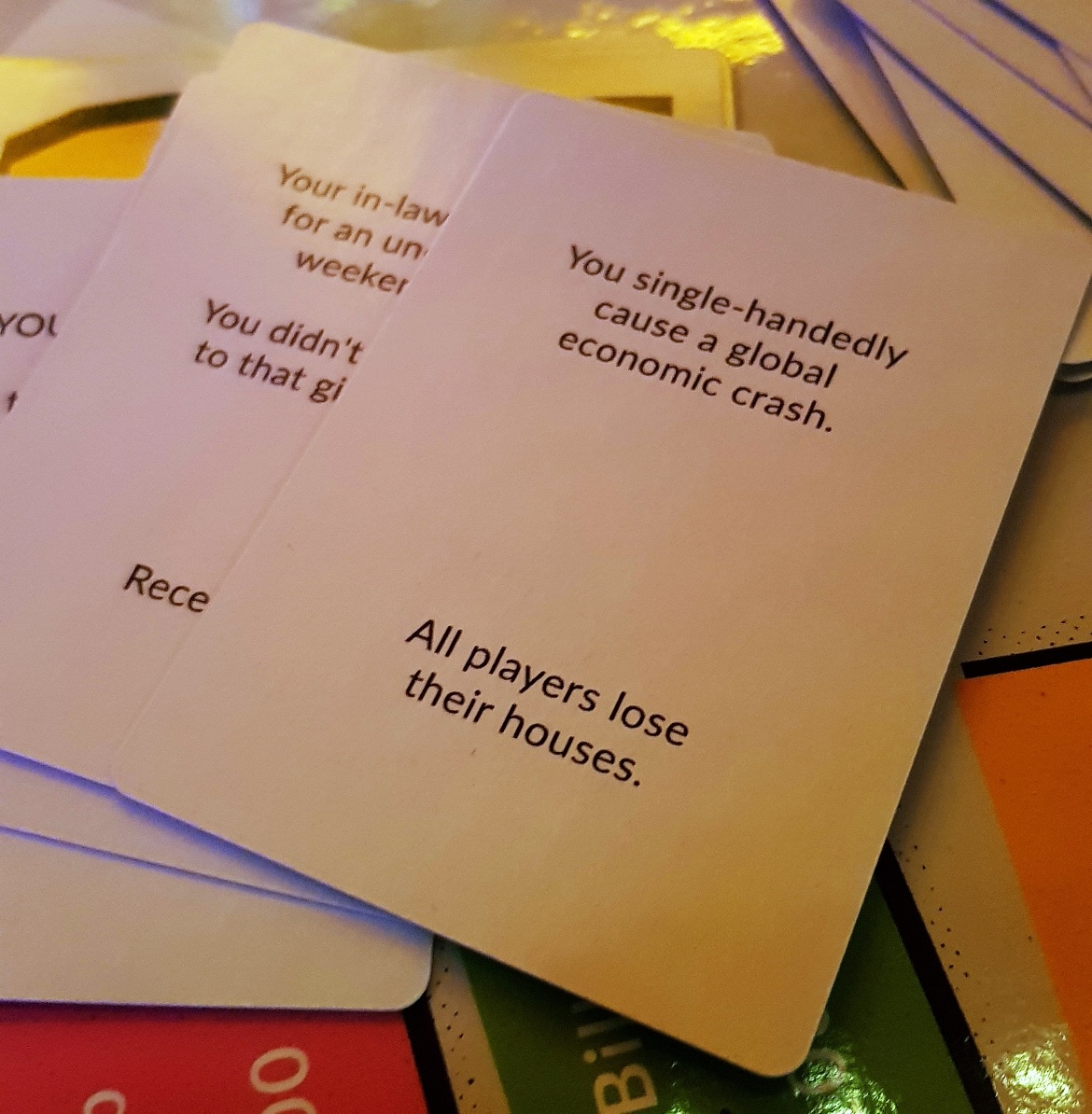 As time went on, we had the opportunity to invest in various financial planning options. You could get an ISA, buy a car or a house, or strategically get married for the tax breaks. Somehow it was possible to magically meet someone willing to marry you, as soon as you scrounged up a stingy £3000 for the wedding.

My own story was a comedy of errors. Following the pregnancy, I fell for a tall handsome stranger… who turned out to be a con man. I got divorced (note – not married yet!). I finally got a few lucky breaks, but when I splashed out on a mediocre wedding, I was immediately bankrupted for a third time thanks to a mobile phone bill. When I got some money together, for some reason I spent it on not one but TWO ultraHD TVs. Considering I was fairly sure I was living in a box by this point, it seemed a bit over the top. 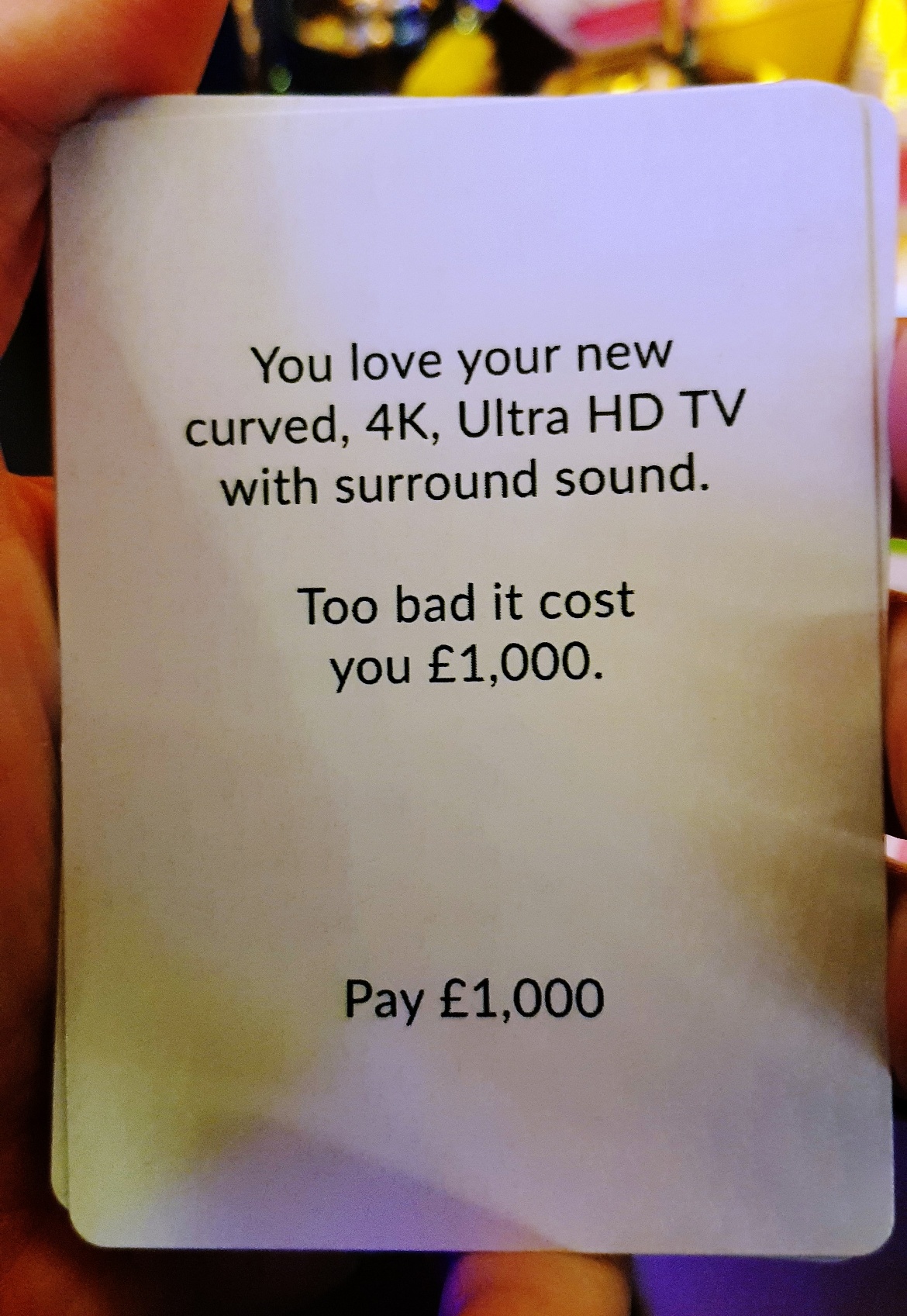 Finally my sister had a baby and I was bankrupted for the fourth and final time by her baby shower gift. The rest reached retirement age and the game ended.

What I learned about money

I learned never to trust a Nigerian prince and children are expensive, even if they’re not yours.

Okay, seriously. I learned that I definitely don’t think enough about my finances. I’m eagerly awaiting the launch of giffgaff gameplan, and in the meantime I’ve downloaded a couple of other apps that I’m hoping will help me keep more of an eye on my spending.

What do you do to track your spending? Do you have a budget? And most importantly… where did I go wrong in the game??

I was invited to giffgaff Spend Or Save free of charge, but all opinions of personal finance and Monopoly are my own. Here’s my full disclaimer. The nice photos were provided to me by giffgaff.

How to be One of The Lucky Ones (Spoiler Light)

"You have to decide."   It had all come down to this moment. I couldn't play both sides off against...