For the past couple of weeks, my boyfriend and I have been playing through L.A. Noire.

In case you haven’t heard of it, L.A. Noire is a film noir-esque detective game. It’s set in the 40’s and follows Detective Cole Phelps, a overly modest war hero, a loving and devoted family man, and a stand-up protagonist (honest).

So I don’t have to go into tons of detail, here’s the trailer:

It was a great game for us to play together. While it’s not generally a co-op game, it splits quite neatly for us – he does the fighting and driving, and I do the talking, investigating scenes and solving crimes. We pass the Xbox controller between us – sometimes more frantically than others.

After the tutorial, we started off in Traffic. We’d go on to work on four different desks – next would be Homicide, then Vice, then something I can’t tell you…

Driving Each Other Mad

Driving caused a fairly big rift between us quite early on. It’s set in a fairly open world which you can drive around at will in-between your cases, and you’ll often get called off on side-quests when you’re travelling between crime scenes. Sometimes you’ll be allowed to use the siren (CODE THREE), sometimes not. And sometimes you’d get into a car chase with a suspect, and even have to take a civilian’s vehicle to do said chase.

But basically TC drove like he was constantly in one of those car chases. He didn’t slow down for corners, he drove on the wrong side of the road, he had so many near misses I lost count… the only reason no pedestrians died on his watch is because they’re basically ninjas. And all his in-game partner would do was drop some witty one-liner about the department paying for any damage! I mean, they would, but every dollar of damage affected our game score! Needless to say, I gave in an earful or two about his driving and swore never to get in a car he was driving IRL. 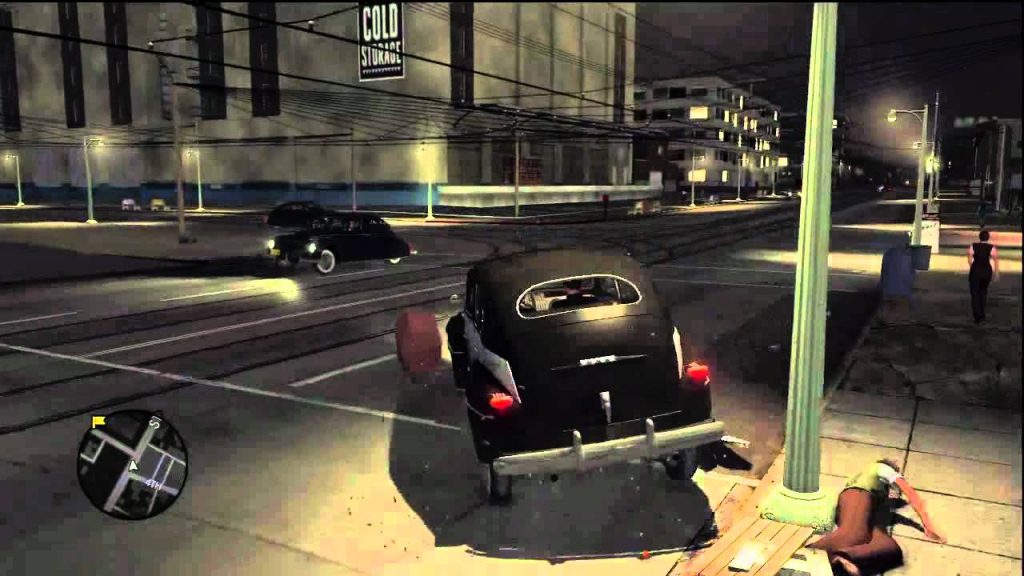 When I got the chance to drive… well, I stuck to the (totally existing) speed limit, stayed on my side of the road and didn’t use the siren. Which was totally dull. And the one time I went faster, I ploughed into a bench with a guy sat on it. I think I actually managed to kill him. He wasn’t moving. I sort of giggled maniacally until TC took the controller off of me.

Its big “thing” is that all of the actors were filmed with surround cameras to capture every little micro-expression, which means that you really do have to watch the suspects to work out if they’re lying. You get three options during interrogations – Truth, Doubt or Lie.

The interrogations took a bit of getting used to. The Truth/Doubt/Lie choice is a little misleading. A couple of times I was like “but I really do believe him! I believe that he doesn’t give a damn!” but the right answer was Doubt or Lie.

Lie was used when you had some definite evidence against him. Doubt and Truth seemed to really mean “do you want to go hard or soft in your questioning?”. And sometimes the further bit of in-game conversation after choosing Lie before I got to present my evidence ruled out the evidence I thought I had. 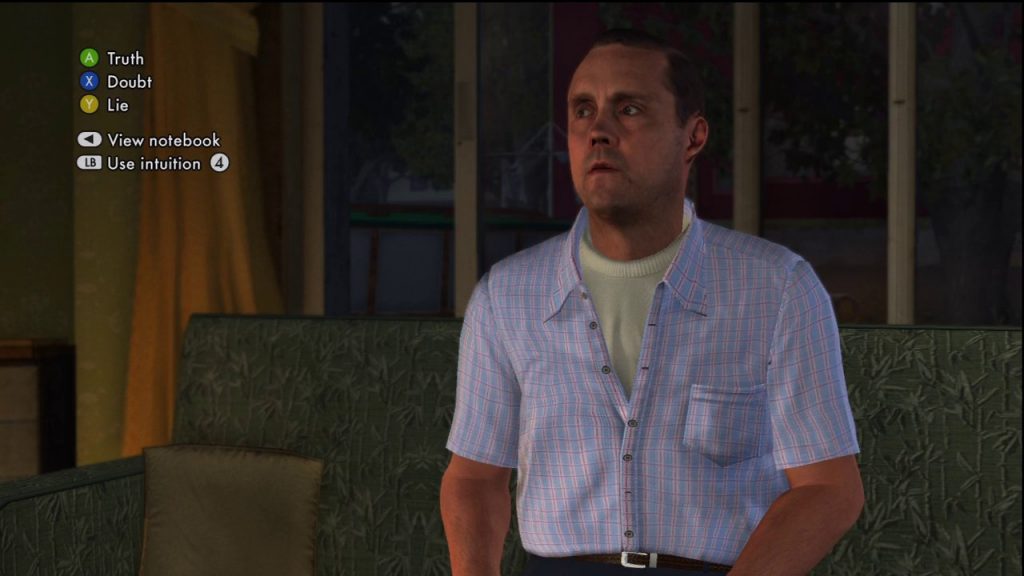 When I started the game, I had intended to avoid use of “intuition” (in-game hints), simply as a matter of pride. I ended up using most of it each case.

One of the highlights has to be your partners. Each of the four men who had the misfortune to be paired with us seemed to have no end of witty put-downs for Phelps’ driving and crazy suspect theories.

Rusty had the best lines, in my opinion, but my personal favourite was Roy Earle, our partner in Vice. What can I say – there’s something very intriguing about a bad boy. 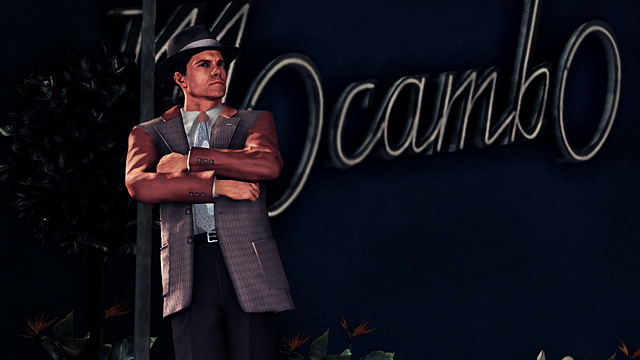 I’m a Girl Gamer, so let’s talk about sexism

I didn’t find the game particularly sexist for its setting (it’s the 40’s, so naturally all the major players are male, and all the women are receptionists or shop girls or beaten wives).

But there was one line that really got me mad. It was the constant use of a particular word by one of the men when speaking to women in the game: “princess”.

Fucking princess. If anyone ever called me that, in a non-ironic way, I think I’d punch them.

One of the things I wasn’t expecting was how fatal it was to be a criminal in Los Angeles. At least when Cole Phelps is around. Most of the side-quests ended in a call to the Police Department asking for the coroner to be notified. We even riffed on the typical Code Four radio call, meaning no further assistance necessary, to create the Cole Four, meaning everyone was DEAD.

In fact, as we later discovered, the city would definitely have been a much much safer place if Phelps had never existed… 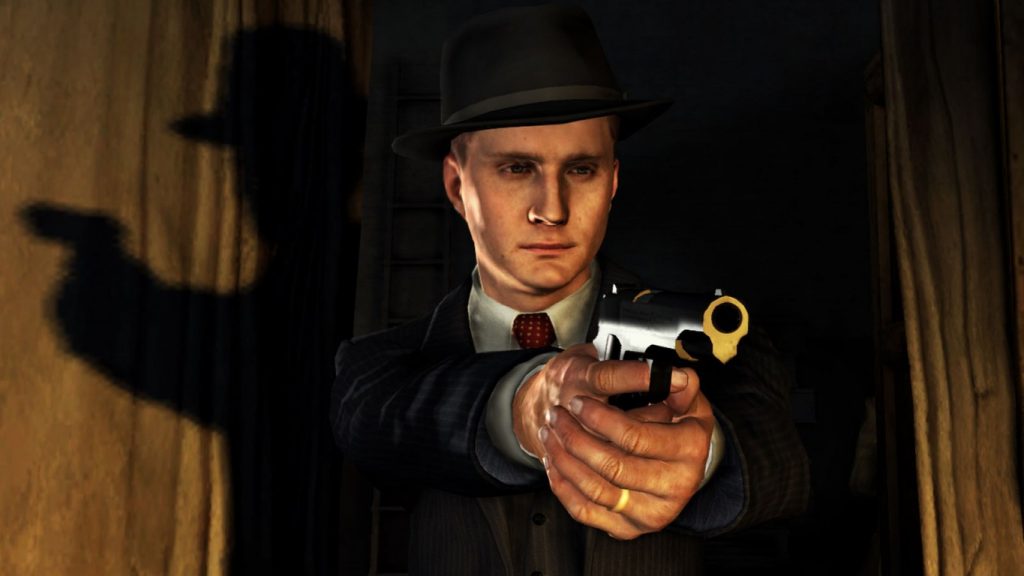 One aspect I didn’t enjoy was the newspaper articles. At first, it was interesting to get a glimpse into what other characters around the city were up to, but eventually they meant that I, the player, knew more about some aspects of the game than the character I was playing as.

And he knew things that I didn’t (who he was sleeping with, for example). It’s not a big thing, and the papers didn’t really spoiler anything major, and in some cases I probably wouldn’t have had the faintest idea what was going on, but they made the last couple of cases feel a little less engaging than earlier ones.

In fact, my opinion of the game wavered throughout. I loved the interrogations and putting clues together to come up with a person to charge. My favourite desk was definitely Homicide, and our “promotion” to Vice was a bit of a let down for me.

L.A. Noire was a fun game, and as the first game TC and I have played co-op, I think it was a good choice. The first half of the game was far more enjoyable than the second half, and the plot was downright confusing in places, but I may well have another play-through on my own some time (if I can figure out how the hell to drive) so I can work out what the hell really happened.

Have you played L.A. Noire? What did you think? Any recommendations on what game to try couple-gaming next?