I bought a new board game recently 😀 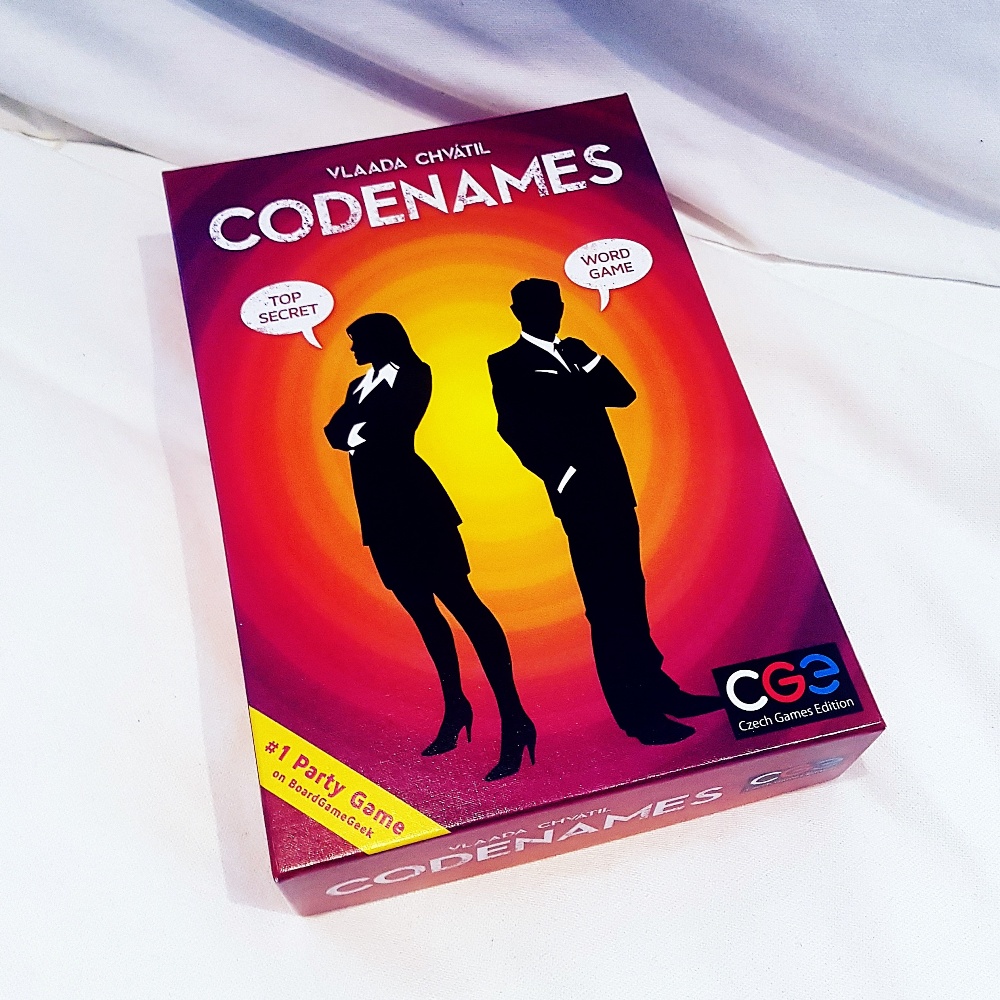 I first encountered the wonder that is Codenames at the International Tabletop Day in Manchester. I literally went on Amazon and bought it mid-game (#responsiblespending).

I’ve now had the opportunity to play it a handful of times, and it’s been pretty epic every time. 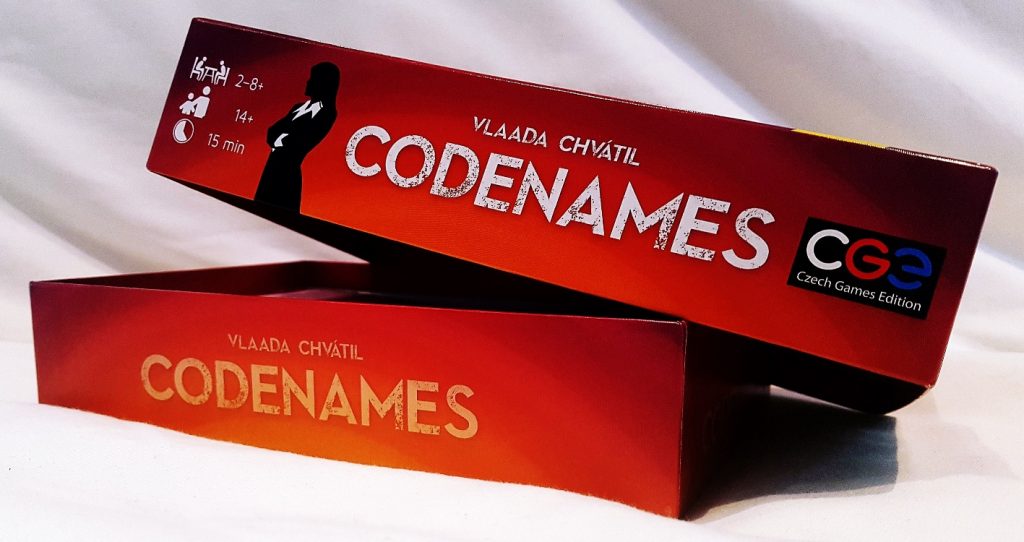 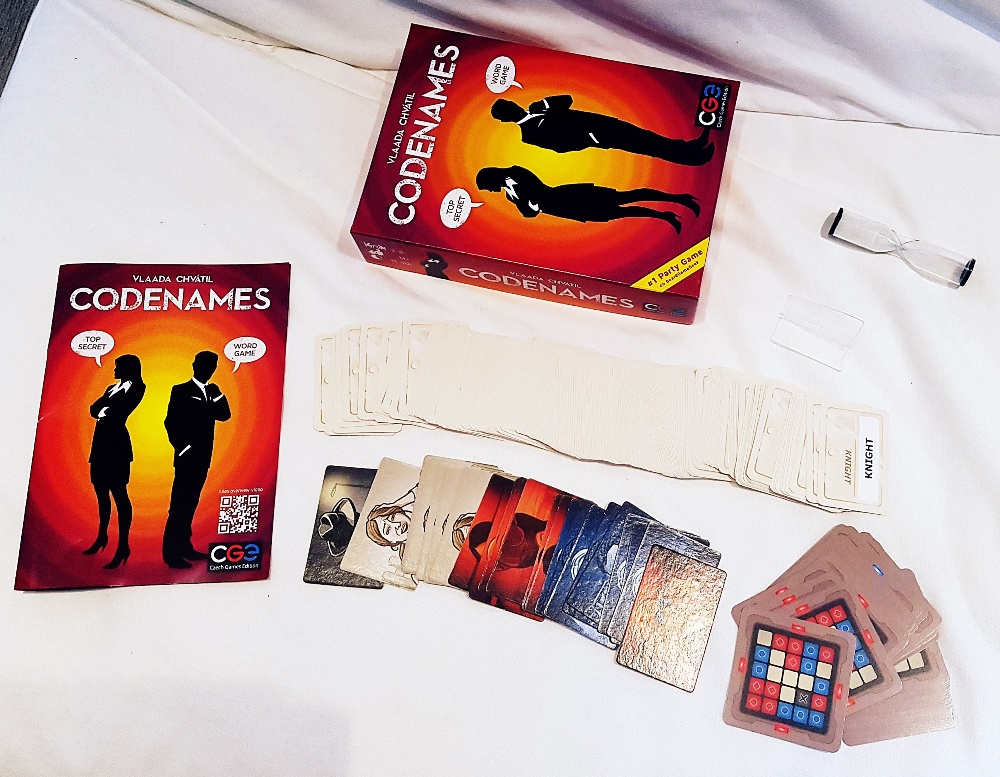 The setting is that you and another person (the Spymasters, ohhhh yeah) know the secret Codenames of all the secret agents in a group of 25 normal looking civilians. The agents are either assigned to Team Red or Team Blue: one Spymaster looks after each team, and players are split between the two teams. Each Spymaster has to describe the Codenames of their own spies to the players, so they can identify them successfully and not accidentally accost a spy from the opposing team, an innocent bystander, or the ASSASSIN! 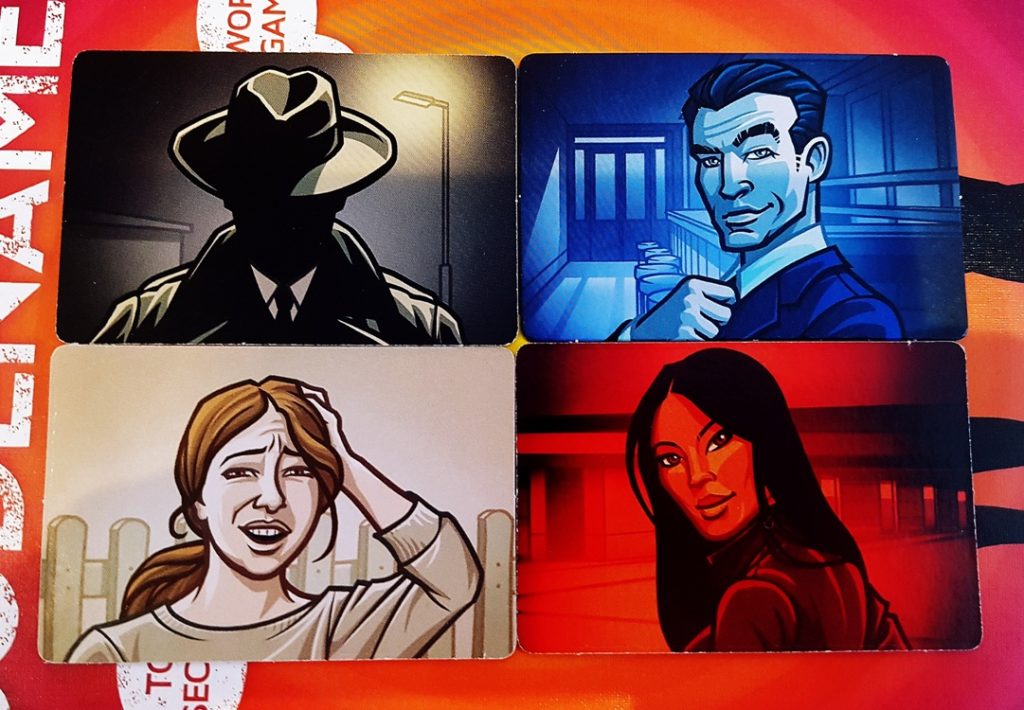 How this actually plays out is, you put down a grid of 25 cards, each with a word on (e.g. Boom, Moscow, Snowman). The Spymasters draw a key card which allocates which cards are secretly what type of person, and then take it in turns to describe the words on the cards assigned to their team. Here’s the catch – they can only use one word to do it each turn! 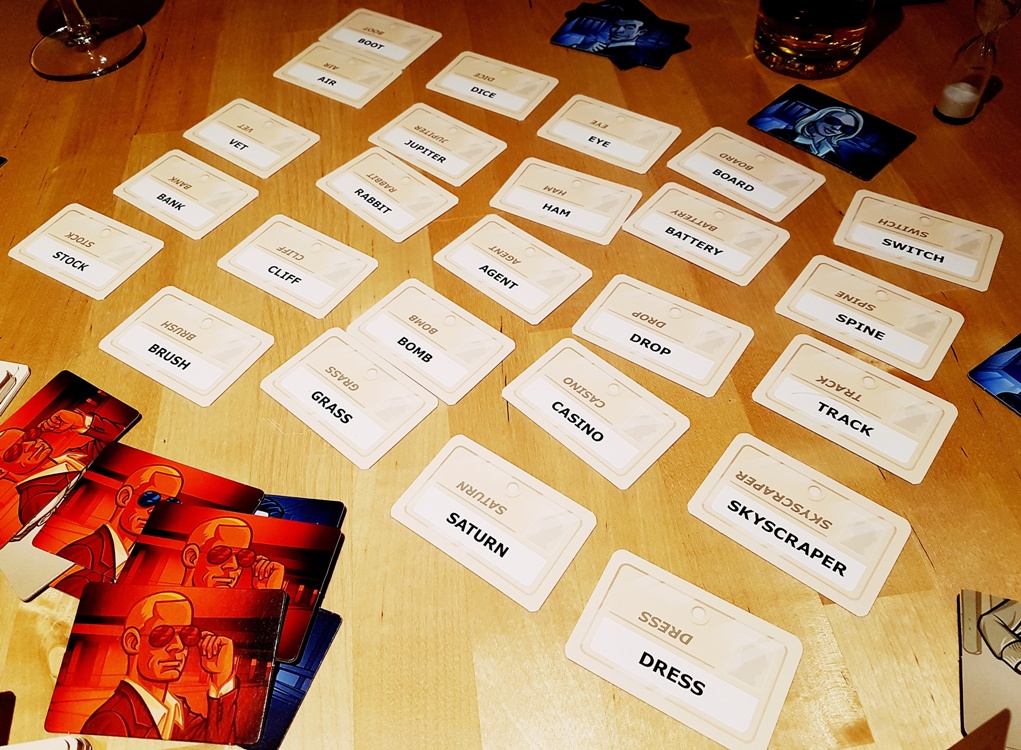 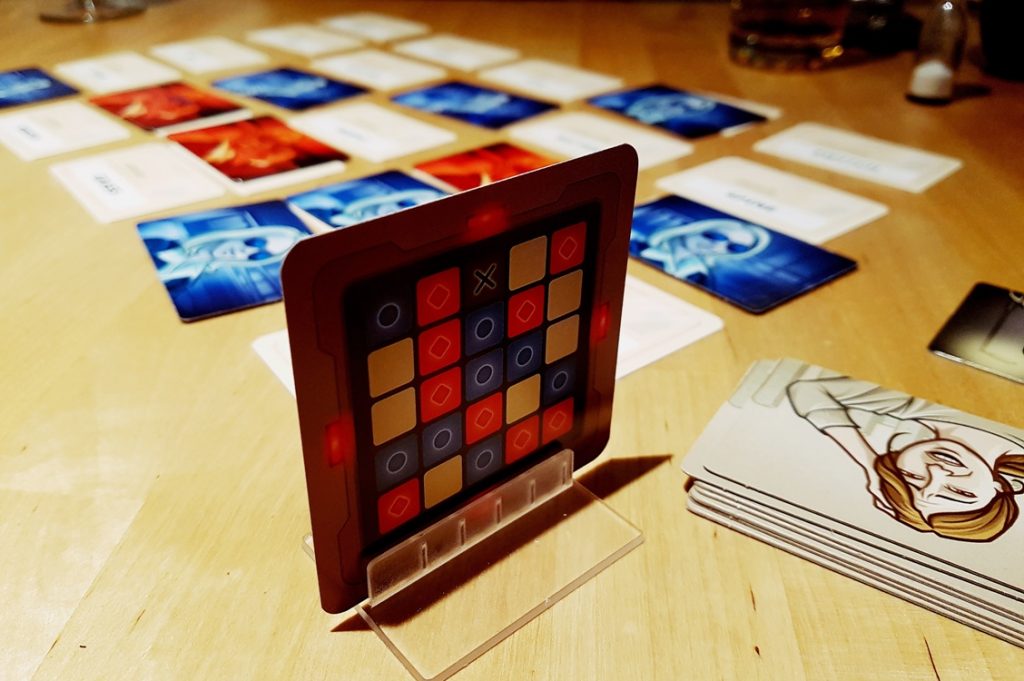 For example, if I had “Boom”, “Lab” and “Bomb”, I might say “explosion, three”. The word explosion is my hint, and three is the number of cards relating to it. If my team guess all three correctly, awesome. They even get an extra guess at the end in case they missed any in earlier rounds. If they get an innocent bystander, their turn ends immediately. If they get a Blue spy, their turn ends and the Blue team get to reveal that card. If they get the Assassin… that’s it, game over, we lose. Otherwise you keep going until one team has identified all their spies.

The rules are really quick and easy to pick up. I’ve played it with both serious gamers and super-casual gamers, and everyone has been a big fan so far.

On the other hand, this is a game with quite a lot of waiting around, especially at the start. When the key card is first drawn, generally you’ll wait around for several minutes while the first player tries to think of something for their first go. Following turns tend to be a little quicker, but the lack of a defined time limit does mean some turns can drag on. There is an hourglass which can be flipped if people are taking the piss, though I try to avoid that at all costs. 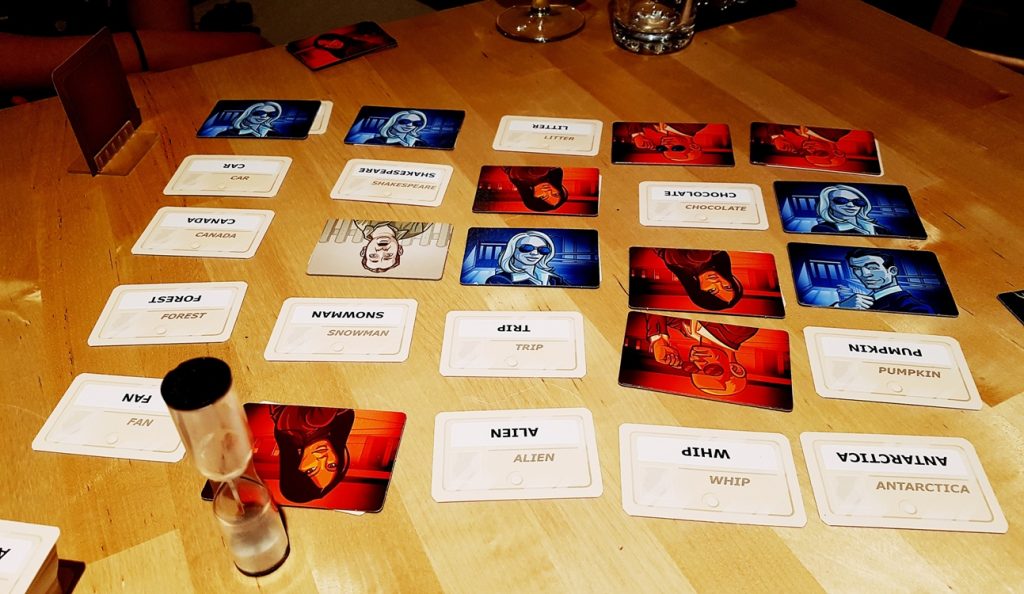 It is possible within the rules to play as a 2- or 3-player game – you are all on the same team, and the opposing colour gets one card revealed every turn, which the Spymaster gets to choose. To be honest I haven’t bothered playing a 2-player version, as getting at least one “two” in the game is generally very easy, so I don’t think it would be much of a challenge (and I love myself a challenge).

The game is pretty balanced – the team who goes first gets one more word to guess than the second team, and gets to use the incredibly sexy double-agent card. 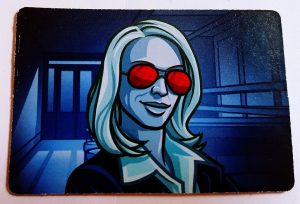 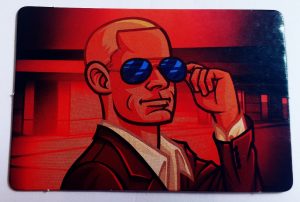 Even though that meant that you had to get a double guess in at least once to win, you also had a bigger pool of words, meaning it was often easier to find a first clue to tie multiple ones together. In my experience, there wasn’t much difference between which team won more frequently.

As to the word-based rules, the rulebook mentions some optional rules regarding compound words, acronyms, etc, and the general rule of thumb is that if your opposing Spymaster approves it, it’s allowed. It’s a game where “house rules” will definitely become a thing the more you play it.

I had three spies left out there, my opponents had but one. I had to get all three with this next move, or we’d be out of luck (describing a single card is easy peasy). My words were Pants, Vacuum and Ivory. What word did I go for? “Clean”. See, one of the important things to do is to look at the other words out there, and “Clean” definitely didn’t apply to any of them!

During one of the rounds, I had multiple dilemmas. Both Jupiter and Saturn were on the board, and only one was mine. And my fantastic “Game, four” clue that would hopefully have got Board, Casino, Rabbit and hopefully Track was stumped when I saw Dice was the Assassin card. 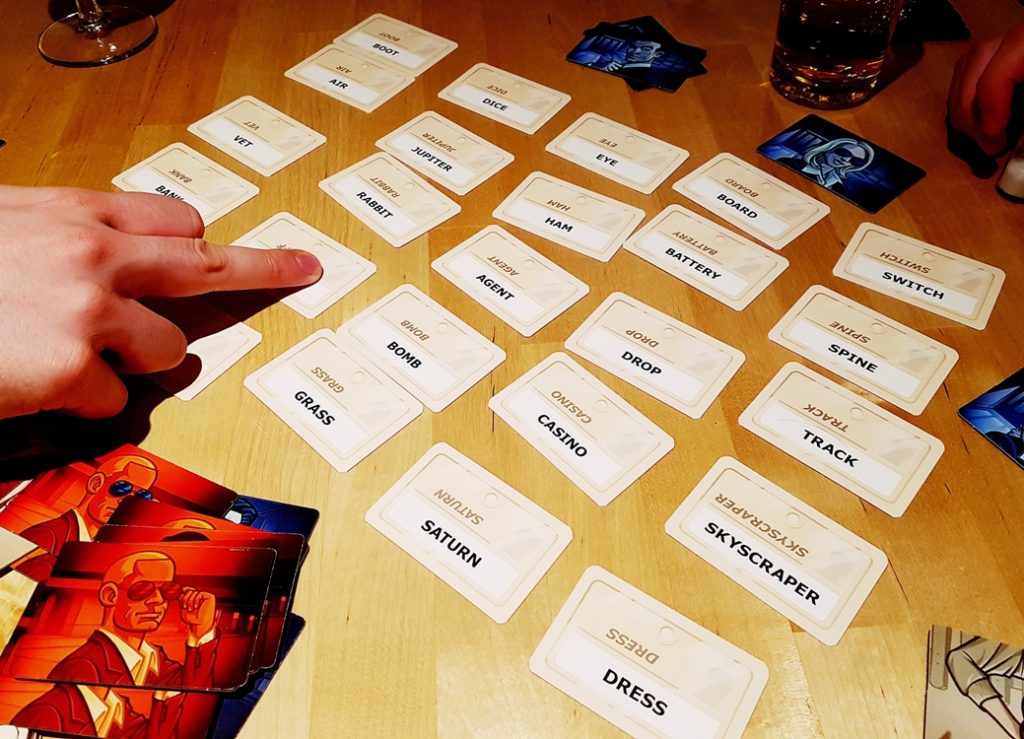 Towards the end of another game, I had one word left – Scorpion. Now, I said describing a single card is easy, but for some reason I couldn’t think of a damn word to describe scorpions. I avoided sting, because octopus was out and for some reason I thought an octopus was a jellyfish… The word I ended up going for was “arachnid”. Scorpions aren’t even arachnids! He got it anyway, no thanks to me, and we won 🙂

If you want to come over and play Codenames, I would be SO up for that. If you live too far or I don’t actually know you, go pick up a copy yourself, and relay your totes hilar stories in the comments.

1866 And All That: Megagame Report

For the second weekend in a row, I traveled down to the south to take part in a Megagame: 1866...