Top Posts
How to Moulin Rouge, Secret Cinema Style
7 Habits of Highly Effective Megagamers
Our Finest Hour: Leeds Escape Room by Escape...
Urban Nightmare: State of Chaos – the First...
How to Write a Megagame Part 1: Choosing...
Game of Alchemy, and Megagames vs LARPs
Goodbye Everybody Dies…
How to Write a Megagame Part 3: Scoping
Undeniable Victory: Megagame Report
Ladies Who Megagame
Home Archive Girls Night Out at the Cocktail Experience

Girls nights out are the best. You get dressed up, drink wine, talk about boys. You don’t need to go anywhere that serves craft beer or where jeans are the most acceptable dress code (yes, I’m stereotyping here). And that’s exactly why the Cocktail Experience last Friday was amaaaazing.

The Cocktail Experience shows off how awesome the Leeds bar scene is. Eighteen bars created a unique signature cocktail based on a different spirit. Attendees bought tokens they could trade at the bar stands for a drink. For cocktail lovers, it’s a dream come true.

I went to the first outing of the Cocktail experience last year with TC, but we had an early commitment the next day, so couldn’t enjoy it properly.

This time round, TC was off skiing in Austria, so I asked my bestie Ellie to come with.

We started off the night in true girly style – getting changed, putting on makeup and drinking wine.

And taking selfies. Lots of selfies. 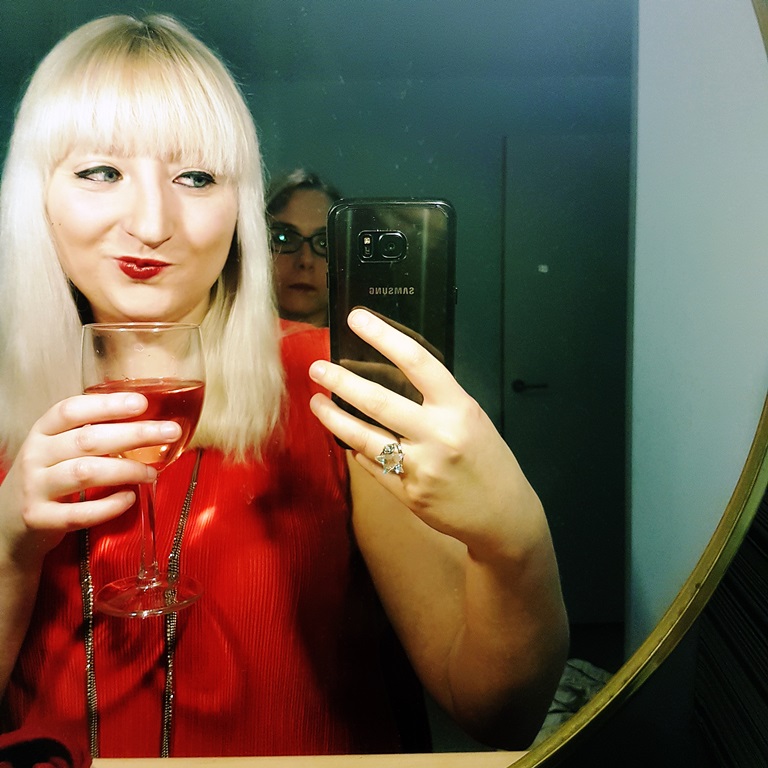 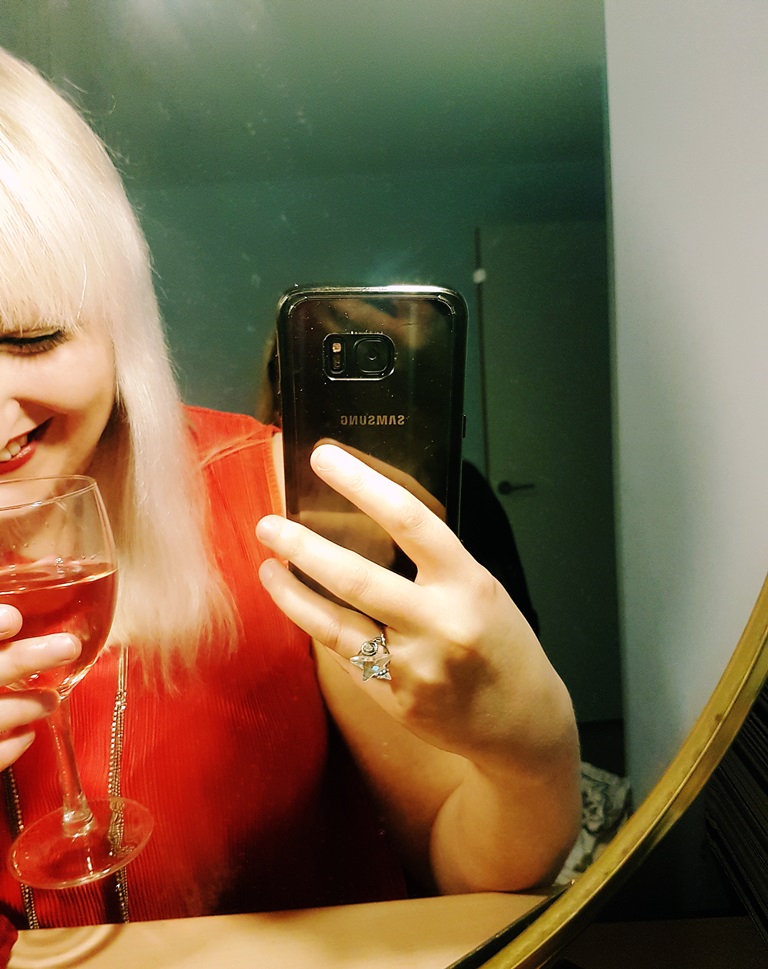 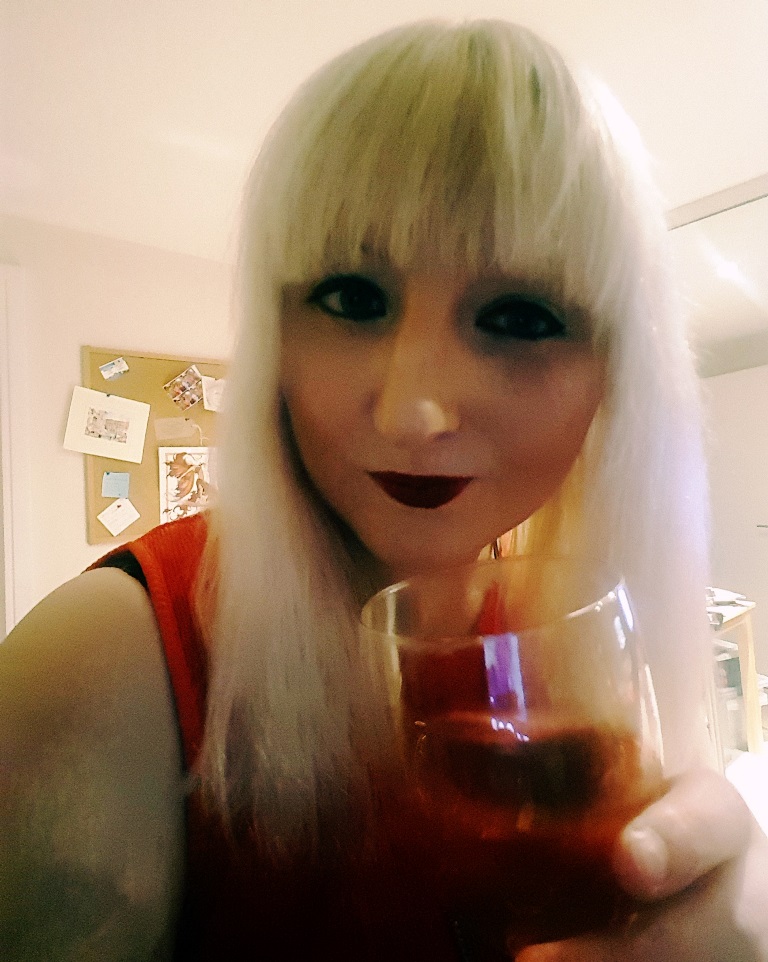 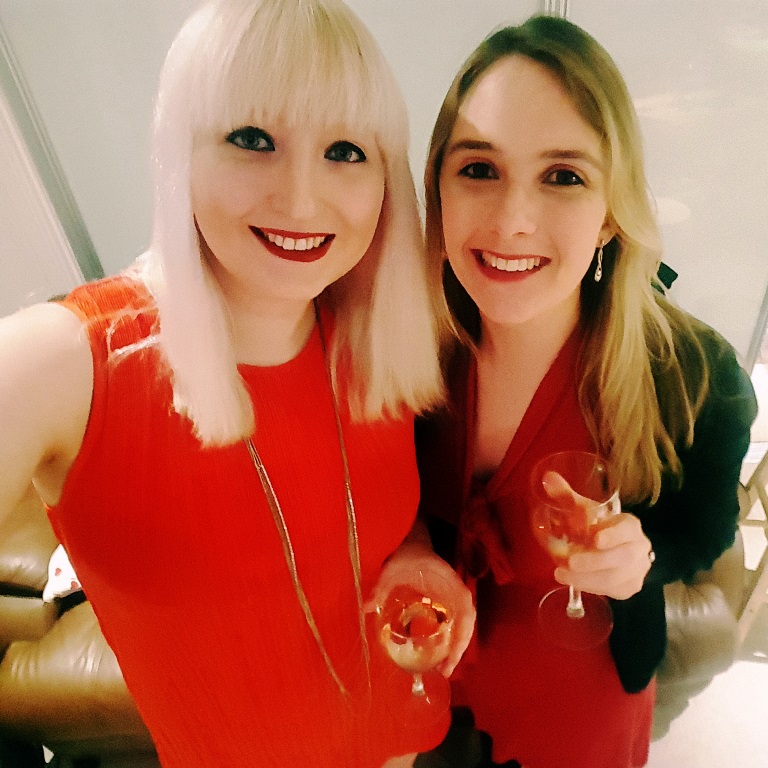 I’d gone panic shopping earlier in the day and picked up this gorgeous red dress from Next. It’s technically a long top, but with a black slip underneath, no one seemed to notice!

Dressed up and wined up, we called an Uber to avoid the drizzle, and headed over at about 8pm.

Arriving at the Cocktail Experience

The Cocktail Experience took place at Aspire, close to the train station. I’d only been there once before (for the first Cocktail Experience), and was super impressed by it. It’s a historic building, but unlike a lot of older venues it isn’t at all dated on the inside. The Banking Hall is spectacular (who doesn’t love a good column). The event also makes use of the mezzanine level which looks out over the main hall.

On the night, the venue was all dressed up, with some awesome hashtag lights. I definitely need some of these for my bedroom. 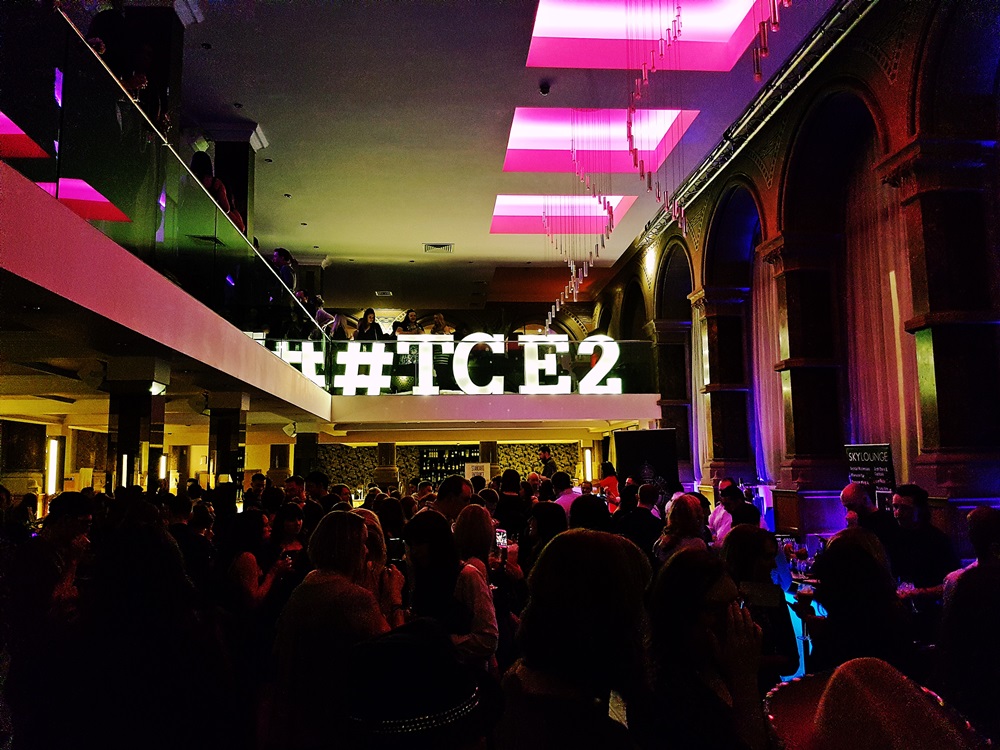 After a little bit of confusion whereby we entered through the cloakroom by mistake… we were there!

Upon arrival, we received a map showing where each bar was in the hall. We were also given two drinks tokens each. Standard tickets typically came with a single token, but I’d managed to nab a discount code to get an extra one.

With that, we were off in search of our first drink.

Cocktail One – The Alchemist

There was one cocktail we were not going to miss that night. The Alchemist has to be the coolest bar in Leeds. It takes molecular mixology to a whole new level, as you can see in my blog post from when I visited them last year.

We decided to head straight to their stand to grab our first drink of the evening, before having a wander around the other stands. 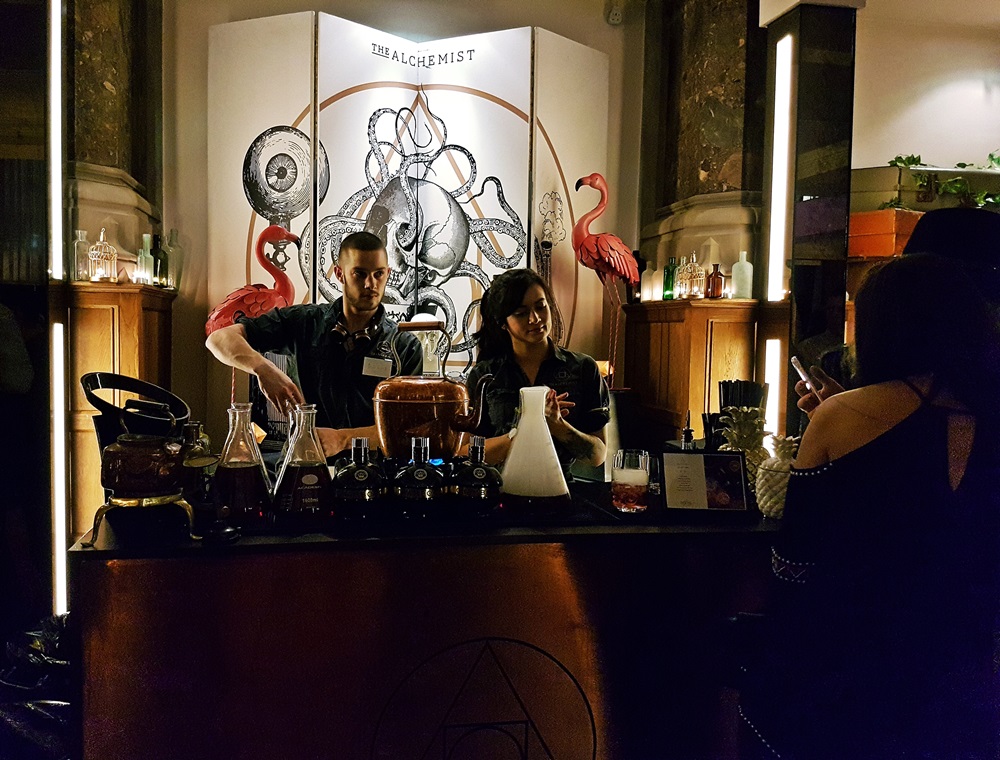 Overall, it was honestly a little citrus-y for my palate. I love a sweet cocktail and this wasn’t really it. But I was still happy – it had come with dry ice! 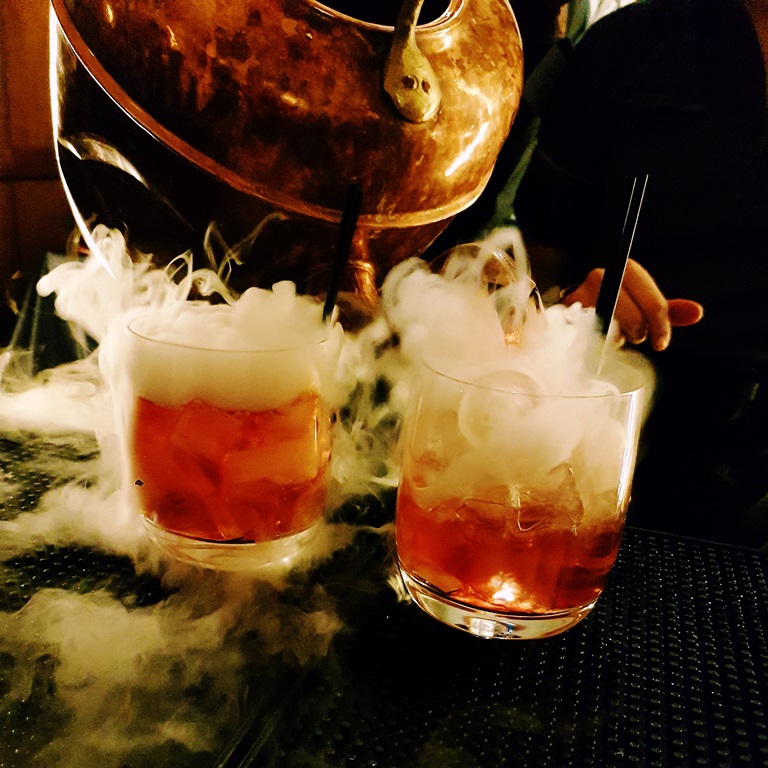 Is there any time when dry ice isn’t awesome?

Cocktails at the ready, it was time for some explorin’.

Checking out the bars

We wound our way around the 8 bars on the ground floor first. Each bar had its own stand, decorated in the distinctive style of the bar. On each one was a little sign with the details of the cocktail on offer. 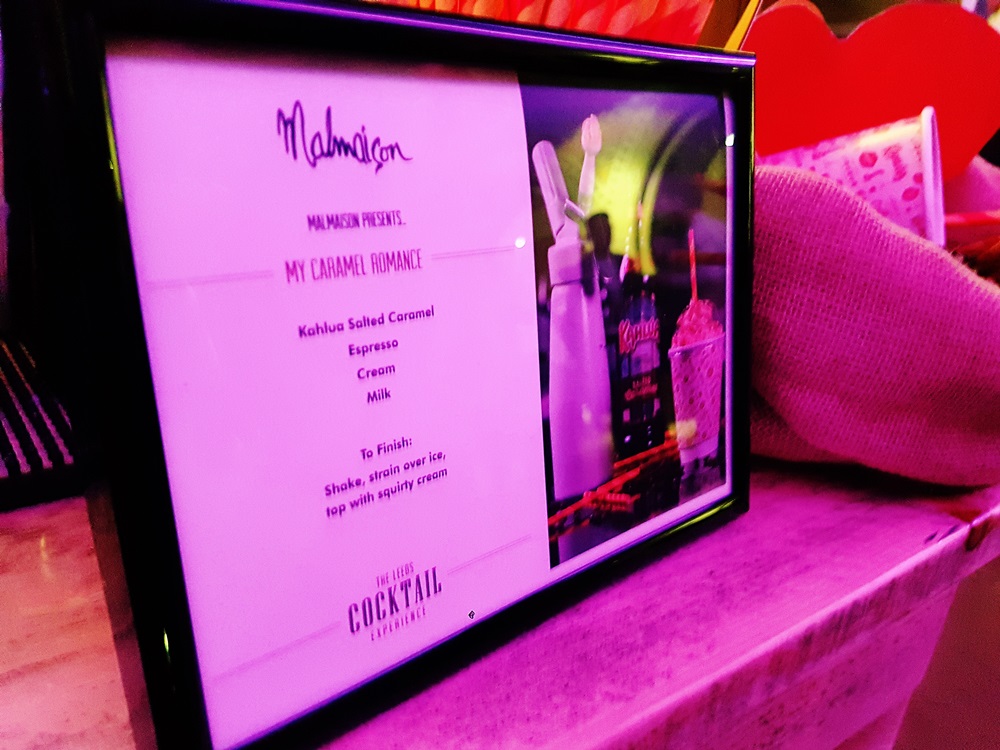 Downstairs was also home to the entertainment for the evening. The music hit that perfect balance, getting you in the party mood but not deterring conversation.

Oh, and there was a saxophonist, natch. 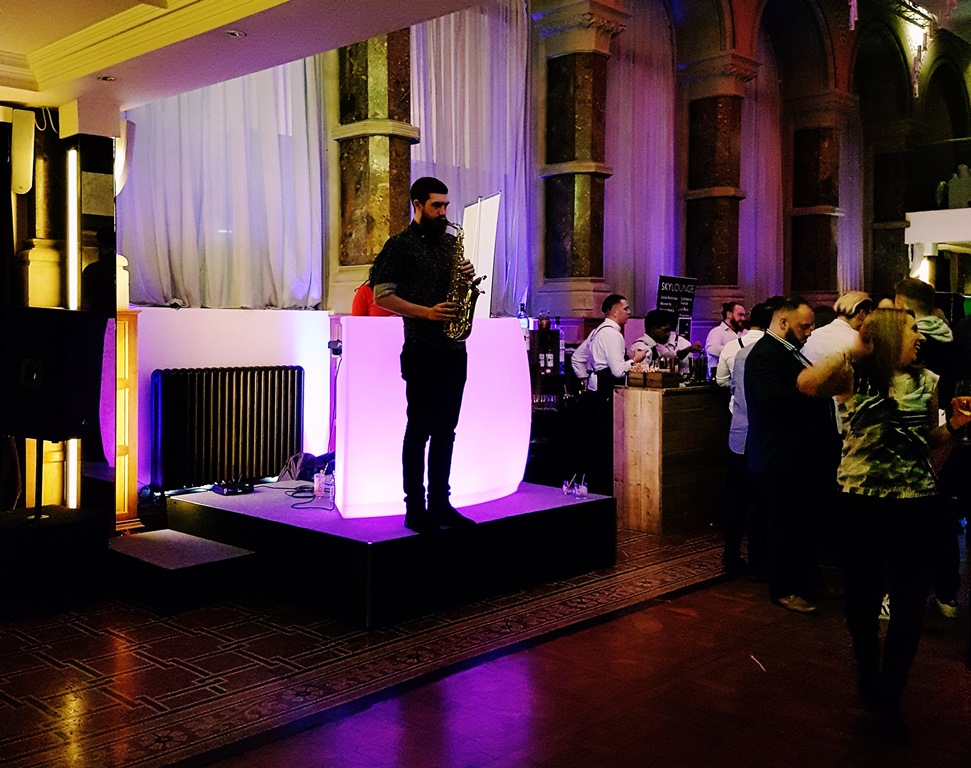 But the place we spend most of the evening was upstairs on the mezzanine level. It was fantastic, thanks to a combination of some outstanding bars, friendly bartenders and the great view over the hall.

Exploring upstairs, we came across a backdrop that was just crying out for some photos… 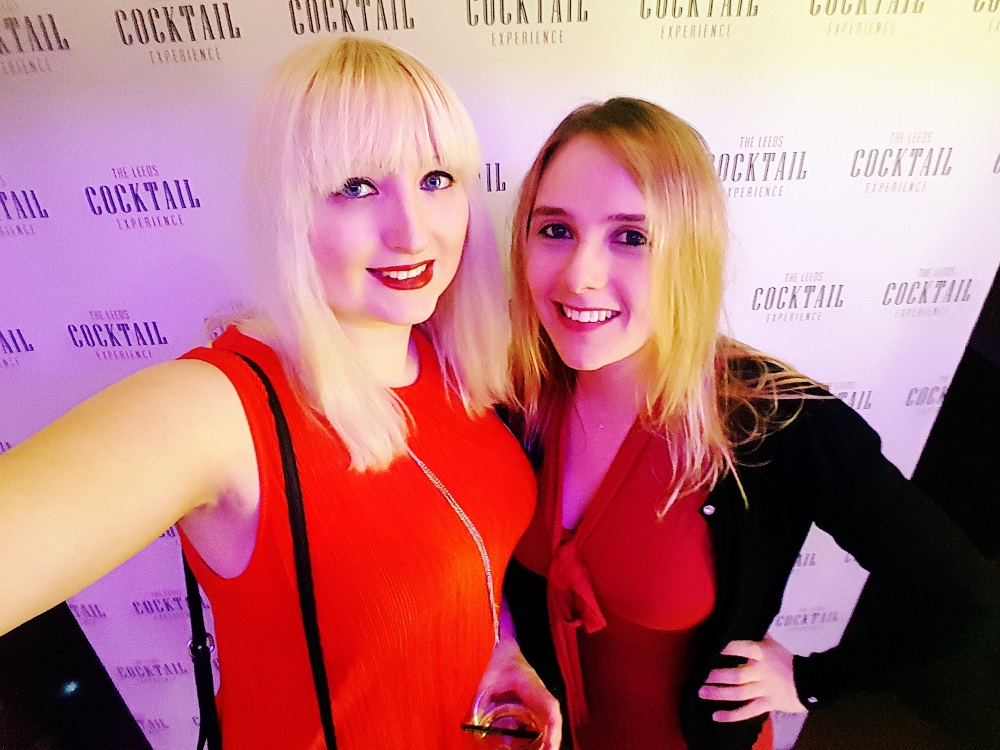 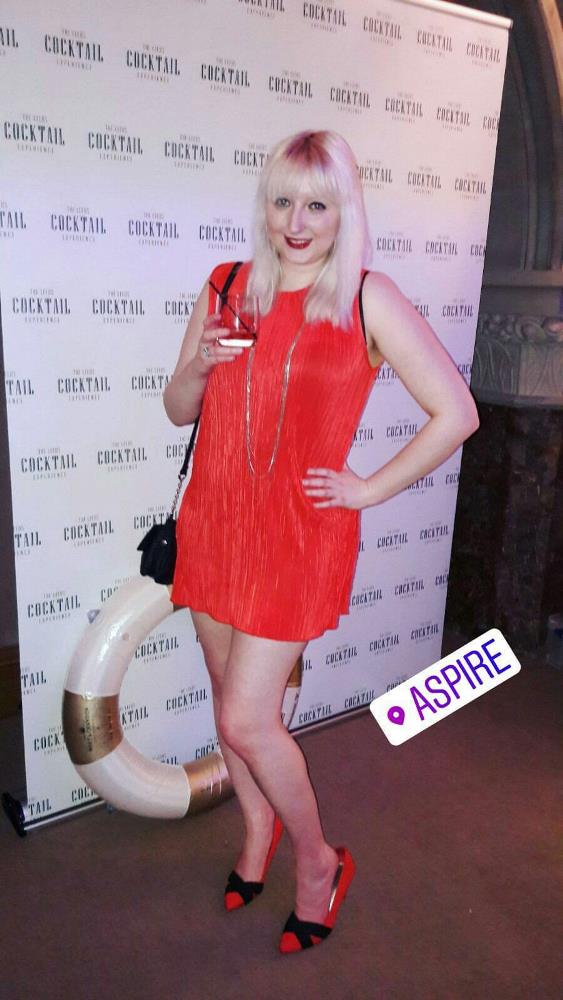 I think that second photo may be one of my favourite photos of me ever (and see, it totally works as a dress!).

Unlike our first round, we decided to get different drinks to each other for the rest of the night. An excuse to try even more of the incred cocktails on offer. 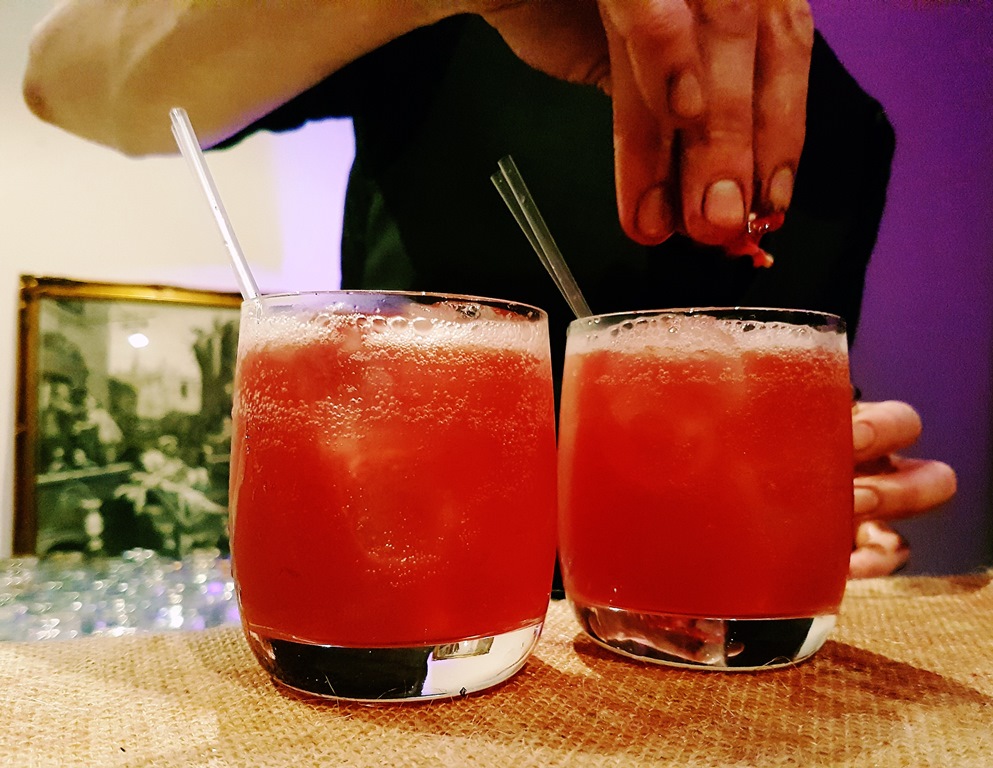 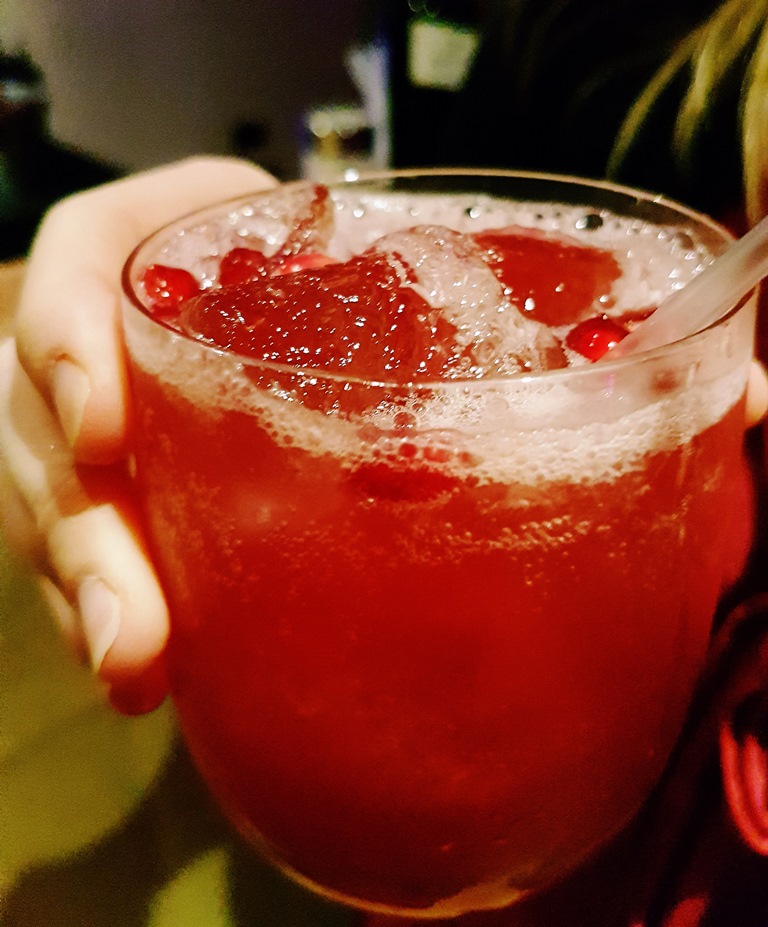 Now I’m not sure what happened to the sherbet rim, but the pomegranate was fruity and delicious!

That was Ellie’s choice though, and for mine, I had something sweeter in mind.

Right at the end of the mezzanine, our way was blocked by a Helter Skelter! Its purpose? Well, it was too small to ride down, but it did draw attention to the neighbouring Oracle, whose cocktail, Fairground, was my second drink of the night.

Fairground was Grey Goose vodka, lemon juice, lime juice, Sprite and… house made bubblegum infused syrup! It was served in a teeny milk bottle and topped with candyfloss! 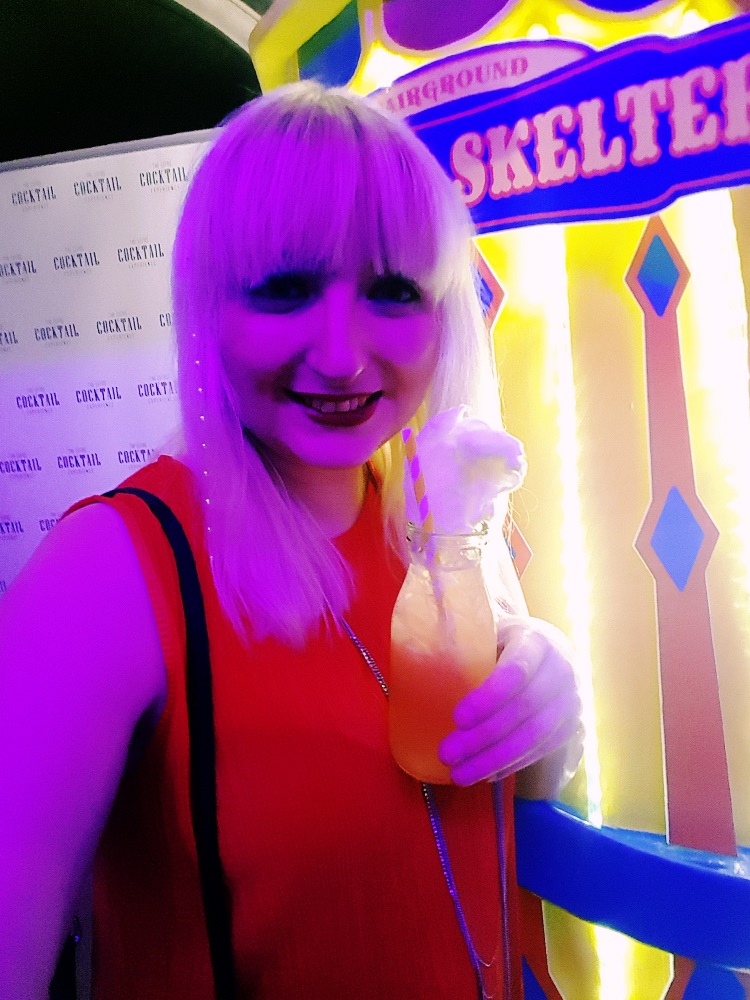 Yes, it was super sickly – too sickly for Ellie, but it hit my sweet tooth perfectly!

These cocktails went down a treat, and in no time at all it was time for…

Downstairs, we bought some more tokens. Tokens were two for £10 – not a bad price for such high-quality cocktails!

Then Ellie chose her third drink. The stunning Sky Lounge normally sits atop the DoubleTree Hilton with fantastic views across Leeds. Tonight, however, it sat on the ground floor of the Cocktail Experience, and was serving up Pink Lady.

Then a grapefruit and basil foam was piped on top.

Ellie was pleased with her delicious cocktail but then, while posing for my photos, disaster struck… 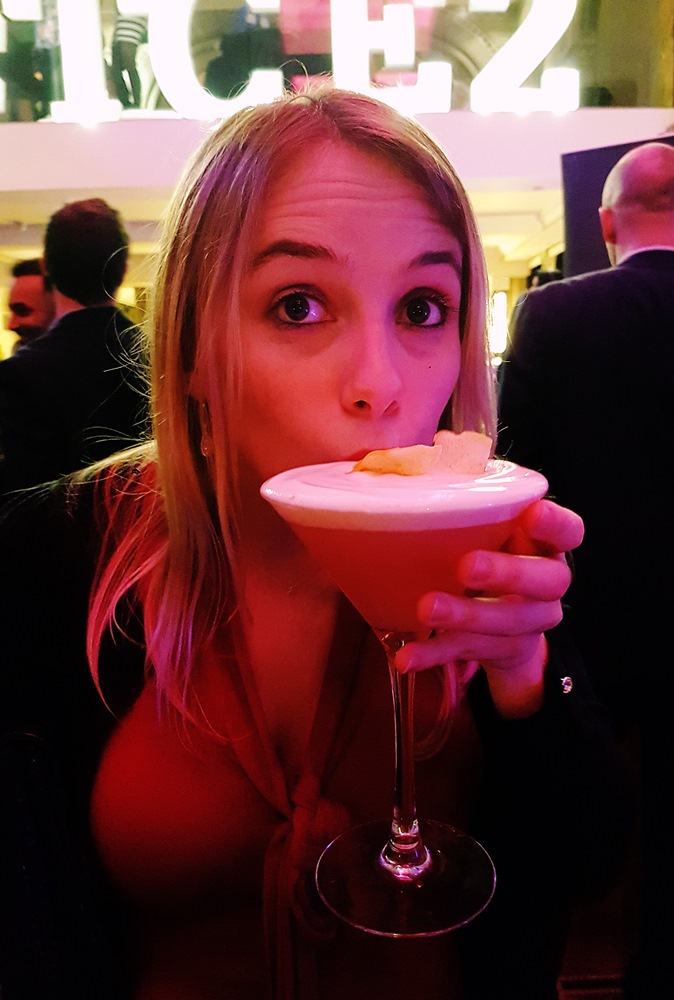 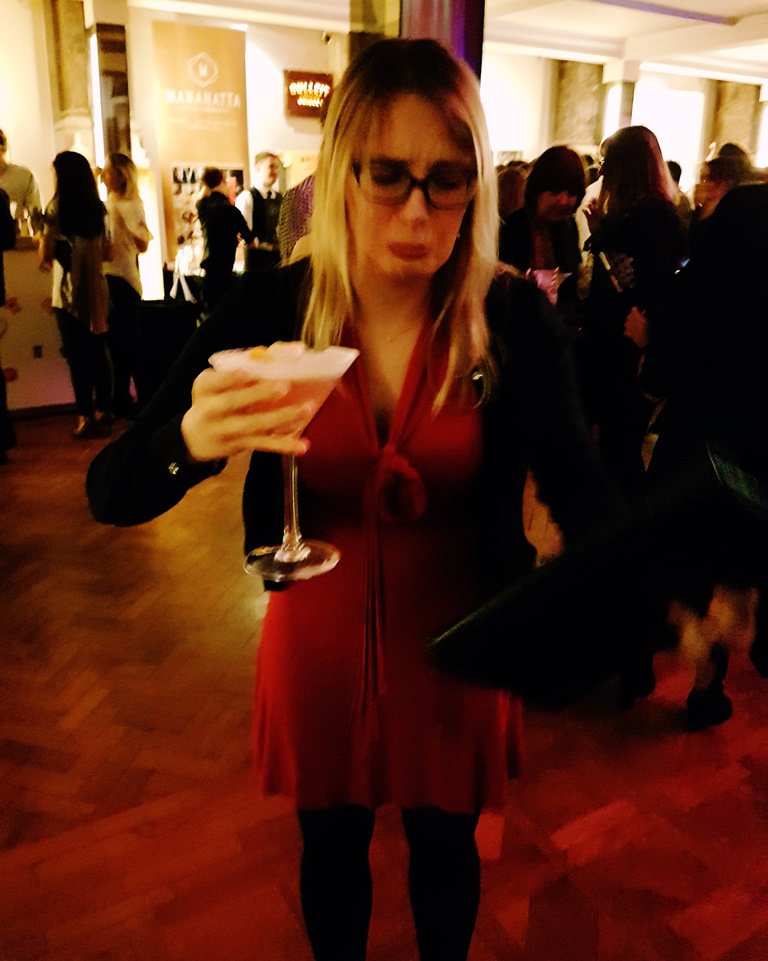 Luckily the spillage wasn’t too dreadful. While moving away from the bar to sort out the mess, we spotted another exciting attraction which quickly took our minds off both the spill, and my third drink…

I don’t know why any event EVER exists without a photo booth. It’s such an awesome laugh, especially when you have a few drinks inside you and want to remember what an amazing time you’re having.

We tried on the various options of wigs, hats and accessories and decided on: 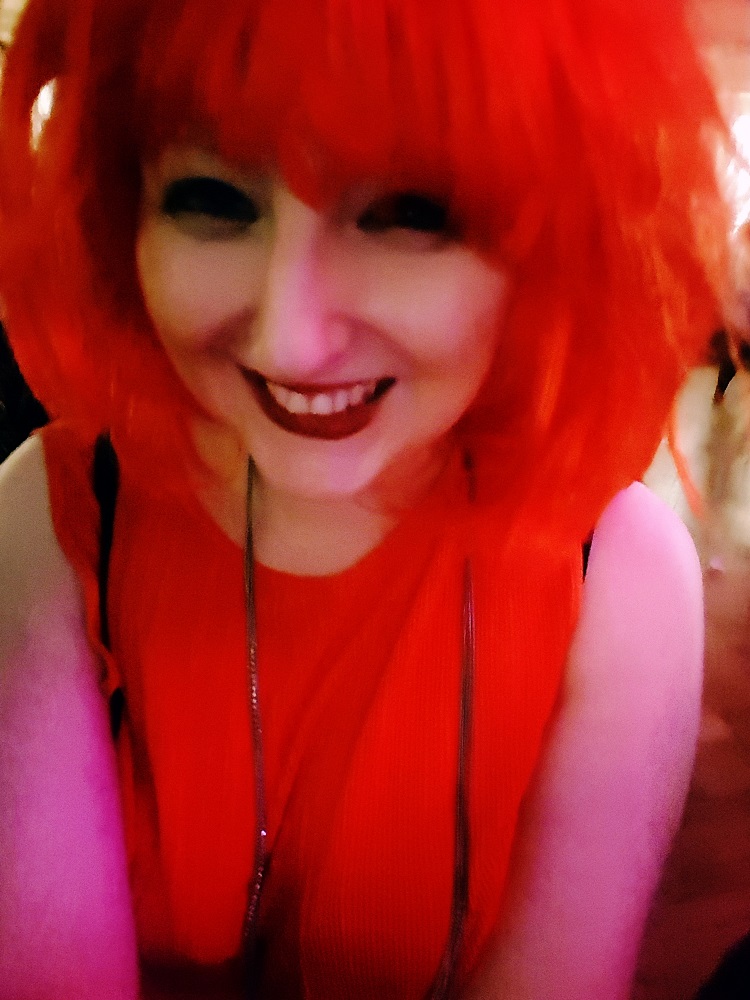 How MUCH does that wig match my dress??? 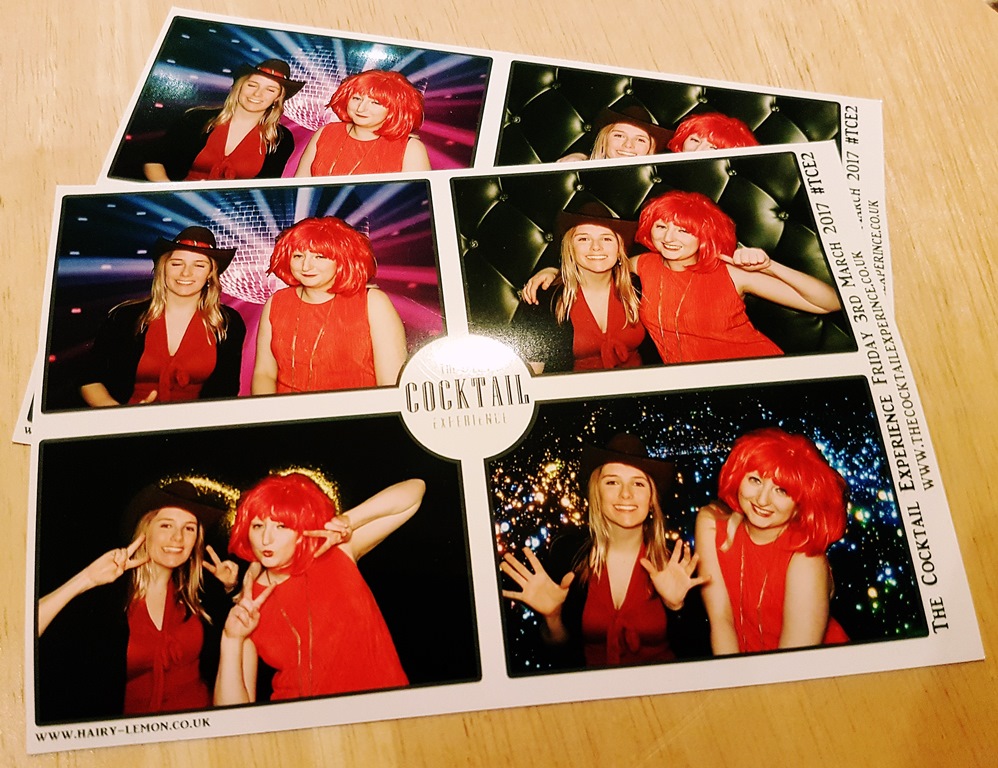 Heading back upstairs, we sweet-talked the guys at the Malmaison booth to let us grab some sweets while they made my third drink of the evening. My Caramel Romance combined their chosen spirit, Kahlua, with espesso, cream and milk. It was served in a milkshake cup and topped with squirty cream and caramel sauce. 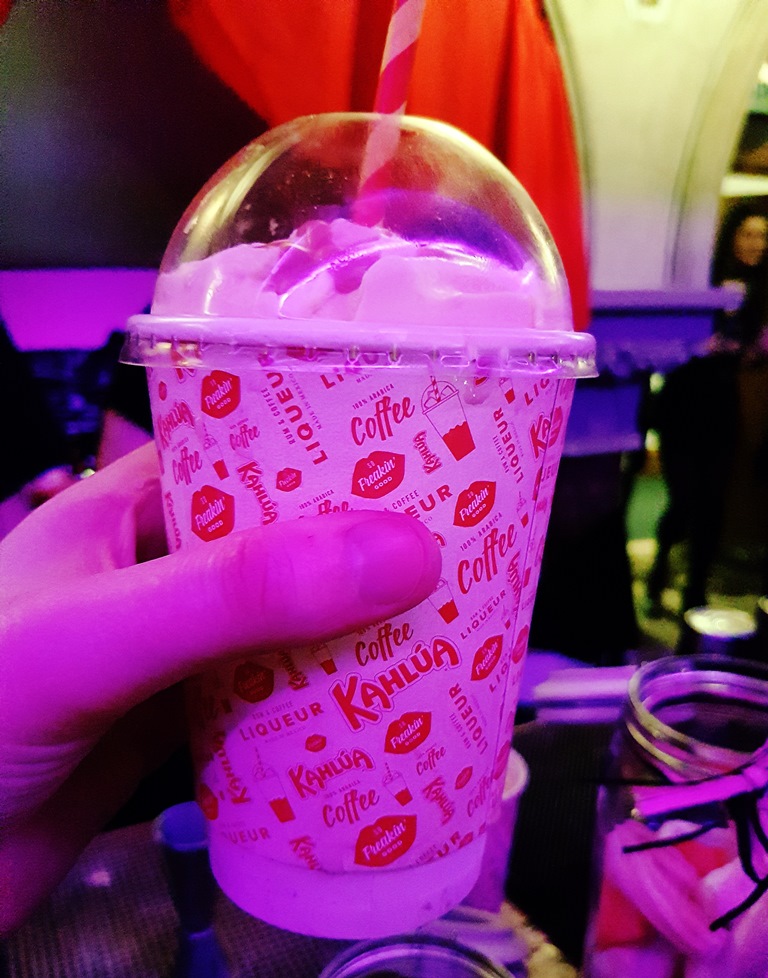 Once again, my sweet tooth called the shots. It tasted of a caramel iced coffee. Though from the increasing level of tipsy I was getting, it was clear that the Kahlua was doing its job.

We meandered around the mezzanine having a chat with various bartenders. We decided against Mr Nobody’s Talisker-based Land, Sea, Skye, because we’re not whisky fans,. But the friendly people manning their stand let us sneak a chocolate anyway. We stuck around to chat to them about Mr Nobody. I’d been there before with my other bestie Keeleigh for drinks, but never eaten there. Our conversation definitely encouraged me to move it higher on my list!

In fact, a lot of the stands had whisky based cocktails. Feeling open-minded, when one stand (I forget which) offered to give me a taste of their whisky, I accepted. Yep, I’m really really not a whisky fan – perhaps it was a particularly smokey one, but it tasted like I’d just eaten a cigarette.

It took a while to decide what our last drink of the night would be. We took several laps of the bars, tasting various samples and chatting to all the bar staff, before making our choice.

I hadn’t even heard of 53°North before. It turns out it was literally downstairs – in fact, it was where the afterparty was taking place. We were both tempted by Marigold, which the bartenders described as “gin and tonic meets white sangria”. Jinzu gin was mixed with Vinho Verde wine, pink grapefruit juice, pineapple syrup, apple and quince bitters, and fevertree aromatic tonic water.

Then the bartender told us that Jinzu is Scottish-made, but Japanese-inspired, with cherry blossom and sake. Since Ellie grew up in Japan, I couldn’t really beat her on that front. 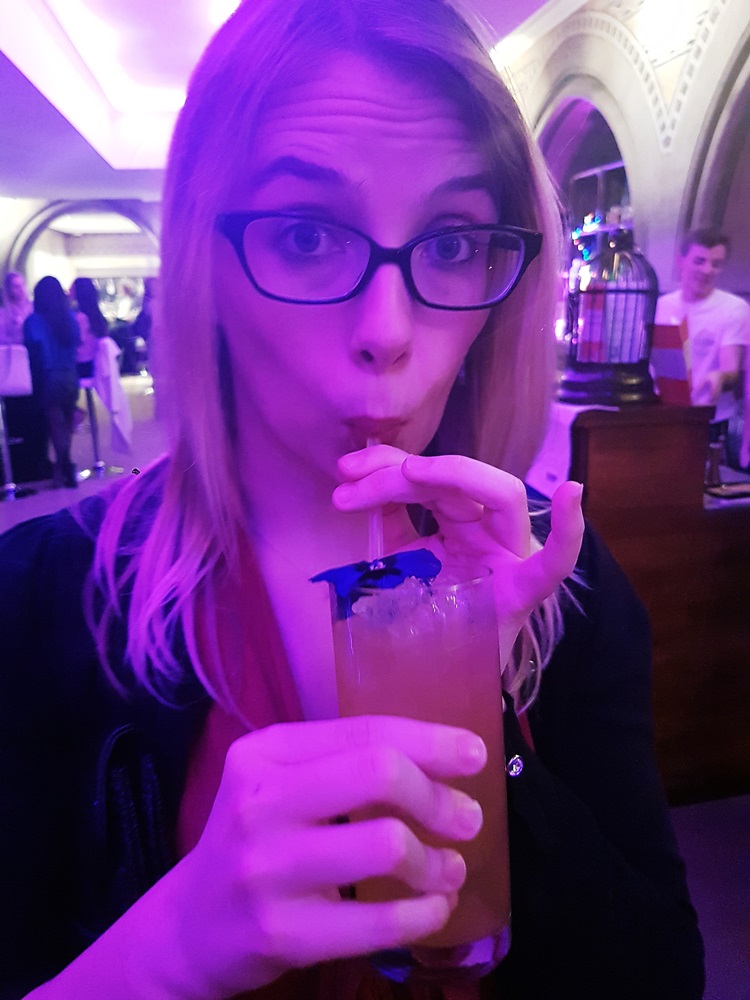 So then I finally decided on my last drink of the evening. We hadn’t heard of Chida either, but their drink sounded lovely. Chida Fizz contained Don Julio Blanco tequila, Cocchi Rosa aperitif wine, lemon cucumber and hibiscus cordial and soda. 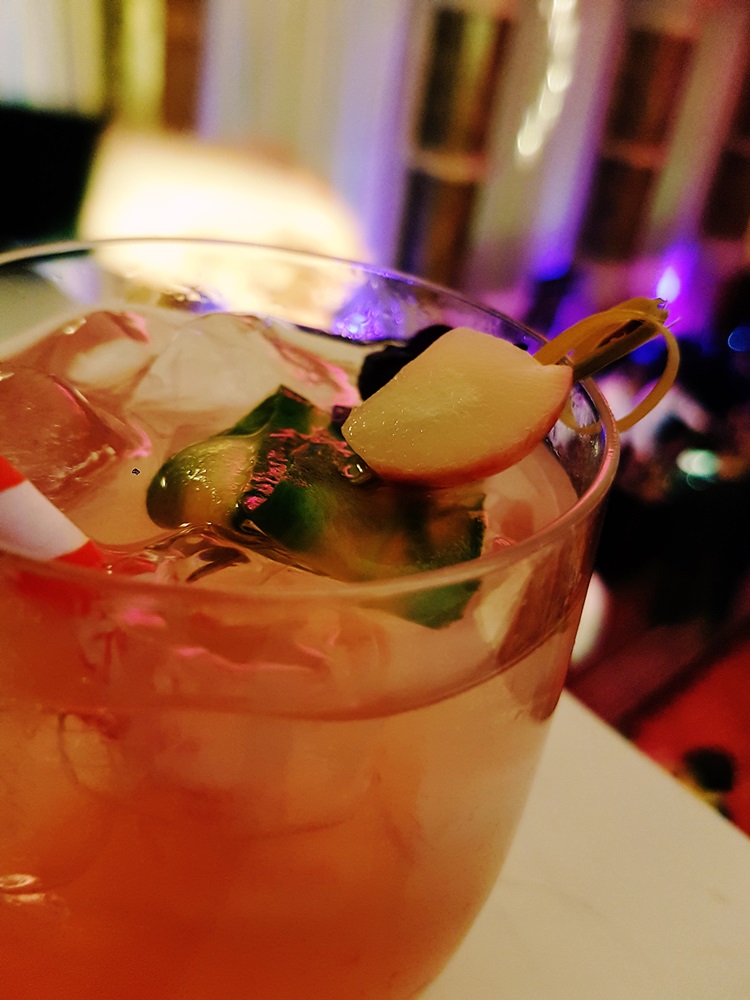 It was very refreshing, but actually my least favourite drink of the evening. Personally I found the taste of cucumber a little too strong, and, as we’ve established, I’m more of a sweet-tooth drinker than a savoury one.

We finished off the night gazing out over the hall, and I even managed to nab a photo with the hashtag symbol. 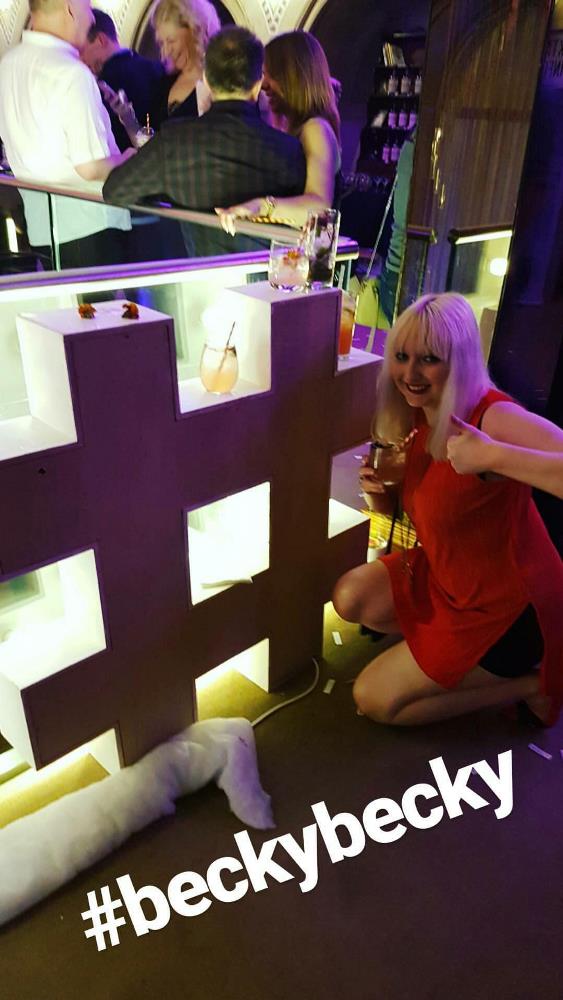 The evening was a lot of fun, but having finished our last drinks we decided to head home before the afterparty. On our way out we were given a Meat Liquor mug, so we headed back to mine for a sobering cup of tea and a bit more gossip before calling it a night.

We spent a lot of time talking to the bartenders throughout the night. Despite the huge variety of drinks available, there was one common theme throughout all the bars. Every single bartender was crazy knowledgeable about their cocktail and ingredients. And they all were super friendly and happy to share that knowledge. I feel like I learned so much about spirits and the Leeds cocktail scene. That’s what made it a Cocktail Experience, not just a Cocktail Night. Our evening was truly incred, and I’m already looking forward to the next one!

The Cocktail Experienceis run by Hairy Lemon and Pink Gorilla. They currently have no future Cocktail events announced, but I’m sure you can keep up to date on their website or Facebook Page.

I'd been dying to try out Aperitalia at Veeno in Leeds for weeks. I came across it while browsing randomly...