I’ve always adored the idea of being a market girl. 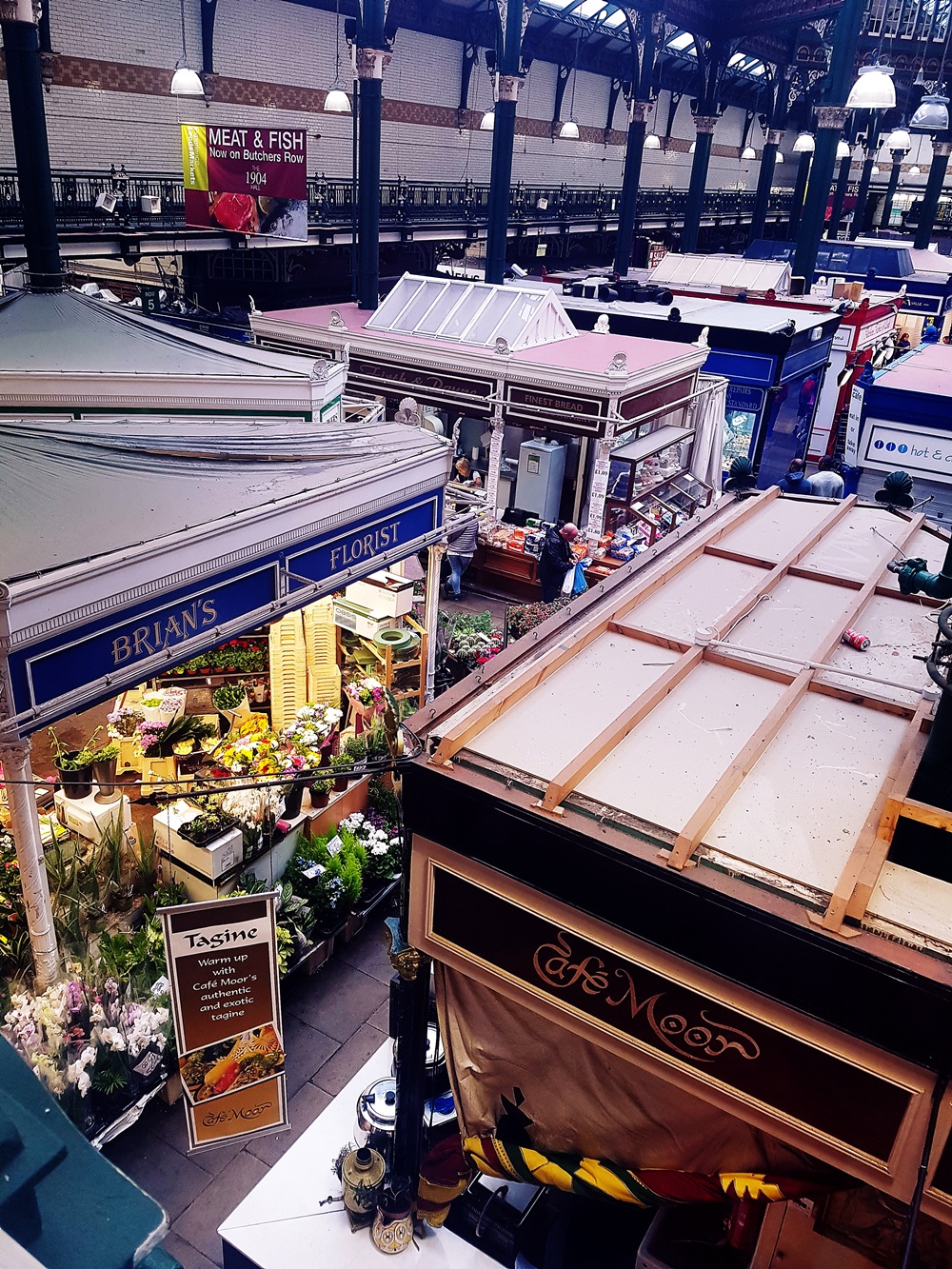 The whole “buy local straight from the farmer” ethos may seem to be at complete odds with my OTT digital existence, but I’m a firm believer that there’s no finer quality of food than farm fresh. I may be happy with online shopping for my books and tech stuff, but I’m a sucker for fresh produce. 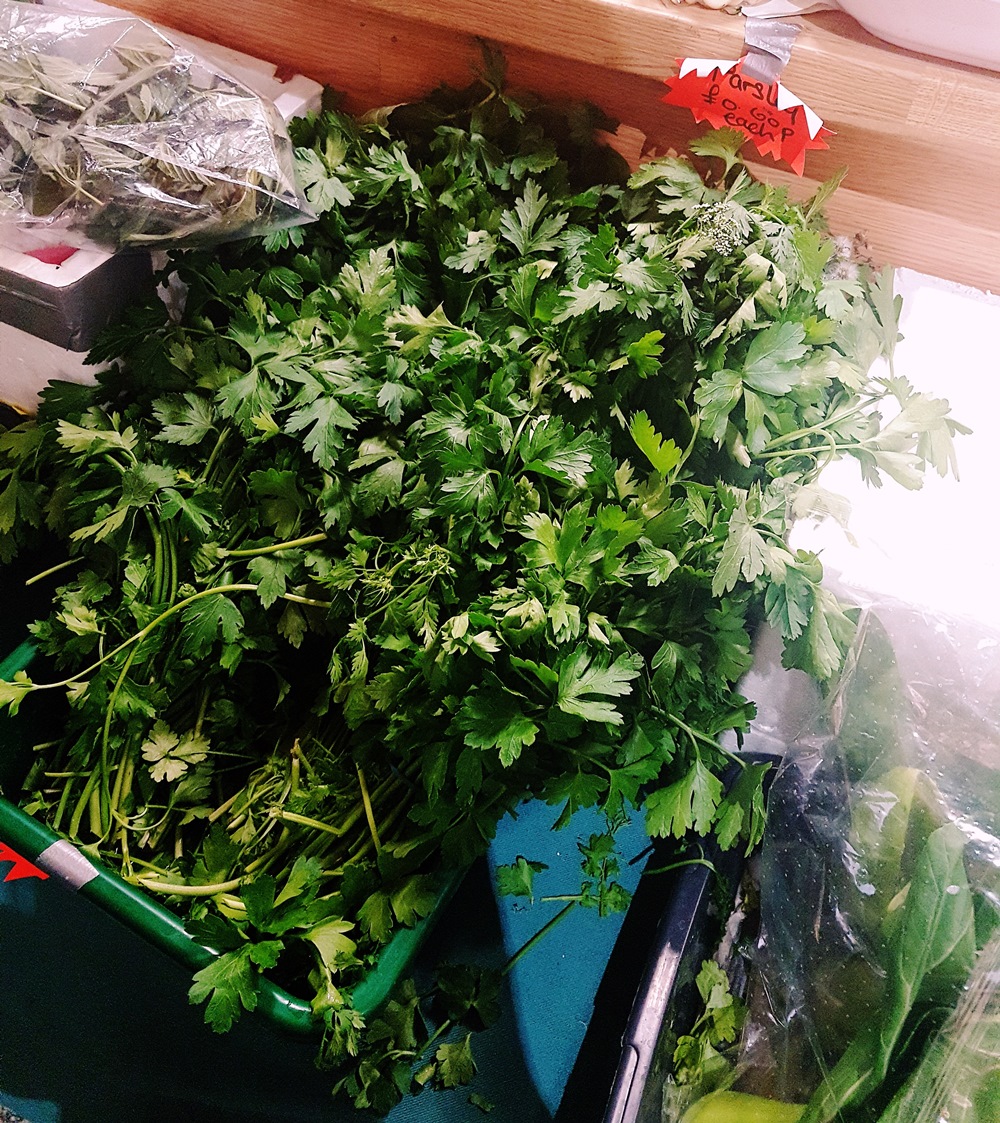 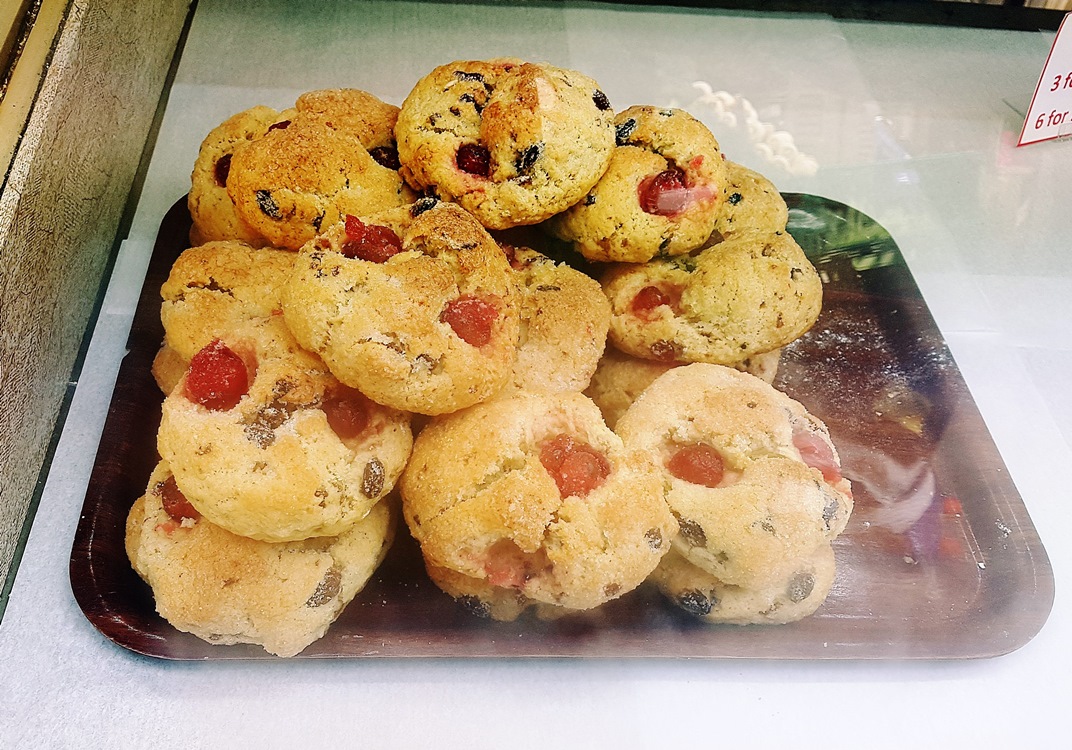 I had been put off by two factors. Number one, I’m a millennial, and that means I’m skint. I don’t have tons of cash to splash on premier cuts of meat. I tend to invest in good quality food when possible, being such a foodie, but I was convinced that the bulk buying power of a supermarket meant that their prices were as low as you could go –  putting market prices far beyond my means.

The other factor was time and convenience. Sainsburys Delivery is just soooo handy! You can shop at midnight if that works for you, and you don’t have to spend an hour traipsing round a store.

But when I visited Kirkgate Market to pick up the goat for my Afghan dinner, I spotted something that made me rethink my assumptions.

Those sort of deals reminded me of the epic “3 for £10” offers than Tesco ran in my student days! Time-vacuum or not, I could put off my market-shopping dreams no longer!

Planning our visit to Kirkgate Market

We chose Saturday as market day. My friend Ellie gushed about the time her boyfriend picked up 10 steaks for a tenner late on a Saturday afternoon, when the stalls were all trying to get rid of produce before they closed til Monday. The one worry that stuck in my mind was that choice might be a bit limited by then.

Being a bit of a planning nerd, I actually have a food spreadsheet that I fill out before doing each food shop. I fill in when we’re going to be out, when we’ll need a quick meal, that sort of thing. Next up is brainstorming recipes for each night. I even have a suggested “pasta night”, “tortilla night” and also a “blog night”, although I ignore it half the time. Next I write out a list of all the ingredients I need for each meal (plus the extras like milk and bread), sort them into the categories they’ll be found on the website, then head over to Sainsburys to put them all in the basket. I’d even make a separate list of veg that would go off too soon and sync it to both our phones to buy closer to the time. 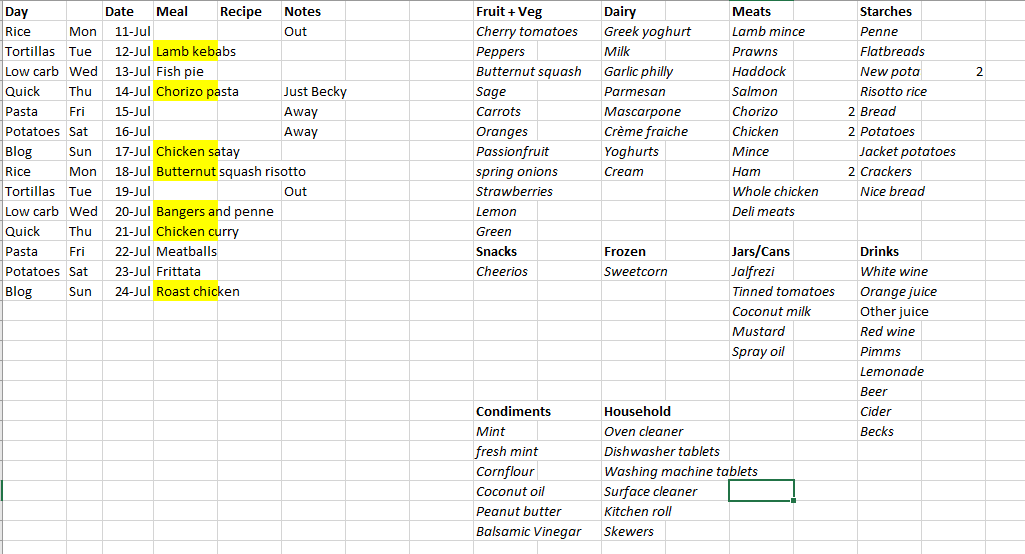 But part of the joy of visiting a market is that we can go with what we feel like, isn’t it? Whatever’s on offer, whatever looks good… If we go in with a shopping list, it would probably end up being the stuff that’s expensive this week!

Plus, can you even get Cheerios at the market? I doubt it! And we always get our booze delivered, there’s no way I could carry all those bottles back from town!

In absence of a proper plan, I decided the best course of action was to turn up, do a browse of all the stalls, work out what we want to cook based on the deals available… then write it down, create a list and then, finally, go buy the stuff – meat last, to keep it cool, and noting down anything we hadn’t managed to pick up for our smaller Sainsburys shop the next day.

Unfortunately my boyfriend, as boyfriends are wont to do, screwed up my action plan completely.

First things first. We miraculously remembered to go get cash out before arriving at the market!

Our usual Sainsburys shop tends to be around the £200 mark. That feeds us for 2-3 weeks depending on how often we eat out. We took out £100 in cash, hoping desperately that we wouldn’t accidentally spend it all. 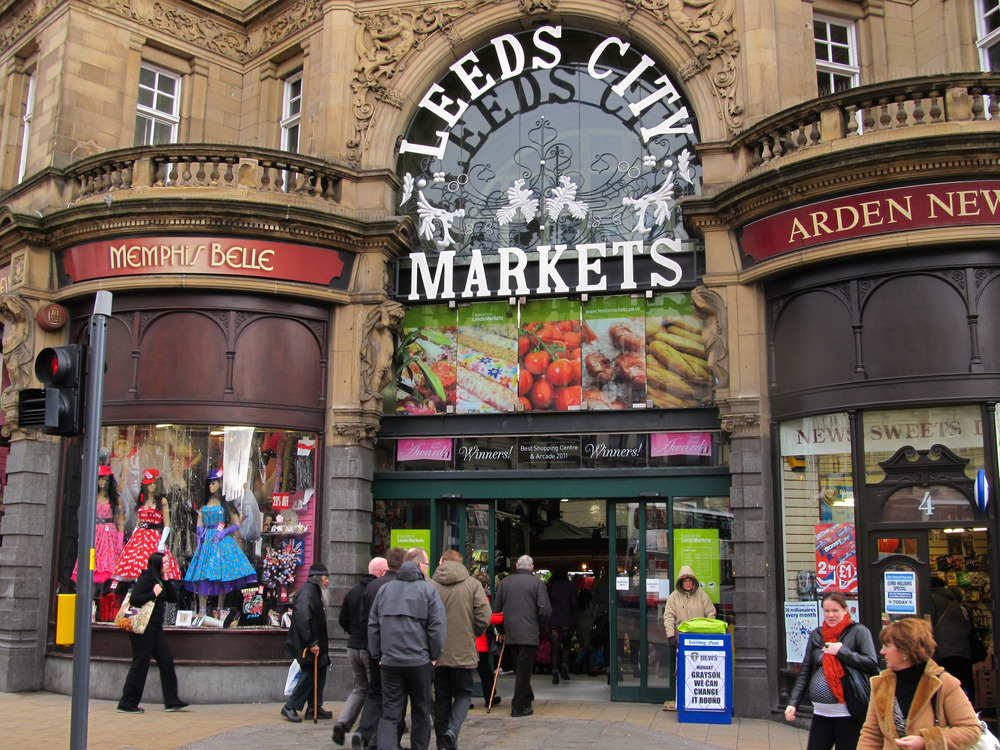 We arrived at Kirkgate Market around 2:30pm (a little bit later than planned but who’s on time on a Saturday?) and headed straight to our first stop, the butchers was where I’d seem those amazingly cheap meat packages.

This is when things started falling apart. My careful plan had not taken into account that TC doesn’t like shopping. He was very “right, what are we getting?” while I was very “let’s just enjoy the experience”. Such a cliche.

I won (natch) and dragged him round a load more stalls, pointing out “look at those crabs wiggle” and “look at the size of those turkey legs!”. We wandered around for about fifteen minutes before, in a similarly cliched fashion, ending up back at the first stall we looked at: Bennett’s Butchers. 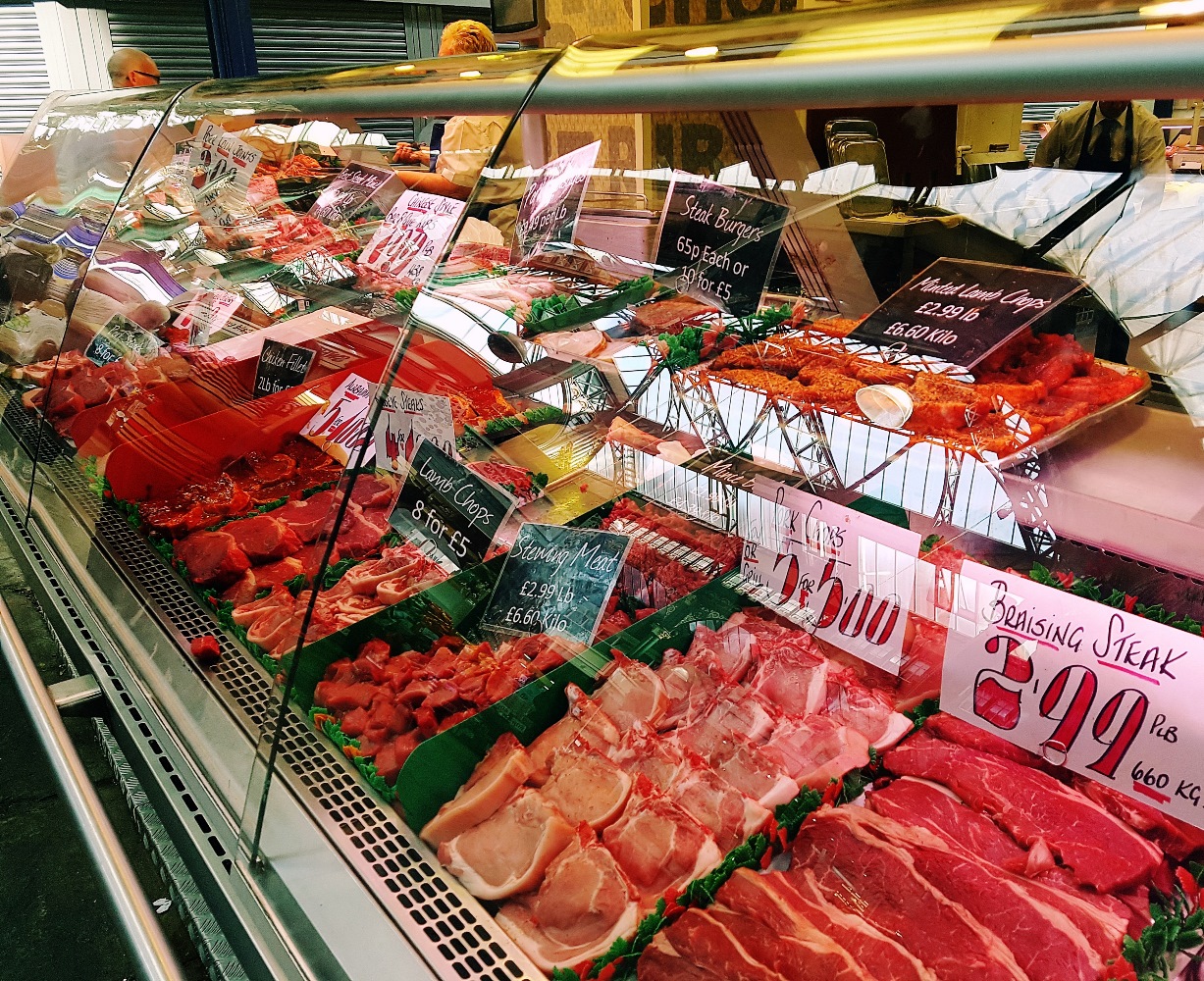 The plan to get veg first and meat last went out the window on the words “8 steaks for a tenner!”. TC did wangle us an extra ribeye though! He was keen to get one of the meat packs, but I persuaded him that we’d do that some other time.

The one thing I was certain we weren’t leaving without was ribs. Our Reds BBQ budget is through the roof thanks to Deliveroo, so I had designs on making my own. Next we added four chicken breasts (what can’t you do with chicken?) and we persuaded into getting a fantastic looking “salmon cut” of beef for a Sunday Roast. We finished off our meat order with half a kilo of steak mince (why get minced beef when you can get minced steak?).

And how much for this wonderful pile of meat? 30 quid.

My food planning out the window, I frantically scribbled down four different steak meals – steak pie, steak burritos, steak stirfry and plain ol’ steak, in case you’re wondering – and decided what veg we’d need for the next couple of days. TC took the opportunity to sneak off to the fish stand, Arthur Welham, and buy absolutely tons of mussels for £4. That’s the kind of subterfuge I can get behind! 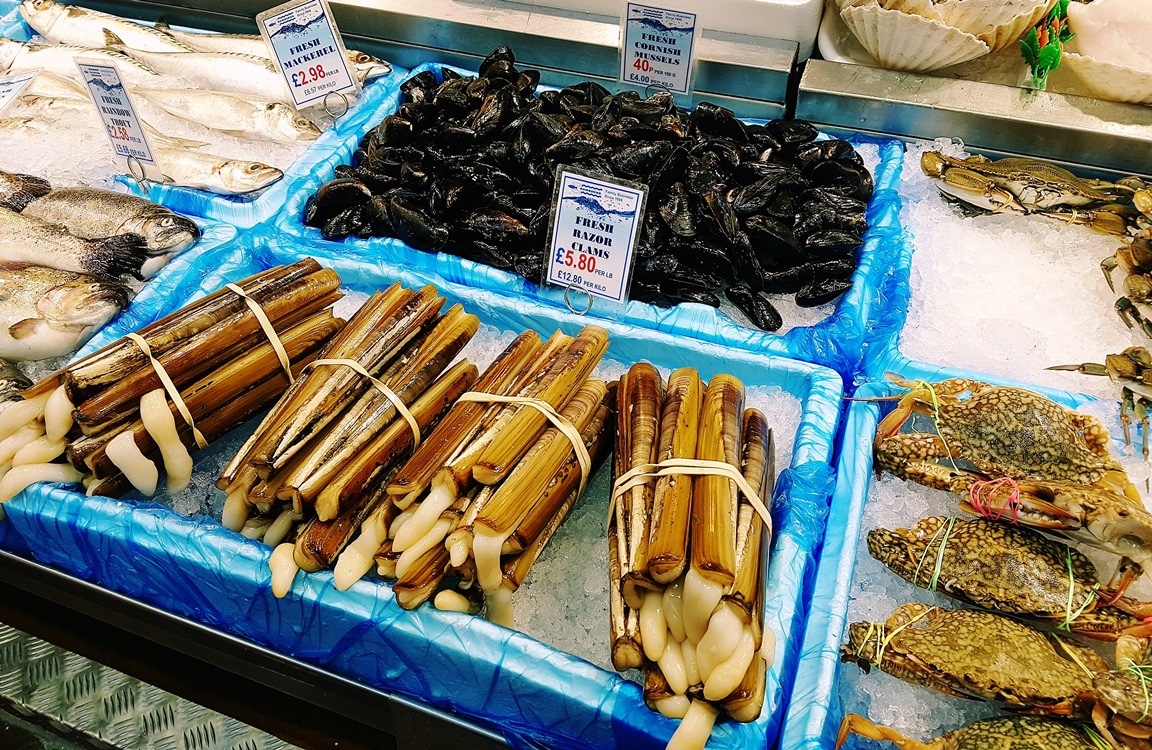 From the veg stand, Tony Banks & Sons, we got some onions, baking potatoes, green beans, apples, satsumas and berries. I’m terribly fussy about my berries, but TC was getting impatient so I just grabbed the closest punnet. Next time I’ll definitely take a bit more time, the one we got was a bit squidgy. 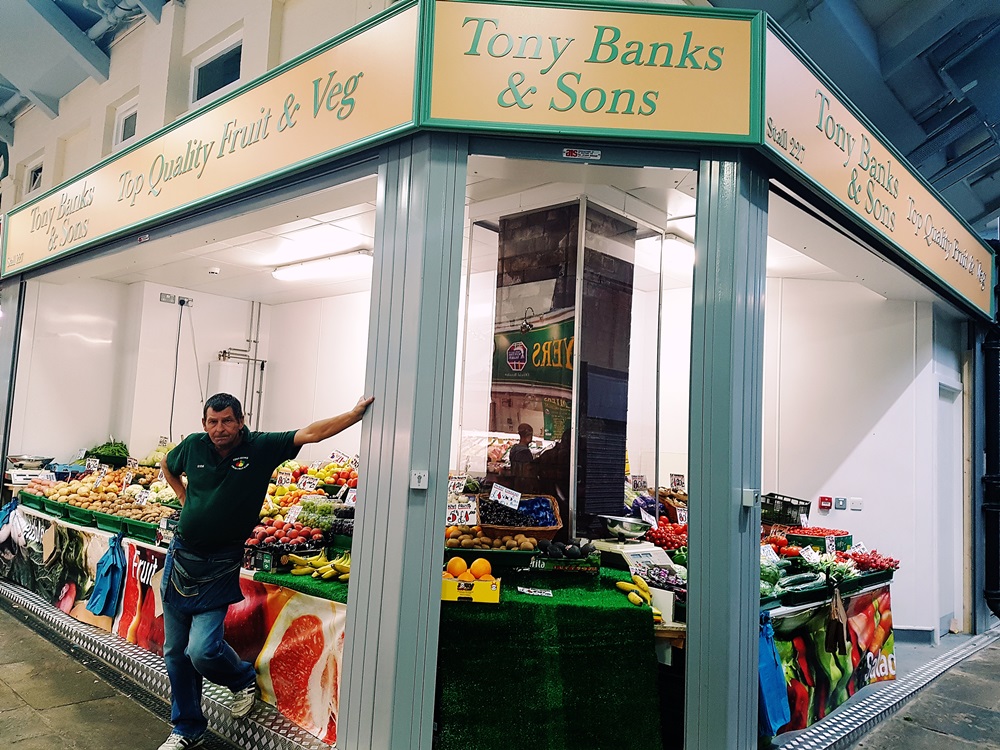 We went for divide and conquer next. TC picked up a huge wedge of chorizo (at least three times as big as we needed, who said men knew anything about size?) and some fresh farm eggs from Malcolm Michael. 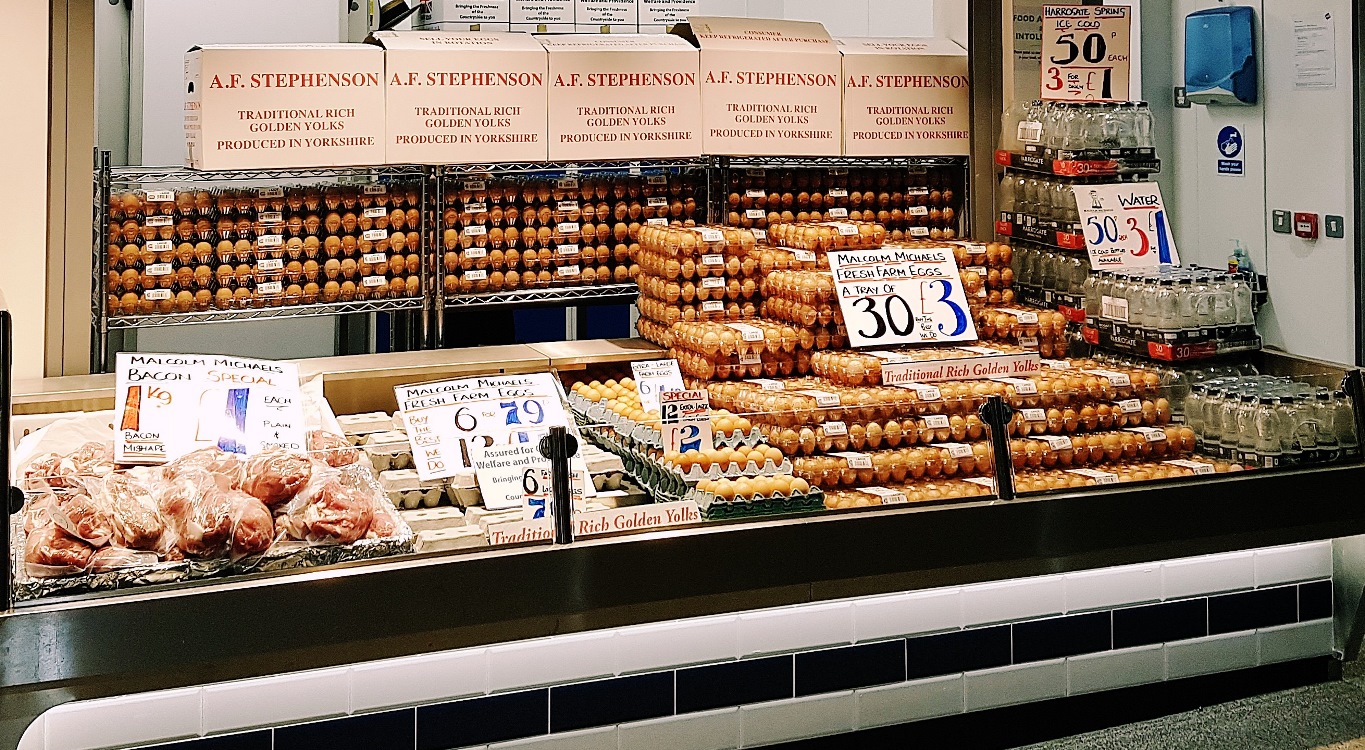 Meanwhile I bought some crushed chillis from the spice stall opposite. The Spice Corner had a fantastic range of products – fresh and dried herbs and some more exotic vegetables like plantain – but there was literally one person serving the cluster of people around the stall. It took about twenty minutes to pay my £1. 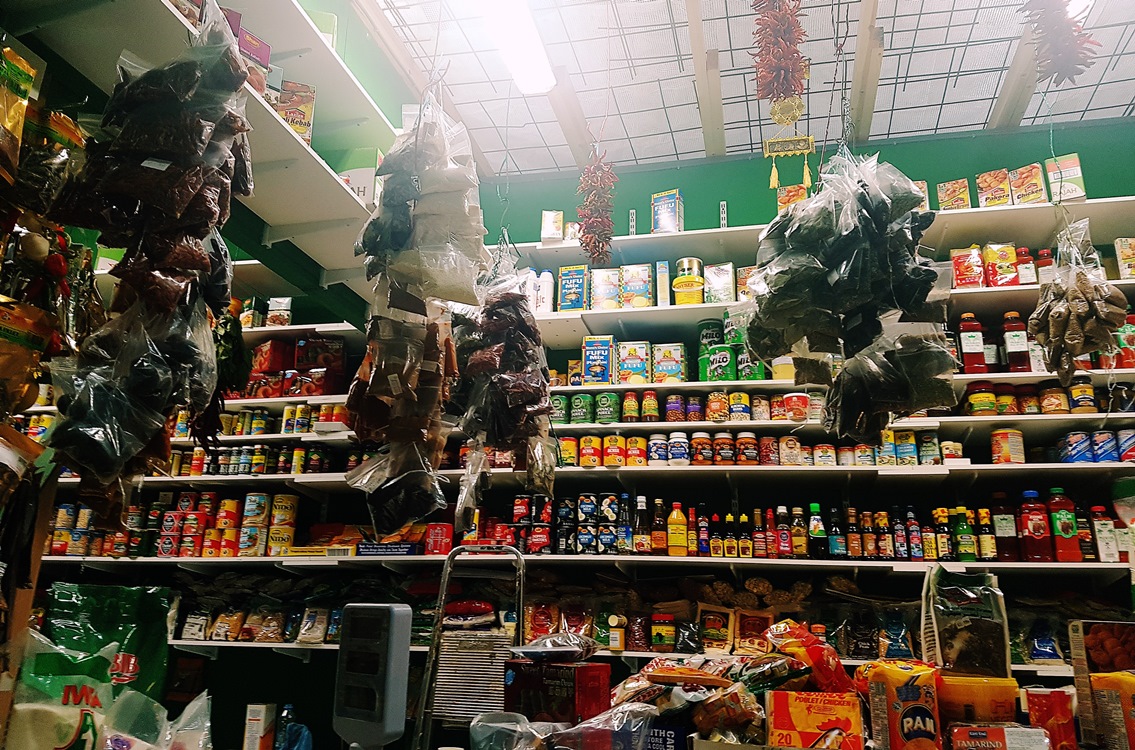 TC’s heavy load was weighing him down (he was carrying everything <3) so we decided to pick up a “good job on the shopping” reward for ourselves. This came in the form of four scones from the Firth & Payne bakery, plus one cheeky apple turnover. We’d also planned on grabbing some nice crusty bread to go with the mussels, but the options were limited to cakes or packaged supermarket-style loaves. 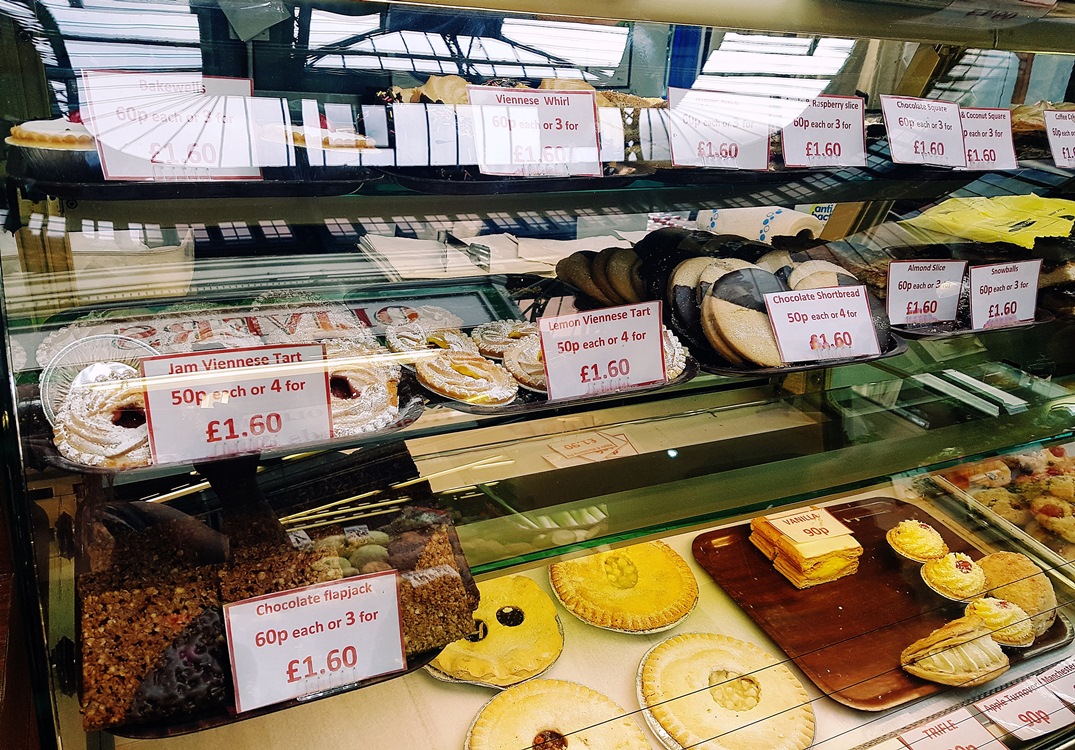 Our final stop was Brian’s Florist, to pick up some orchids for TC’s mum. They were having us over for a barbecue later, and nothing quite says “thank you for feeding us” like pretty flowers. 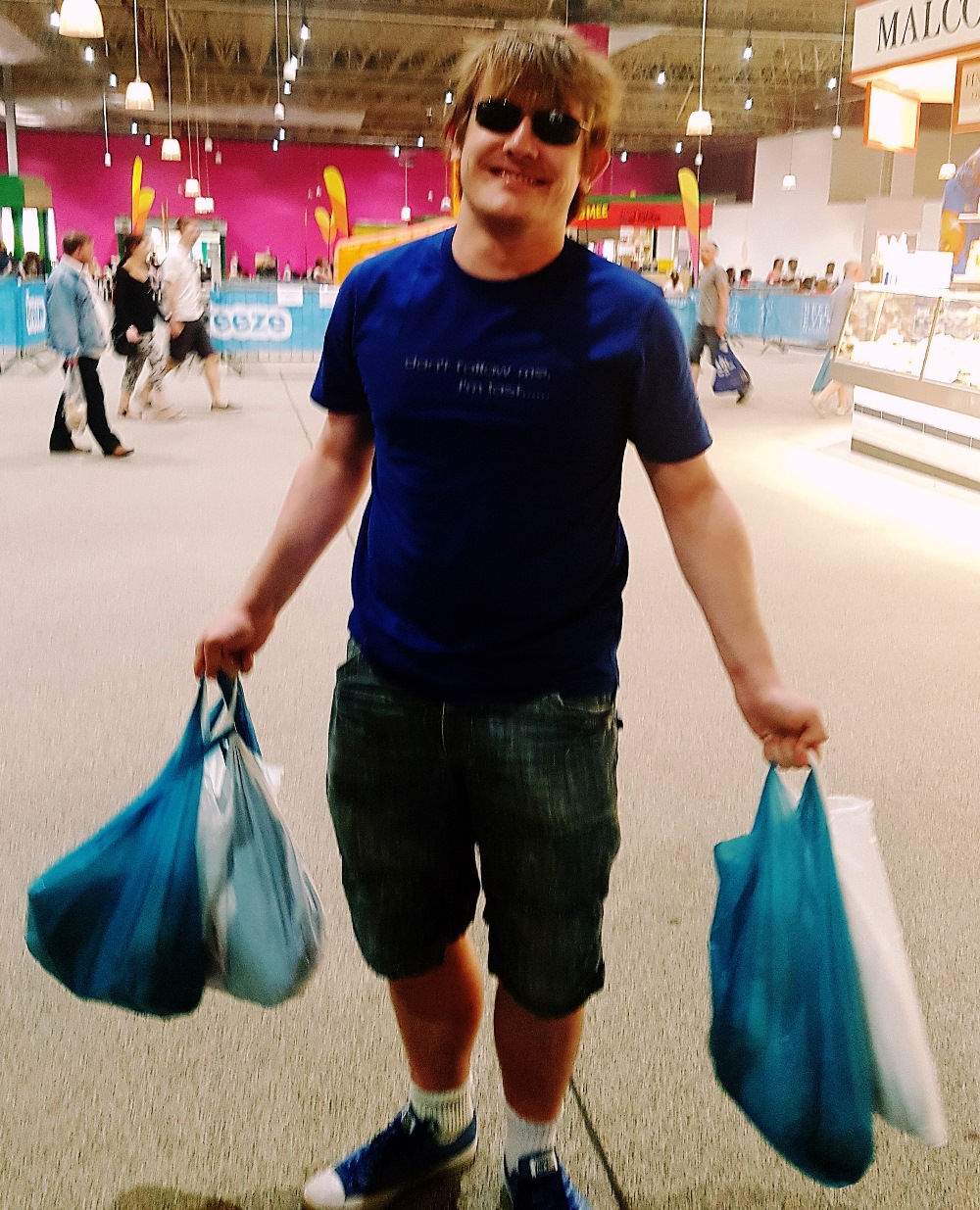 “Put us forward in time by a few years,” commented TC as we struggled home with the bags, “and not much would be different.”

“Not true,” said I, “I would totally be able to pull off one of those little old lady shopping carts by then!”

And what did we make?

Warning, some photos below may be too damn delicious looking. I’m going to do recipes for some of them but there’s quite a few dishes here. I’m only averaging about 2.5 blogs per week… so let me know which ones you’re most interested in!

Here’s the mussel and chorizo bouillabaisse that TC made on the Sunday. PRO TIP! You’re supposed to use mussels on the day of purchase! A lot of them were alright but we were very sad to have to throw some away. 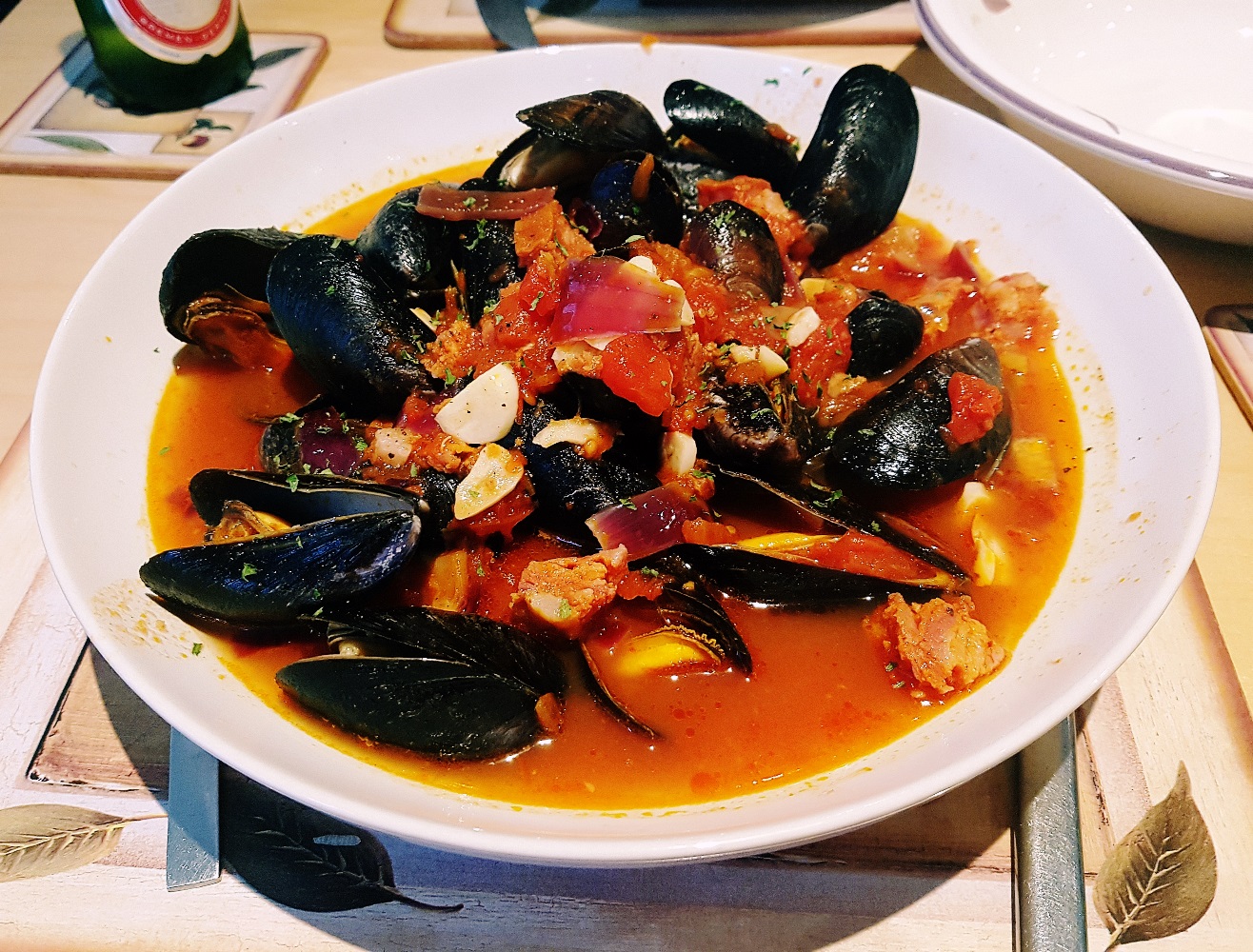 Here’s the steak meal. The baked potatoes from the market were so good they literally tasted already-buttered. Served up with salsa, peppercorn sauce (not shown) and salad, just the way my dad makes it! 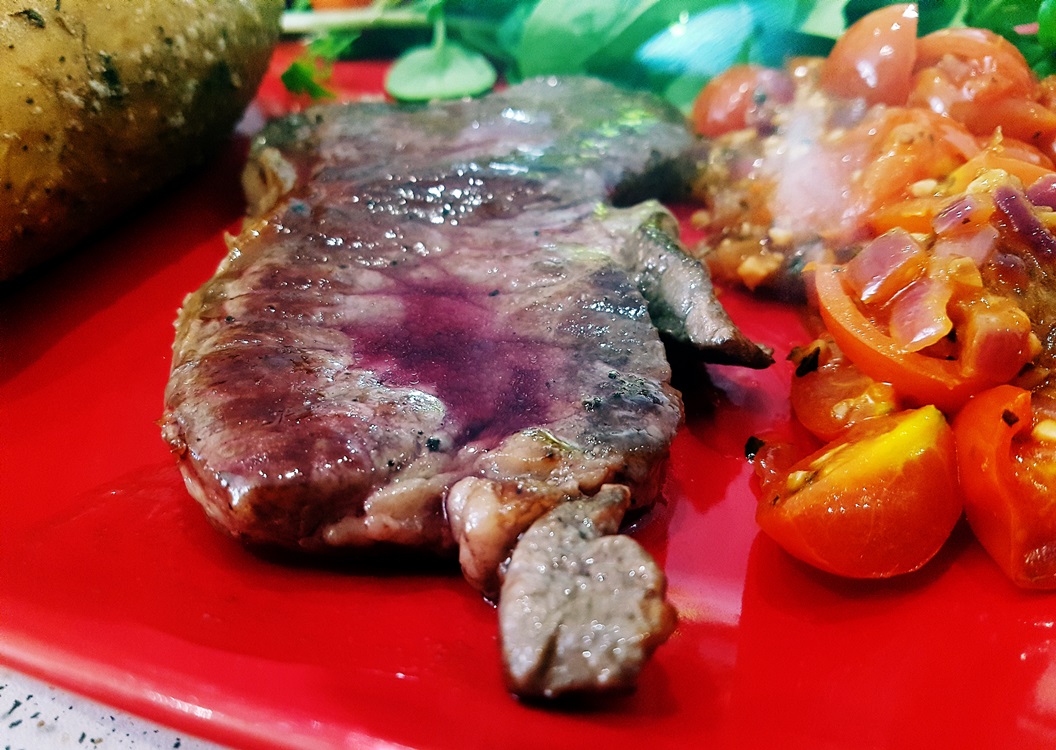 Here’s a quick gnocchi dish made with the rest of that chorizo. 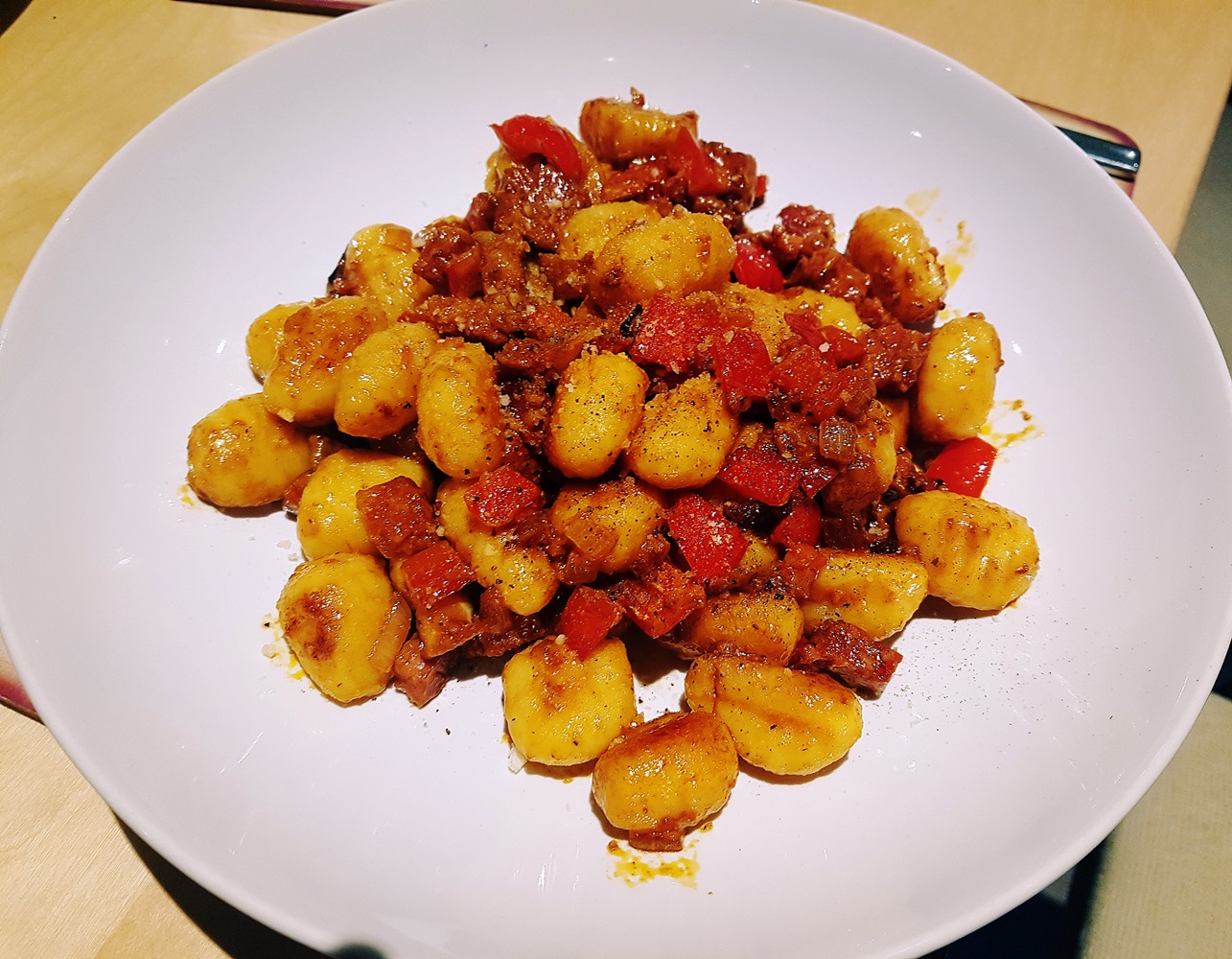 Here’s steak burgers made from that incredible steak mince. 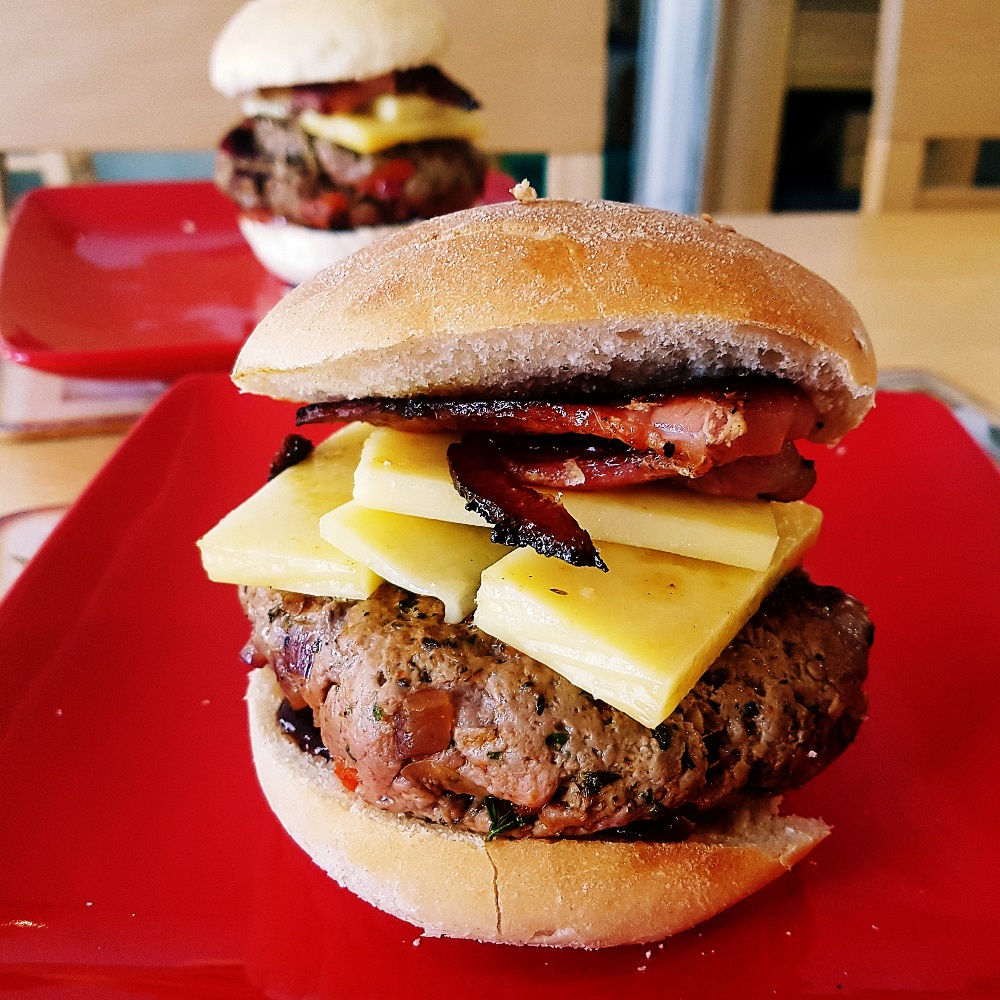 Here’s the ribs, slow-cooked then finished off in the oven. Lashings of barbecue sauce, and crispy potato wedges and green beans. 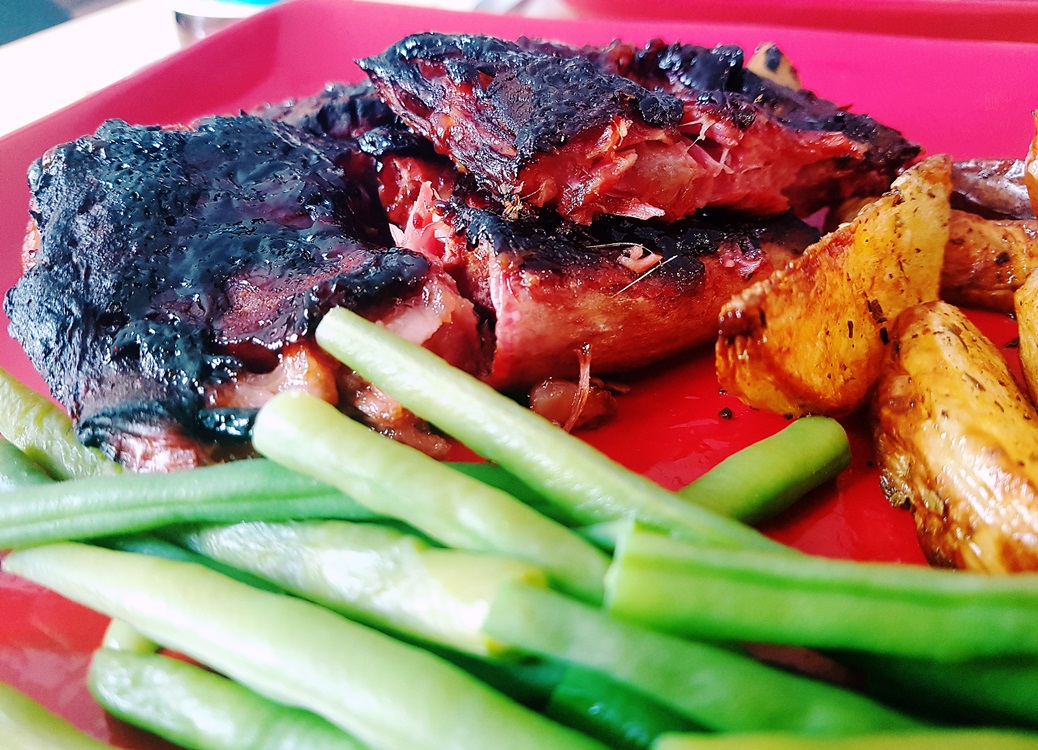 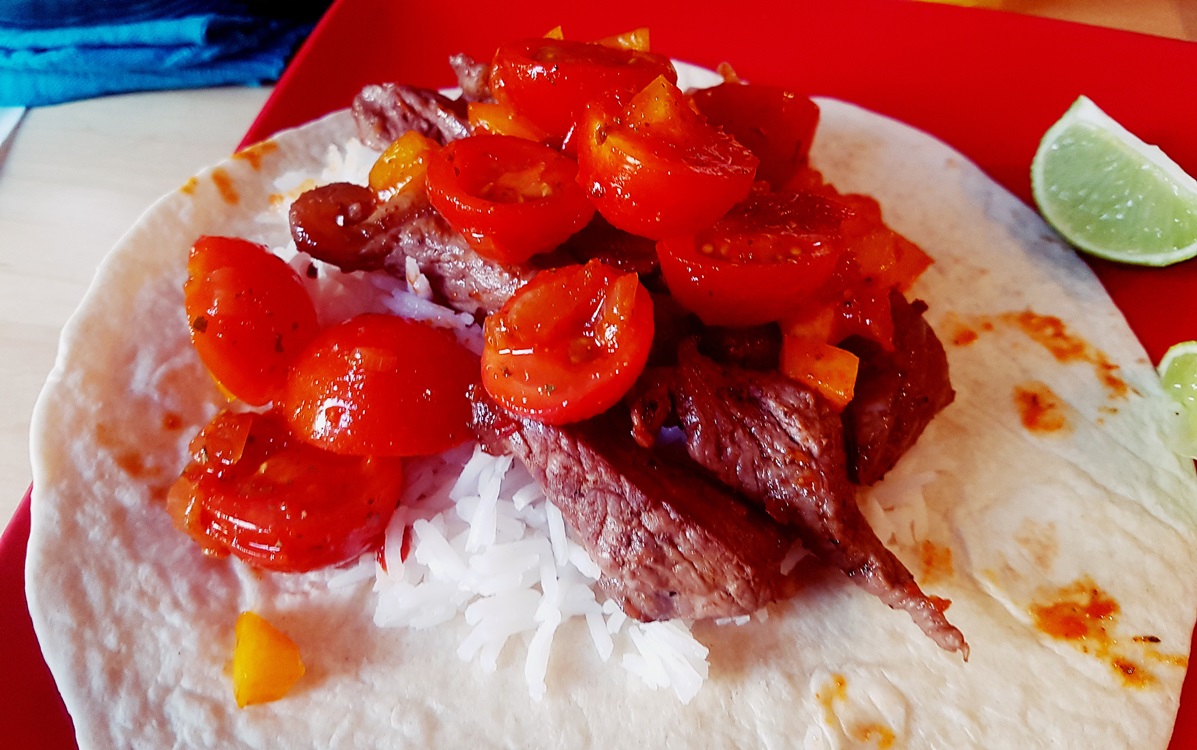 We still have plenty of meals left to go too, so keep an eye on my Instagram for more pics! And please do comment to let me know which recipe(s) you’re most interested in seeing 🙂

Kirkgate Market is open Monday to Saturday, 8am to 5:30pm, though I’d recommend going along before 4pm as the stands start to close up by then.

Wimbledon seems like ages ago, and it appears I forgot to blog about the ridiculously awesome array of food I...