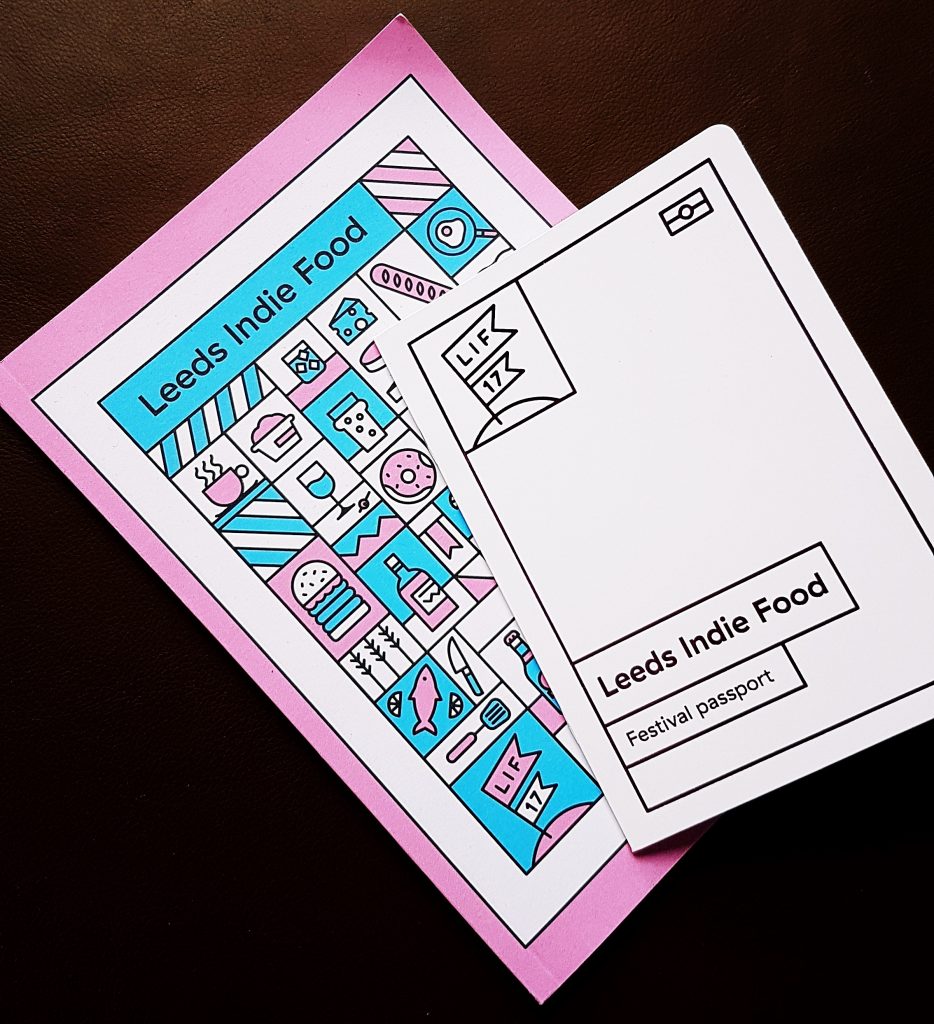 I bought a LIF Passport, and went along to a few of the participating places for discounted food. But I also bought tickets for me and TC to one of their events: Breakfast for Dinner, at Laynes Espresso.

TC actually chose this event from a shortlist I put together of all the events I wanted to go to (he was very mean and didn’t let me do all of them). The concept was fairly obvious – we would be eating meals normally seen as breakfast food for dinner.

The UK I think is a lot pickier about breakfast food than the rest of the world. Mexico has breakfast burritos, and I remember from my trip to America that salad and quiche could be served for breakfast. In England we have very limited options: we can only have savoury food as long as you could feasibly put it in a Full English.

So we weren’t entirely sure what we’d be eating. 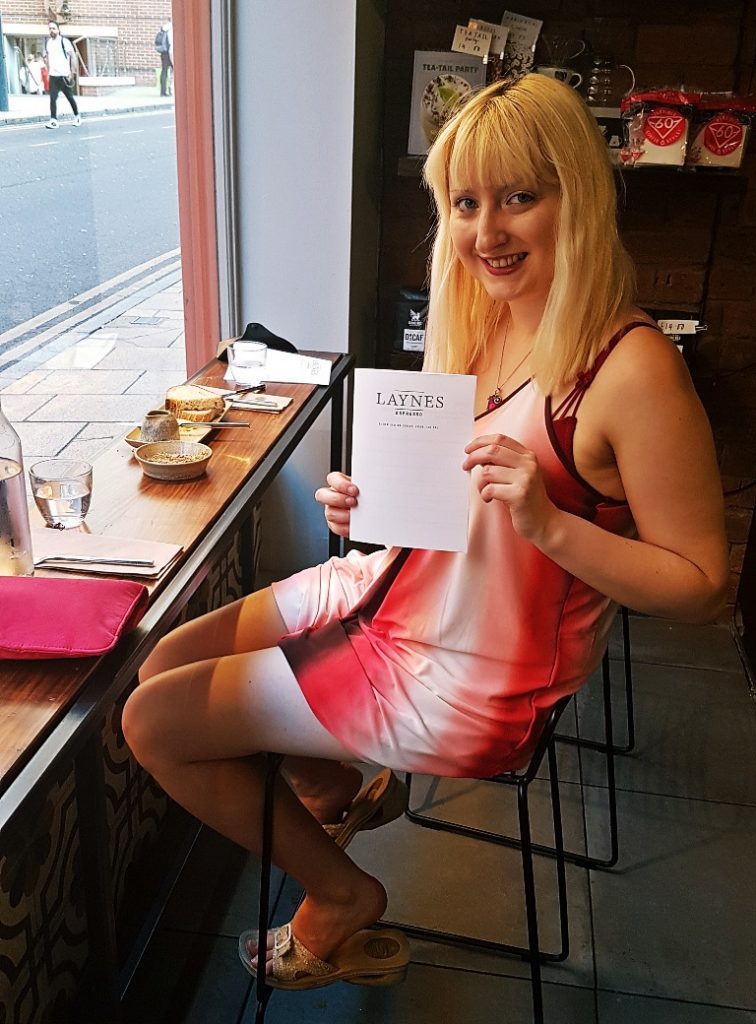 Breakfast For Dinner at Laynes Espresso

We turned up at Laynes for about 8pm. The usual casual coffee shop had been transformed into a simple but elegant evening restaurant. We were shown to our assigned table, brought some bread and left to peruse the menu.

The bread in question was served with cured egg yolk butter, rapeseed oil and za’atar, a spice mix containing sesame seeds and sumac. The deal was you spread butter on the bread, then pour some rapeseed oil over the end and dip it into the za’atar. It was pretty damn tasty. 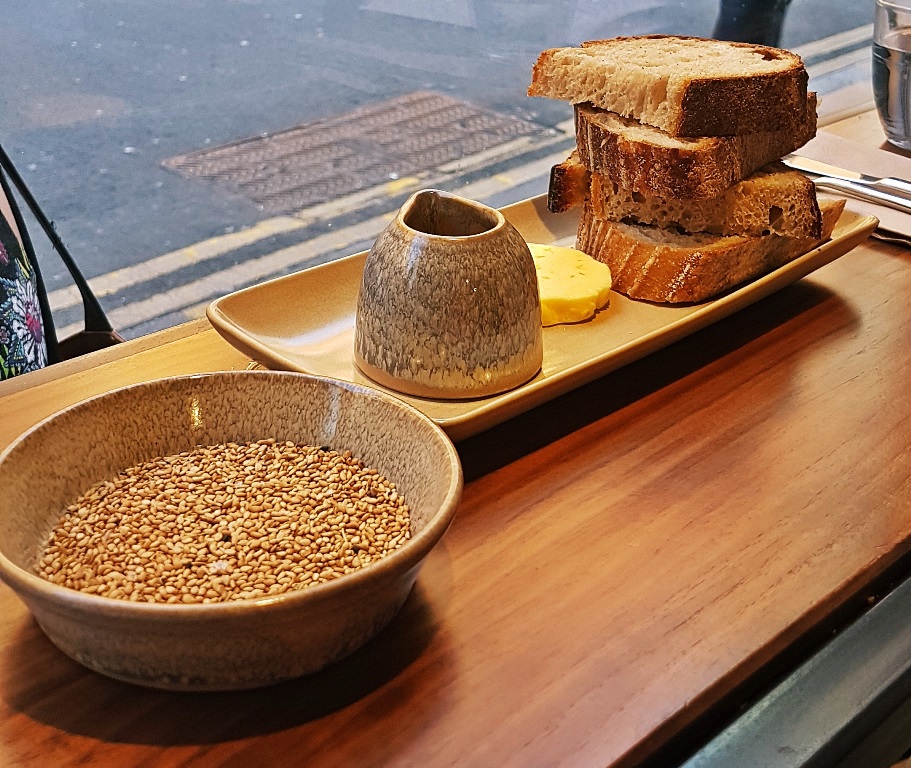 Unfortunately when they first came round to take our order we were still deciding, and then it took a while for them to come around a second time. We ordered drinks then three small plates to share.

The drinks menu was heavily inspired by breakfast drinks – tea and coffee! I started off with a Grand Old Lady Grey, which was nice enough to make me want to try a Lady Grey tea. 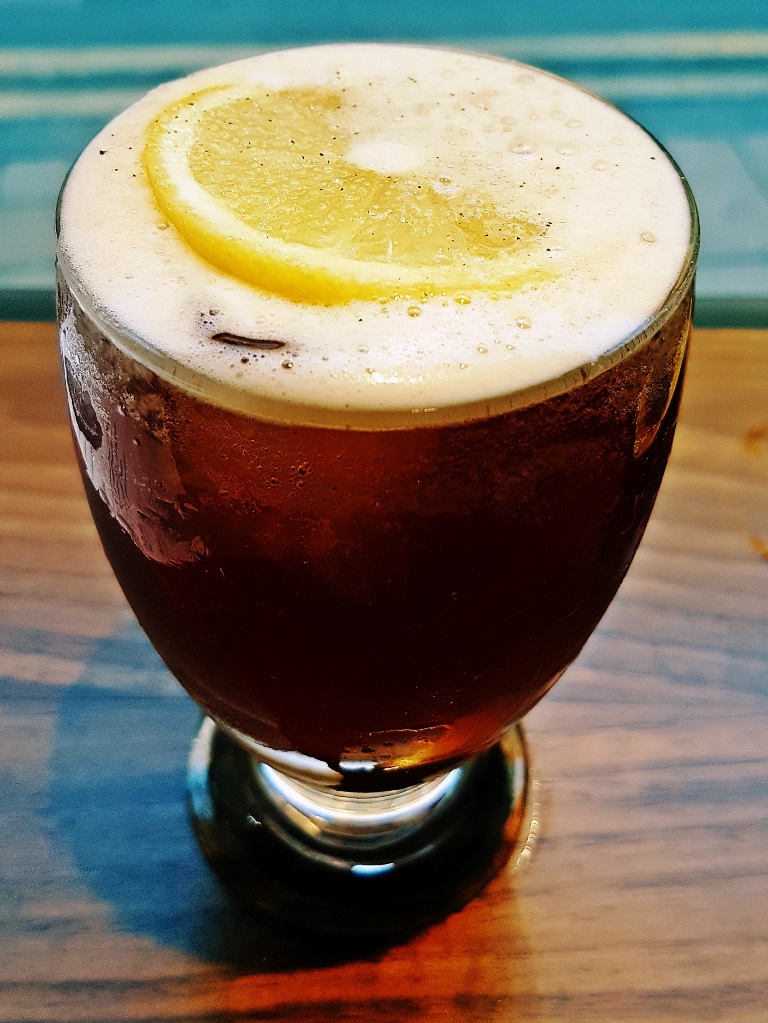 TC’s choice of Cold Brew Old Fashioned (which I’d had the non-alcoholic version of earlier that day) also went down a treat. 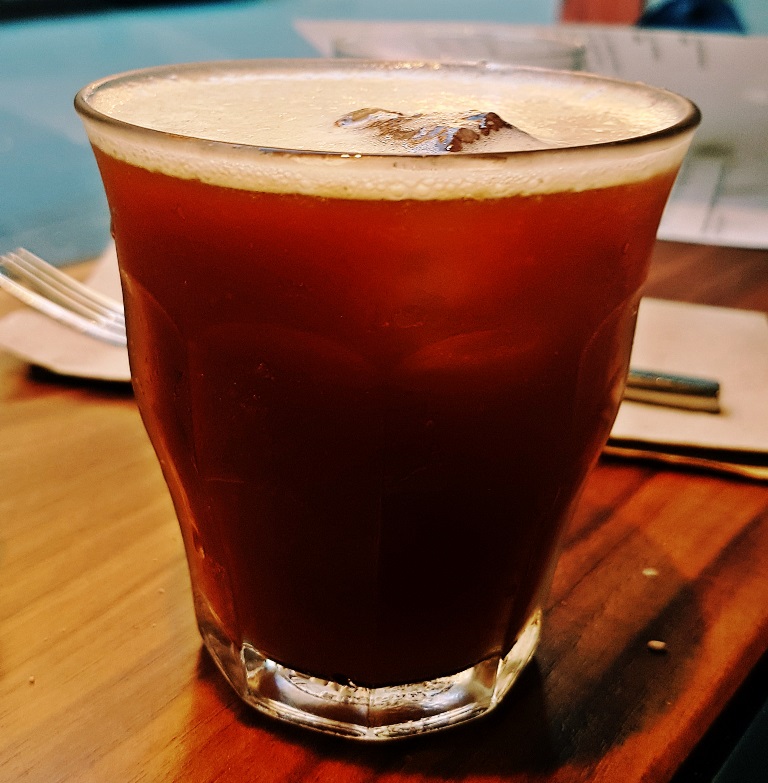 Our food arrived quickly after we ordered it. We’d decided to share three small plates on the recommendation of the waitress. The first to arrive was Cornflake Fried Duck Egg, Avocado, Togarashi Dukkah and Wild Garlic Mayo. 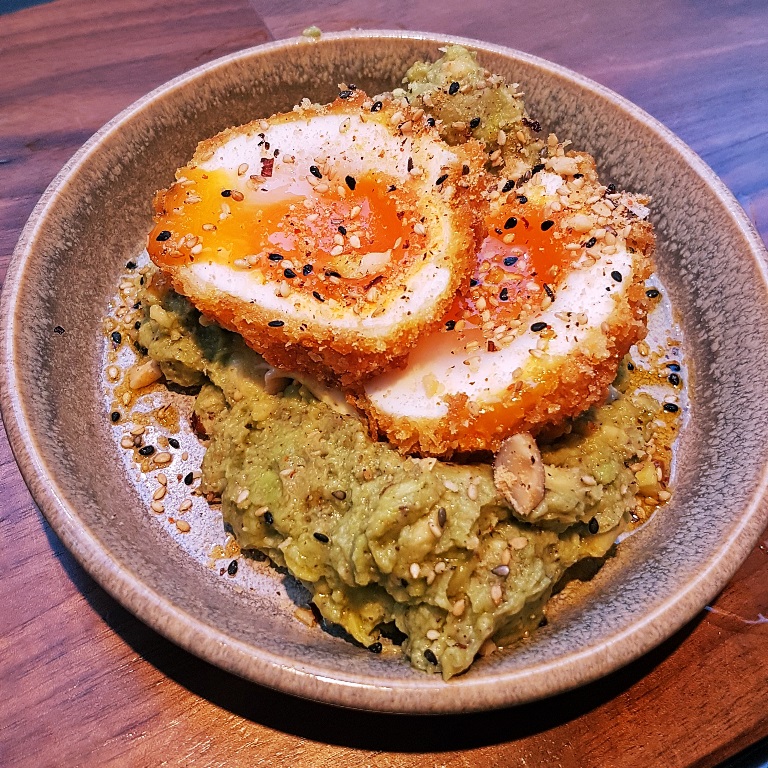 The duck egg was delicious and the crunch outside was a great contrast to the smooth avo and mayo.

The next two dishes arrived together and TC and I quickly shotgunned one each. I don’t think we even gave each other a taste. 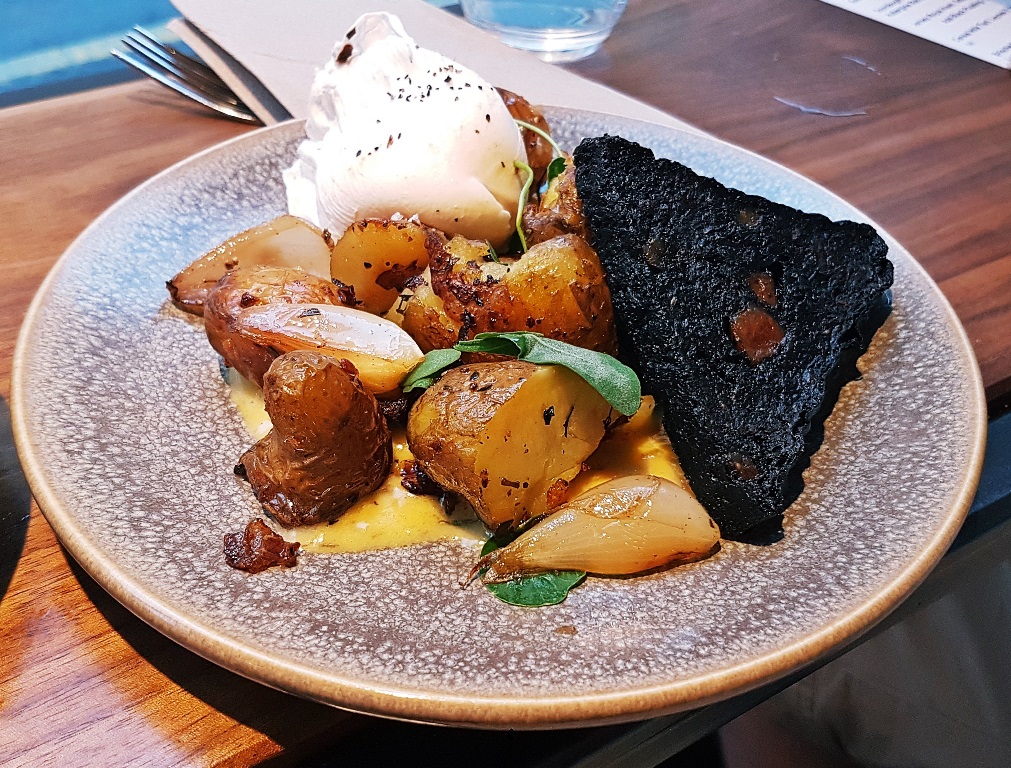 My own plate was the Southern Fried Chicken with Cornmeal Waffles, Peanut Butter, Mustard Syrup and Sweet Pickles. Honestly, most of the latter ingredients almost put me off ordering it, but I completely failed to find chicken & waffles when I was in New York 2 years ago, so I decided to chance it. And wow am I glad I did! It was absolutely stunning and I didn’t dislike a single element of the dish. 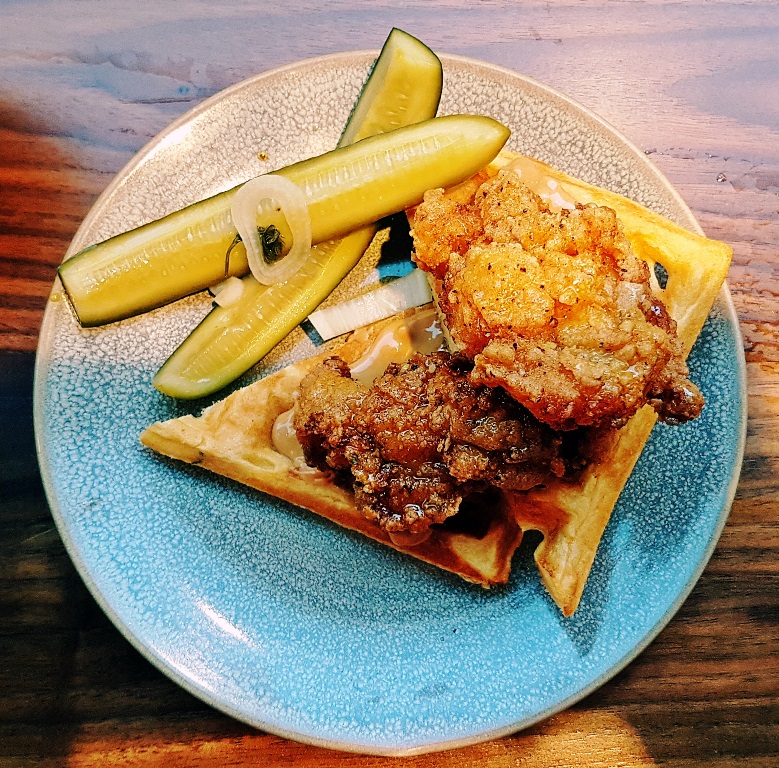 We also ordered a side of The Reliance Charcuterie, but unfortunately it didn’t turn up. We were actually kind of relieved – the meal was pretty filling but we needed to save room for dessert.

We ordered more drinks while waiting for dessert. TC chose the dessert cocktail, fittingly titled “Cold Chocolate”. It was basically a dessert in itself, seeing as it had ice cream in it. 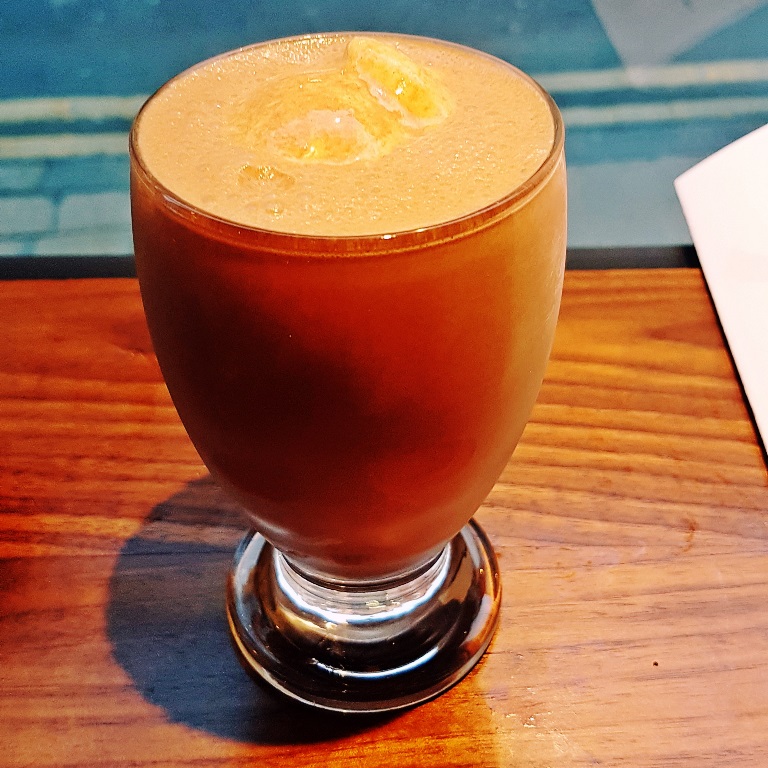 I went for the Cereal Milk White Russian, which tasted almost alarmingly of cereal milk, and hardly at all of vodka. 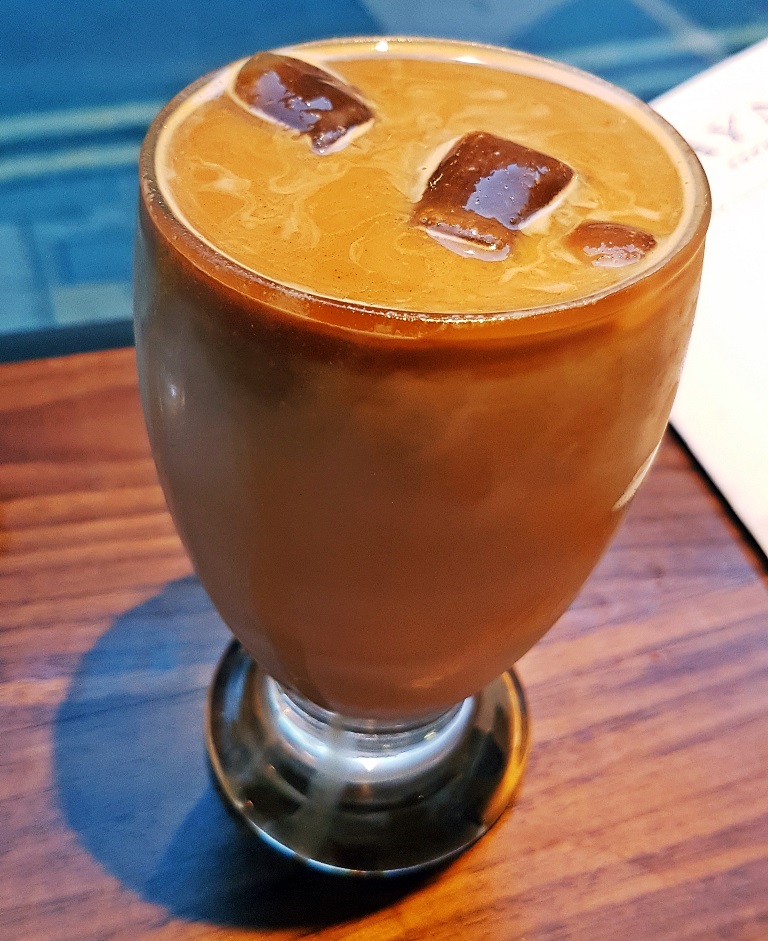 Meanwhile our dessert turned up. This was the real reason I’d been excited to come to this event. The American breakfast meal, French Toast, is one of my all time favourite things to eat, and it’s going through such a fad at the moment thanks to Buzzfeed Tasty that I didn’t really doubt it would be on the menu.

But they outdid themselves. The Brioche French Toast was stuffed with Peach and Vanilla Jam and served with Bergamot Cream and Lady Grey Sugar. I was so full but I couldn’t bear not eating every single bite. 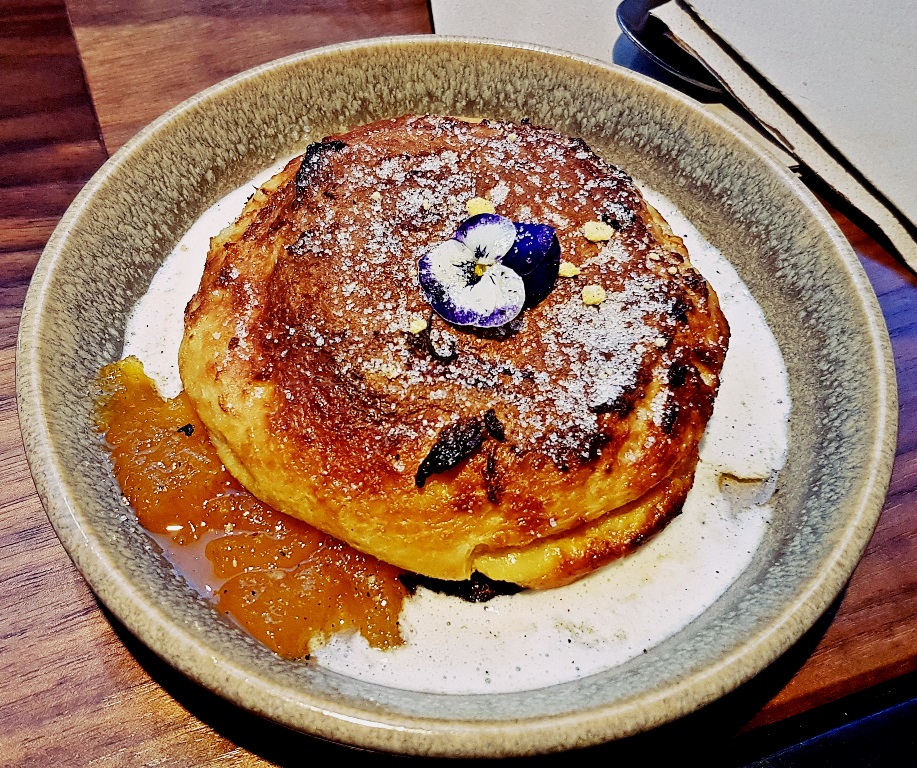 Overall I really enjoyed the meal. It was an interesting twist on some classics, plus some dishes I’d never have thought to try. The chicken waffles and the french toast were utterly spectacular. The service was a little slow, and they forgot one of our dishes, but as cafe staff normally I imagine a sit down meal was a lot more intense than their usual clientele.

Leeds Indie Food Festival was fantastic – keep an eye out for my blog about the other things I went to, and don’t forget to follow them on social media so you don’t miss next year’s event.

On Saturday I took part in the first ever complete

Something super exciting happened last month - I got invited to my first ever press event, thanks to Leeds Loves...