I’d been dying to try out Aperitalia at Veeno in Leeds for weeks.

I came across it while browsing randomly on the internet, as I am wont to do. Aperitalia is a special evening of wine tasting, selecting a region of Italy and showcasing two wines and a selection of spuntini (appetisers) which pair well with them. Even better, it takes place twice a month! And even even better, it’s just £9.90pp for two glasses of wine each and two platters of spuntini! 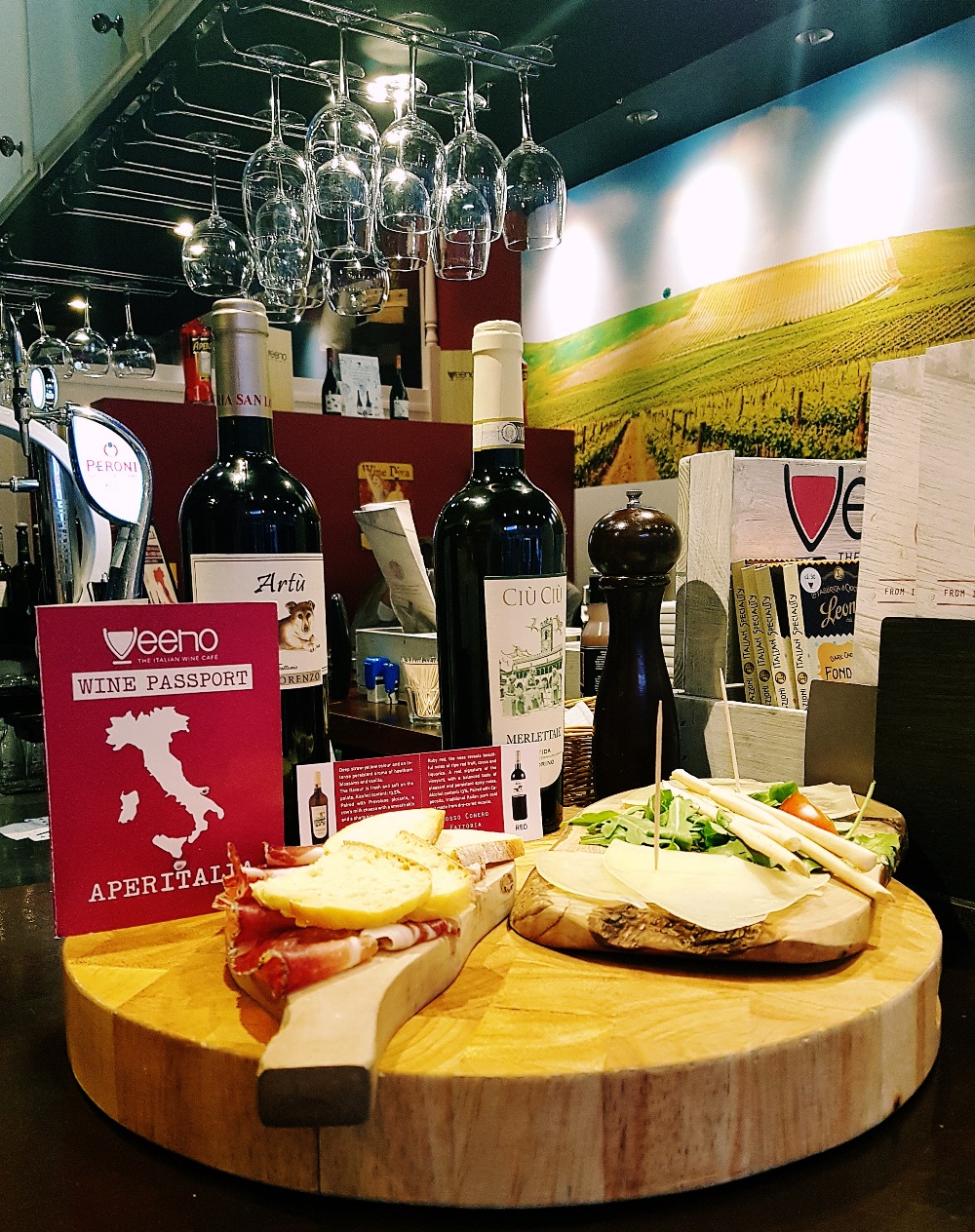 And for some reason, it’s been impossible to fit it in! The first time we tried, I ended up having networking that evening, and the second time, TC was working late. Even worse, that second time was the prosecco tasting!

I left myself far too much time to walk there from networking and arrived crazy early, so stuck straight in with a cocktail. The Veenopolitan was peach and strawberry juice, shaken with vodka and Syrah rose wine. I actually much preferred it to the original Cosmo, which is often a bit too sour and alcoholic for my taste. 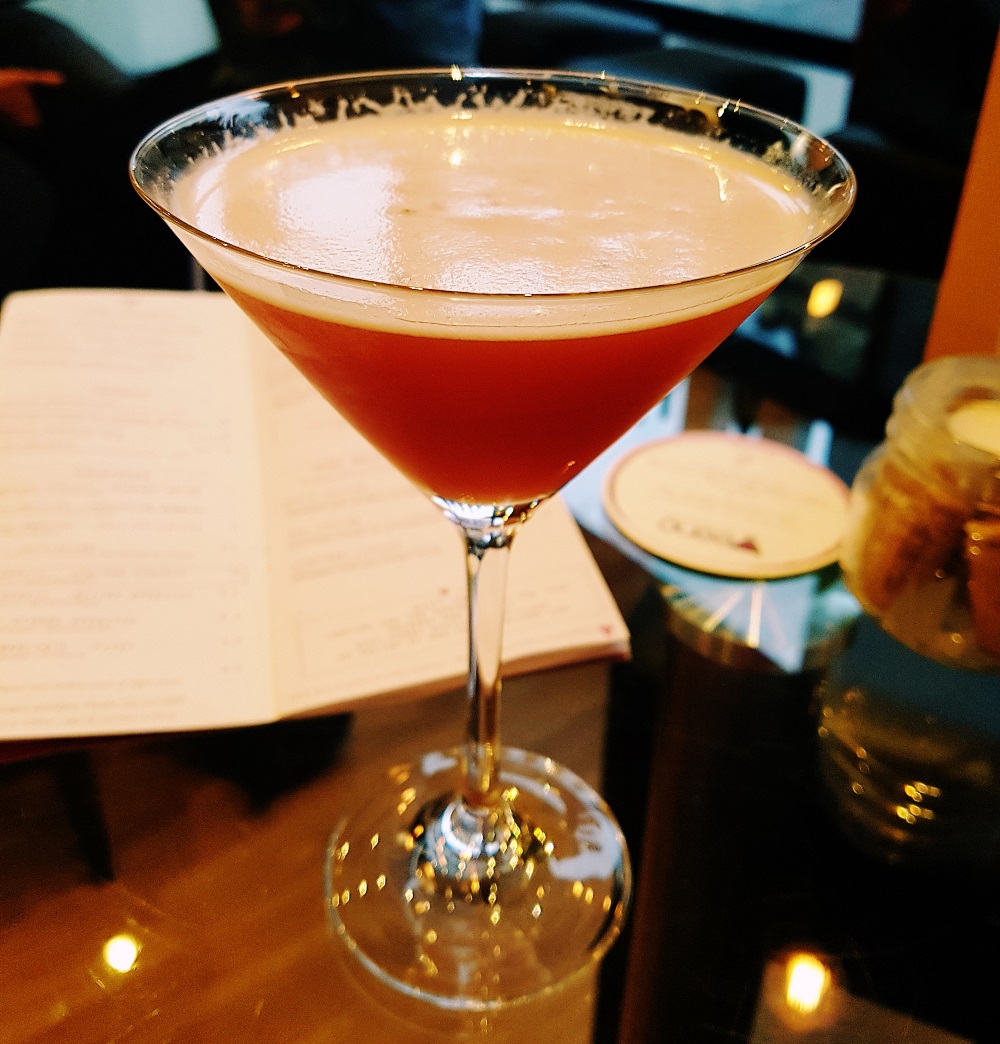 Then my date arrived, and our waiter got us started. First off he gave us our wine passports! These are much better than an actual passport, because they don’t have a daft photo in and they give you free wine after you’ve used them five times. 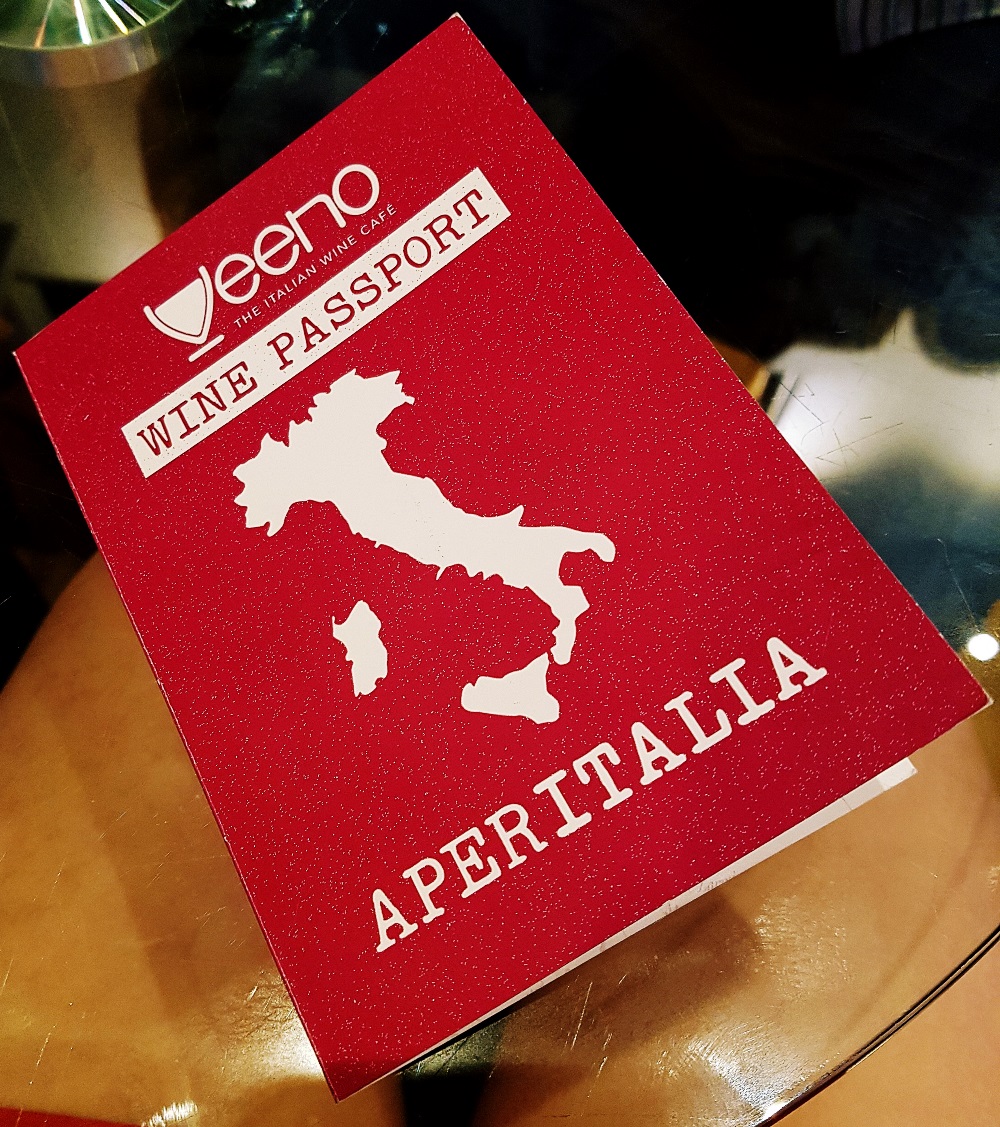 He told us that this evening we were looking at wines from the Marche and Umbria regions, found to the east of Tuscany. Not somewhere I’d particularly heard of for their wine before, if I’m honest, but isn’t that the whole point of the evening?

We’d both had something to snack on earlier in the evening – a buffet at the networking for me, some quick pasta for him – so we weren’t starving. This meant we were able to actually enjoy the flavour pairings without wolfing them down immediately.

Our first wine of the evening was an Offida Pecorino Le Merlettaie Ciù Ciù, a “deep straw yellow” white wine. 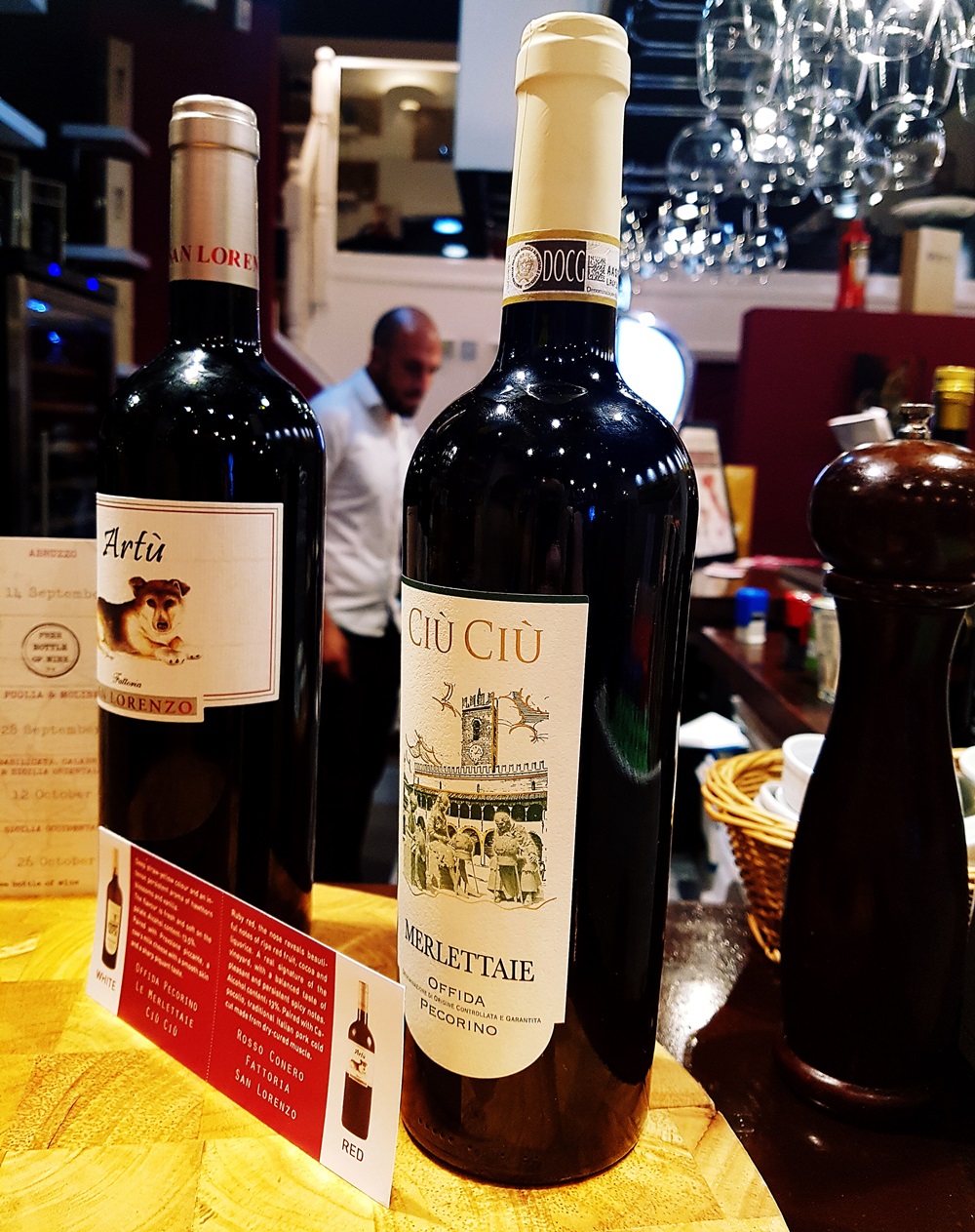 As it happens, last night I’d read an article on the bits of vocabulary you should learn about wine. We decided to go through it as we tasted the wine, and determined it was a sweet, acidic, but well-balanced medium-bodied wine.

According to this it’s a dry wine. We have a ways to go before we become experts.

Nevertheless it was a really lovely white wine – I can usually give or take white wine, especially dry wines. The vanilla-y flavours came through nicely, and while we thought we detected a note of honeysuckle, according to the description it was apparently hawthorn. Who decides these things anyway?

Also I thought Pecorino was a type of cheese not grape!

This was served with a platter of absolutely delicious Provolone piccante which was the stand-out from the evening. I could literally have eaten a whole wheel of it. The crispy breadsticks and tangy capers were a good match for it. 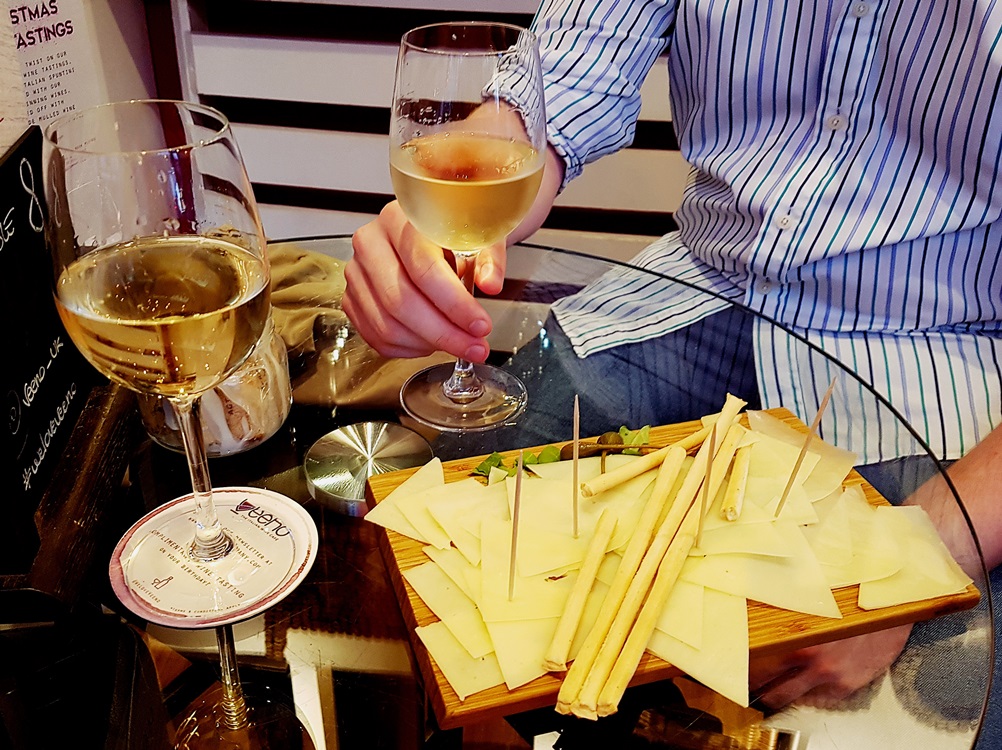 All too soon the delicious cheese was gone 🙁

Our second wine of the evening was a bit more polarising. 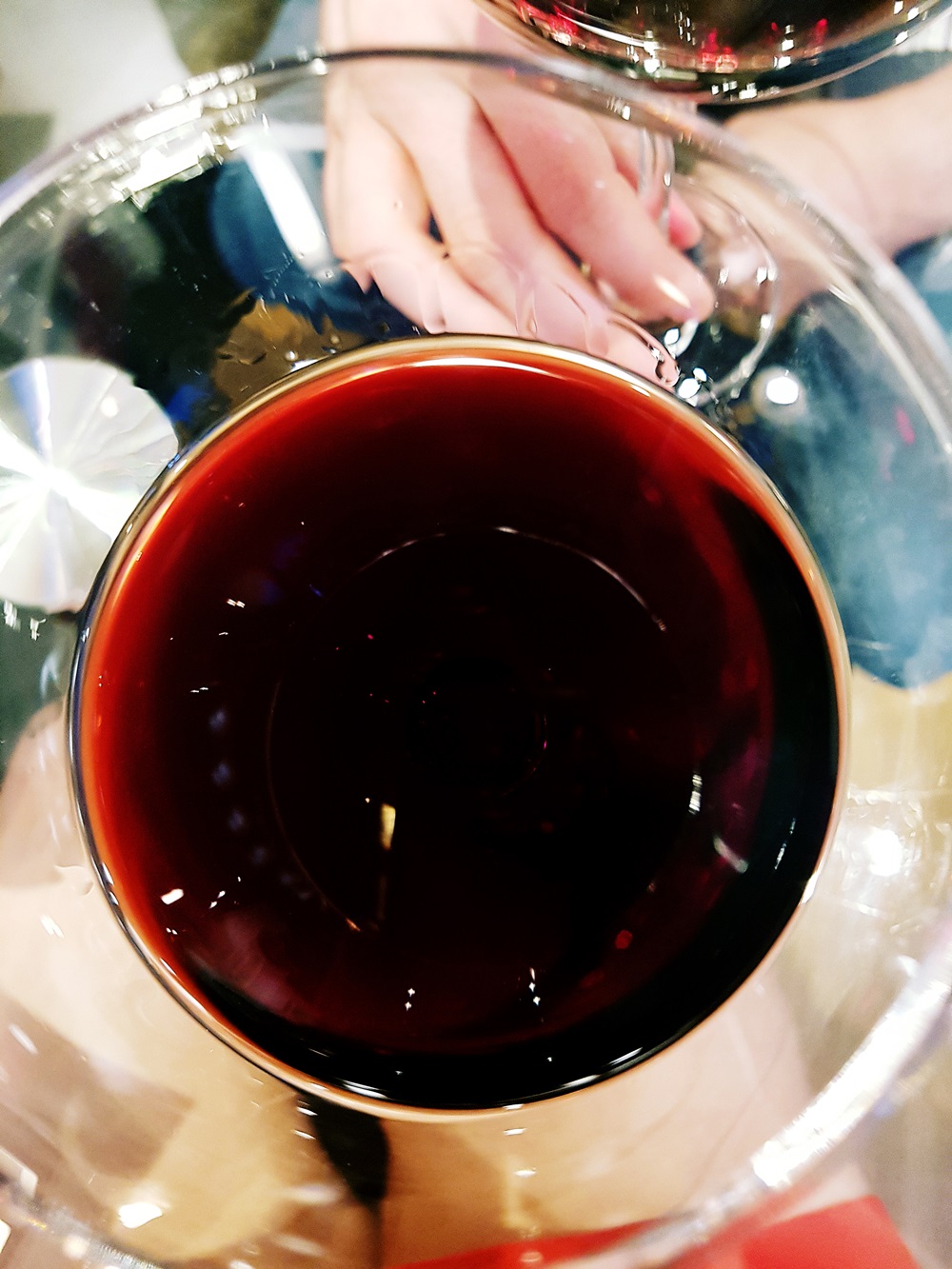 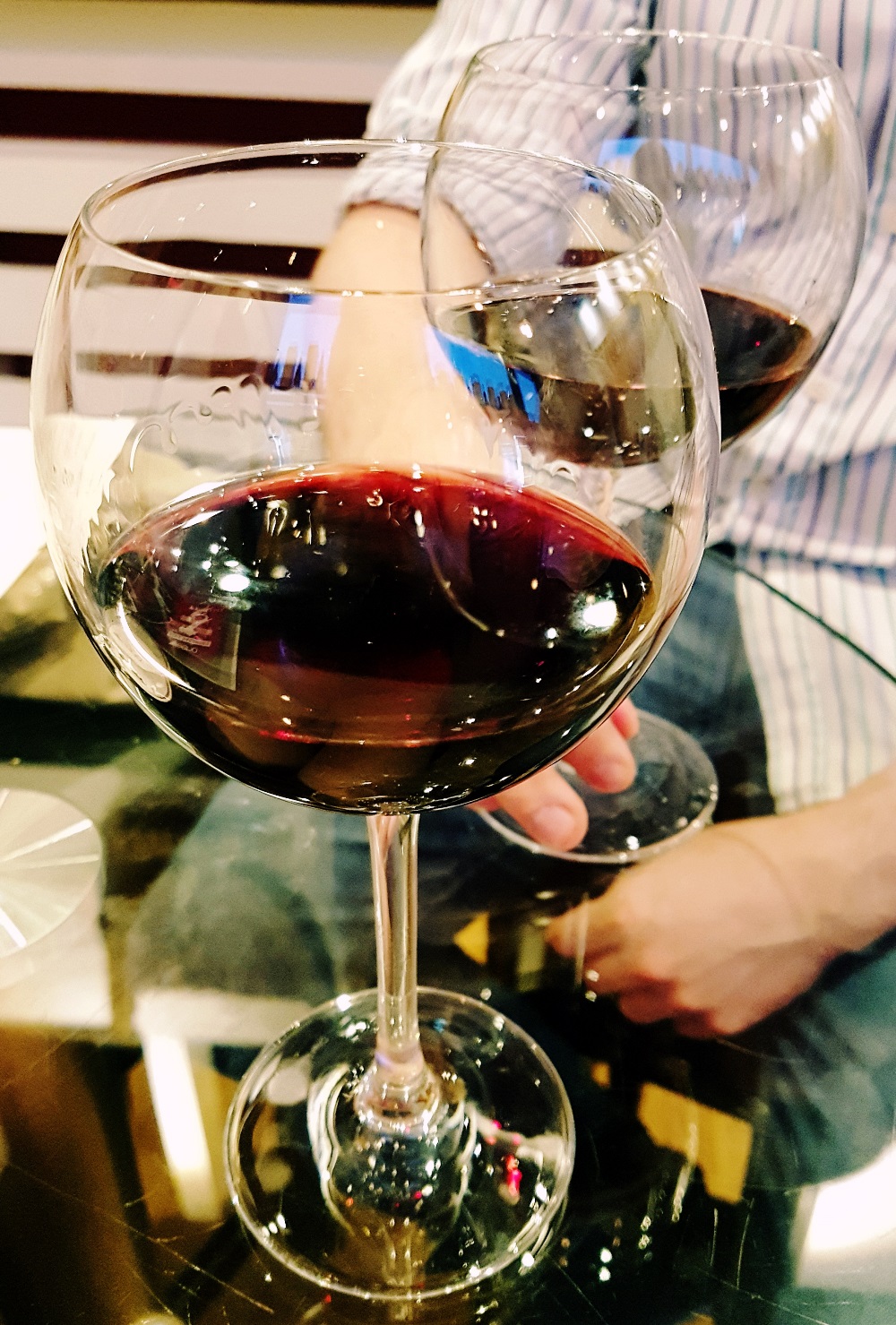 I’m quite fussy about my reds – not a fan of Merlot, Zinfandel or Grenache, but I adore Temperanillo. I wasn’t quite sure if I enjoyed the first sip of our Rosso Conero Fattoria San Lorenzo… and in fact I’m not sure I liked the last either. 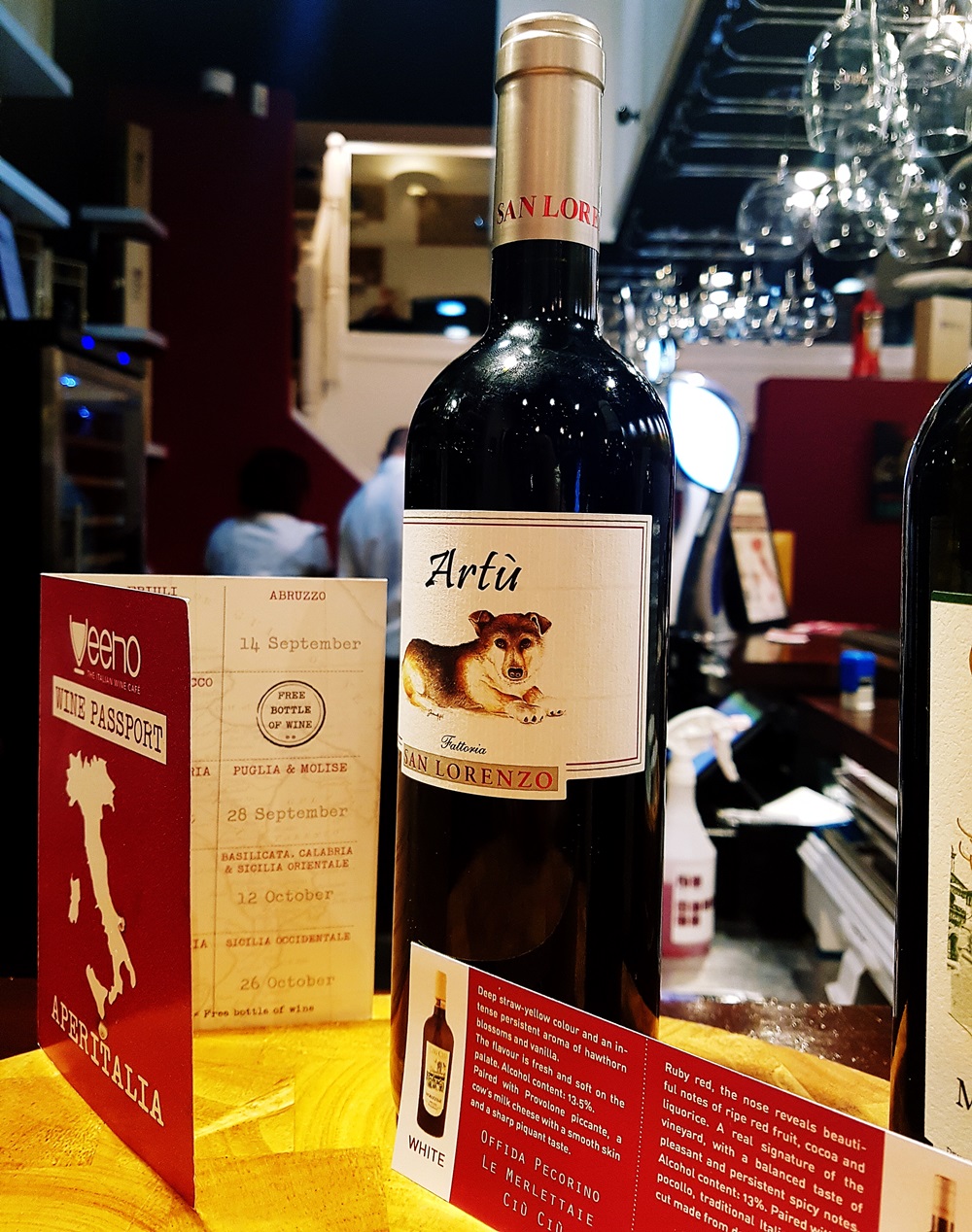 It was quite a peppery wine, in our opinion, although the flavours were allegedly “ripe red fruits, cocoa and liquorice”.

Using the terms we learned from the wine blog, we described it as medium-bodied with a long finish. I also, poetically, described it as “sticking your head into a barrel of soil”, which TC interpreted as meaning it was very earthy with a bit of oakiness. Maybe we’re getting better at this wine tasting thing?

We also guessed it was more alcoholic than the white, which we were also wrong about. We are SO not wine experts.

It was served with some deliciously fatty capocollo, a muscular cold cut of pork, served with toasted bread. It was super yummy, though quite different to your regular cuts of cured meat. That led me onto reminiscing about my visit to Volpetti in Rome, probably the best delicatessen in the world. 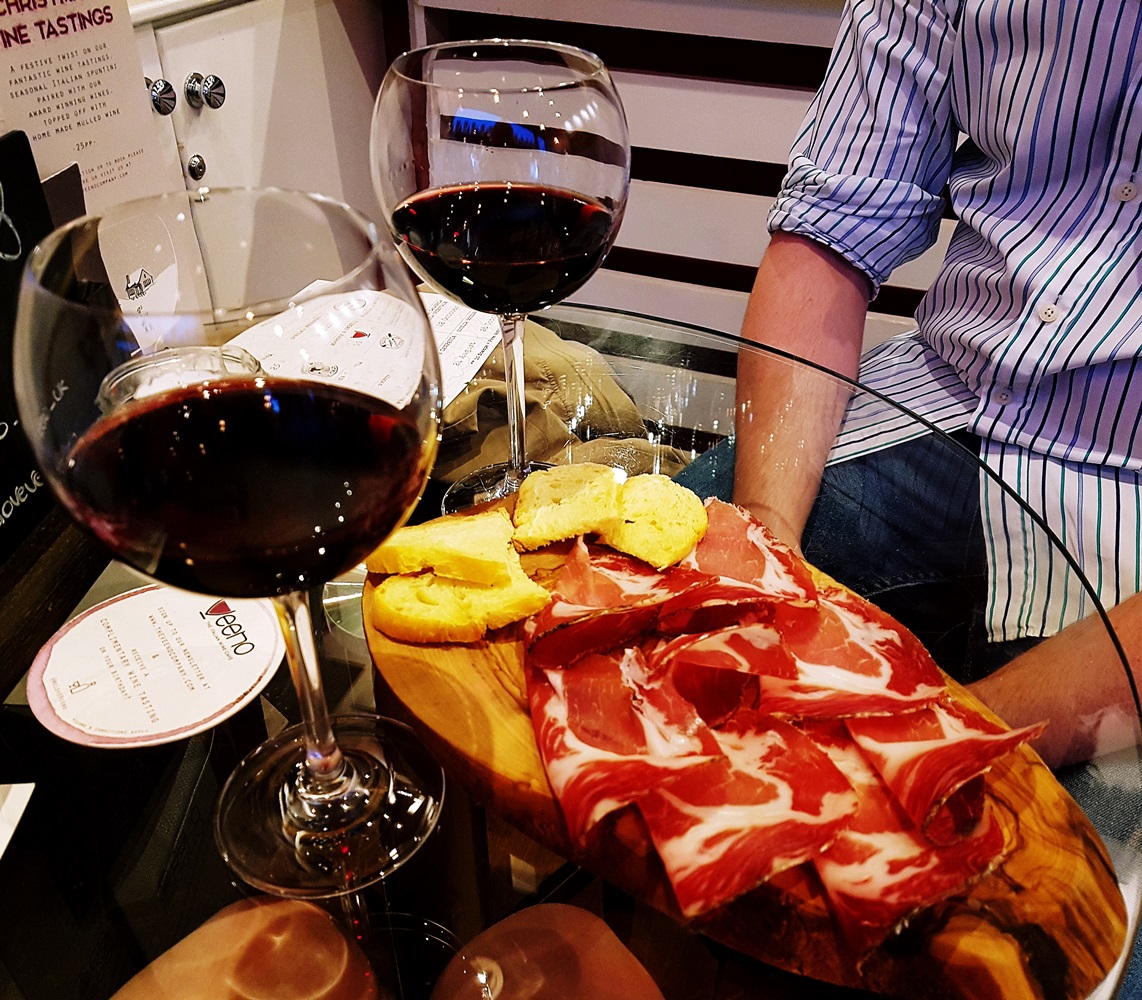 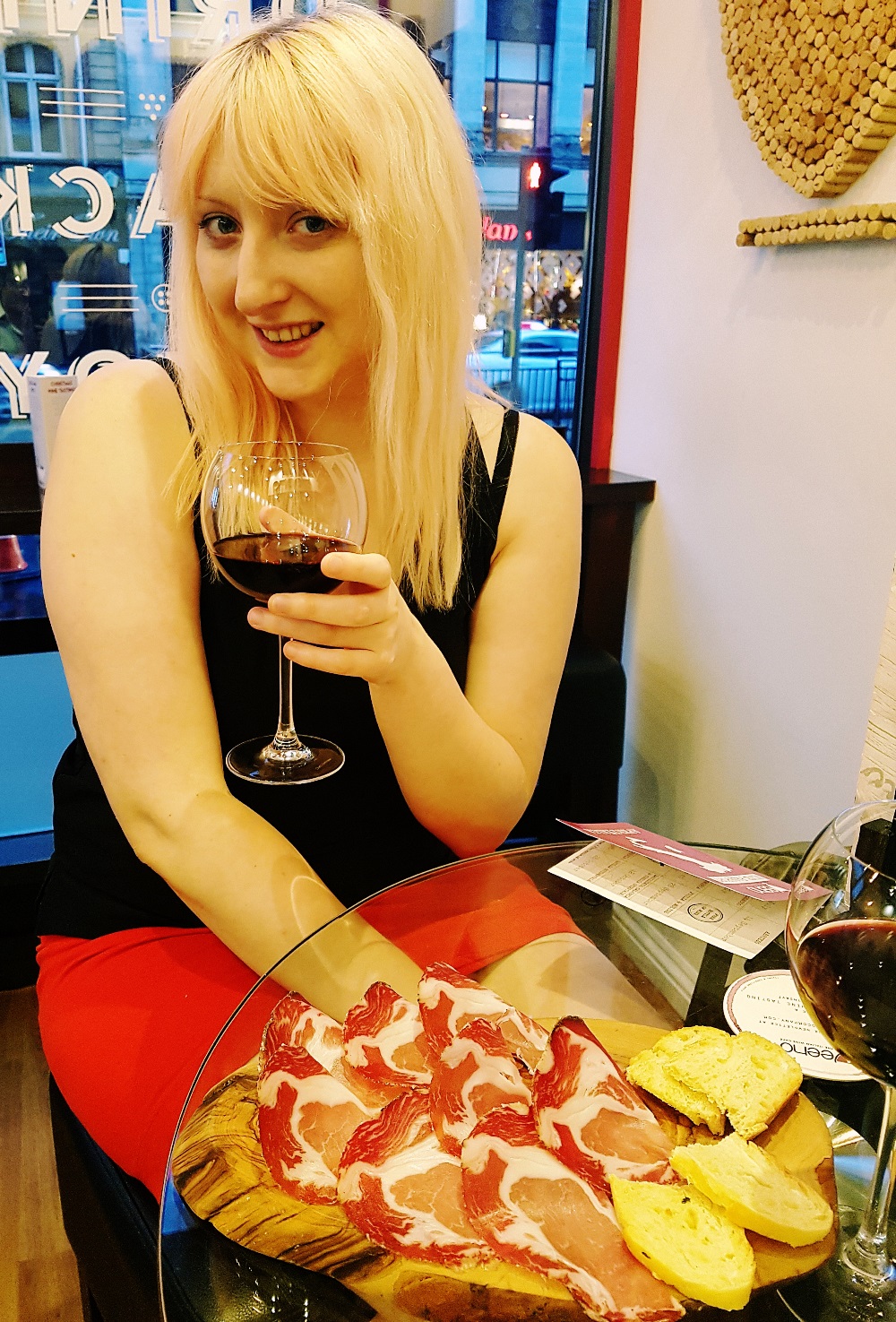 Lost in conversation about the tannins and the structure of the wines, the bar slowly started to empty and we reluctantly devoured the remainder of the ham and drained our wine glasses.

Happily wined up, we headed to Hotel Chocolat to tuck into some dessert. More on that when I manage to make it there for a full meal!

The next Aperitalia event on September 14th features wines from Abruzzo, but TC is working late again – anyone want to go? 😀

Time for another online megagame, and today I'm ch

Earlier this week I started playing Holding On ove

When you can't get outside, bring the sunshine ind

Today on the blog I've suggested ten things that y

Managed to get back into box three of CosyKiller b

It may not have been today. But it's forever. . #t

I've done my monthly recap about April, a full mon

We were supposed to be getting married tomorrow. .

Lost for the first time in our play of Pandemic Le

Missing human faces atm. Not just their faces, I g

Taking part in my second online megagame and my fi

This egg fried rice recipe has been with me since year 8. I remember making it for the first time...